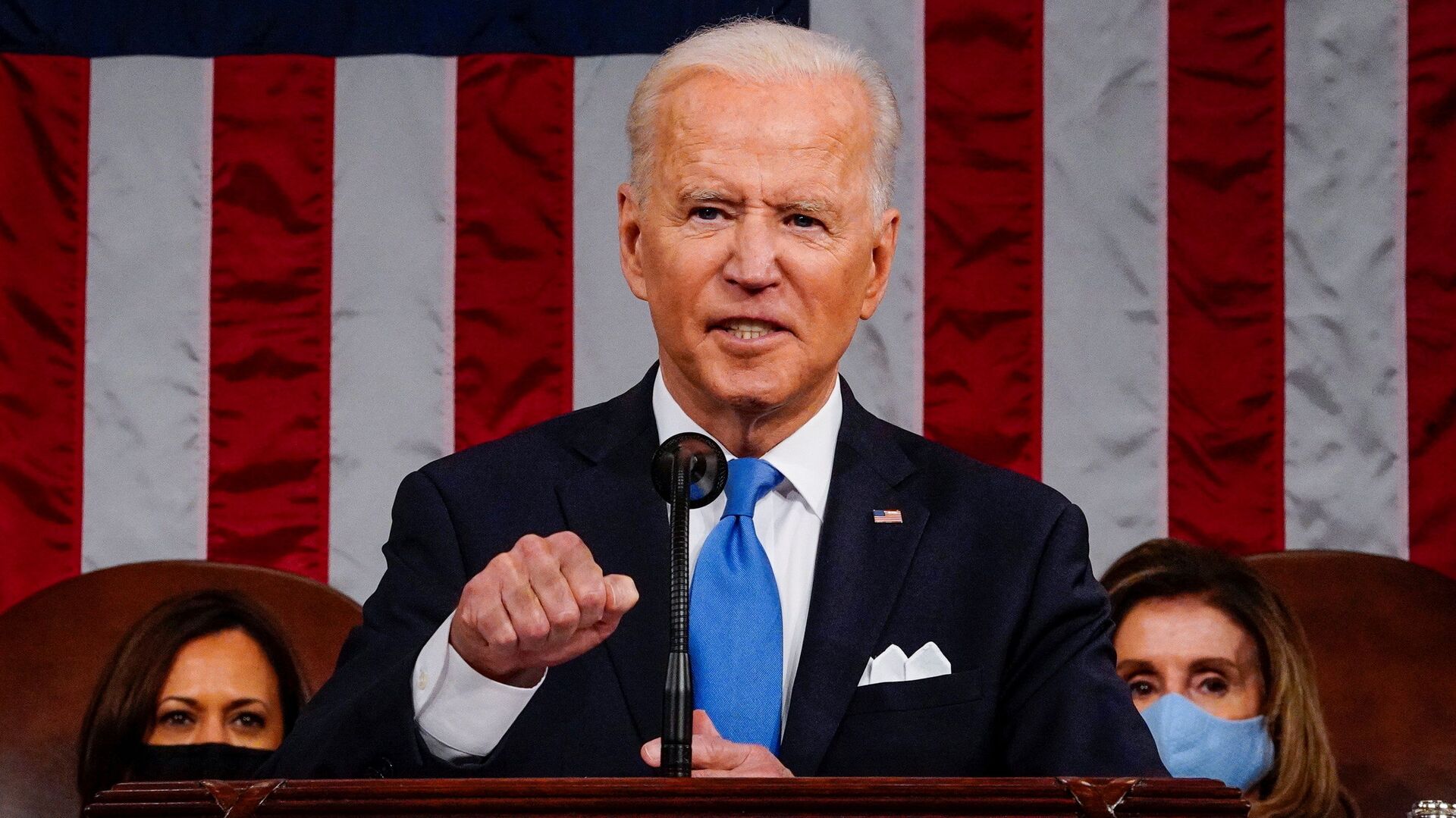 Aleksandra Serebriakova
Moscow-based Sputnik correspondent specializing in foreign affairs.
All materialsWrite to the author
US President Joe Biden, who will mark his 100th day in office later this week, delivered his first address to a Joint Session of Congress, expectedly launching an indirect attack on the previous administration for the “crisis” he inherited.

Joe Biden has provoked outrage on social media: his speech to Congress dubbed the 6 January Capitol storming “the worst attack” on American democracy since the Civil War.

The president took the stage in the Capitol building to argue that almost 100 days ago he had “inherited a nation in crisis” marked by “the worst pandemic in a century” and “the worst economic crisis since the Great Depression”.

He added that America had witnessed “the worst attack on our democracy since the Civil War”, without directly referencing the riot. “Now, after just 100 days, I can report to the nation: America is on the move again.”

This part of his speech in particular triggered strong emotions on social media.

“January 6 was worse than 9/11?” journalist and The Intercept co-founder Glenn Greenwald asked incredulously on Twitter in a viral thread. “Or Pearl Harbor?”

How about the War on Drugs, mass incarceration and Jim Crow? Were those worse "attacks on democracy" than the 3-hour Capitol riot on Jan. 6?

The assassination of JFK? The interference in domestic politics by the CIA? The list of worse attacks than Jan. 6 is endless.

​“Or the Oklahoma City bombing? Or the dismantling of civil liberties in the name of the Cold War and War on Terror? Or the mass surveillance program secretly and illegally implemented by NSA aimed at US citizens?” Greenwald went on, while decrying the “completely unhinged drama queen script”.

“Biden calling 1/6 the worse attack on America's democracy is a slap in the face to every American who's had to endure the trauma of REAL, past attacks,” she argued. “Also - oh the irony: him being in that chamber, giving that speech, IS the result of one the biggest attacks on US democracy.”

Biden calling 1/6 the worse attack on America's democracy is a slap in the face to every American who's had to endure the trauma of REAL, past attacks.

Also - oh the irony: him being in that chamber, giving that speech, IS the result of one the biggest attacks on US democracy.

9/11 was an attack on our democracy. Flight 93 was headed for the U.S. Capitol, and if not for the brave actions of those on board, it's very possible the building would've been a smoking crater. Instead, it crashed in a field ~20 minutes from DC, & all 40 passengers & crew died. https://t.co/OsGkeXWa7m

The Capitol riot was very bad. Let's get serious about American history tho.

overall Biden's speech contained a lot of things I liked, however, the whole "this is the worst attack on American Democracy" thing was silly considering that 9/11, Pearl Harbor was much much worse.

Joe Biden's White House released a preview of his introductory part of his speech. He will state that January 6th is the biggest attack on our democracy since the Civil War. So, let's see, Pearl Harbor and 9/11/2001 don't count? That is expected to be the first of several lies

In an excerpt released by the White House from Biden’s planned speech to a joint session of Congress tonight, which one does Joe Biden call "the worst attack on our democracy since the Civil War?"

Two people died directly as a result of the Capitol building raid on 6 January while the Congress was about to certify the Electoral College results - a Capitol Police officer and a 35-year-old military veteran, Elizabeth Babbitt. Three others deaths are commonly attributed to the event: Rosanne Boyland, 34, died of an amphetamine overdose during the riot; Kevin Greeson, 55, suffered a heart attack outdoors on the Capitol grounds, and Benjamin Philips, 50, who  didn't participate in the raid but attended the preceding 'Stop the Steal' rally, died of a stroke at the hospital at 10:30 in the morning.

The storming followed then-President Donald Trump’s rally outside of the White House denouncing Joe Biden’s victory in the November presidential election. Although Trump called on the rioters to go home in peace during the violent upheaval, he was later impeached by the House of Representatives for inciting the riot with his words and claims on social media denouncing the result of the vote. He was later acquitted by the Senate.