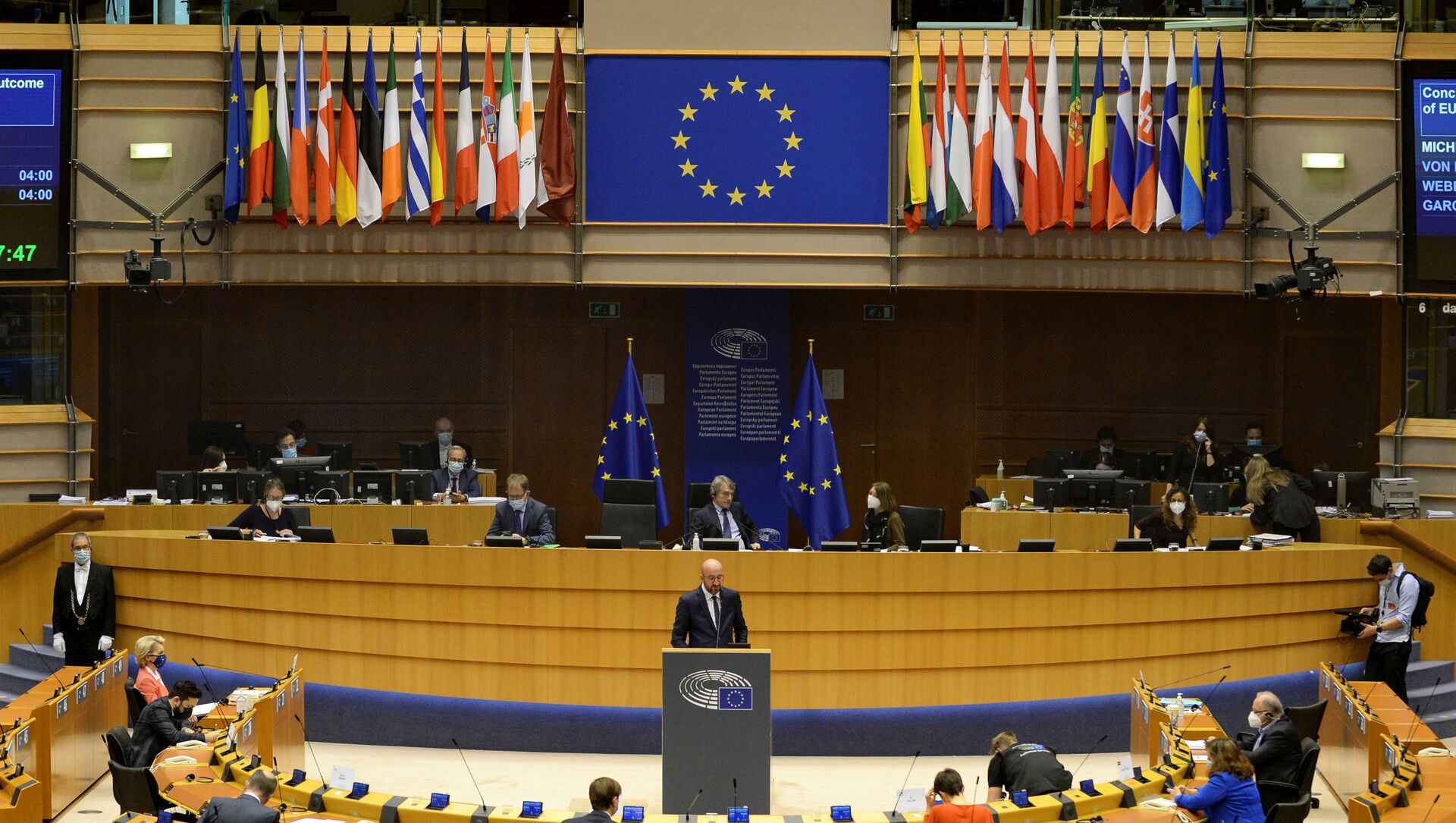 Ilya Tsukanov
All materialsWrite to the author
The resolution, which recommends cutting Russia off from SWIFT, halting the purchase of Russian energy, and other tough measures, was tabled by a group of Eastern European lawmakers in the European Parliament. Along with claims that Russia may be preparing to "invade Ukraine," the resolution goes on to blame Moscow for a litany of other crimes.

The European Parliament in Brussels has passed a resolution threatening a series of tough anti-Russian measures in the event of a Russian "invasion" of Ukraine.

The measure, tabled by MEPs hailing from Poland, the Baltic states, and Romania, was passed on Thursday with 569 of the legislature's 705 members voting in favour, while 67 opposed, and 46 abstained.

Along with threatening to disconnect Russia from the SWIFT payment system and completely halt the purchase of Russian oil and gas, the resolution states that "all assets in the EU of oligarchs close to the Russian authorities and their families in the EU" would be frozen and their visas cancelled if Moscow invaded its western neighbour.

A five-page draft of the resolution made available on the European Parliament's website a day earlier accused Moscow of a wide array of evildoing going back to the early 2000s, from "human rights abuses" and the jailing of opposition vlogger Alexei Navalny to corruption and an alleged "internal war on its own people" by the Kremlin via "the systematic oppression of the opposition." The Skrpial incident is also mentioned, so too election meddling, "propaganda and disinformation in the Russian press and its malicious spread to the EU," a host of "destabilising and subversive actions in Europe," and even "aggressive" behaviour by the Russian military while manoeuvring inside its own borders. Moscow is also blamed for the 2014 explosions at a Czech arms depot.

While it blames Russia for the Ukraine conflict, the resolution makes no mention of the EU's role in assisting the United States in instigating the Ukraine crisis in late 2013 and early 2014, nor the February 2014 coup d'etat in Kiev, which eventually led to Crimea's referendum to split off from Ukraine and rejoin Russia, a bloody civil war in the country's east, and the collapse of centuries of close ties between Kiev and Moscow. 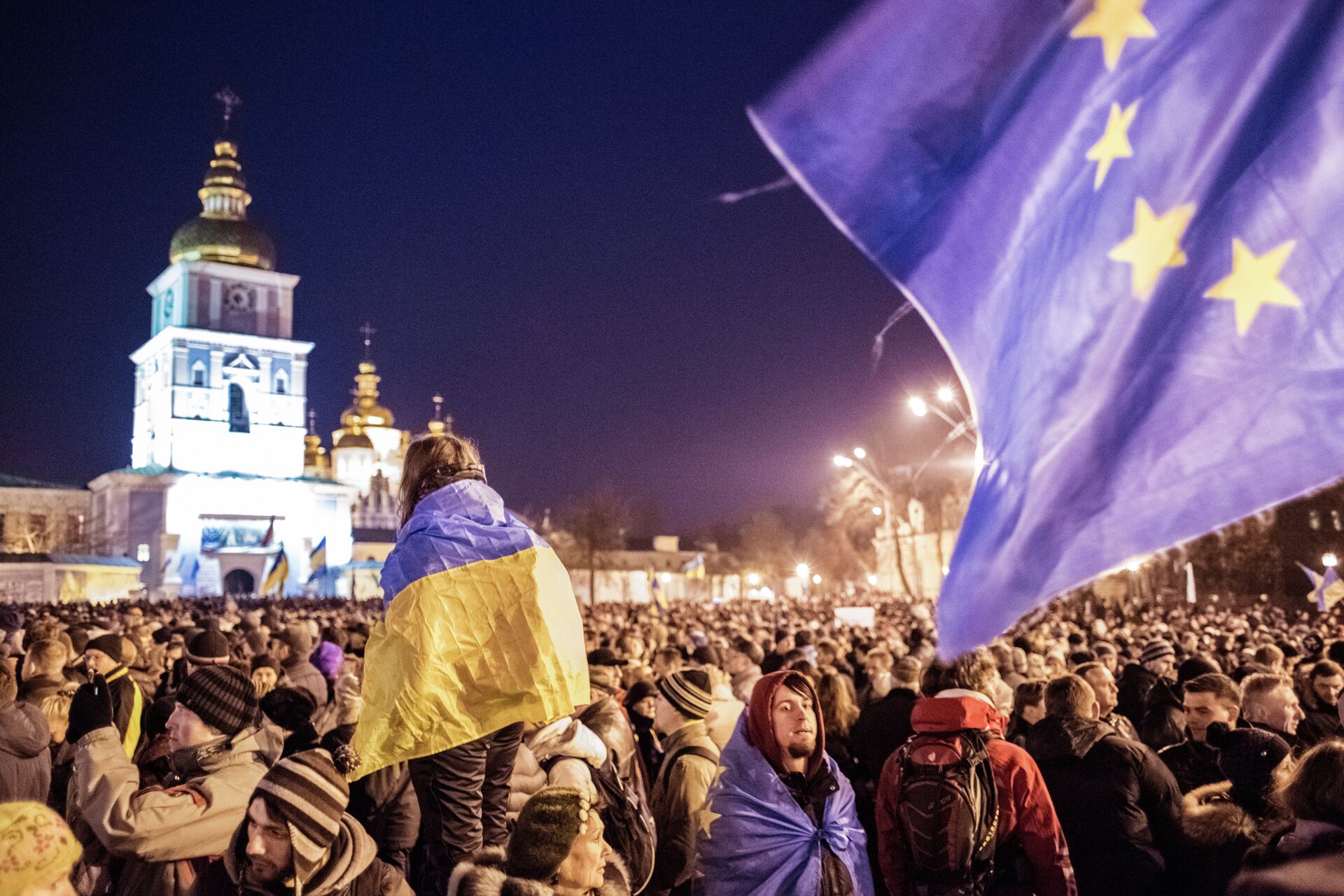 The resolution also calls on Russia "to implement the provisions of the Minsk Agreements" facilitating an end to the Ukrainian civil war, despite the fact that Moscow serves only as a guarantor of the 2015 treaty seeking to end the war between Kiev and breakaway forces in the country's east by granting them broad autonomy. Moscow has long blamed Ukrainian authorities for failing to make good on their commitments under the treaty regarding autonomy, with legislators in Kiev failing to table the necessary legislation in the Rada parliament over six years after the Minsk Agreements were signed.

Lavrov on Bulgaria's New Claims: They Could Also Accuse Us of Killing Franz Ferdinand
In a broadranging interview with Sputnik on Wednesday, Russian Foreign Minister Sergei Lavrov pointed to Ukrainian President Volodymyr Zelensky's "shameful" statements about the Minsk agreements being "useless," and rejected any attempt to renegotiate the accords, warning that doing so would lead to a massacre in the Donbass breakaways.