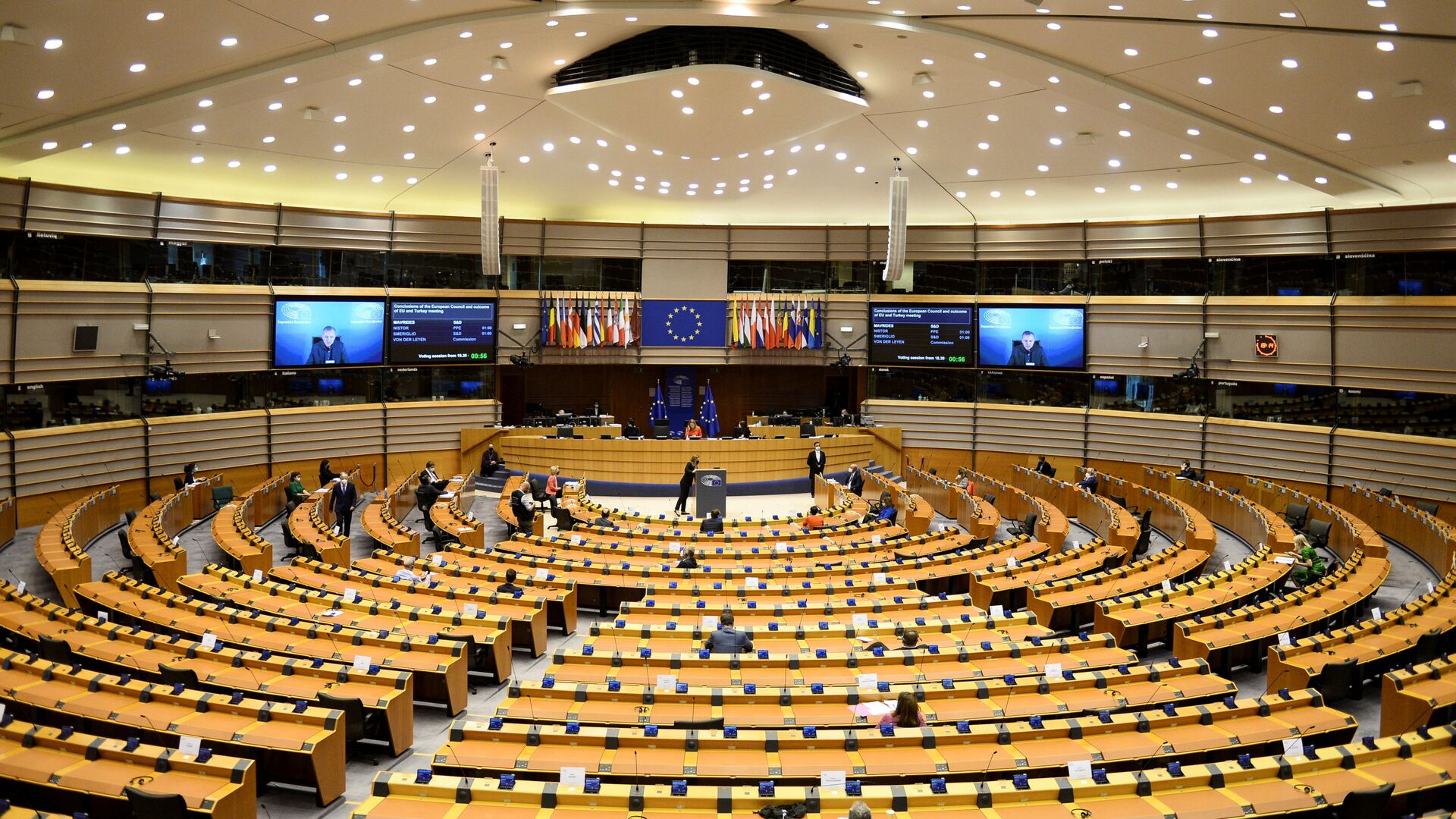 Ilya Tsukanov
All materialsWrite to the author
Tensions in war-torn eastern Ukraine between Kiev and the breakaway Donbass republics escalated this spring after the Ukrainian government mobilised its troops, prompting Donbass leaders to express fears of a general offensive. Moscow, which serves as a guarantor of the Minsk peace agreements, has urged calm and warned Kiev against any escalations.

Over 50 European Parliament lawmakers have tabled a resolution proposing disconnecting Russia from the SWIFT payment system and halting the purchase of Russian oil and gas supplies if Moscow's alleged "aggression and continued destabilisation of Ukraine, hostile behaviour towards and outright attacks on EU member states and societies" escalates into military action.

In a draft resolution tabled on Wednesday "on Russia, the case of Alexei Navalny, the military build-up on Ukraine's border and Russian attacks in the Czech Republic," the group of mostly Eastern European lawmakers suggested that if the current tensions over Ukraine turn into an outright Russian invasion, imports of "oil and gas from Russia to the EU [must] be immediately stopped, while Russia should be excluded from the SWIFT payment system, and all assets in the EU of oligarchs close to the Russian authorities and their families in the EU need to be frozen and their visas cancelled."

The resolution does not clarify what might provoke Russia to "invade" Ukraine. Moscow has repeatedly urged the current government in Kiev to make good on its commitments under the Minsk peace accords.

The resolution goes on to blame Moscow for the deterioration of the security situation in eastern Ukraine, and criticises Russia for suspending "the right of innocent passage for warships and commercial vessels" through the Kerch Strait until 31 October.

Calling opposition vlogger Alexei Navalny "Russia's best known anti-corruption activist and opposition politician," the resolution demands his immediate release, and calls for an investigation into the alleged "poisoning" and "assassination attempt" against him. Navalny was imprisoned after returning to Russia in January over breaches of probation to his suspended sentence in a 2014 fraud case.

Russian Opposition Figure Navalny Files Three Lawsuits Against Prison
The resolution goes on to accuse Russia of a litany of crimes, including election meddling, "the use of disinformation, deep fakes, malicious cyberattacks, sabotage and chemical weapons," and the latest claims of Russian involvement in arms depot blasts in the Czech Republic, and urges the EU to "reduce its dependence on Russian energy," stop the completion of the Nord Stream 2 pipeline project and cancel multi-billion-dollar nuclear power plant construction projects with Rosatom.

Relations at Low Point and Could Get Worse

Also on Wednesday, European Union foreign policy chief Josep Borrell told reporters that relations between Moscow and Brussels were at a "low point" and could deteriorate further in the future. Borrell accused Russia of "pretending" to be a neutral mediator in the conflict in eastern Ukraine, and claimed Moscow was not interested in the realisation of the Minsk agreements.

"Up to now, Russia has shown no willingness to end the conflict on terms that would safeguard Ukraine's sovereignty, territorial integrity and independence. For Russia, the full implementation of the Minsk agreement is not a key condition. For us, it is," he alleged.

Lavrov Warns Reversing Minsk Agreements Could Lead to Massacre in Donbass
Under the terms of the Minsk accords, signed in early 2015 in the Belarusian capital after months of brutal fighting between Kiev forces and militias in the regions of Donetsk and Lugansk, the breakaways would return to Ukrainian jurisdiction in exchange for broad autonomy. The two sides made good on their promises to halt fighting and move heavy military equipment away from the line of contact, but the agreement's implementation has since been stalled, with Ukrainian lawmakers refusing to proceed with the legislation to grant the Donbass autonomy.

Earlier on Wednesday, in an interview with Sputnik, Russian Foreign Minister Sergei Lavrov accused Western nations of trying to convince Moscow to "soften" the Minsk accords and to change the sequence of the implementation of its provisions, and warned that doing so would lead to a massacre of its residents.