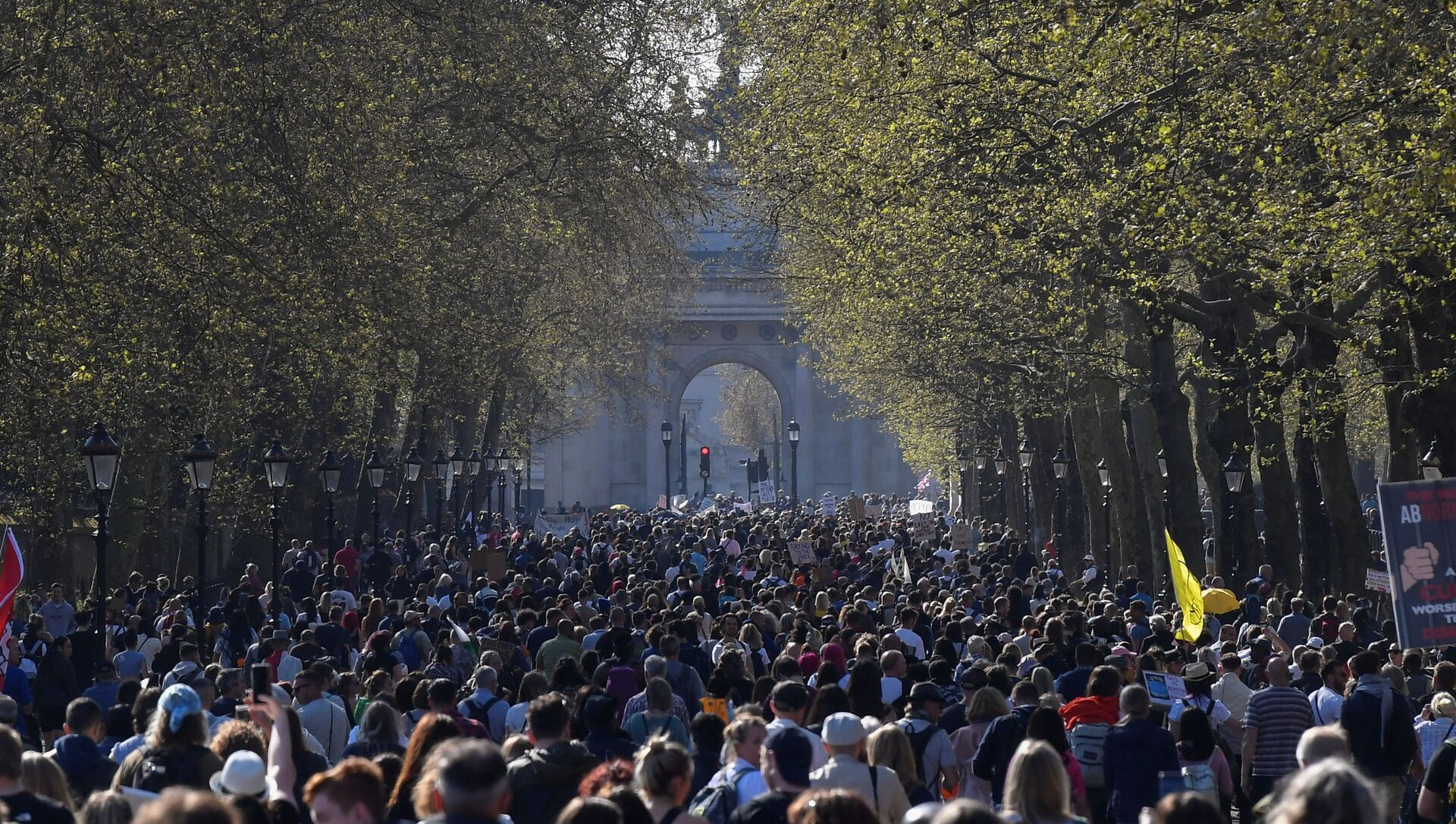 Neil Clark
All materials
There was a huge turnout for Saturday’s peaceful march against lockdowns and vaccine passports in London, with people from all walks of life attending, but media coverage was either non-existent, dismissive or hostile, proving it was clearly a protest the power elites disapproved of.

On Saturday, along with tens of thousands of other people I attended the ‘Unite for Freedom’ march in London. It was the first time I had been amongst a large crowd  since Cheltenham Gold Cup Day 2020, just before the first lockdown, and it felt absolutely great. It was wonderful to be in a mass of humanity again and to meet and talk to some very nice people. Man is a social animal: only misanthropes and billionaire computer software tycoons love lockdowns.  ‘Only connect’, as E.M. Forster would have said: Live in fragments no longer.

​Laurie, a university student and part-time DJ, had travelled from Bristol. Jon was a New Yorker who‘d been on anti-Vietnam war marches with his Dad in DC back in the 60s. There was Miguel and Russ, who had come from Essex with his Mum. There was Tara from south-west London. A group of very cheerful ladies had travelled together from Cwmbran in south Wales. Another DJ called Morgan, who I called ‘Morgan the Music’. I saw James and Dick Delingpole too, who have been absolutely heroic in the trenches these last 12 months. You really couldn’t have come across a more eclectic mix of people.

'Unite for Freedom' Protests Against COVID Restrictions Held in London

The march- rather like France’s Yellow Vest movement- transcended elite-encouraged divisions of ‘left’ and ‘right’.

Youngsters marched along with a 100-year-old man.  People of all colours, from all backgrounds,  protesting against lockdowns, against Vaccine Passports and for a return of normal life, which was snatched away from us in March 2020 on what we were told was a purely temporary basis- but which still hasn’t been returned.

​But the march - while a joyous one to be on-attracted an extraordinarily venomous response from some quarters.  And the desperate and rather unhinged nature of the attacks tells us quite a lot about how rattled the pro-lockdown Establishment must be at how many people actually turned up and how opposition to the anti-human ‘New Abnormal’ is increasing.

You can tell pretty easily if a public demonstration is one the powers-that-be and their petit-bourgeois  ‘narrative managers’ disapprove of.

First, there is a downplaying of the numbers. Saturday’s march was the largest demonstration I have seen since the one before the Iraq War - which I also attended.  As the data analyst and citizen journalist Philip Watson commented ‘So great were the numbers in attendance that none of the footage was able to capture the beginning and end of the crowds that thronged the streets, a feat that even an airborne drone couldn’t accomplish’.

But incredibly - or perhaps not so incredibly- there was no mention of it on the BBC News website, nor apparently was there any mention of it on the main ITV news bulletin. To find a factual report on a major  broadcast news outlet of a huge march in central London on Saturday evening, Brits had to go to Russian media!

What coverage there was of the march was scornful. Again, as with anti-war demos- the tactic deployed to discredit was to find one banner, or badge, from among the many thousands of people marching to try and smear the entire protest.

At an earlier anti-lockdown rally, the very brief and rather suspicious unfurling of a British Union of Fascists flag at Trafalgar Square by persons unknown just happened to be captured on film, and quickly went viral-with the aim of tarnishing all the protestors-who were actually denouncing fascism- with the fascist brush.

On Saturday, the same thing happened again, with this time the smearers’ focus being on one large banner which declared ‘Covid is a Hoax’ and two people (out of perhaps half a million) wearing yellow stars.

Marianna Spring, the BBC’s ‘Disinformation’ reporter’s very biased take on the march was: ‘Anti-lockdown protesters - predominantly organised in Telegram channels promoting conspiracy theories about vaccines and pandemic are marching in Central London. There are placards claiming covid is a hoax, “the experimental vaccine kills” and the QAnon “Save Our Children”. Spring also dismissed the numbers marching as just  ‘a few thousand’- which was patently absurd.

When I criticised her tweet (it absolutely didn‘t give a fair and balanced picture of the demonstration), she blocked me.

Then there was the gas-lighting. We’ve been gas lighted for the past 13 months in the UK, but at the weekend it was so bad even Jack Manningham, the original gas-lighter in Patrick Hamilton’s play, would have said ‘This is going too far’.

Repeat after me: ‘Those protesting against lockdown and Vaccine Passports in London are Very Bad People.’

​Those hysterically claiming that the protestors were ‘Covidiots’, who would be ‘super spreaders’ of the virus seem to have conveniently forgotten that Sir Patrick Vallance told MPs only in March that protests elsewhere had not led to a spike in infections. ‘It is the case that it is difficult to see how things like large beach gatherings and so on can cause a spike. The same was the case in a protest march in New York; they did not really see any spikes after that‘, the Deputy Chief Medical Officer said.

Yet on Saturday hardcore Covid zealots were again accusing street protestors in London of being a major threat to public health!

Linked to the gas-lighting is the hypocrisy. Protests are a threat to public health - but only if they’re protests we disagree with. If we support the cause, loads of people can gather in contravention of ‘Covid regulations’ and it’s all fine.

Dear Everyone Marching in Oxford Street, Please go home, switch on the news and look at the footage coming out of India. That is what happens when the virus overruns a health system. We’ve been trying so hard to stop that happening here. Don’t piss on all our chips. Ta.

Yet a month earlier the same Sue Perkins (or perhaps it was her twin sister), had shared an image of the large vigil for Sarah Everard (held during lockdown) without  negative comment.

​It brings to mind how Tory MP Tobias Ellwood, a Lieutenant Colonel in the 77th Brigade, had lauded BLM protestors in the summer,  tweeting: ‘Moving to see this powerful and peaceful demonstration of solidarity outside Westminster right now. Scenes like this are happening across the world. Politicians must listen", just 48 hours after he had tweeted: ‘We need to fix this-ASAP’ above a photo of a crowded beach in the south-west.

What the last 48 hours has shown us is the scarcely disguised (if it is disguised at all) loathing that  ‘Inside the Tenters’ have for ordinary members of the public when they have the temerity stand up for their rights and challenge hegemonic Establishment-friendly narratives.

As the Tweeter  ‘AntiWokeBritain’ put it: This is the UK MSM ‘basket of deplorables’  moment. Covid-19 has exposed the Elites, parliament and MSM utter disdain for the UK public that doesn’t agree with their narrative. A much needed political reset will now start’

One BBC producer ‘investigating disinfo’ tweeted that the protestors were not ‘very mainstream normal people’.   Even more offensive was the response of a comedian called Dom Joly who labelled the marchers: ‘A Confederacy of Cxxts’. Hint: the word I’ve blanked out is not ‘carts’.

Well, on Saturday in sunny London I met no ‘cxxts’, just ordinary decent, very mainstream normal people who have had enough of lockdowns (and the tremendous harm they do), lying politicians and a media and mutually admiring-chattering class which only seems interested in promoting one point of view and denigrating those who dare to think differently.

As I read the attacks on the marchers, it reminded me of the way demonstrators against the Bush-Blair Iraq war- which led to up to 1m deaths- were disparaged back in 2002/3. We had ‘blood on our hands’ then, too. We were called ’Saddam apologists’ and indeed every name under the sun by the gatekeepers.

But who did history prove right? The protestors or those mocking them?