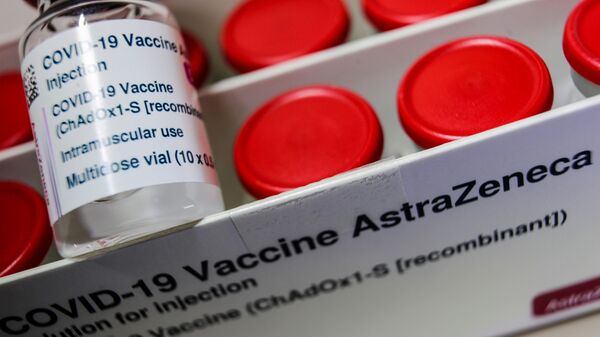 The global coronavirus tally is now well over 145 million cases, with the death toll surpassing 3 million, according to Baltimore, Maryland's Johns Hopkins University that tracks data on the pandemic.

Meanwhile, Mexico has the third-highest death toll on the planet, with over 214,000 fatalities and almost 2.3 million infected.

Tens of thousands of people without face masks on marched in central London on Saturday to protest against the COVID-19 lockdown measures and vaccine passports, a Sputnik correspondent reported.

Chanting "freedom" and holding placards reading "Medical apartheid is wrong," "Not to vaccine passports" and "This is Tyranny," the protesters took to the streets in open defiance of the coronavirus rules still in place and the Metropolitan Police advising people not to attend any large gathering.

"This is all about freedom," a young man carrying a placard reading "No vaxx passports. I do not consent" told Sputnik as the several hundred-metre-long march was reaching Parliament Square.

According to Dan, as the protester identified himself, he has nothing against people getting the COVID-19 vaccine, but he also believes that the government's intention to use COVID-19 certifications to access entertainment and sporting events, and eventually to travel abroad, is discriminatory.

The massive Freedom March, as its organiser called it, started in Hyde Park, went through Oxford High Street, the Embankment, in the north bank of Thames river, and Parliament Square before returning to its point of departure, where the crowd listened to live music in a festive atmosphere.

Lockdown restrictions in England began easing on 8 March with the reopening of schools, and since April 12 pubs and restaurants were allowed to serve clients in outdoor seating areas.

Up to six people from two different households are allowed to meet outdoors, as part of the government's roadmap out of the lockdown which, according to the UK Prime Minister Boris Johnson, will see all legal limits on social contact removed by June 21 at the earliest.

Absolutely enormous crowds on the anti-lockdown protest march in London. These are normal folk who are concerned about their jobs, livelihoods, freedoms and protesting for a return to normality and an end to authoritarianism.#londonprotestpic.twitter.com/dENo0e6x2g

Massive crowd takes to the streets of London in anti lockdown protest pic.twitter.com/M5G0U13QOE

Senior Belgian health officials agreed on Saturday to limit the use of the AstraZeneca vaccine against the coronavirus to those aged over 40, media said.

The small European kingdom paused the vaccine rollout among people under 56 for several weeks amid concerns that it caused rare blood clotting and low blood platelets in younger patients.

Those who have already received a shot of the two-dose vaccine will be injected again in due time regardless of their age, the RTBF news website reported.

The use of the Johnson & Johnson vaccine was delayed at the US company's request in mid-April, following reports of adverse blood clotting events, and will resume next week for all age groups.

The next batch of Sputnik V just arrived in Venezuela. pic.twitter.com/EhWPG2C2T8

A vaccine error in a small northern French town of Epernay led 140 patients to be administered saline solution instead of the Pfizer/BioNTech vaccine against the coronavirus, media said.

The authorities in Epernay in the Marne department conducted a probe into the Tuesday incident but did not disclose the reason for the mix-up, according to the France Bleu radio.

Saline solution is a harmless mixture of salt and water that is similar to body fluids. Some patients who were injected with it have already received a Pfizer shot, while others have an appointment scheduled for Wednesday.

A total of 33,508,590 have received a first vaccination dose, according to the government data.

"I thank Serbian brothers for giving me the opportunity to reclaim my freedom, along with hundreds of thousands of foreigners. Here, life has returned, everything is open, everyone is vaccinated", the former minister tweeted, attaching a photo of him receiving the shot.

According to Greek media, Serbia is a welcome destination for the so-called vaccination tourists.

Since Serbia is not an EU member and, therefore, is not bound by the same vaccination agreements, the country was able to place orders not only for the vaccines by AstraZeneca and Pfizer/BioNTech but also Sputnik V and the Sinopharm vaccine.

The country with a population of 7 million has purchased a total of 15 million vaccines, which has resulted in a surplus that Belgrade decided to share with neighbors and citizens of other countries.

"Over the past day, 8,828 coronavirus cases were confirmed across 82 Russian regions, including 1,158 cases (13.1 percent) without clinical symptoms", the centre said.

The Jaipur Golden Hospital in Delhi has reported it lost twenty patients due to a shortage of medical oxygen, a top official at the hospital said today. Over the past three days, several hospitals have flagged a crisis of oxygen supply, beds, and medicines amid rising coronavirus cases.

"You can just walk up and get vaccinated", Mayor Bill de Blasio said on Friday, as quoted by NBC News, adding that "this approach is exactly right for this point as we continue to move forward. A lot of people just want it to be convenient and easy".

The city earlier introduced a pilot walk-in programme for older residents and there are over 30 walk-in coronavirus vaccination sites open in New York.

"The sites, which will be located in all five boroughs, will each receive a total of 400 doses for the duration of their existence, including doses set aside for the workers. The sites are open to all eligible New Yorkers, but only bodega, grocery store, and supermarket workers with proof of employment can walk in to get vaccinated", the statement on the governor’s website says.