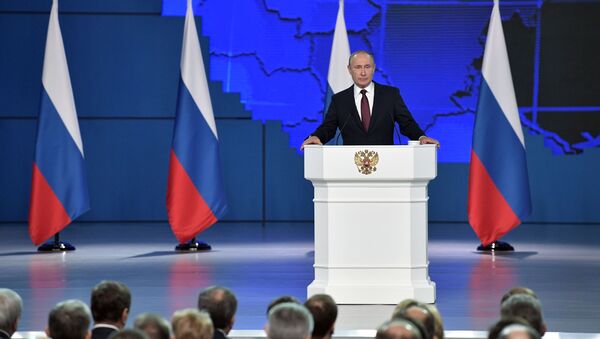 Aleksandra Serebriakova
Moscow-based Sputnik correspondent specializing in foreign affairs.
All materialsWrite to the author
The event, broadcast live by Russia’s main TV channels, is traditionally attended by lawmakers from both houses of the Federal Assembly, cabinet members, regional governors as well as distinguished guests.

Vladimir Putin is delivering his annual address to the nation's parliament in Moscow on Wednesday; this will be his 17th time doing so during his presidency.

Due to the pandemic, only 435 journalists were accredited to attend the event this year, down from 885 in 2020.

The speech is set to outline national priorities for the year ahead, setting objectives to restart the economy and raise living standards as the country emerges from the pandemic crisis.

The president's address to the Russian parliament lasted 78 minutes; he had been projected to speak for one hour but spoke almost 20 minutes longer.

At the start of his speech, Vladimir Putin noted that it would mostly be devoted to domestic issues. The president spent a large amount of time talking about Russia's economy, its recovery from the global coronavirus pandemic, healthcare and the provision of additional financial support to Russian families.

The president also urged the world to refrain from provoking the country and crossing "red lines". He said that it had become "kind of a sport" to try to "cling" to Russia and make "groundless" accusations targeting it. 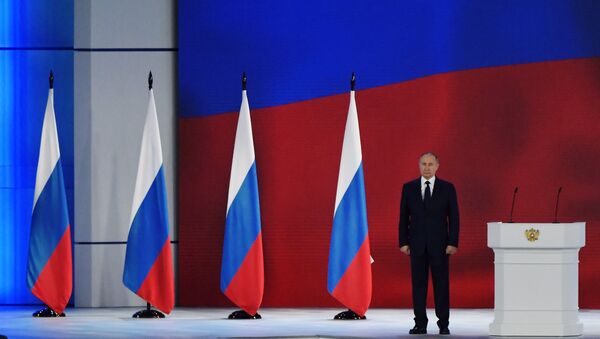 "Russia once again insistently invites partners to discuss issues related to strategic weapons and global stability," the president said. "The negotiations could aim at creating an area for conflict-free cooperation on the basis of a security formula that would cover not only traditional strategic weapons, such as intercontinental ballistic missiles and heavy bombers and submarines, but all offensive and defensive systems capable of performing strategic tasks."

He also pointed out the importance of holding an "in-person meeting" with the heads of the permanent United Nations Security Council members when the epidemiological situation allows.

The nuclear triad is a military force structure consisting of nuclear missiles launched from the land, nuclear-missile-armed submarines, and aircraft armed with nuclear bombs and missiles.

"Western partners are desperately refusing Russia's numerous proposals to establish dialogue in information [security] and cybersecurity. We have repeatedly offered this. They refuse to even discuss the issue," the president said.

Russia's president said that "those staging any provocations that threaten the core interests of [Russia's] security will regret it like nothing before".

Putin expressed hope that no country would dare to cross "red lines" in relations with Moscow, but said that it is Russia that will determine where these lines are, in each specific case. 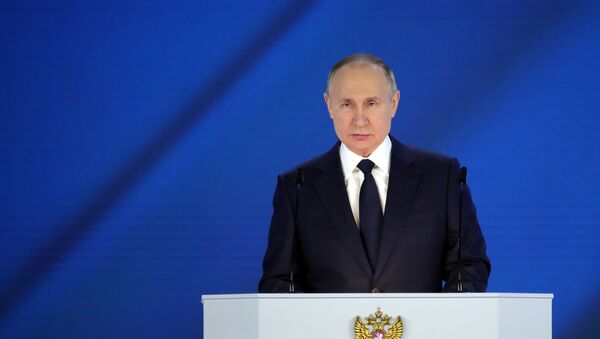 “We see what is happening in real life. As I said, they cling to Russia here and there for no reason. Of course, all sorts of small Tabaquis are spinning around them, like around Shere Khan. Everything is like Kipling writes. [They] howl to appease their sovereign," the president said.

"In some countries, a nasty custom has taken root - to 'cling' to Russia on any pretext. It's like some kind of sport," Putin noted.

According to Russia's president, Moscow wants to have good relations with all the countries but many of them are now used to "groundless" accusations.

"In such situations [of groundless accusations] we behave in the restrained manner, even in a modest manner, we often do not respond at both unfriendly actions, and even outright rudeness. We want to have good relations with all participants in our international communication," Putin said.

"We really don't want to burn bridges. But if someone perceives our good intentions as indifference or weakness, Russia's response will be asymmetrical, speedy and tough," he added.

The Russian president denounced the silence in Western countries about a derailed plot to overthrow the Belarusian government.

"Just nobody seemed to notice this. Everyone pretends that nothing is happening at all," Putin fumed.

Two people from the Belarusian opposition were detained by the Russian internal security agency FSB due to an attempted coup against President Alexander Lukashenko, the organisation said on Saturday.

Lukashenko also said that Belarusian security services have detained a group of people for trying to assassinate him and his family who were backed by the US. The US Department of State denied the accusation as "untrue".

Speaking about the attempted plot, Russia's president said that "the world, unfortunately, seems to have become accustomed to the practice of politically motivated illegal economic sanctions", adding that this is "degenerating into something much more dangerous now".

"The practice of organising coups and attempts to organise assassinations of heads of state is just too much. All boundaries have been crossed," Putin said.

"We need new comprehensive approaches to energy, including new solutions in nuclear power generation, in such prospective areas as hydrogen energy and energy storage," the president said.

"We have to adapt our agricultural sector, industrial complex, public services and all the infrastructure. Create the CO2 recycling industry, aim for a reduction in greenhouse gas emissions through tough control and monitoring."

"Beginning from July 1, children aged from 8-16 raised by single parents will be assigned a monthly stipend. Its average amount will be 5,650 rubles ($74)," the Russian president explained.

According to Putin, school-age children raised by two parents will receive support totaling 10,000 rubles each in one payment in mid-August.

Meanwhile, financially struggling pregnant women in Russia will be monthly allocated some 6,350 rubles, according to the president's proposal.

Environmental protection is a key issue right now, Putin said, urging that air emissions in the 12 largest industrial centres must be reduced by 20 percent.

According to Russia's president, the country's government will promote private investment to support the creation of new jobs. 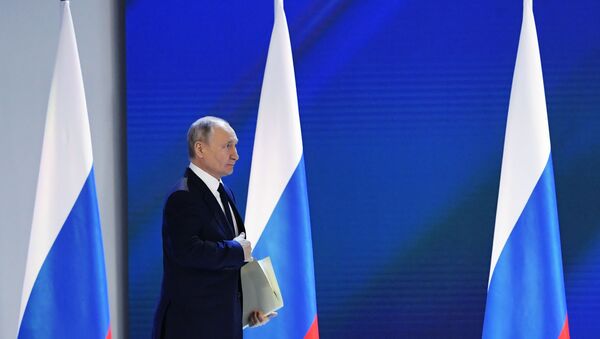 "Our strategy is to again achieve sustainable population growth, and ensure that average life expectancy in Russia will total 78 by 2030," the president revealed.

Russia's president said that the health care systems in many developed countries "have not been able to ward off the pandemic's impact as effectively as Russia".

The Russian president has called on the public to get vaccinated against COVID-19 in order to obtain herd immunity by this autumn.

"I appeal to all Russian citizens — get vaccinated," Putin said. 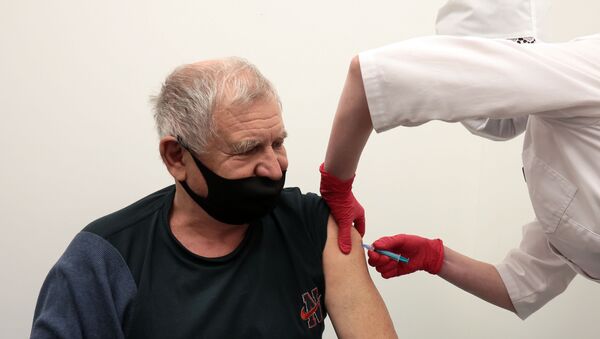 "Our scientists have made a real breakthrough, and now, Russia has three reliable coronavirus vaccines. This and many other accomplishments in recent years directly show the growing scientific and technical potential of our country," the president said.

"Naturally, there was great anxiety, but I, personally, also had a firm belief that we will definitely overcome all challenges. Our citizens, society, and the state acted responsibly and in solidarity, together we were able to take proactive steps," Putin said.

Russian President Vladimir Putin began his annual address to the Federal Assembly on Wednesday, stressing that he will focus on domestic issues such as healthcare and the economy.

"Today’s address will be mainly devoted to our domestic issues. Naturally, these are issues related to healthcare, social policy, economy; and certainly I will need to say a few words about foreign policy issues and security," Putin said.