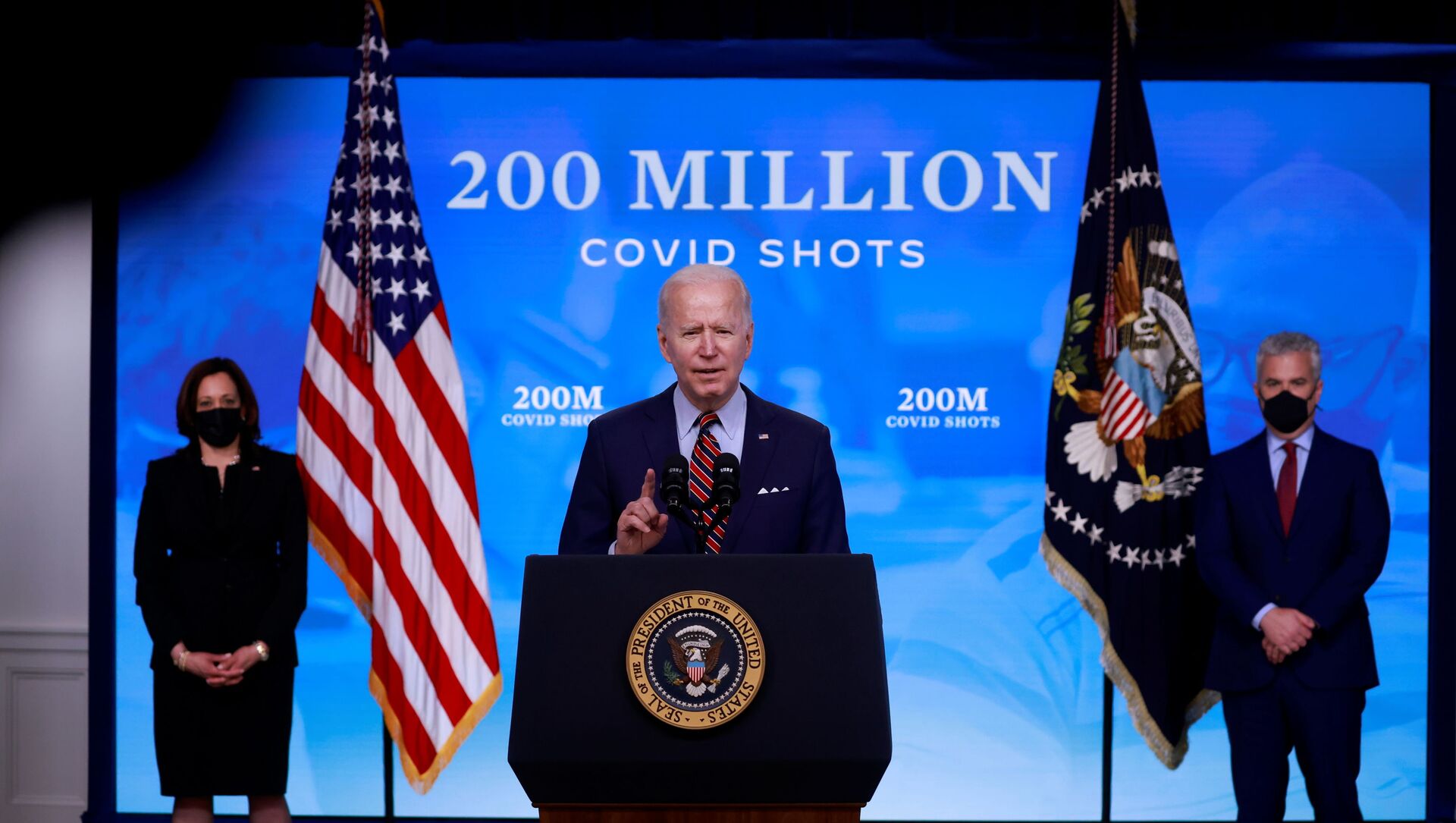 Morgan Artyukhina
All materialsWrite to the author
US President Joe Biden said on Wednesday that the country still wasn’t ready to begin exporting vaccines against SARS-CoV-2, the virus that causes COVID-19, although China has vaccinated a comparable number of people and exported nearly as many vaccines at the same time.

During a Wednesday address from the White House, Biden revealed that half of the US adult population has received at least one dose of a SARS-CoV-2 vaccine, but cautioned that the initiative must be completed by the whole population or their efforts will eventually be reversed.

“Today, we did it. Today, we hit 200 million shots on the 92nd day in office,” Biden said, adding that it was “a goal unmatched in the world or in prior mass-vaccination efforts in American history.” This adds up to more than 50% of US adults and 80% of Americans over the age 65, which he noted had sharply curtailed deaths among the elderly.

As a result, Biden said, the US was entering “a new phase of the vaccination effort,” expanding vaccine eligibility to every American 16 years old or older, as of Monday. Vaccination sites are also massively expanding to include more than 40,000 pharmacies.

Biden also called on all employers “large and small” to give employees time off with pay to both get vaccinated and recover from the side-effects of the vaccination, to further spur people to get their shots. “No working American should lose a single dollar from their paycheck because they chose to fulfill their patriotic duty of getting vaccinated,” he said, noting some employers had already taken the initiative and that the Internal Revenue Service would provide a method for employers to be compensated for the cost.

Biden added that the US was “not yet” ready to begin exporting vaccines.

“We’re looking at what is going to be done with some of the vaccines that we are not using,” he told reporters. “We hope to be able to be of some help and value to some countries around the world,” including Canada and in Central America. “We don’t have enough to be confident to give it - to send it abroad now, but I expect we’re going to be able to do that.” 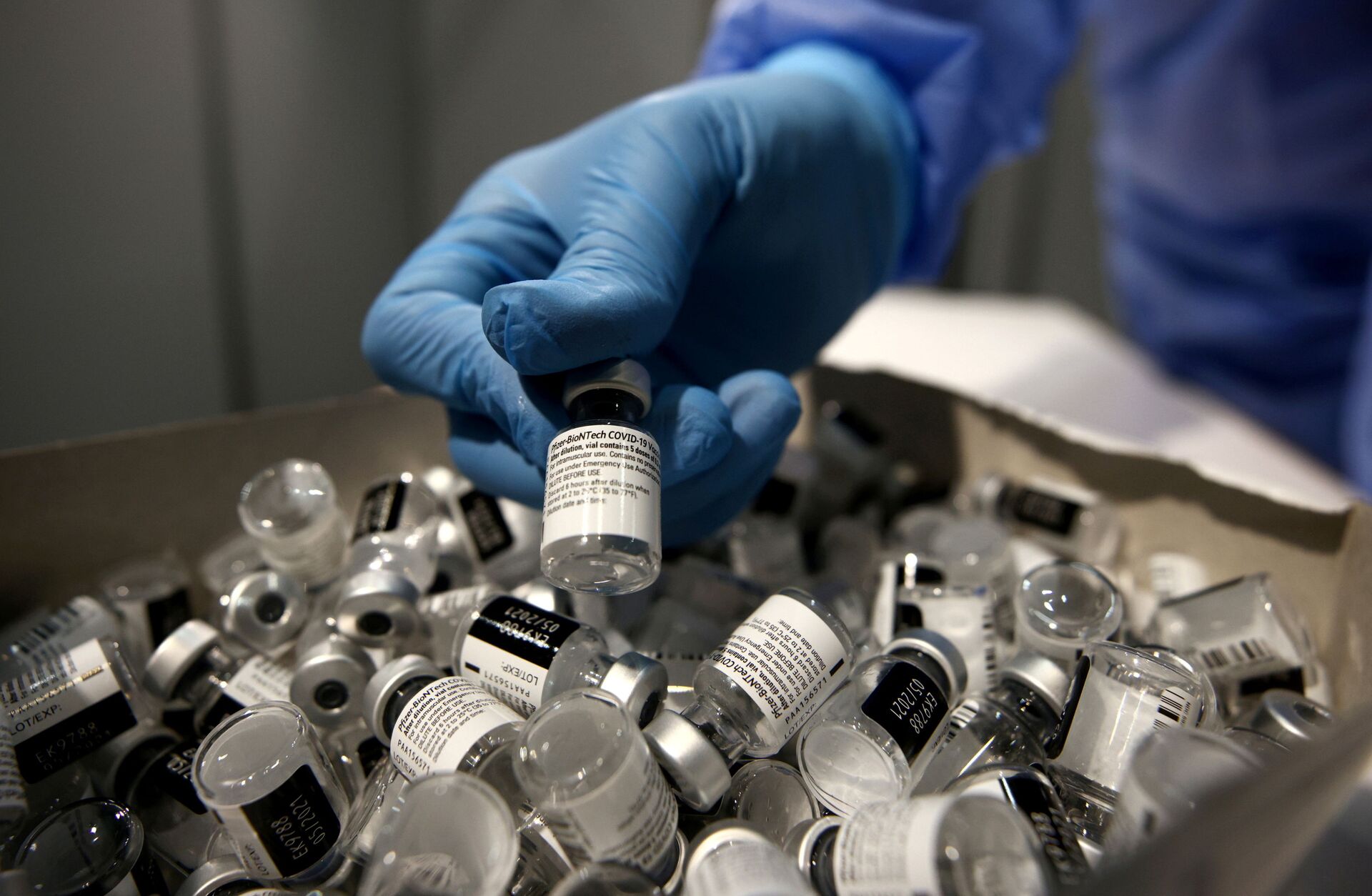 FILE PHOTO: A nurse puts a used Pfizer-BioNTech COVID-19 vaccine vial in a disposal box with empty vials at Messe Wien Congress Center, which has been set up as a coronavirus disease (COVID-19) vaccination centre, in Vienna, Austria February 7, 2021
© REUTERS / LISI NIESNER

As of mid-March, the US government had already paid for 750 million SARS-CoV-2 vaccines - three times the US adult population and more than twice its total population of 330 million. Biden has pledged $4 billion toward the World Health Organization’s COVAX program for providing vaccines at cost to poor nations, once the US has provided for itself, but it has strenuously fought efforts by those nations to convince the World Trade Organization to waive its stringent rules on intellectual property as they pertain to vaccine manufacturing.

China is closely tailing US vaccination numbers, with slightly over 195 million people vaccinated against SARS-CoV-2 as of Monday, according to Chinese National Health Commission data. As a percentage of its population of 1.4 billion, that number is much smaller than the US percentage, and Beijing has ramped up its efforts to increase vaccinations to 10 million per day to reach 500 million vaccinations by June 1.

However, in addition to this vaccination effort, China has exported almost as many vaccines to other countries as it has administered to Chinese citizens. As of April 1, when China had administered 116 million vaccinations, it had also shipped 114 million SARS-CoV-2 vaccines abroad, according to China Global Television, with nearly all of them going to other Third World nations, including in Southeast Asia and Africa.

In the US on Tuesday, 57,261 new cases of COVID-19 were reported to the US Centers for Disease Control and Prevention, although the seven-day moving average was slightly higher, at 64,144. In addition, 733 deaths were reported, slightly over the seven-day average of 685. Altogether, the numbers are some of the lowest seen in the US since last summer and just a fraction of those seen during the worst of the pandemic in December 2020 and January 2021.