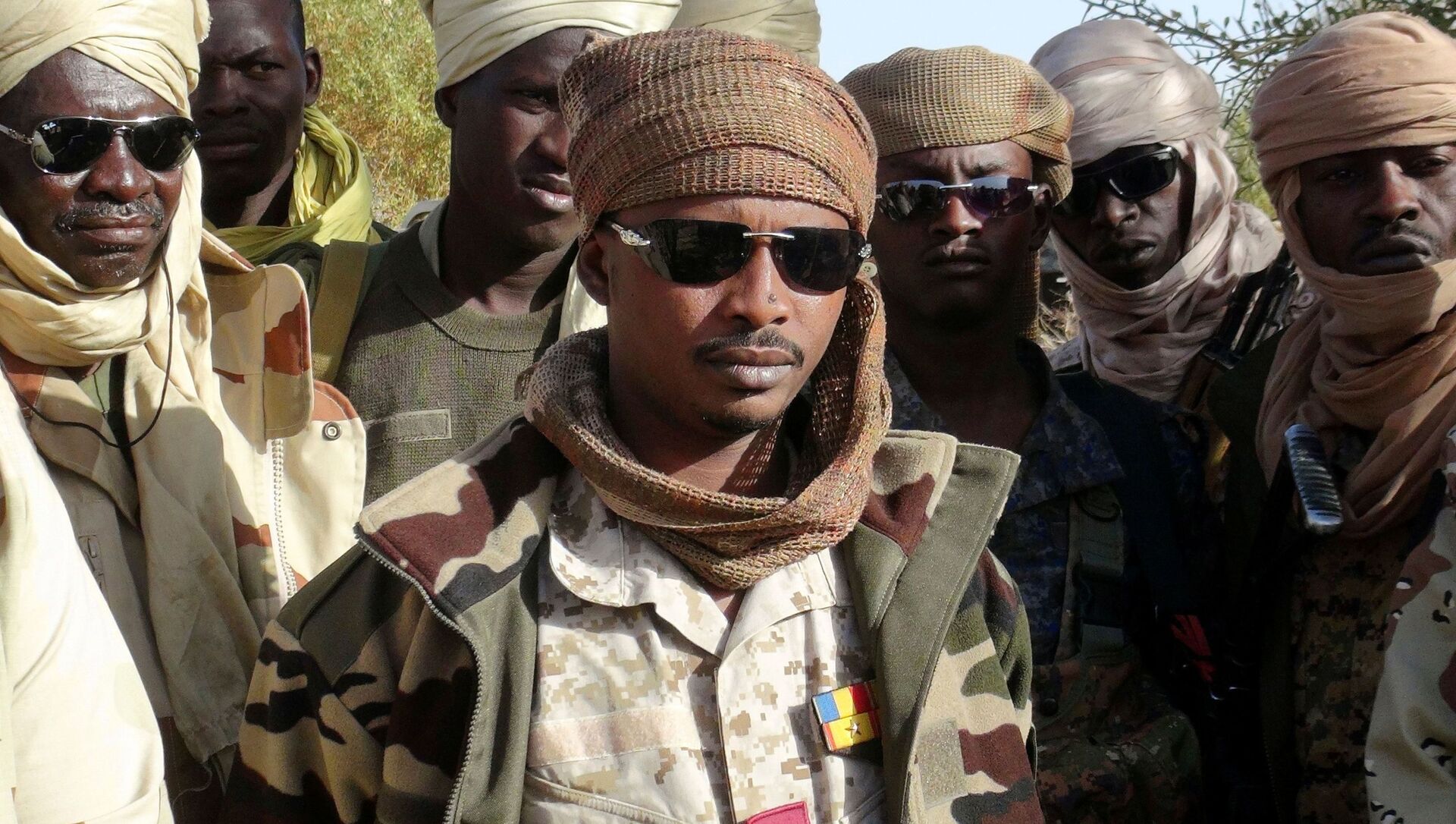 Morgan Artyukhina
All materialsWrite to the author
Chad is just one of several African nations on which former colonial powers have kept tight reins through military cooperation, debt diplomacy, and multinational corporate investment in resources extraction. The Sahelian nation plays a key role in sustaining the French military presence in West Africa.

After the unexpected death of Chadian President Idriss Déby Itno on the battlefield on Tuesday, the military has quickly moved to put his son, Mahmud ibn Idriss Déby Itno, in charge. However, critics are calling the move a coup against Chad’s constitution and a message of continuity to France, Chad’s former colonizer and close ally.

On Tuesday, a spokesperson for the Chadian military, Azem Bermandoa Agouna, announced on state-owned TV Chad that President Déby had “just taken his final breath while defending the territorial integrity on the battlefield.” Hours earlier, Déby had reportedly been wounded during a fight against the rebel group Front for Alternation and Concord in Chad (FACT), which was rapidly advancing on the capital of N’Djamena. It had also just been announced that he had won a sixth term as president in essentially uncontested elections, taking 79% of the vote.

In the aftermath, the military moved quickly to put the 37-year-old ibn Idriss in charge, including suspending the constitution in favor of a transitional charter and creating an 18-month transitional council, according to Al Jazeera. The army also dissolved the government and the National Assembly, closed all air and land borders, and instituted a nighttime curfew from 6pm to 5am.

“In the face of this worrying situation, the people of Chad must show their commitment to peace, to stability, and to national cohesion,” Agouna said.

However, this flurry of changes has caught the attention of onlookers who are weary of yet another coup attempt in the Sahelian nation of 16 million. Ayo Sogunro, a Nigerian author and human rights lawyer, blasted the move as a “coup against the constitution” and called on the African Union to repudiate ibn Idriss’ move.

Chad has no vice president and, by law the National Assembly completes the term of an incumbent president who dies. The Army seizing power and conferring it on the son of the president (who was the former president's deputy chief of staff) is a coup and unconstitutional.

​“Chad has no vice president and, by law the National Assembly completes the term of an incumbent president who dies,” Sogunro tweeted on Tuesday. “The Army seizing power and conferring it on the son of the president (who was the former president's deputy chief of staff) is a coup and unconstitutional.”

Abubakar Sidiq Usman, a Nigerian blogger who serves as special assistant to Nigerian Senate President Ahmad Lawan, noted there had already been reports of generals being executed since ibn Idriss took power to “show he is in charge.”

“Is [Déby’s] death truly caused by what was reported or something else?” he asked.

The interim Head of State in Chad has already began to show he is in charge. Some army generals have REPORTEDLY been executed, while some including the late father’s ADC are under arrest.

Is Derby’s death truly caused by what was reported or something else?

​Nathanial Powell, author of the book “France’s Wars in Chad: Military Intervention and Decolonization in Africa,” told Al Jazeera the move “is technically a coup, but it is signalling to Chadians but also the international community that there is an absolute commitment to regime continuity.”

“That sends a very strong message to France and to Chad’s other international partners that they can expect continuity. I think that’s the message they’re trying to send – whether they can sustain that is another question,” Powell said, noting the 68-year-old Déby had been grooming his son for the role for several years.

Indeed, like his father, ibn Idriss is a military man who served as deputy commander of Chad’s army detachment to Mali as part of Operation Barkhane. Under Déby, Chadian troops fought from Mali to Darfur, from Libya to the Central African Republic, becoming some of the most battle-hardened forces in central Africa.

A ‘Courageous Friend’ of France

Upon news of Déby’s death, the office of French President Emmanuel Macron hailed him as a “courageous friend” and “great soldier.”

“Chad is losing a great soldier and a president who has worked tirelessly for the security of the country and the stability of the region for three decades,” Macron said, according to state-owned France24. He also emphasized the importance of Chad’s “stability and territorial integrity” amid the struggle against FACT.

Similarly, French Defense Minister Florence Parly called Déby an “essential ally in the fight against terrorism in the Sahel” and said that “what’s central to us now is that a process of democratic transition can be implemented and the stability of Chad preserved.” 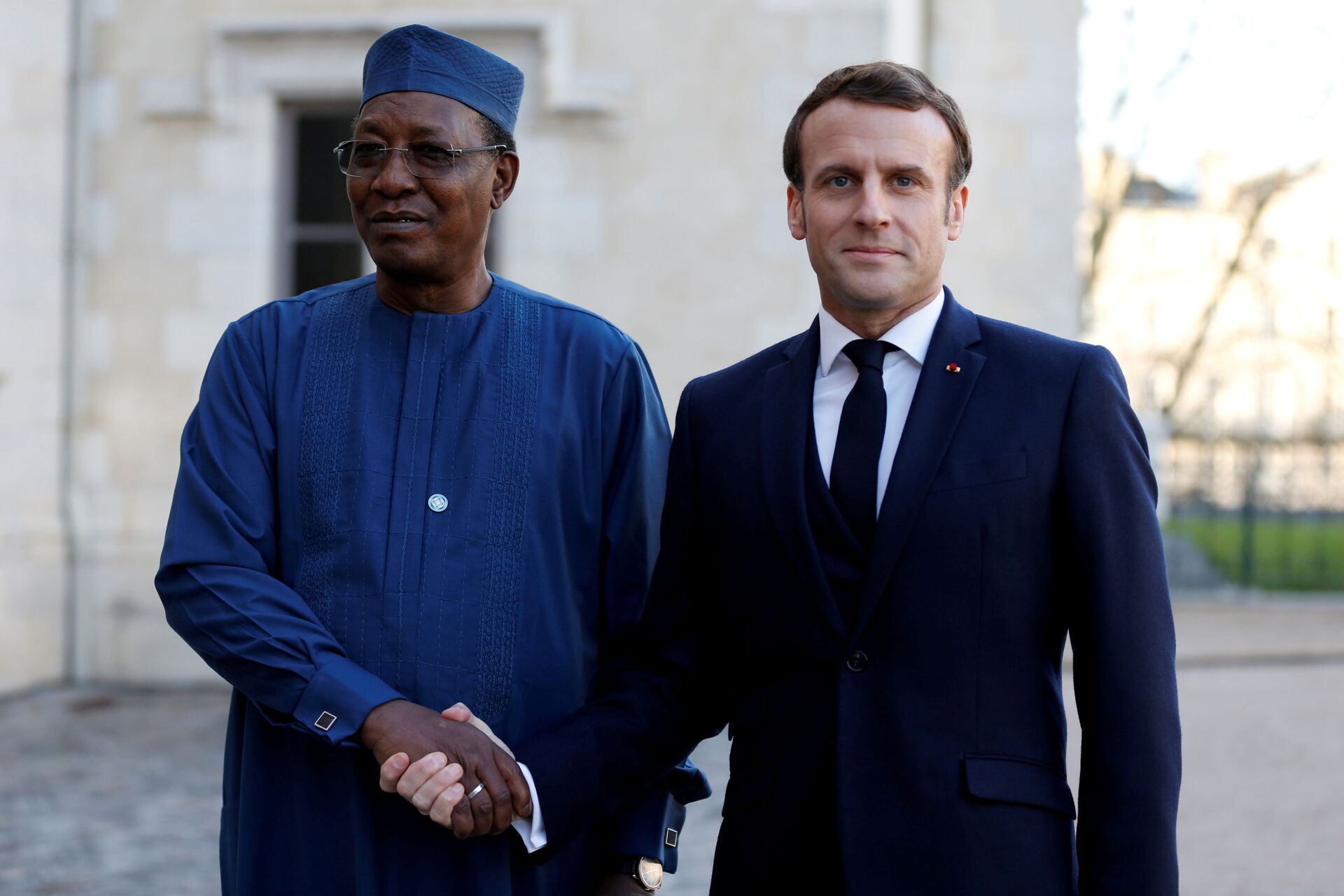 France’s 5,000-strong military force deployed to the Sahel, dubbed Operation Barkhane, is headquartered in N’Djamena. Ostensibly being fought against Daesh and other terrorist groups in the region, the war has been called France’s “forever war” and is increasingly unpopular both at home and in the five African nations that host French forces - all of which are former French colonies.

Chad was ruled by France for 60 years, from 1900 to 1960, before gaining independence alongside other French colonies as Paris fought a losing war to hold onto its settler colony in Algeria. The region had previously been home to several powerful empires that grew rich dominating the trade routes across the Sahel and Sahara, including the Bornu Empire, which reached its greatest extent in the early 17th century under the legendary ruler Mai Idris Alooma. However, even by the eve of French rule, the German explorer Heinrich Barth wrote of the region’s rich cotton-producing cottage industry in favorable terms compared to the cotton mills of Victorian England.

Although Chad ranks among the world’s poorest nations, it is rich in petroleum, which along with other mineral fuels accounted for 94% of its exports in 2019 and were worth nearly $1 billion. However, declining oil prices were already hurting its fragile economy even before the COVID-19 pandemic, which all but stalled after Anglo-Swiss multinational corporation Glencore turned off the taps at the two huge oil fields it owns in southern Chad. The Mangara and Badila oil fields had previously produced 10-14,000 barrels of oil per day, according to S&P Global Platts estimates.

Chad’s total oil reserves are estimated at 1.5 billion barrels - more than in all of Australia. The oil is primarily exported via a pipeline that leads to an offshore rig off the coast of Cameroon built by a consortium that included ExxonMobil, Chevron and Patronas. However, N’Djamena gets just 12.5% of the proceeds from each barrel of oil sold. A Chadian court settled a suit with ExxonMobil in 2016 over $819 million in unpaid royalties. 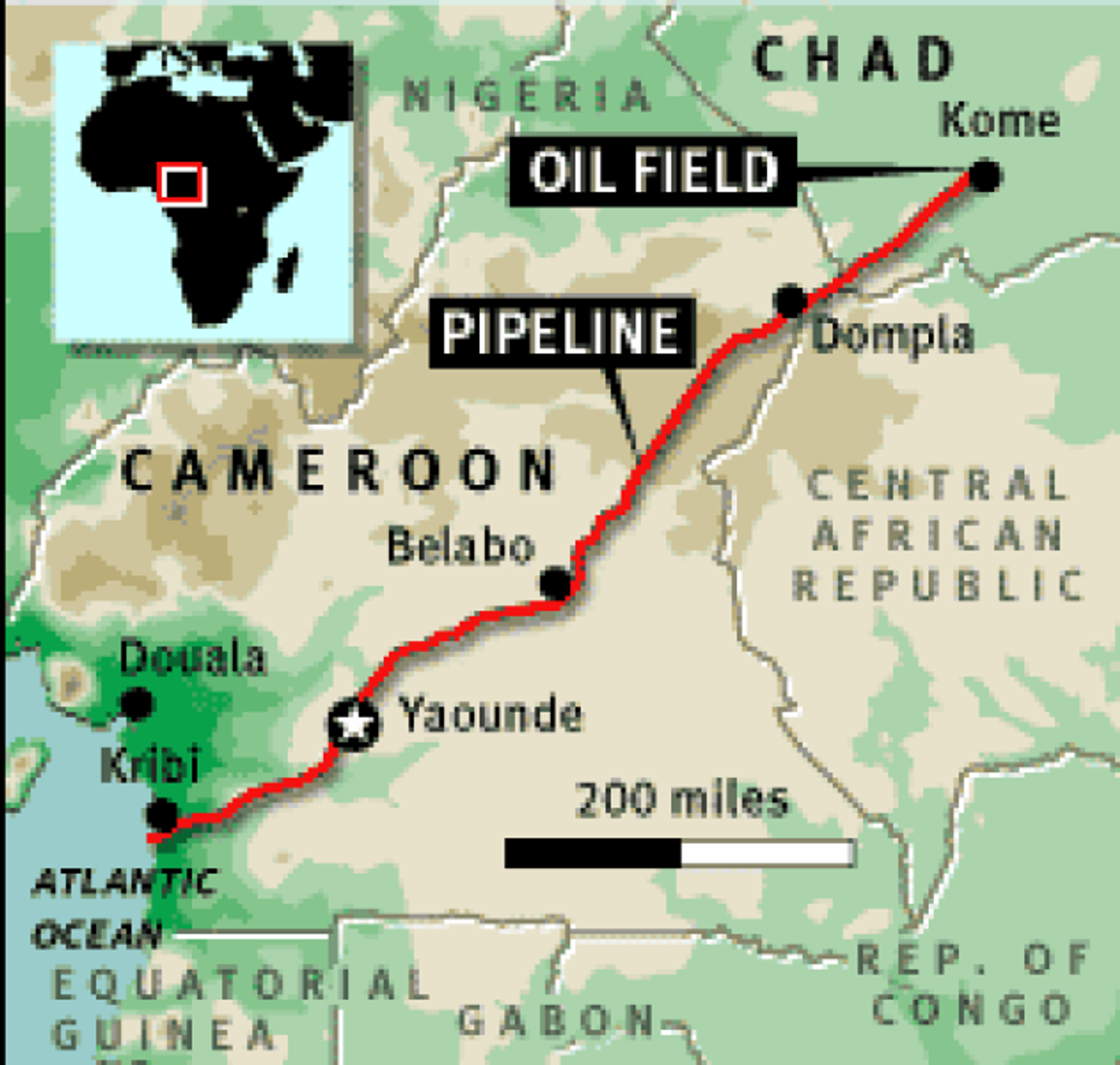 The Chad–Cameroon Petroleum Development and Pipeline Project, built by a consortium of ExxonMobil, Chevron and Petronas, and completed in 2003.
© MSNBC

N’Djamena is deeply indebted to Glencore, having refinanced a 2014 loan for $1.45 billion intended to be repaid with oil shipments in 2018 in order to receive another International Monetary Fund bailout. When Chad asked the IMF for debt restructuring in January of this year, becoming the first nation to do so under new G20 rules, the country’s public or publicly guaranteed debt - including the Glencore loan - was estimated at $2.8 billion or 25.6% of its gross domestic product in 2019 term.

The United Arab Emirates has also invested heavily in Chad, putting $150 million towards its $9 billion economic restructuring plan in 2017 intended to shift its economy away from depending on fuel exports. As Sputnik reported, in the aftermath of this investment, N’Djamena reversed its 1972 decision to suspend relations with Israel, becoming the first of several African nations to do so, all of which have also received heavy Emirati investment in recent years.