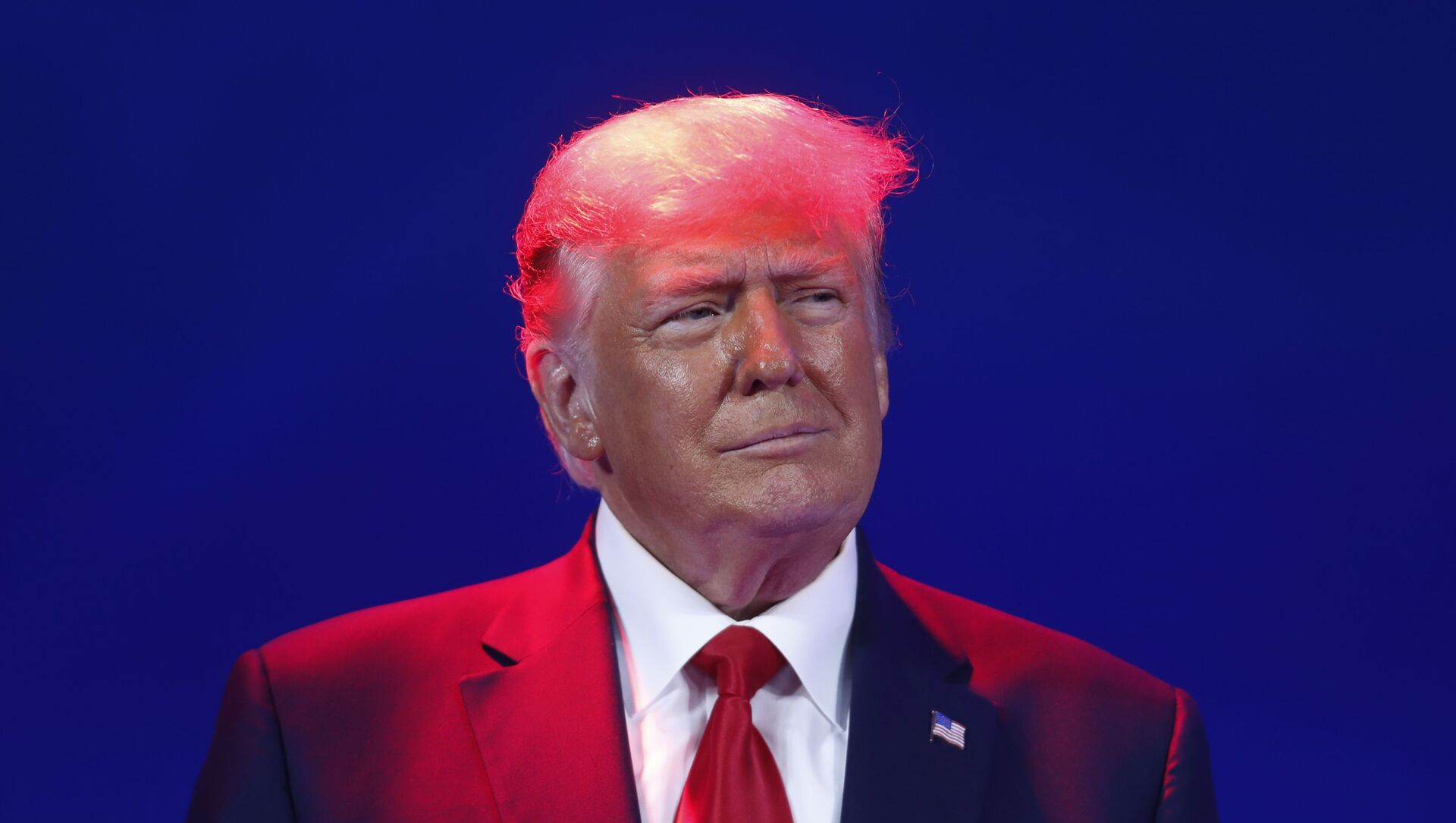 © REUTERS / OCTAVIO JONES
Subscribe
International
India
Africa
Ekaterina Blinova
All materialsWrite to the author
On the night of 17 April, Ron DeSantis, the Republican governor of Florida, dined together with former President Donald Trump at the annual Lincoln Day fundraising event at Mar-a-Lago, according to a photo shared by Brigitte Gabriel, Lebanese-American conservative author, on Twitter.

Ron DeSantis has risen to prominence over the last few months: previously, the Florida governor's performance was averaging less than 5 percent, well behind ex-Vice President Mike Pence, in non-Trump primary surveys, according to CNN.

Currently, DeSantis is seen right at the top of the limited non-Trump 2024 polling, along with the former veep and Texas Sen. Ted Cruz, the media outlet highlights: "If Trump decides not to run in 2024, DeSantis has as good if not better chance of being the party's nominee as anyone", it suggests.

The Republican politician owes Trump a lot, given that he was "a nobody congressman" when the former president "blessed" his candidacy in the 2018 Florida gubernatorial race, The New York Times points out.

DeSantis managed to win over the hearts and minds of Republican voters by resisting lengthy pandemic lockdowns, opening up earlier than other states, and navigating Florida through the pandemic relatively well despite the gloomy prognoses of early 2020, the newspaper notes. According to the NYT, DeSantis positions himself as nothing short of "a political heir to former President Donald J. Trump".

For their part, conservative bloggers draw attention to the Florida governor's "mannerisms", noticing that many of his gestures are similar to those used by Trump when the latter addressed the public.

​Furthermore, many of DeSantis' policies appear to be in line with Trump's agenda, including the early re-opening of the state, abolishing critical race theory studies in schools, and prohibiting "vaccine passports", to name but a few.

Now, when several American cities have been engulfed by protests over the deadly shooting of African-American Daunte Wright in Minneapolis, Minnesota, and Mexican-American Adam Toledo in Chicago, Illinois, Florida's GOP lawmakers have introduced the "anti-riot" Combating Public Disorder bill.

​In early March, Florida filed a lawsuit against the Biden administration over the president's immigration policy that, according to the GOP, has led to a border crisis of mammoth proportions. Speaking to Fox News’ Maria Bartiromo on 18 April, the governor underscored that "the lawsuit seeks to have them actually follow the law, follow the Constitution".

DeSantis also insists that China's leadership should be held "accountable" for "covering-up" the COVID pandemic outbreak, akin to Trump.

"At a minimum, I believe this is something that likely escaped from that lab. They knew. They covered it up. They didn’t say anything for a long time. They didn’t provide access", DeSantis told The Epoch Times earlier this month, presenting no evidence to back his assumptions.

The governor's swift rise to prominence has not gone unnoticed by GOP donors, who see him as "a nicer version of Trump", as Politico remarked on 16 April. To date, they have thrown their weight behind his 2022 gubernatorial re-election bid. However, some of them appear ready to support the governor if he throws his hat in the ring in 2024.

"He’s in the top tier, should he choose to run for president", Art Pope, a long-time conservative benefactor, told Politico.

DeSantis has received six-figure sums from prominent GOP donors including Bernie Marcus, Paul Tudor Jones, and Steven Witkoff in the last two-plus months alone, according to the media outlet.

The governor's latest meeting with Trump at the yearly Palm Beach GOP Lincoln Day Dinner has added to speculation about his participation in the 2024 election.

"It wasn’t some secret Trump/DeSantis meet at Mar-a-Lago this weekend to discuss 2024", tweeted conservative commentator and TV host John Cardillo.