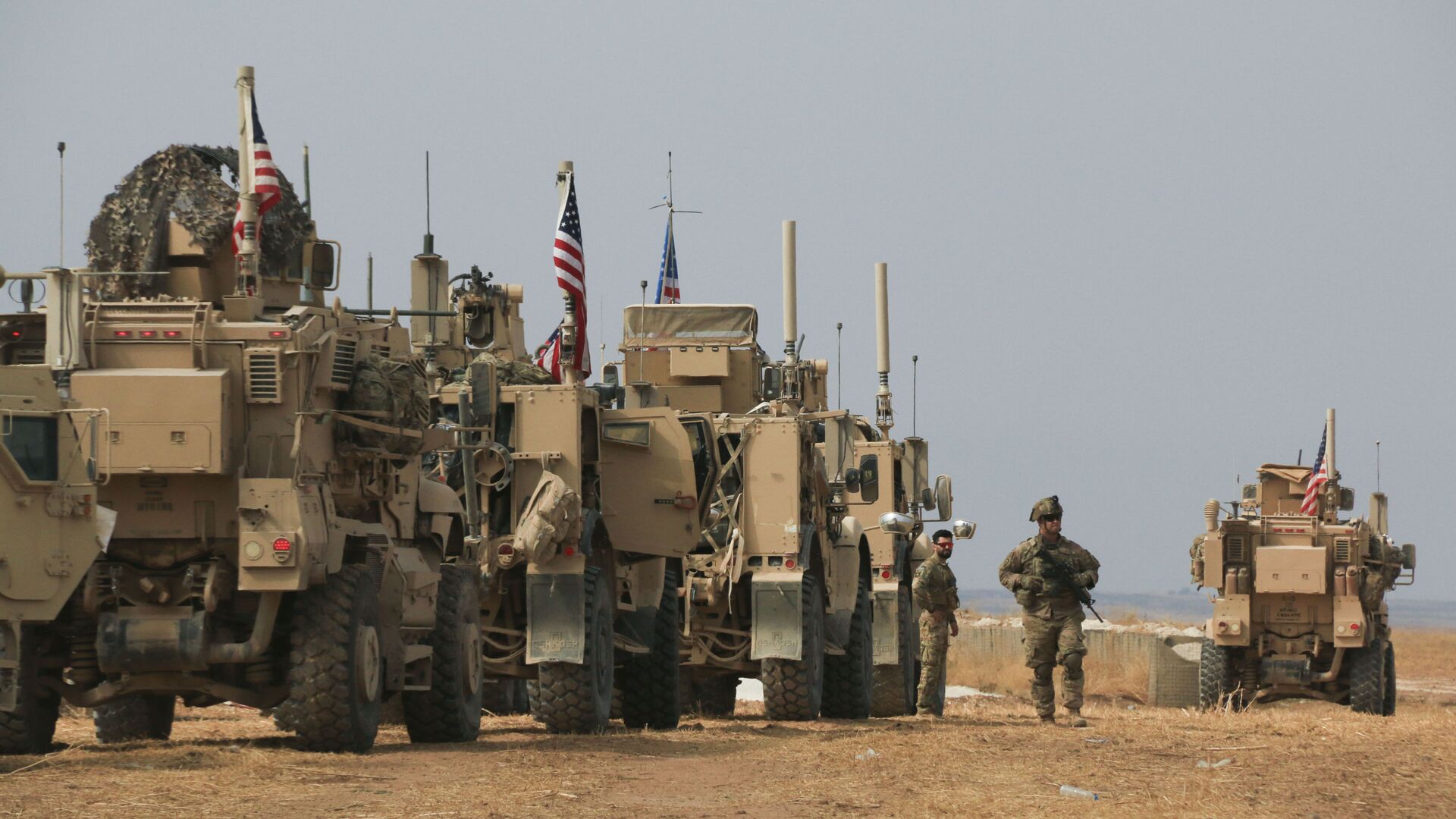 Asya Geydarova
Editor
All materialsWrite to the author
Syrian media have reported that US forces have transported weapons, as well as smuggled oil and stolen wheat, to its bases in Syria and Iraq on multiple occasions, despite the fact that the Syrian Arab Republic has never allowed the American military presence in the country.

A US convoy carrying weapons and logistic materials, and several armored vehicles, was witnessed in the northwestern province of al-Hasakah, the state-run Syrian Arab News Agency (SANA) reported on Sunday, citing local sources.

According to the sources, the convoy of 24 trucks, loaded with boxes of weapons, ammunition, refrigerators, was headed for the US base in the city of al-Shaddadi, south of al-Hasaka.

Another US convoy was also recently spotted in northwestern Syria. On 12 April, the American forces transported 41 tankers of oil looted from the Hasaka countryside over the border to its bases in neighboring Iraq. An earlier report said that the  US transported weaponry and logistic gear from bases in Iraq into Syria's Hasakah province, with the incoming shipment including 59 refrigerator trucks, tankers with military supplies and Humvees.

In January, SANA reported that the US military transported 70 members of Daesh* from prisons controlled by Kurdish-led Syrian Democratic Forces (SDF) in Syria's al-Hasakah to its base in the At Tanf area on the Syrian-Jordanian border. The news agency added that the military base in the At Tanf area serves as "a sanctuary for the terrorists in the region," where they are supplied with weapons.

The US forces were deployed to Hasakah and Deir ez-Zor - which are, in fact, the most oil-and gas-rich provinces in the Arab republic - without official consent from the Syrian government. Damascus has repeatedly appealed to the international community to denounce the American military presence in the country as illegal and a violation of Syria's sovereignty, pointing out that it is aimed at controlling the oil fields in northern Syria. 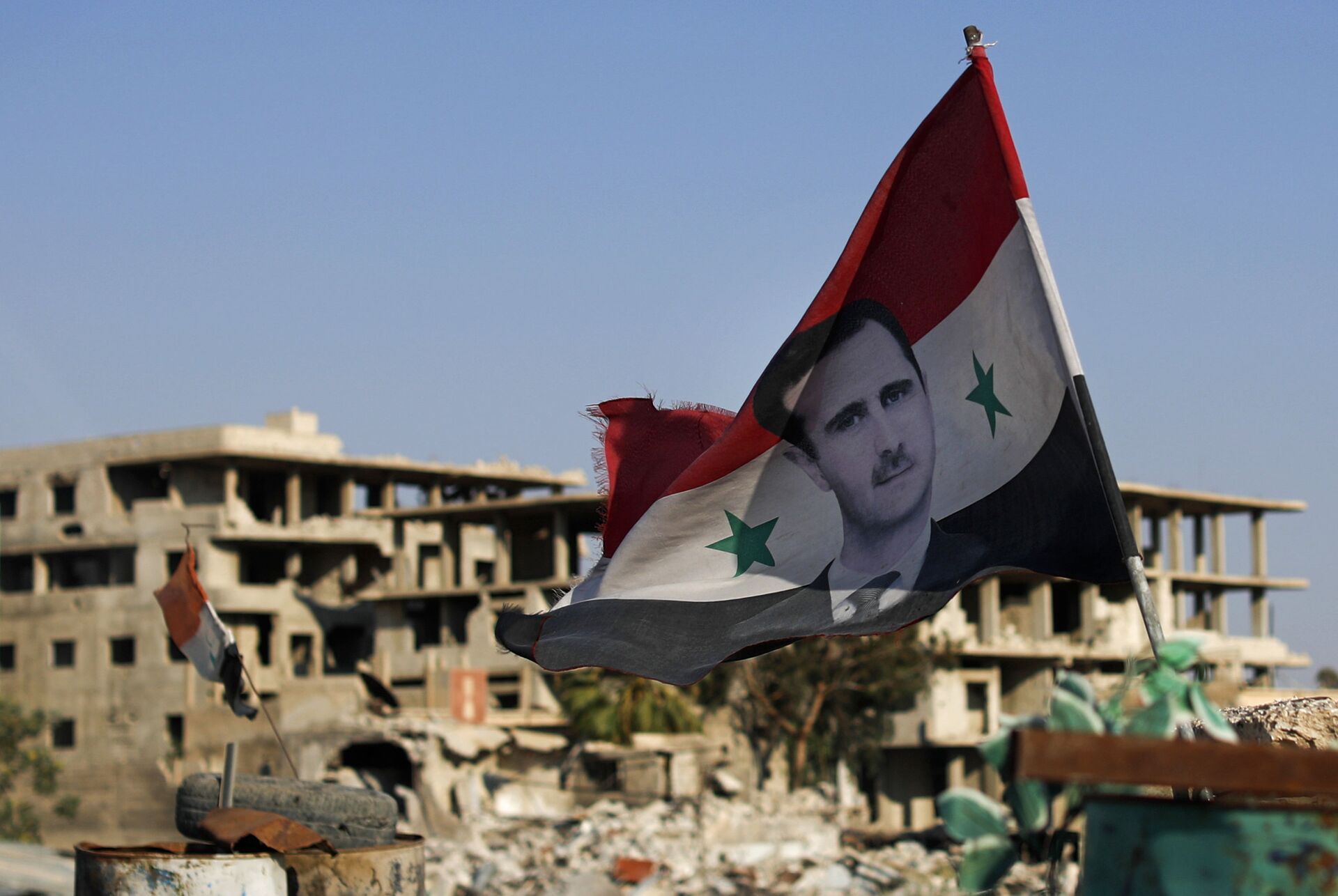 In this July 15, 2018 file photo, a Syrian national flag with a picture of Syrian President Bashar Assad flies at an Army check point, in the town of Douma in the eastern Ghouta region, near Damascus, Syria.
© AP Photo / Hassan Ammar

Notably, the Russian forces were invited by Syrian President Bashar al-Assad back in 2015 to help combat terrorists and restore order in the war-torn country. Ex-US special envoy for Syria, Jim Jeffrey, acknowledged in December that the goal behind the US mission in Syria was actually to prevent Assad from restoring control over territory within its internationally recognized borders.

Former US President Donald Trump announced in 2018 that the United States would be bringing home troops from Syria. However, he later changed his mind, saying that a residual force of US troops will remain in northeast Syria to "secure the oil".

In August 2020, former US Secretary of State Mike Pompeo confirmed that American oil firm Delta Crescent Energy had secured a deal to modernize oil fields controlled by the Kurdish militia. The deal was slammed by the Syrian government as being designed for the purpose of "stealing Syrian oil".

A political and media adviser to the Syrian president, Bouthaina Shaaban, told Sputnik then that "it is not a deal, it is a robbery of the Syrian oil that is the right of the Syrian people to use and to take".