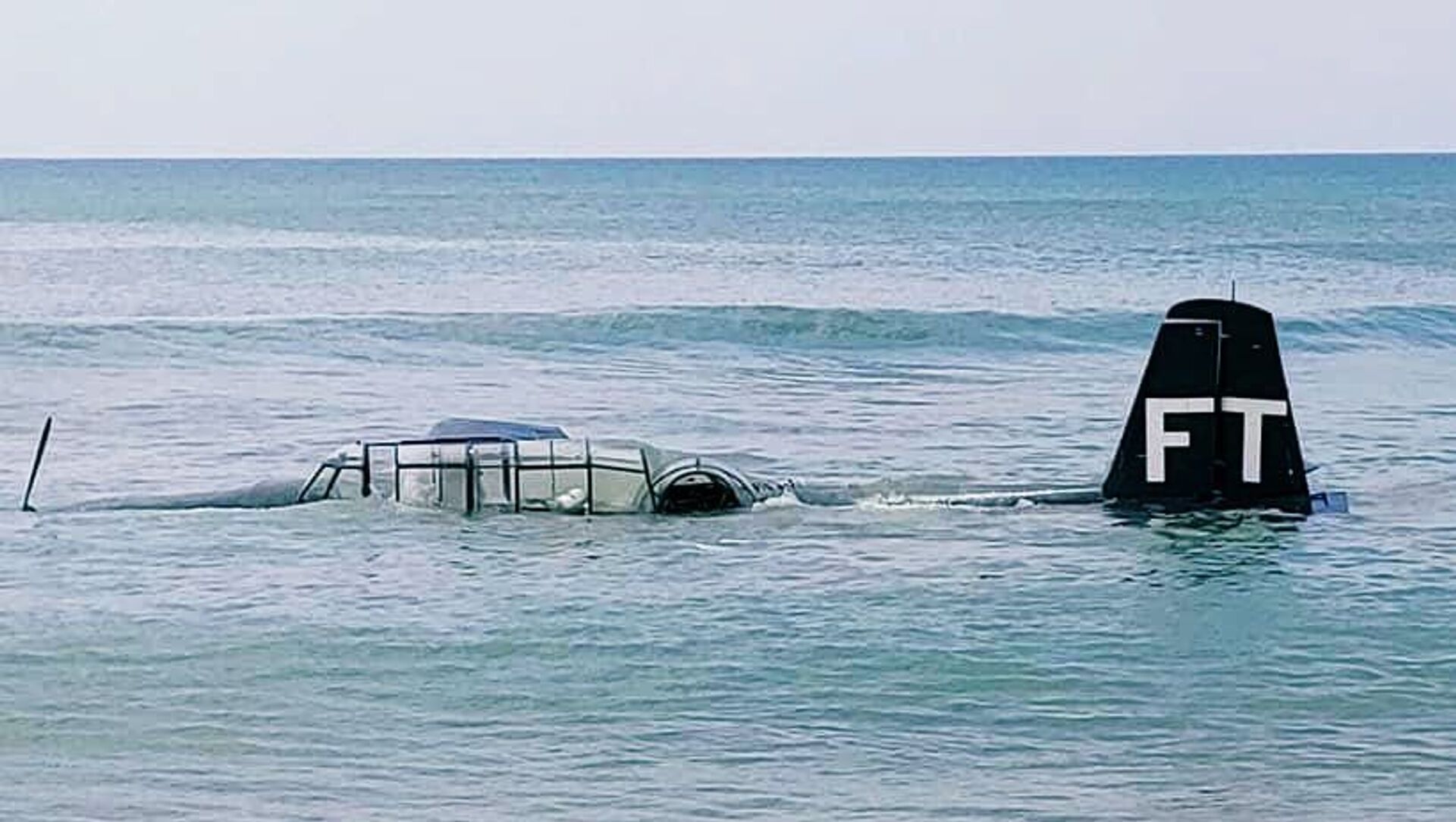 Kirill Kurevlev
Correspondent
All materialsWrite to the author
The crashed plane, a TBM Avenger, is a torpedo bomber used by the United States Navy during WWII. The plane underwent thorough restoration before being returned to flight last year, according to the Cocoa Beach Air Show website.

On Saturday, a World War II-era plane participating in the Florida Air Show made an emergency landing in the ocean near the Patrick Space Force Base beaches, local media reported.

The single-engine TBM Avenger made a "soft" landing in the shallow water south of Cocoa Beach, as can be seen on videos posted on Twitter. In the videos, the plane descends low in a coordinated manner before skidding to a halt in the ocean, causing a lot of spraying and foaming around it.

​The plane's propeller can be seen no longer spinning in another video as it glides into the shallow water. Dozens of people in the water are seen looking up as it flies low overhead, and onlookers are taken aback as the tiny plane descends.

#ongoing A TBM torpedo bomber, WW2 Warbird, ditches off Cocoa Beach (Florida, US). Plane was taking part in a "warbird parade" when it had a mechanical issue. Reportedly nobody was hurt. Looking at the first seconds, I thought it was going for a torpedo run! pic.twitter.com/foF44hN6V7

According to the report, fortunately, the plane landed safely, and no one was injured, including the pilot, who refused medical treatment.

The air show organizers issued a statement saying that the cause of the warbird's emergency landing was a "mechanical issue."

"The TBM Avenger performing in the warbird parade had a mechanical issue and the pilot was able to bring the plane down close to the shore. Rescue personnel were immediately on scene and the pilot is OK," the Cocoa Beach Air Show statement read.

Crazy stuff happened today! Just happed to get some photos of the plane crashing during the Cocoa Beach Air Show. The pilot managed to land it in the water with no injuries to anyone. Thread of photos: pic.twitter.com/ic8d7AlmjS

​As stated on the air show's website, the plane was used as a US Forestry Service fire bomber in Davis, California from 1956 to 1964 after it was retired from US Navy service. The TBM Avenger, made in 1945, was restored by the Valiant Air Command over an 18-year period, with the vintage torpedo bomber flying again in January 2020.

The Cocoa Beach Air Show, which runs April 17-18, will continue on Sunday.

The US Air Force Thunderbirds and the F-22 Raptor Demonstration Team will also be performing at the show. A B-1 Lancer bomber, B-52 Stratofortress bomber, A-10C "Warthog" Thunderbolt II, C-17 GlobeMaster III, and a Valiant Air Command warbird parade are among the other military aircraft on display.