Kirill Kurevlev
Correspondent
All materialsWrite to the author
The funeral ceremony will begin this Saturday at 11 am local time and will last until about 3 pm. Due to restrictions imposed because of COVID-19, the Queen will have to sit alone for the ceremony with a total of just 30 guests.

Queen Elizabeth II was seen on Friday walking her corgi and dorgi this afternoon ahead of her husband's funeral, as it was reported that she is "holding up well" despite mourning Philip after 73 years of marriage, The Daily Mail reported.

As seen on the photos obtained by the outlet, the 94-year-old monarch rode her green Jaguar X-type through the grounds of Windsor Castle, where the Duke of Edinburgh will be laid to rest at St. George's Chapel, for the first time since his death.

A single Queen's Guard stood at attention as Her Majesty rode away from the castle reportedly with her two new corgi puppies towards Frogmore Gardens, close to where her grandson Prince Harry is said to be self-isolating at Frogmore Cottage.

On the same day, the Queen's youngest son, Prince Edward, seemingly emotional, accompanied by his wife Sophie, and their 17-year-old daughter Lady Louise Windsor arrived at Windsor to show their support for the Queen and examine floral tributes left outside the church where his father will be buried. 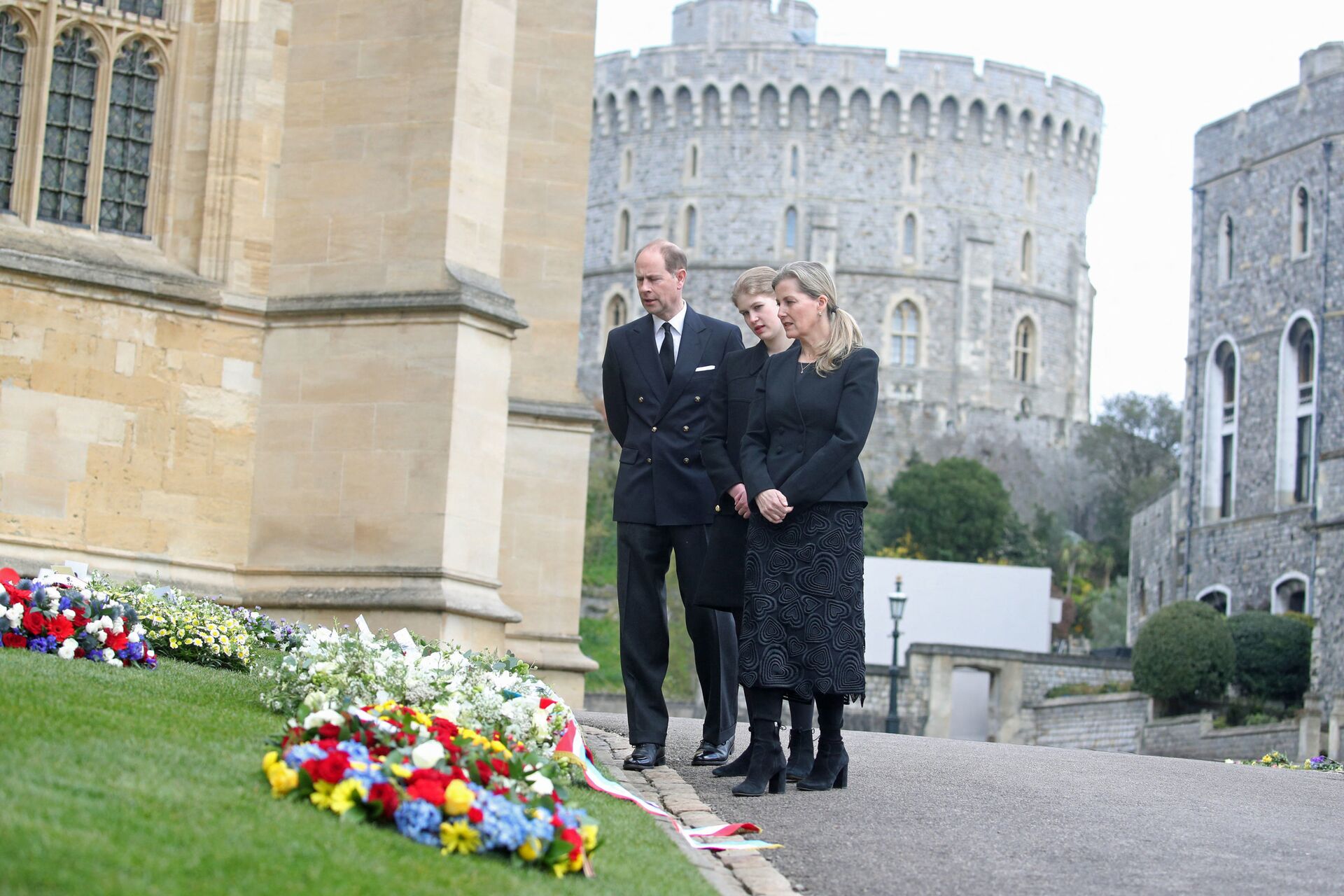 The Queen is "bearing up well," according to the report, and she signed off on the final arrangements for her husband's funeral. Earlier she reportedly instructed to keep William and Harry separated behind their grandfather's coffin in the procession.

"Final preparations are going on today and she is in control," the report quotes an undisclosed source within the castle.

Angela Kelly, the Queen's long-time confidante and dresser, approved the Queen's outfit for the funeral on Friday.

"The Queen will be relying heavily on Angela Kelly for support today. And she is going to be visited by her hairdresser Ian Carmichael," the source said.

Among the funeral wreaths left by family members, politicians, public figures and ordinary people was a wreath from Prime Minister Boris Johnson, who in his tribute to the late prince said the UK owes him "more than words can say." 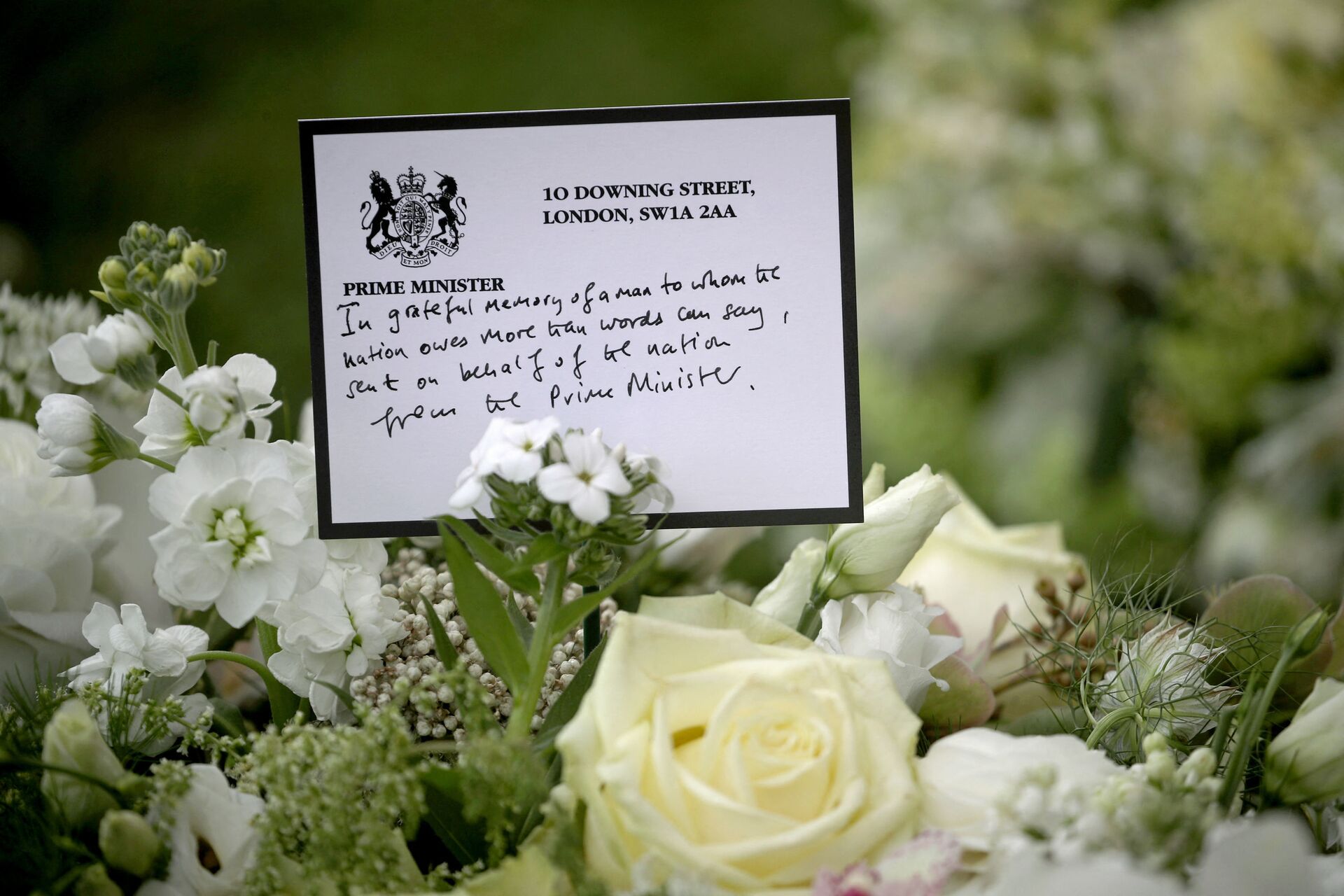 A wreath sent by Britain's Prime Minister Boris Johnson is pictured amongst floral tributes outside St George's Chapel, at Windsor Castle in Windsor, west of London, on April 16, 2021, following the April 9 death of Britain's Prince Philip, Duke of Edinburgh, at the age of 99.
© AFP 2022 / STEVE PARSONS

Brothers Apart: Queen Orders William, Harry to Be Kept Separate at Prince Philip's Funeral - Report
The estranged royal brothers are among the small group of close family members who will accompany the Duke of Edinburgh's body to church, but they will be divided on the approximately eight-minute walk from Windsor Castle to church by their cousin, Peter Phillips.

The Queen will ride in the state Bentley at the back of the procession, and before it departs, Her Majesty will pause for a moment behind the coffin at the State Entrance to the castle for a moment of quiet contemplation.

When the Land Rover-borne coffin is brought into St George's Chapel, the ceremony of laying the body of 99-year-old Prince Philip to rest will begin.