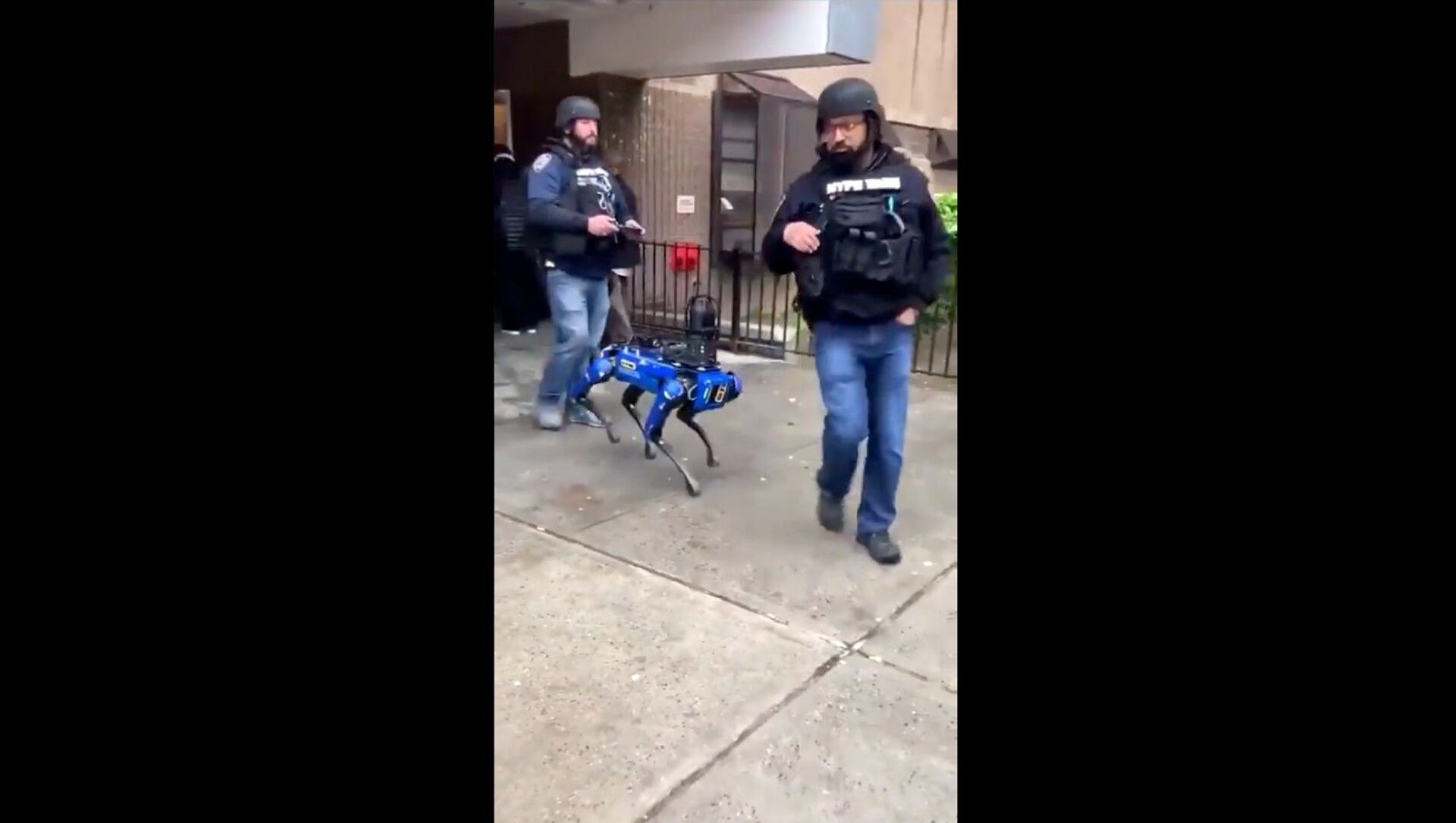 MariTi Blaise Lovell
All materialsWrite to the author
The use of robots and robotics for military purposes is still relatively new, though the style and quality have greatly increased in the past decade. The science fiction series “Black Mirror” gave an eerie sneak peek into the use of dog-like robots in the futuristic episode “Metalhead.”

For some Manhattan public housing residences, science fiction has become a step closer to reality when on Monday officers from the New York Police Department (NYPD) put on a show with their own version of a four-legged, dog-like machine trotting along inside of a New York City Housing Authority (NYCHA) building.

In a Twitter video shot outside of a NYCHA building on East 28th street, NYPD officers are shown making an arrest of a suspect who was reported to have locked himself inside an apartment building. What makes this unfortunately common scene a bit more daunting is when a Boston Dynamic “Digidog” brings up the rear, shocking onlookers as it descends down the stairs alongside the officers.

Bystanders can be heard in complete shock, calling the robot, R2-D2, after the iconic droid from the “Star Wars” franchise. The fluid movement of the robot and its ability to descend stairs and sit like an actual dog is what seems to draw the crowd. An unseen woman in the video gasps out, “I’ve never seen nothing like this before in my life. Are you serious?”

This isn’t the first debut of the Boston Dynamic “Digidog” being deployed by NYPD officers. Back in February, a robot dog was deployed in NYC’s Bronx borough after a report of an armed hostage situation.

Some local residents have questioned when and where the NYPD acquired access to the robot, and how they can afford it, as well as how it will contribute to the apparent rise in surveillance. Documents from the NYPD show that instead of being listed as surveillance equipment, the “Digidogs” have been simply written off in internal paperwork as “situational awareness cameras.”

Last year, the US Air Force also debuted their own version of a robot dog as part of a demonstration of its new digital battle network system.

According to the Wired, response to the new robots have been fairly mixed, with some individuals being justifiably terrified and preferring more human police presence, while others welcome the created distance between “trigger-happy” officers and suspects. The usage of the bots has drawn concern from New York City lawmakers, such as city council member Ben Kallos, who has proposed a law banning police from owning and operating weaponized robots.

While the “Digidog” currently does not hold or use any weapons, NYPD has claimed they have been using robots since the 1970s for hostage situations, hazmat incidents, and bomb squad tests. Robert Playter, the CEO of robotics company Boston Dynamics, has also confirmed that the company’s terms of service prohibit the use of weapons on their robots, such as is the case with “Spot,” who is the model for the NYPD “Digidog.”

Aside from the questions being posed, one thing for certain is that the future is here, and to some NYCHA residents, it’s a sight they have never seen before.

Company Behind the NYPD ‘Digidog’

Boston Dynamics is an American engineering and robotics design company best known for its fluid-moving “dancing robots.” Boston Dynamics has also developed agile robots that are capable of jumping and performing parkour-like movements.

“Spot,” who is the model used for the NYPD robot dog, is the company’s quadruped robot that has the capability to climb stairs and traverse rough terrain and debuted for commercial sales in June 2020. According to a statement from the CEO, Boston Dynamics is still growing and only hopes to expand more.

“Boston Dynamics is rapidly expanding thanks to the successful debut of our first commercial robot, ‘Spot,’ which is now being used across the globe to tackle hazardous tasks in dangerous environments like power plants, decommissioned nuclear sites and construction projects,” Playter said in a news release.

“Spot” has since been tested by the French army for combat training, but can also be used for indoor health care and entertainment.