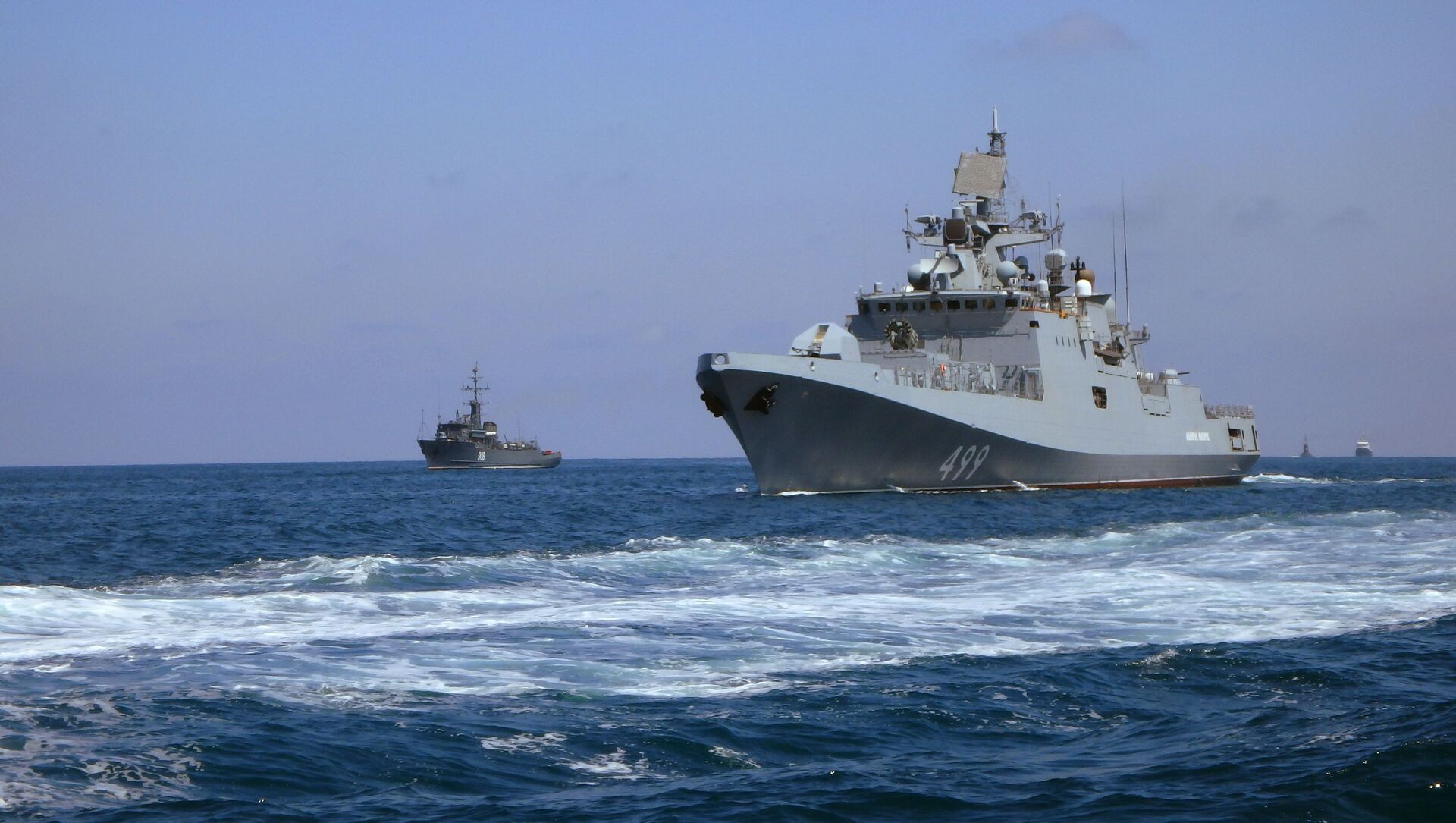 © Russian Ministry of Defence
/
Go to the photo bank
Subscribe

Ilya Tsukanov
All materialsWrite to the author
Last week, a Turkish Foreign Ministry source confirmed to Sputnik that Washington had notified Ankara about plans to sail a pair of Arleigh Burke-class missile destroyers through the Bosporus into the Black Sea, where they are expected to be stationed between mid-April and early May for “routine” “freedom of navigation” operations.

A detachment of warships from the Russian Black Sea Fleet has gone to sea to conduct artillery fire exercises, the Defence Ministry announced on Wednesday.

The artillery drills will involve the Admiral Makarov, an Admiral Grigorovich-class frigate, as well as the Grayvoron and Vyshny Volochek Buyan-class corvettes. All three are capable of carrying Kalibr or Oniks anti-ship cruise missiles.

Other ships involved will include the Samum, a hovercraft missile ship, the Ivan Golubets minesweeper, and multiple unnamed large landing ships. The drills will also feature the use of helicopters and aircraft from the naval aviation and air defence forces of the Black Sea Fleet, with ship crews to conduct artillery fire at surface and air targets.

Earlier, it was reported that as many as 15 ships from Russia’s Caspian Flotilla had been transferred to the Black Sea for drills.

The drills come ahead of the imminent arrival of the USS Roosevelt and the USS Donald Cook warships in the Black Sea. The Arleigh Burke-class guided missile destroyers are armed with Tomahawk cruise missiles, VL-ASROC anti-submarine missiles, and RIM-156 SM-2 surface to air missiles, and are expected to sail into the Black Sea between 14 and 15 April, and to remain in the area until 4 and 5 May, respectively. Last week, Pentagon spokesman John Kirby called the operations of US warships in the Black Sea a “routine” manner.

The presence of US warships in the Black Sea area is restricted under the terms of the Montreux Convention of 1936, which limits the tonnage and numbers of navy vessels from non-Black Sea powers allowed in the body of water. Countries not adjacent to the Black Sea cannot stay in its waters for more than 21 days, and their total tonnage cannot exceed 30,000 tonnes.

World
NATO-Ukraine Commission Meets to Discuss 'Russia’s Military Build-Up'
The Russian Black Sea fleet drills and the imminent deployment of US warships to the body of water come amid a major escalation of tensions in eastern Ukraine. Officials from the breakaway Donbass republics have accused Kiev of preparing a new major military offensive. Washington, its European allies and Kiev have accused Moscow of stationing troops on the border and seeking “provocation”. Russia has urged Kiev and the breakaways to stick to the terms of the Minsk ceasefire.

On Tuesday, Russian Deputy Foreign Minister Sergei Ryabkov accused the US and NATO of “deliberately turning Ukraine into a powder keg” with its weapons deliveries, and stressed that if any escalation takes place, “the responsibility for the consequences of such an escalation will lay entirely at the feet of Kiev and its Western curators”.

World
CNN Raises Eyebrows After Using Images of Ukrainian Tanks While Bashing Russia's 'War Preparations'
Last month, the Biden administration approved the delivery of another $125 million in military aid to Ukraine, bringing the total ‘anti-Russia’ assistance delivered to the country in recent years to over $1.85 billion.

Moscow is a guarantor of the 2015 Minsk peace agreements, which froze the civil war that broke out in eastern Ukraine in the aftermath of the February 2014 Euromaidan coup d’etat in Kiev. The agreements stipulate a ceasefire, the withdrawal of heavy military equipment from the line of contact, and more significantly, the return of the breakaway regions to Ukrainian jurisdiction after they are granted broad autonomy and protected status. The ceasefire portion of the agreement has generally held, but Ukrainian legislators have refused to extend autonomy to the breakaways, thus preventing the peace deal from being fully implemented.