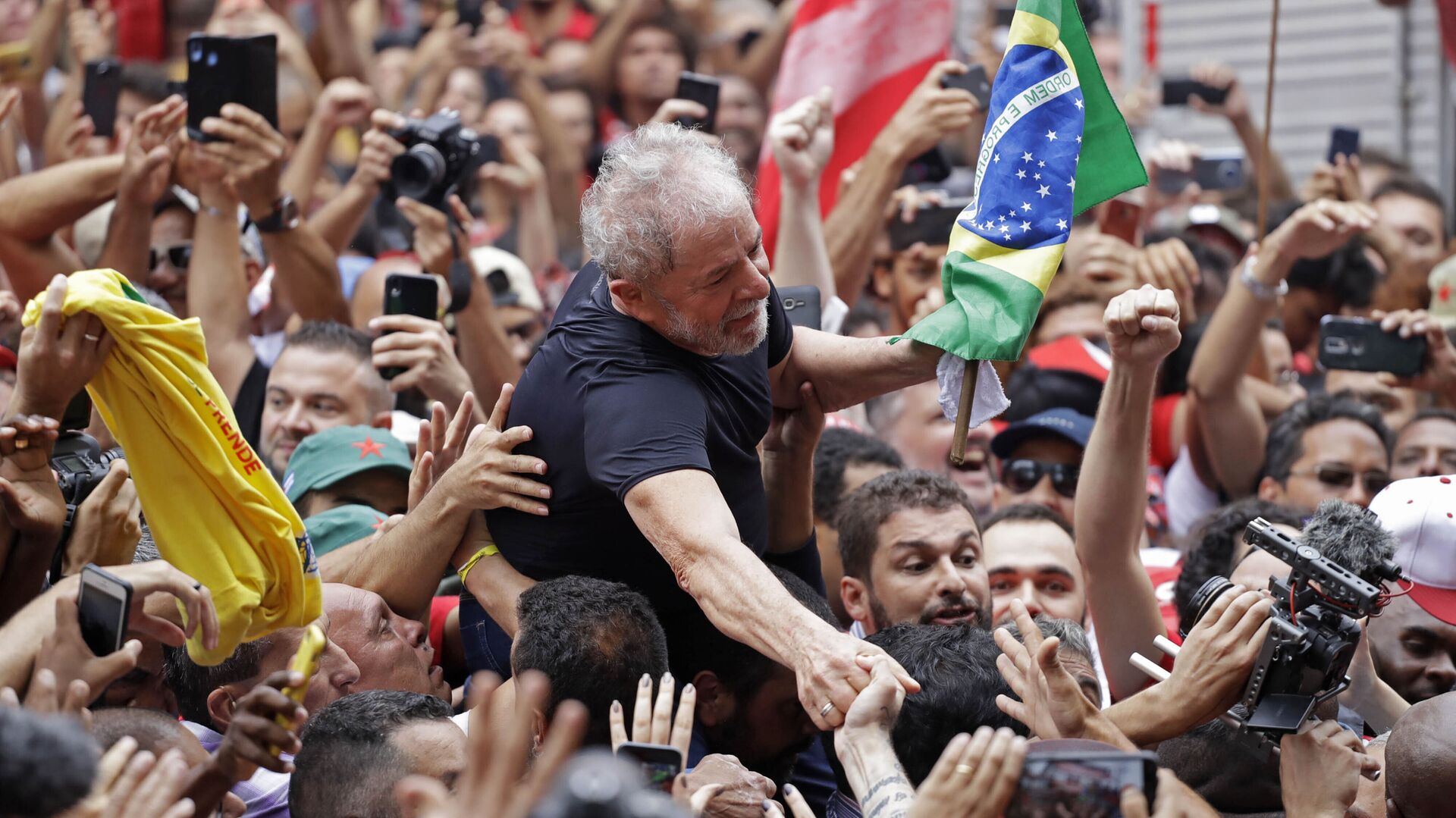 In a 2 April interview with the Portuguese television station RTP, former Brazilian President Luiz Inácio Lula da Silva, 75, noted that he would run for the presidency of Brazil in 2022 if "necessary". The March verdict by Brazil's Supreme Court invalidating the former president's conviction has become a big game changer in the country's politics by opening the door for Lula to potentially run for re-election.

This has sounded alarm bells for President Jair Bolsonaro and his powerful supporters. However, it's unlikely that the military, who endorsed Bolsonaro in 2018, will try to hinder Lula's campaign if he runs, says Brazilian diplomat and politician Celso Luiz Nunes Amorim, who twice held the position of foreign affairs minister between 1993 and 1994 under President Itamar Franco and then between 2003 and 2010 under President Lula da Silva. But what if Washington and multinational corporations try to throw a spanner in Lula's works?

Sputnik: What are Lula's chances of winning the race?

Celso Amorim: Lula as many others, as many of us, - I say that because I feel personally linked to him, also - we are now concentrated on what can be done to improve the life of the Brazilians because of the pandemic. Brazil has a record number of deaths per day. It's a country that holds the greatest number in the world. This, of course, is accompanied by recession, unemployment, and a lack of income for the poor. So all these things now have concentrated his attention. Of course, if you ask the question, he'll say "Well, I may run," I don't know exactly what he said to [Portuguese] television, but I have heard him some other time saying: "Well, if there is a request from my party and from the progressive forces, the ones that are more linked to social ideals in Brazil with more independence in foreign policy, if these forces ask, I'll run." But as I've said, it's a bit early.

Of course, Lula is a gigantic force in Brazilian politics, so he'll have a great influence anyhow. And of course, many people, like myself, hope that he'll run. But, of course, as I say we are a little far away, and we are in the midst of the pandemic, a big health crisis, a big economic crisis, a big potential social crisis, also. So it's a bit too difficult to make a precise forecast. 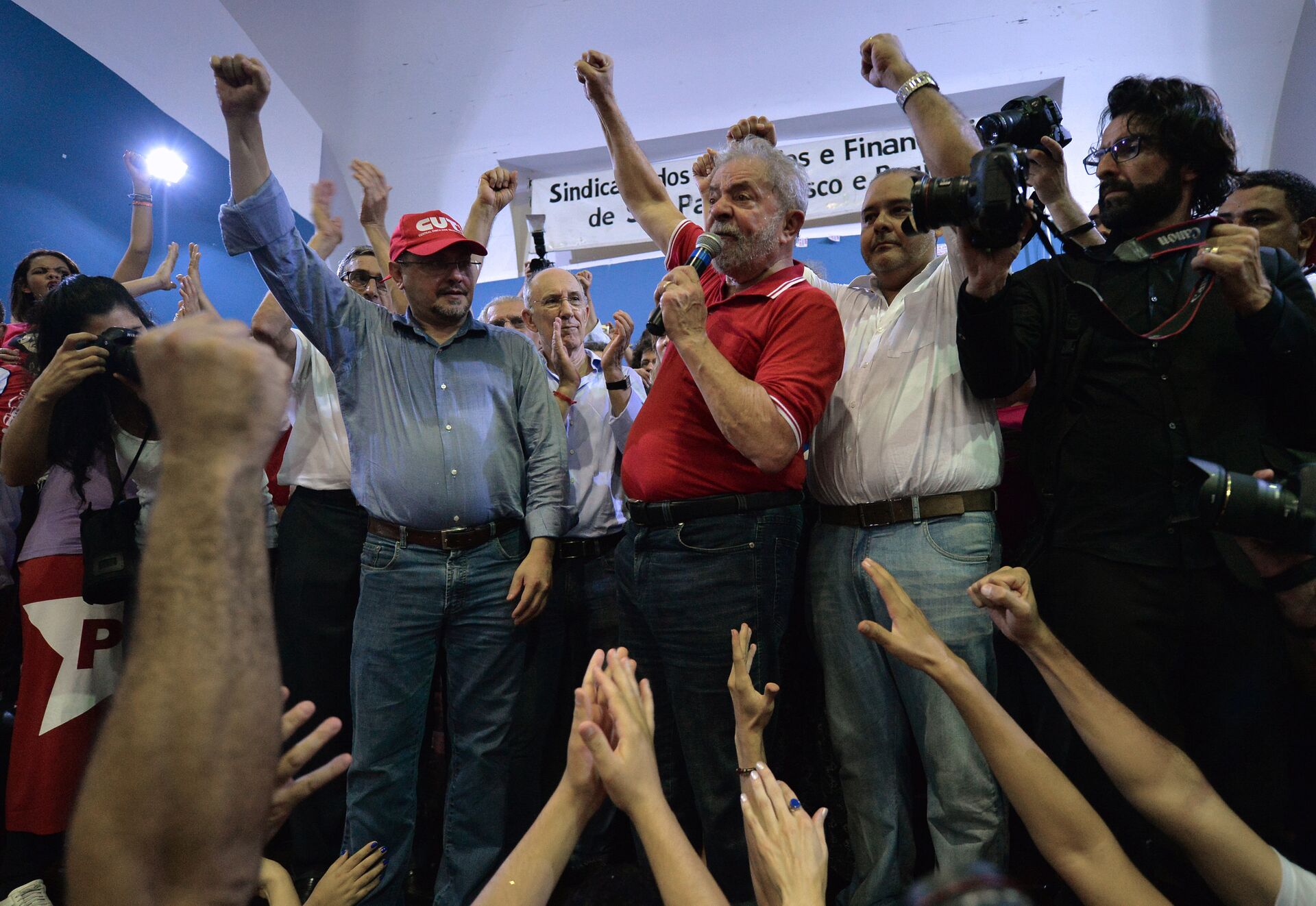 Sputnik: What reaction can Lula expect from Washington, given that the Biden administration is at odds with the Bolsonaro cabinet? Will Washington try to meddle in the Lula campaign?

Celso Amorim: Washington is not such a simple concept. There are different forces in the United States that act in different ways. Certainly, if you had the Trump administration, they would support Bolsonaro. With the Biden administration – we don't know yet. So far, his policies toward Latin America have not shown much progress. But you know, when Lula was president we had good relations, and that was with President Bush and President Obama. Of course, there may be interests of American companies in Brazil. There may be some other strategic interests. But, it's no longer what used to happen in the 1960s or the 1970s.

So, I don't see really why they would try to do anything to block Lula's campaign, because actually Lula has always been a person who was open to dialogue, even in relations with difficult questions like Venezuela, to speak about a regional aspect here. 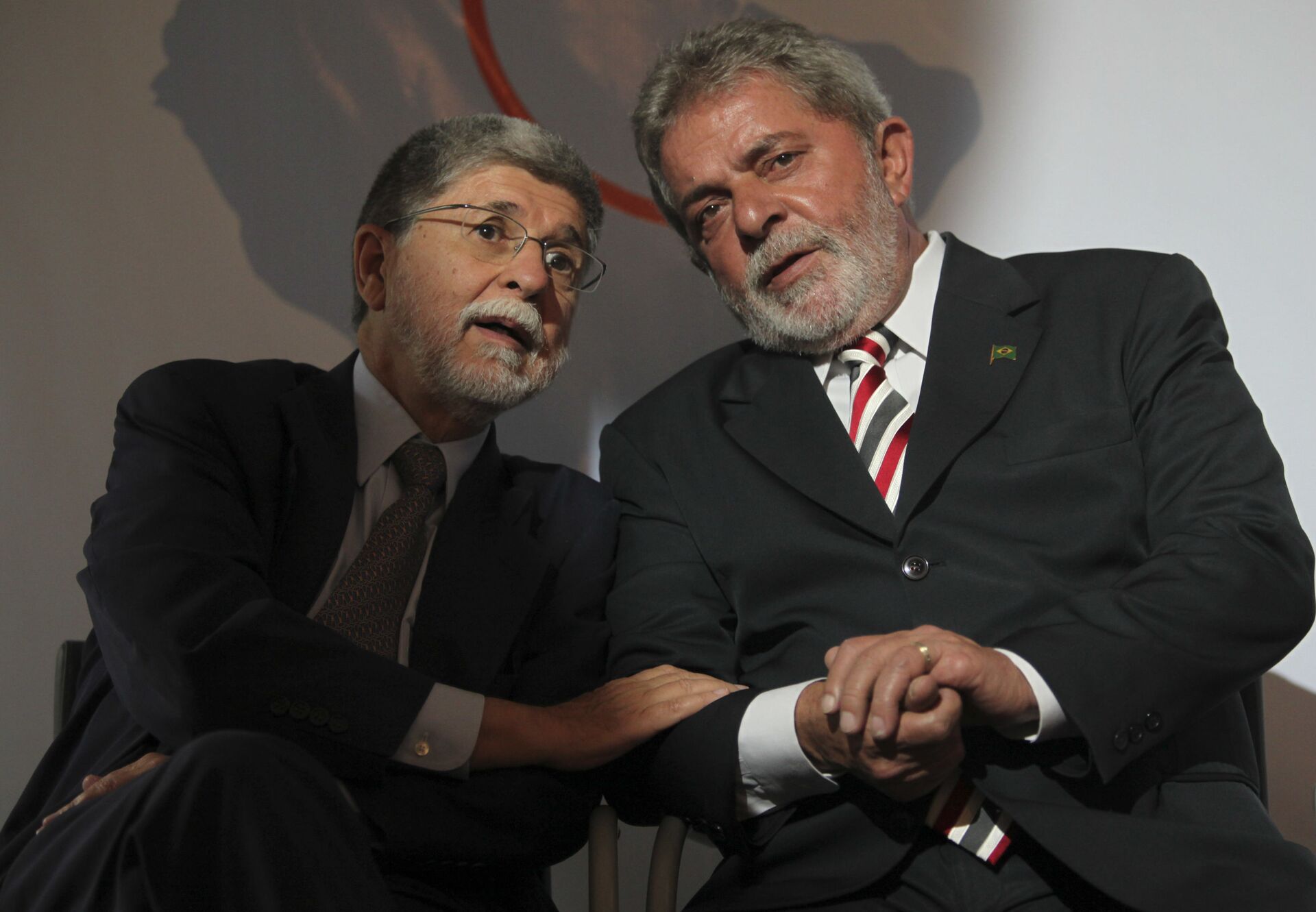 Sputnik: Could multinational corporations try to hinder Lula's campaign, given that he is opposing more privatisation?

Celso Amorim: Certainly, there are, in Brazil, forces who are more linked to let us say this neo-liberalism that want to privatise and they can gain from this process also, in Brazil. And, of course, there may be other international companies that may be interested in Brazil but they don't have dominance. They may have some support, internationally speaking, that will oppose Lula because they want to have more privatisation, more space to make gains, immediate gains.

On the other hand, even because of the pandemic, because of the high unemployment, because of the policies that have to do with the price of oil, there is a growing sense in Brazil - which goes beyond traditional progressive forces - that we need a presence of the Brazilian state in the economy in order to re-launch the economy. This is happening even in the United States. What Biden is doing now in the United States is something that has not happened since FDR, Franklin Delano Roosevelt, at the time of the [Great] Depression, in the way he is injecting money including by increasing taxes, taxes on the rich, taxes on the corporations.

So, the world is changing a little bit. We can't think only through the models that we had, even the models that we had until ten years ago, they became already, in a way, overcome, surpassed. So, there's a new world. I think that the fact that we have BRICS for instance, we have the possibility, Russia has just proposed, I saw my good friend [Russian Foreign Minister Sergei] Lavrov, with whom I interacted for many years as foreign minister and before as ambassador to the UN, proposing that Russia could abandon the dollar.

I don't know if Brazil can abandon the dollar, but we could have our trade among BRICS countries with our currencies. So I think it's very important to reinforce BRICS.

I think Brazil has to work within the groups like BRICS and, of course, to have normal relations with the United States, as well. It's not easy because Latin America is seen by many people in the US as their backyard, as somehow was implied in your question. But I think also this is changing: we have progressive governments in Mexico, in Argentina, in Bolivia. So, if Lula is elected... and I think if he runs, he has a big chance of being elected, and almost certain that he would be. If he is elected we'll be able to work both with the integration of South America and with groups like BRICS, and also with the United States, and also with the European Union. 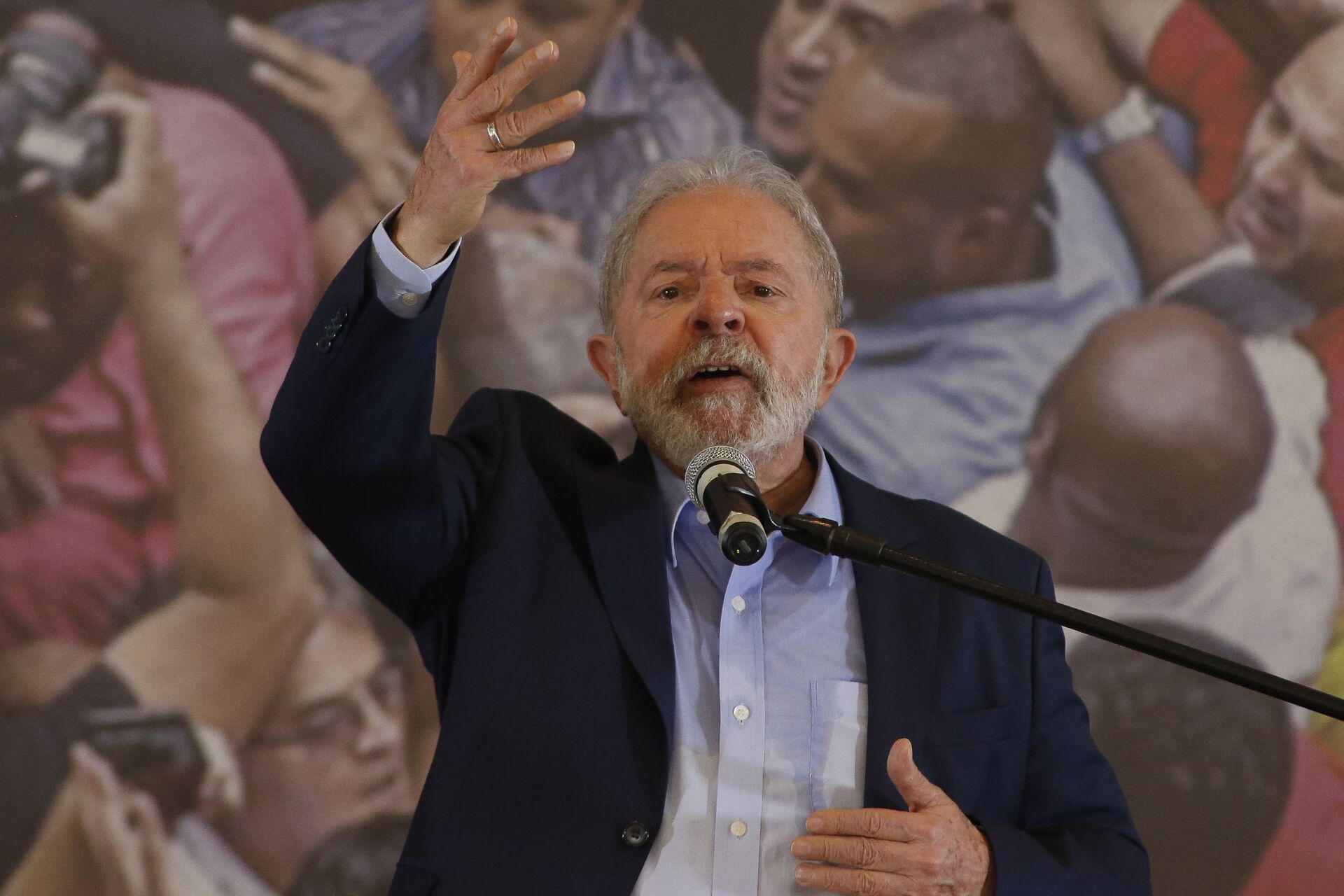 Sputnik: Which domestic issues will Lula address right away if he wins the presidency? What changes in foreign policy might one expect if Lula wins?

Celso Amorim: The immediate issue that he is addressing now [is the pandemic], because Lula is a big figure in Brazil, what he says and does has an influence. Even, for instance, when Lula criticised the minister of health, Bolsonaro sacked his minister of health. He did not criticise the minister, he criticised the policy, and the minister was sacked some days later. Bolsonaro had never used a mask, and when Lula spoke about these things, he started using it, because he knows that Lula has great influence and he wants to preempt him.

Brazil has a fantastic health system, one of the best in the world - it was not properly used by Bolsonaro, by the present government, - but thanks to that, the situation is not even worse. It's more or less like the National Health [Service] in Britain. Of course, we are a developing country and don't have the same kind of resources, but it permeates the society.

In terms of foreign policy: well, of course, the world changes, so I can't say that he will do exactly the same things as he did 10 years ago when he was in power. But certainly, we'll try to work along two or three lines, I've just mentioned it: to have a more multi-polar world, reinforcing groups like BRICS, that's essential for Brazil and I think it's essential for the other member groups. We'll work on integration in South America and we'll develop multi-polar relations with all the world, with great emphasis in Africa because Africa is very near to Brazil.