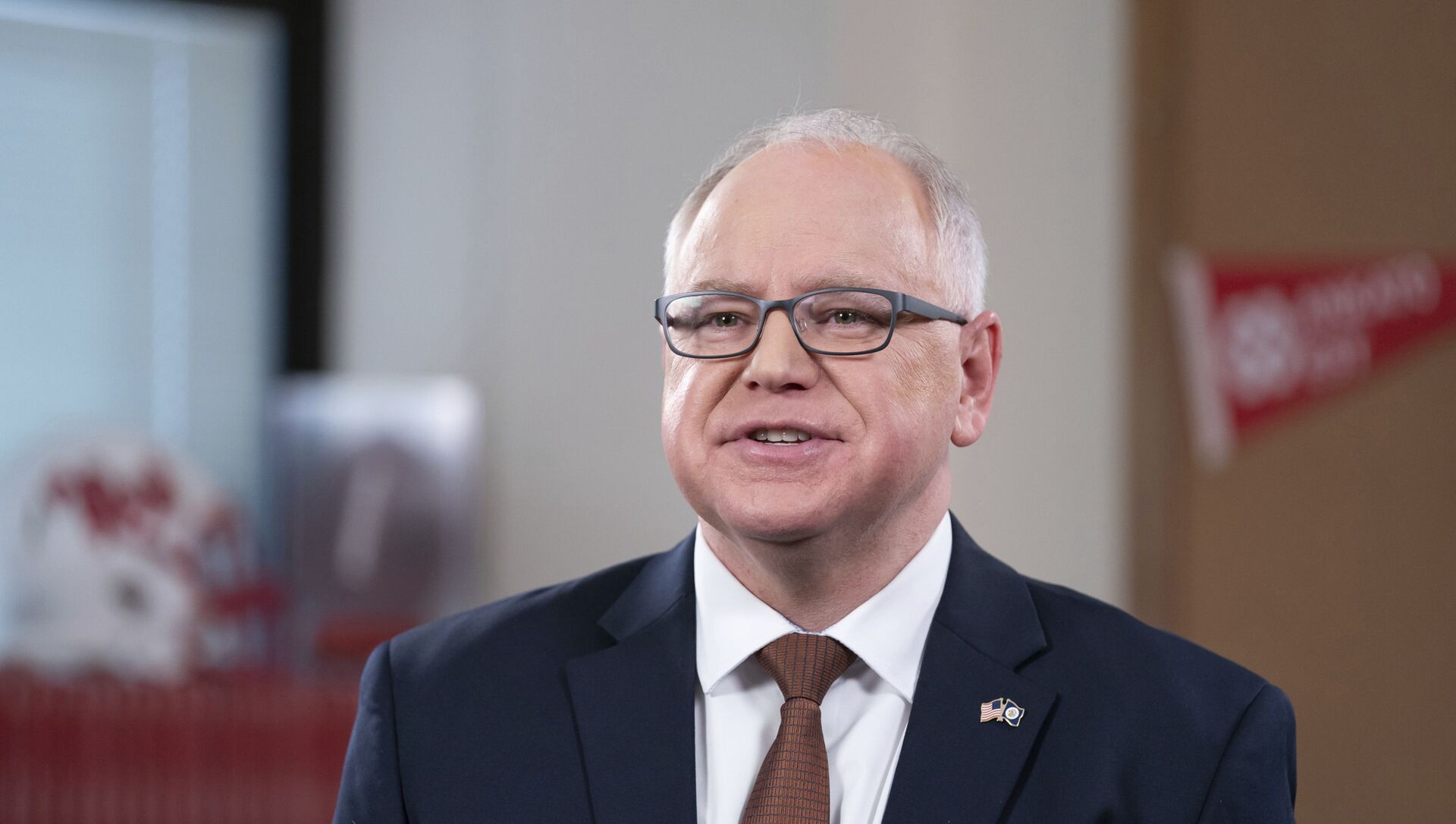 Kirill Kurevlev
Correspondent
All materialsWrite to the author
Tensions are running high in Minnesota as Derek Chauvin's trial, in which he is charged with killing Black man George Floyd in late May 2020, enters its third week on Monday in Minneapolis. Added to this was the killing of 20-year-old Dante Wright, also a Black citizen, by a police officer.

Republicans of the US state of Minnesota chastised Democrat Governor Tim Walz for appearing to blame law enforcement for the death of Daunte Wright before the investigation was completed.

The governor took it to Twitter on Sunday with his statement regarding the events and the public outrage that followed. In the statement, Walz said that he was "closely" monitoring the situation, and he and his wife "are praying for Daunte Wright’s family as our state mourns another life of a Black man taken by law enforcement."

I am closely monitoring the situation in Brooklyn Center. Gwen and I are praying for Daunte Wright’s family as our state mourns another life of a Black man taken by law enforcement.

​Shortly after Waltz was accused by the Minnesota GOP of "casting blame perpetuating a narrative of an unknown situation," adding that the governor should have not "fan the flames in challenging times".

"A Governor's responsibility is minimize turmoil, not fan the flames in challenging times," the party chairwoman Jennifer Carnahan said in a statement released on Monday. "We pray for the family and friends of Daunte Wright, and hope for a expediency in the investigation process. For a Governor to lead by casting blame and perpetuating a narrative of an unknown situation is not only irresponsible, it's conduct unbecoming a Governor. We call on Governor Tim Walz to censure himself if he is not able to practice the discipline needed to lead our state in a way that helps us move forward together."

The Republicans of Saint Paul, Minnesota, also expressed their discontent with Walz's remarks, noting that he should have waited until the investigation was over before making a statement.

"Governor, your words fuel fire for protesters. You of all people should know to wait until the [Department of Public Safety Bureau of Criminal Apprehension] finish their investigation. In your tweet, you should have stopped after the words, 'praying for Duante [sic] Wright’s family.' Everything after that was inappropriate," the organization wrote on Twitter.

Governor, your words fuel fire for protesters. You of all people should know to wait until the @MnDPS_BCA finish their investigation. In your tweet, you should have stopped after the words, “praying for Duante Wright’s family”. Everything after that was inappropriate.@MnDPS_DPS

​Some social media users also called on the governor and others to wait until the investigation is complete and not to jump to conclusions about the cause of the killing.

Everyone needs to read @CrimeWatchMpls to get the truth on this and other incidents in our state. The man had an arrest warrant and wouldn't go into custody. He fled the police and ended up crashing into another car. pic.twitter.com/m1BN0kzSP2

Daunte Wright shouldn’t have run to his car to retrieve what was presumably a gun in the middle of the arrest.

Every 53 hours, a cop gets shot on duty that way. I’ve never seen you post a tribute to any of them.

The governor has already decided that he was a pure innocent angel. Who would want to be a police officer in this state?

​After 20-year-old African American Daunte Wright was shot by a police officer during a traffic stop in Brooklyn Center, Minnesota, just 10 miles from where Derek Chauvin had George Floyd pinned to the pavement last May, Minneapolis erupted in looting and violent riots late Sunday. The police had to use tear gas to disperse the protesters.

According to media reports, Wright's identity and race were not immediately revealed by Brooklyn Center Police. Officers stopped a person just before 2 pm on Sunday, the statement from Brooklyn Center Police said. Police attempted to apprehend the driver after discovering he had an outstanding warrant, but the driver, however, re-entered the car and sped away. The driver was hit by a bullet fired by an officer. According to police, the car traveled several blocks before colliding with another vehicle. A female passenger suffered injuries that were not life-threatening.

What to expect today: "I do expect... that there will be more National Guard," DPS Commissioner John Harrington told reporters early this morning.

The Brooklyn Center Police Department said it had requested an investigation from the Bureau of Criminal Apprehension. Body cameras were presumably worn by police officers, and dash cameras are believed to have been turned on during the incident.