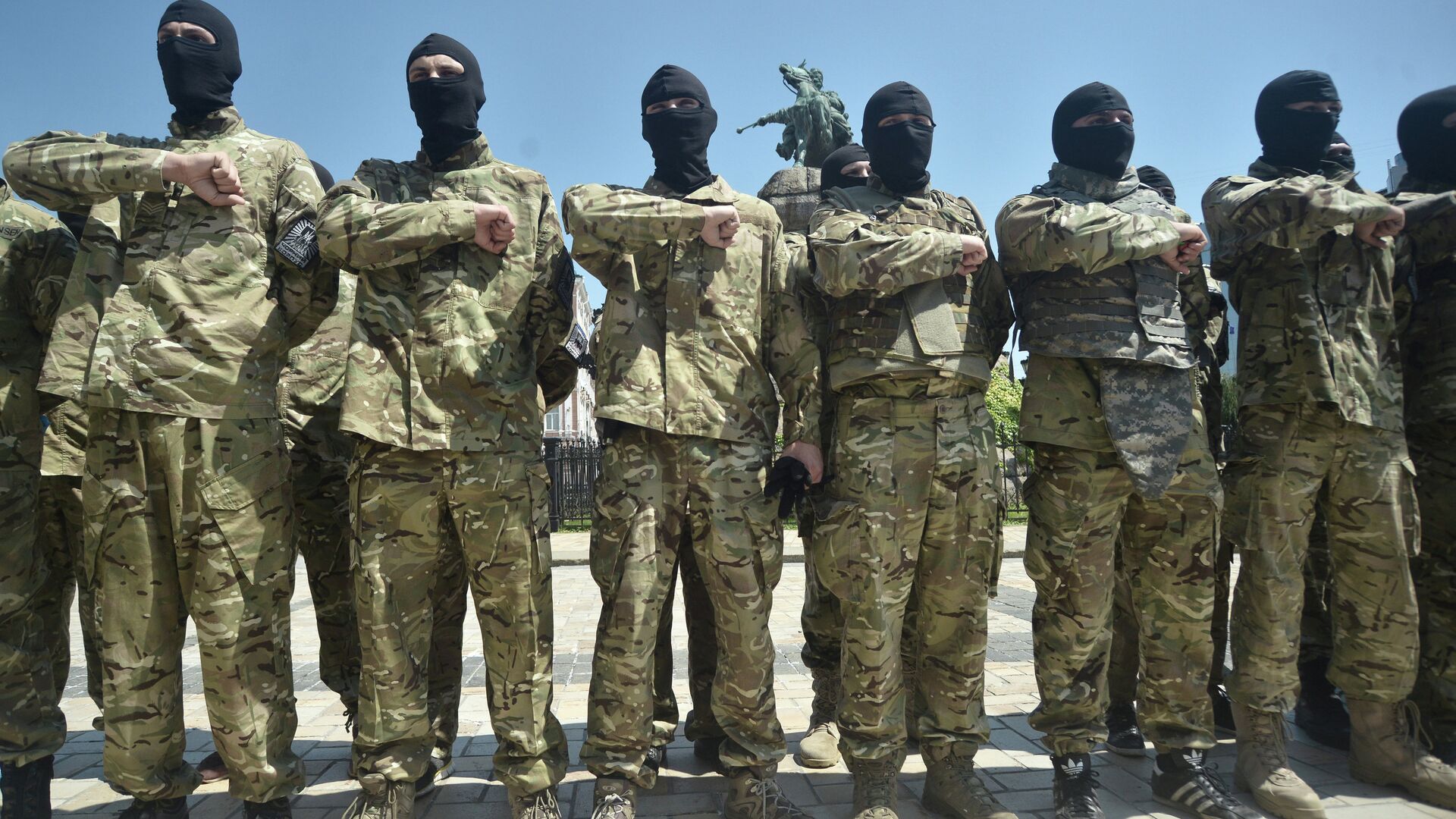 Oleg Burunov
All materialsWrite to the author
Ukraine has been making worldwide headlines in the past few weeks, with the government amassing military forces on the border of its breakaway republics in the country's east, and the president boasting that only Kiev's membership in NATO will guarantee the peace in the region.

Over the last week, the Russian officials have been vocal about the dramatic increase in tensions in eastern Ukraine, with Kremlin spokesman Dmitry Peskov saying that the situation in the war-hit country remains "unstable" and stressing that full-scale hostilities could resume.

“If a civil war and full-scale hostilities resume near our borders, this will pose a threat to the security of the Russian Federation. President Putin earlier said that in case of resumption of the hostilities and a potential repeat of a human catastrophe similar to that of Srebrenica, no country will be unaffected. And all countries, including Russia, will take measures to prevent such tragedies from happening again”, Peskov stressed.

The Minsk peace agreements, inked in 2015, stipulate preserving the territorial integrity of Ukraine in exchange for granting a special status for Russian native speakers, as well as the decentralization of the special status in the regions and the withdrawal of military hardware from the line of contact, among other points. However, the resumption of hostilities would mean Ukraine’s automatic exit from the Minsk accords.

As tensions escalate in eastern Ukraine, the real danger is not a Russian invasion, but that the Ukrainian govt will misinterpret #US signals of support as a green light for an assault on the rebel republics in #Donbass.
Military equipment of the #Ukraine army in the area⤵️ pic.twitter.com/xM2VTtwjVe

Kiev authorities have been beefing up a military presence near the borders of the breakaway republics, with President Zelensky claiming that the accepting Ukraine into NATO is the only way out of the incipient military crisis.

Russian President Vladimir Putin has made it clear that Moscow will not allow the West to use any former Soviet republics against the Russian Federation, and will prevent the use of force against the people of Donbass, where many have Russian passports.

In the past seven years, the animosity towards Russia in Ukraine has become rampant, with authorities in the country showing an unwillingness to counteract various militia groups with neo-Nazi links and conducting show trials of reporters and media who dare to raise their voices against Kiev policy.

Since the 2014 coup, political organizations associated with neo-Nazis have entered Ukrainian mainstream politics, with most gaining notoriety for belligerent rhetoric toward the population of the country’s east, as well as for their eager participation in the civil war.

Azov Batallion, originally a volunteer militia formed in May 2014 shortly after the coup in Kiev caused a standoff between supporters of the new authority and its opponents.

The group, which took part in subsequent hostilities in Donbass, was then incorporated into the National Guard of Ukraine, although Azov members continued to wear neo-Nazi and SS symbols and regalia and express neo-Nazi views. 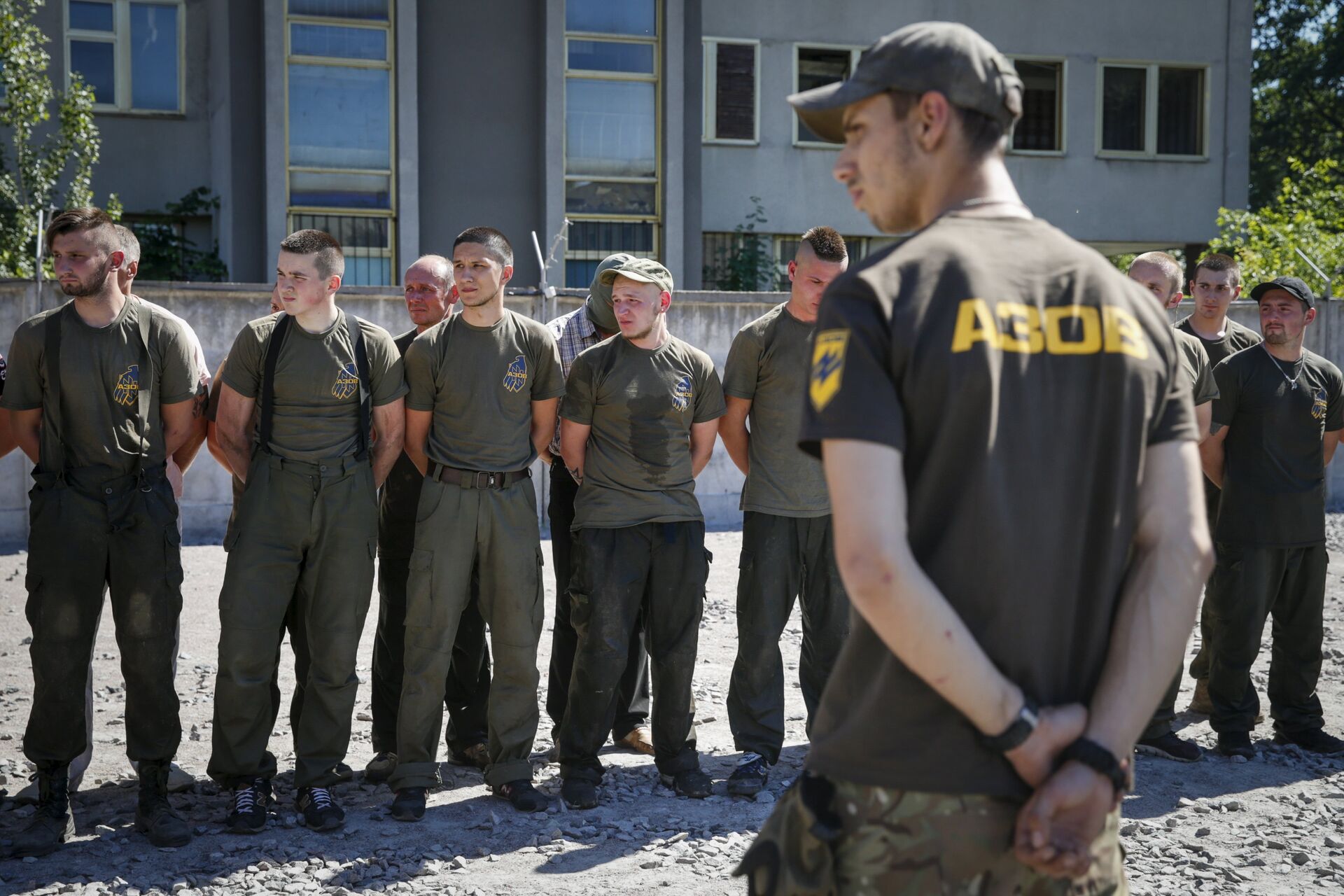 New volunteers for the Ukrainian interior ministry's "Azov" battalion line up after taking part in an exam before heading to the frontlines in eastern Ukraine, at the battalion's training centre in Kiev, Ukraine, June 13, 2015
© REUTERS / Valentyn Ogirenko

Ukrainian authorities did not try to hide that in 2014, Azov comprised neo-Nazi-leaning volunteers from an array of countries including Sweden, Italy, Russia, France, Belarus, Canada and Slovenia.

In 2016, the Office of the UN High Commissioner for Human Rights (OHCHR) accused the Azov Battalion, also known as the Azov Regiment, of committing war crimes such as mass looting, unlawful detention, and torture. The accusations were preceded by Azov members taking part in Donbass hostilities between 2014 and 2015. Right now, the Azov "Special Operations Regiment" is engaged in the Ukrainian army’s counter-reconnaissance and special weapons operations.

Another infamous group is the Right Sector*; it was originally set up as an alliance between Ukraine’s nationalist groups in November 2013, and a year later announced that they had formed a special “Donbass” battalion for its paramilitary operations in the breakaway region. 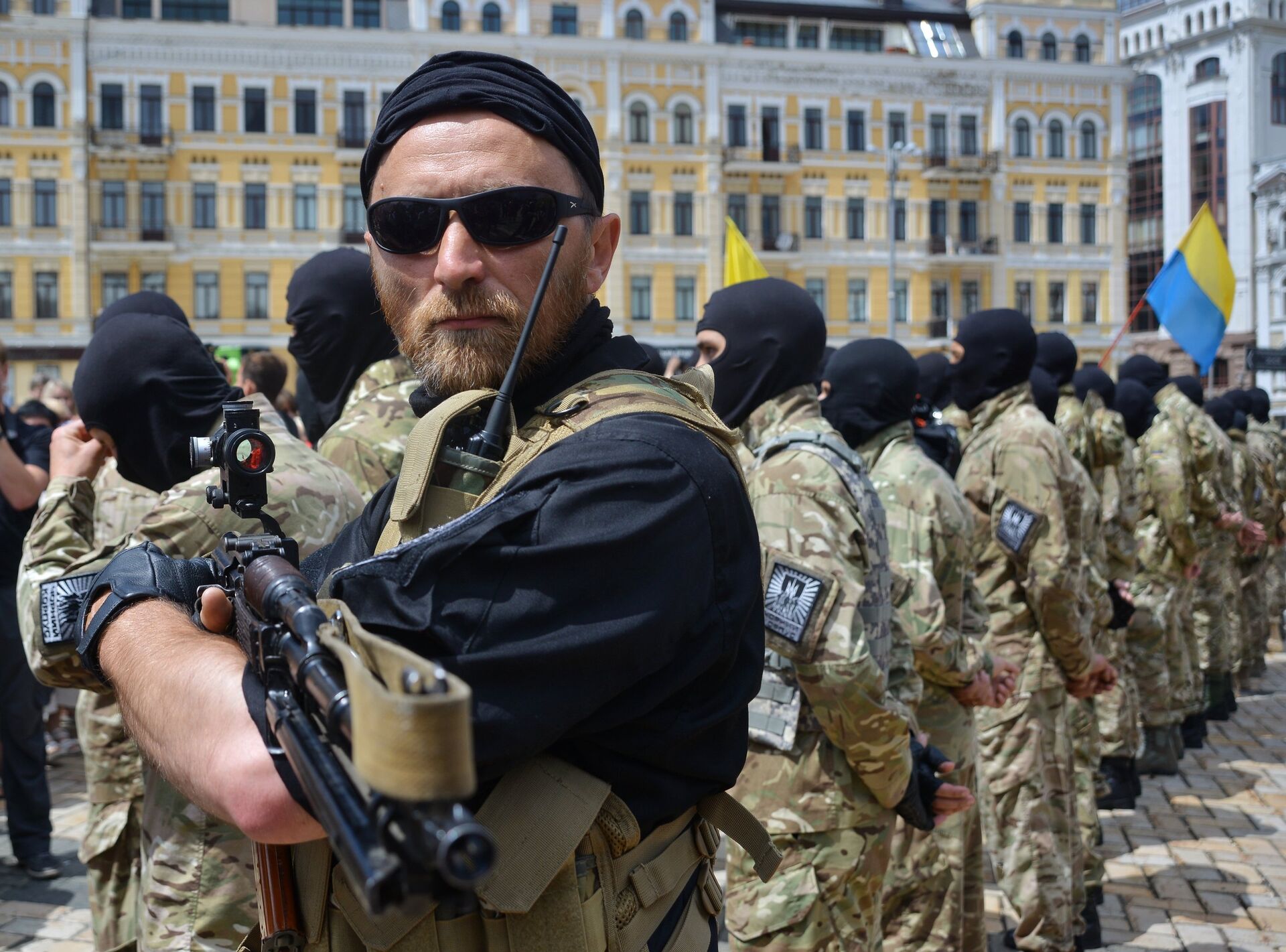 The group-turned-political-party describes one of its aims as being helpful to build a “nationalist Ukrainian state and stage a nationalist revolution” in the county. Ex-Right Sector leader Dmytro Yarosh described himself as a follower of the notorious Nazi collaborator Stepan Bandera.

The all-Ukrainian union of Svoboda is another nationalist political party in Ukraine, and is widely considered to be neo-Nazi and anti-Semitic. In 1996, Svoboda turned into the Social-National Party of Ukraine (SNPU), and its members continue to wear the neo-Nazi Wolfsangel symbols as “ideas of the nation”.

On 9 May, 2011, SNPU activists tried to sabotage festivities dedicated to WWII Victory Day in the western Ukrainian city of Lviv by spitting in veterans’ faces, throwing stones and bottles at them and publicly burning Soviet flags. During the Donbass conflict, SNPU initiated the creation of several military units that took part in the hostilities.

The European Parliament earlier voiced concern over what it described as SNPU’s “racist, anti-Semitic and xenophobic views”, which “go against the EU's fundamental values and principles”.

Ukrainian nationalists are suspected of being behind the 2014 tragedy in the Ukrainian city of Odessa, where dozens of people were burned alive inside a local trade union house.

On 2 May, 2014, a group of Ukrainian nationalists, supporters of the newly-installed Kiev government, clashed with demonstrators in Odessa who attended the staged protest against the coup government. Anti-government protesters attempted to hide in Odessa's Trade Union House, which was then set on fire by Molotov cocktails hurled inside.

President #Putin: Who remembers the victims of the events in the Trade Unions House in Odessa? Does anyone even remember this? They cite some investigation conducted by the Ukrainian official authorities, but in reality there is no investigation. There’s only silence... pic.twitter.com/UzJ2NTSMlK

The clashes and fire killed 48 people, including seven women and one minor, while the overall number of casualties exceeded 250, according to the Office of the United Nations High Commissioner for Human Rights (OHCHR). According to media reports, 26 people, from both sides, are accused in the case. The case has been on trial since November 2014, and hearings are often rescheduled.

International organizations have repeatedly warned Kiev that there is no progress in the investigation of the Odessa tragedy, demanding that those responsible must be brought to justice.

Ukrainian neo-Nazi groups are also suspected on being involved in attacks on journalists in Ukraine, which show no signs of abating.

Sergei Tomilenko, the head of the country's National Union of Journalists, said that the past three years have seen about 250 attacks, some deadly, on media workers in Ukraine.

In April 2015, Ukrainian journalist Oles Buzina, who was known for his criticism of Kiev policy and support of closer ties between Ukraine, Belarus, and Russia, was murdered near his apartment in the Ukrainian capital.

20 July, 2016, saw an attack on journalist Pavel Sheremet, who died in Kiev in a car explosion. Investigators suggest that Sheremet was killed due to his “professional activity on Ukrainian territory and beyond”. 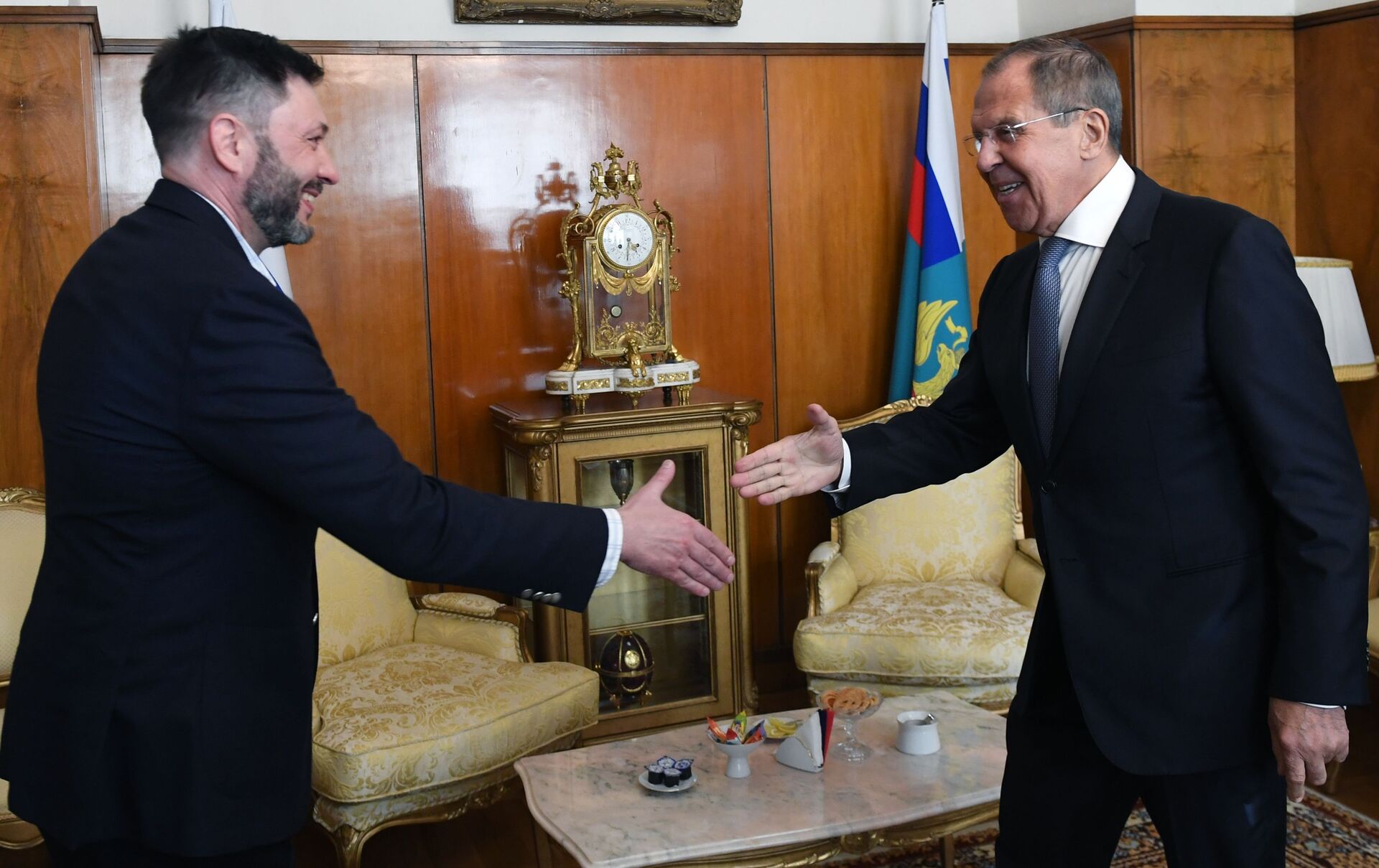 RIA Novosti Ukraine editor-in-chief Kirill Vyshinsky was detained in Kiev on 15 May, 2018, on suspicion of supporting anti-government forces in Donetsk and Lugansk in Donbass, a charge which he denied, pointing out that he had covered both sides of the conflict. He was released from prison pending trial on 28 August, 2019, and arrived in Moscow following a detainee swap with Ukraine.

Last year, Ilkka Kanerva, a representative of the Organisation for Security and Cooperation in Europe (OSCE) observer mission in Ukraine, expressed concern over the lack of adequate security for journalists in the country.

Shutdown of Media Organizations in Ukraine

Attacks on journalists come amid Kiev’s crackdown on freedom of speech, with Ukrainian President Volodymyr Zelensky in February ordering to shut down three domestic television channels, 112 Ukraine, NewsOne and ZIK, that are accused of spreading “Russian disinformation”.

Kiev also introduced restrictions against a spate of other channels, including TV Vybor, Novyi TV Format, Partner TV, Ariadna TV and some others. The channels described the punitive actions against them as "political reprisals against objectionable media."

They were echoed by Kremlin spokesman Peskov who condemned the moves, stressing that “restrictions and even bans on TV channels are something that does not meet international norms and standards, nor a common understanding of media freedom”.

The European Parliament warned Kiev against “an attack on media freedom”, which could lead to “widespread government interference in media content and journalistic activities”.

Russia
Russia Urges US to Take More Responsible Approach on Ukraine Instead of Escalating Situation
The parliament also called on Kiev to "put an end to politically motivated crackdown on media channels, also stressing journalists in Ukraine should be protected from bullying and intimidation by neo-Nazi groups.

As neo-Nazi ideas spread in Ukraine, the country’s denazification is of paramount importance and may include an array of steps including the process of federalization, as well as punishment of those responsible for conducting the so-called Anti-Terror Operation in Donbass between 2014 and 2018.

*The Right Sector is an extremist group outlawed in Russia