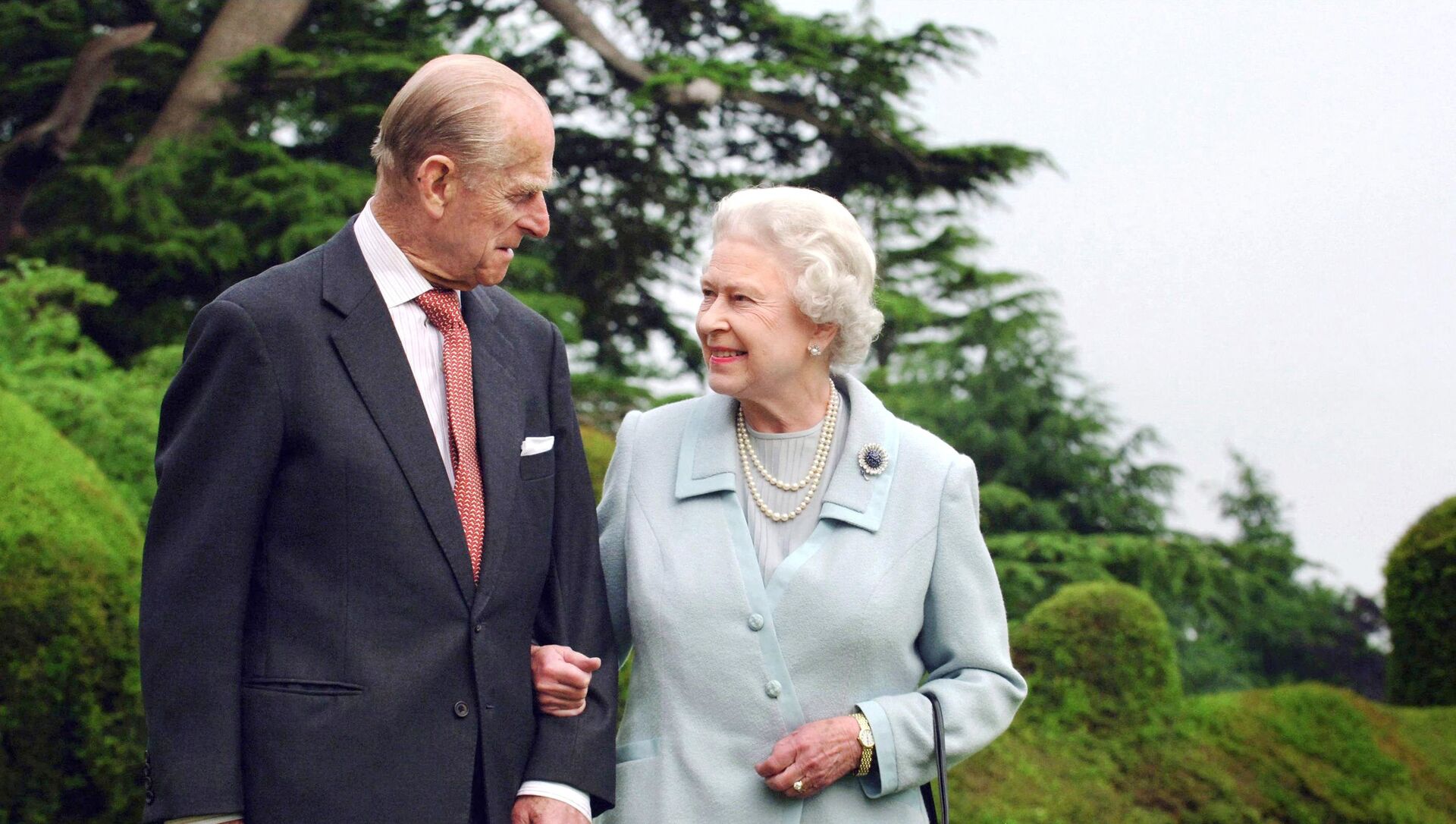 Max Gorbachev
All materialsWrite to the author
According to a statement released by the Royal Family, the Duke of Edinburgh passed away peacefully on 9 April, two months before his 100th birthday. Earlier this year, he spent a month in hospital where he was treated for an infection and underwent a heart procedure.

Prince Philip’s death has "left a huge void" in the Queen’s life, said the monarch’s second son Prince Andrew. Commenting on his father’s death, the Duke of York said that Britain has lost the grandfather of the nation and that the Royal Family was feeling a great sense of loss following the royal’s passing.

Prince Andrew made the statement as he and other members of the family were attending a church service at the Royal Chapel of all Saints in Windsor.

After attending morning service at The Royal Chapel of All Saints, The Duke of York, The Earl and Countess of Wessex, and Lady Louise met Windsor Estate workers to thank them for their support, particularly over the last few days. pic.twitter.com/uSUVQN2Jbo

​Earlier today, the Queen’s first son, Prince Charles spoke to reporters and thanked members of the public for their support in this difficult time for the family.

"He would have been amazed by the reaction and the touching things that have been said about him. From that point of view we are, my family, deeply grateful for all that. It will sustain us in this particular loss and at this particularly sad time", Prince Charles said.

On Saturday the Royal Family’s account on Twitter shared a photo of Queen Elizabeth II and Prince Philip with a quote of her speech she made on the golden anniversary of their wedding in 1997. The two were married for 73 years.

“He has, quite simply, been my strength and stay all these years, and I, and his whole family, and this and many other countries, owe him a debt greater than he would ever claim, or we shall ever know.”

-Her Majesty The Queen, 1997. pic.twitter.com/wbSldSavNA

Tributes From World Leaders and Details of the Upcoming Funeral

Heartfelt tributes continue pouring in from across the globe for the Duke of Edinburgh, who has been praised for his remarkable service to Britain, the Commonwealth, and the Queen. Over his career he is said to have fulfilled more than 22,000 royal engagements.

French President Emmanuel Macron called Prince Philip’s life "exemplary" and said it was "defined by bravery, a sense of duty, and commitment to the youth and the environment". Chancellor Angela Merkel said the royal’s straightforward nature and "his sense of duty will remain unforgotten".

US President Joe Biden called the royal "a heck of a guy" and praised his bravery during the Second World War. "99-years old, he never slowed down at all, which I admire the devil of", President Biden said.

Hundreds of people lined up on Tower Bridge during gun salutes that were fired on 10 April to mark the royal’s death.

To mark the death of His Royal Highness, The Duke of Edinburgh, at 12pm BST today a gun salute began firing from the Tower of London.

In total 41 rounds are being fired, with 1 round every minute, in unison with other saluting batteries across the UK. pic.twitter.com/0j3lmRwQ8u

​Although the public has been encouraged not to lay bouquets of flowers at Windsor Castle, and instead make a donation to charitable organisations, people continue bringing flowers.

“The poor Queen all on her own in there”... overheard at the gates of Windsor Castle. Lots of families here today taking photos, laying flowers and paying their respects to #PrincePhillip pic.twitter.com/DjtAmhZmyH

The funeral will be held on 17 April at St George's Chapel, Windsor and due to coronavirus restrictions will only be attended by members of the Royal Family. Upon Prince Philip’s wishes, there will be no state funeral and no lying-in-state ceremony, where members of the public would have been able to pay their respects.

The ceremony will begin with a national minute’s silence at three o’clock (local time). Members of the family will walk behind the coffin, which will be transported in a specially-modified car the Duke of Edinburgh himself designed. The Queen will travel to the chapel separately. 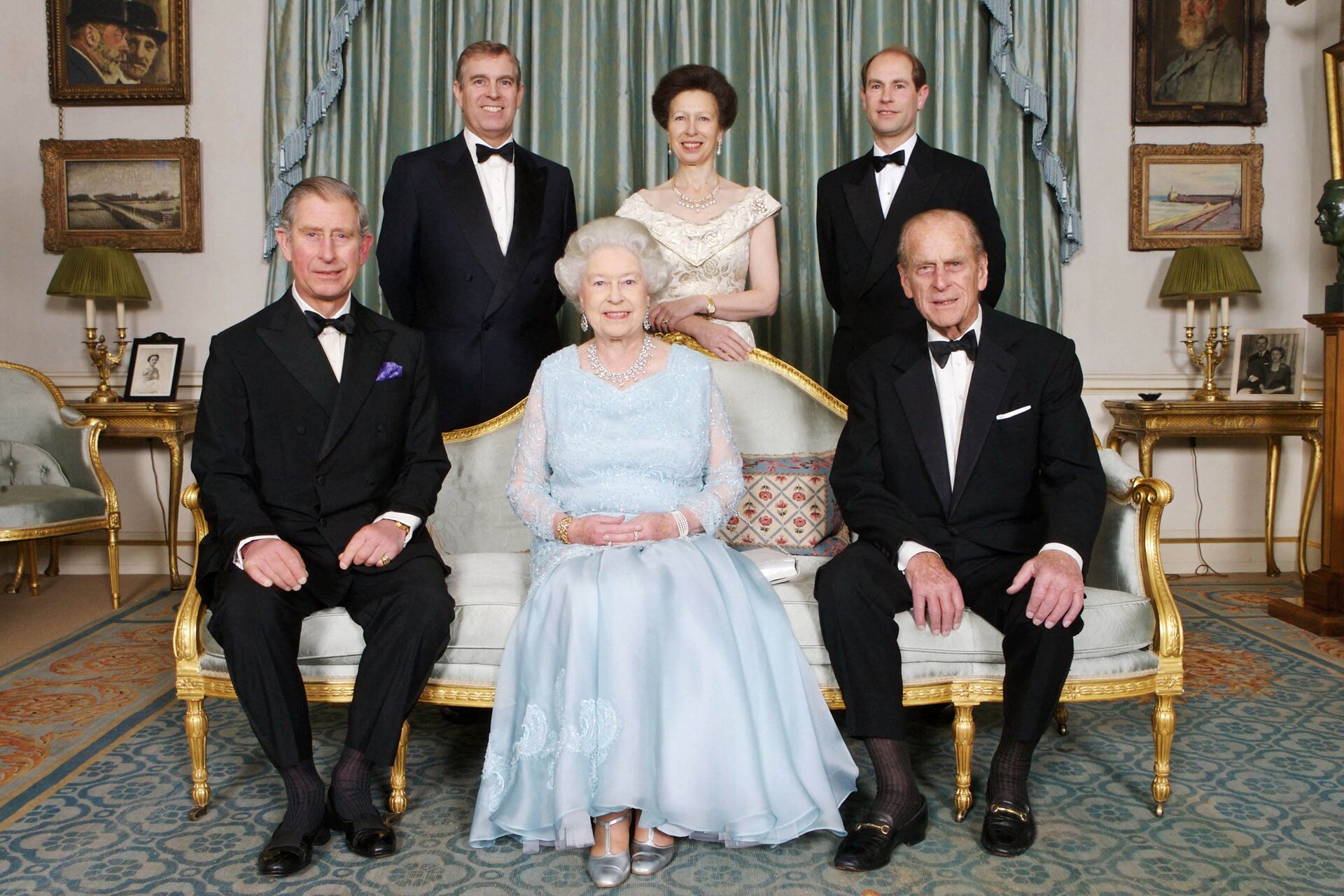 (FILES) In this file photo taken on November 18, 2007 Britain's Queen Elizabeth II (Centre Foreground) and Britain's Prince Philip, Duke of Edinburgh (Right Foreground) are joined at Clarence House in London by Prince Charles, (Left Foreground) Prince Edward, (Right Background) Princess Anne (Centre Background) and Prince Andrew (Left Background) on the occasion of a dinner hosted by HRH The Prince of Wales and HRH The Duchess of Cornwall to mark the forthcoming Diamond Wedding Anniversary of The Queen and The Duke, 18 November 2007.
© AFP 2022 / TIM GRAHAM

The Duke of Edinburgh was admitted to hospital on 16 February as a precautionary measure. Reports say he travelled to King Edward VII Hospital in London by car and walked into the facility unaided. Later, the Royal Family said he was treated for an infection. During this time it was reported that the royal summoned his son to discuss the future of the British monarchy. Several weeks later he was transferred to another hospital in London where he underwent a heart procedure. He was discharged on 16 March.