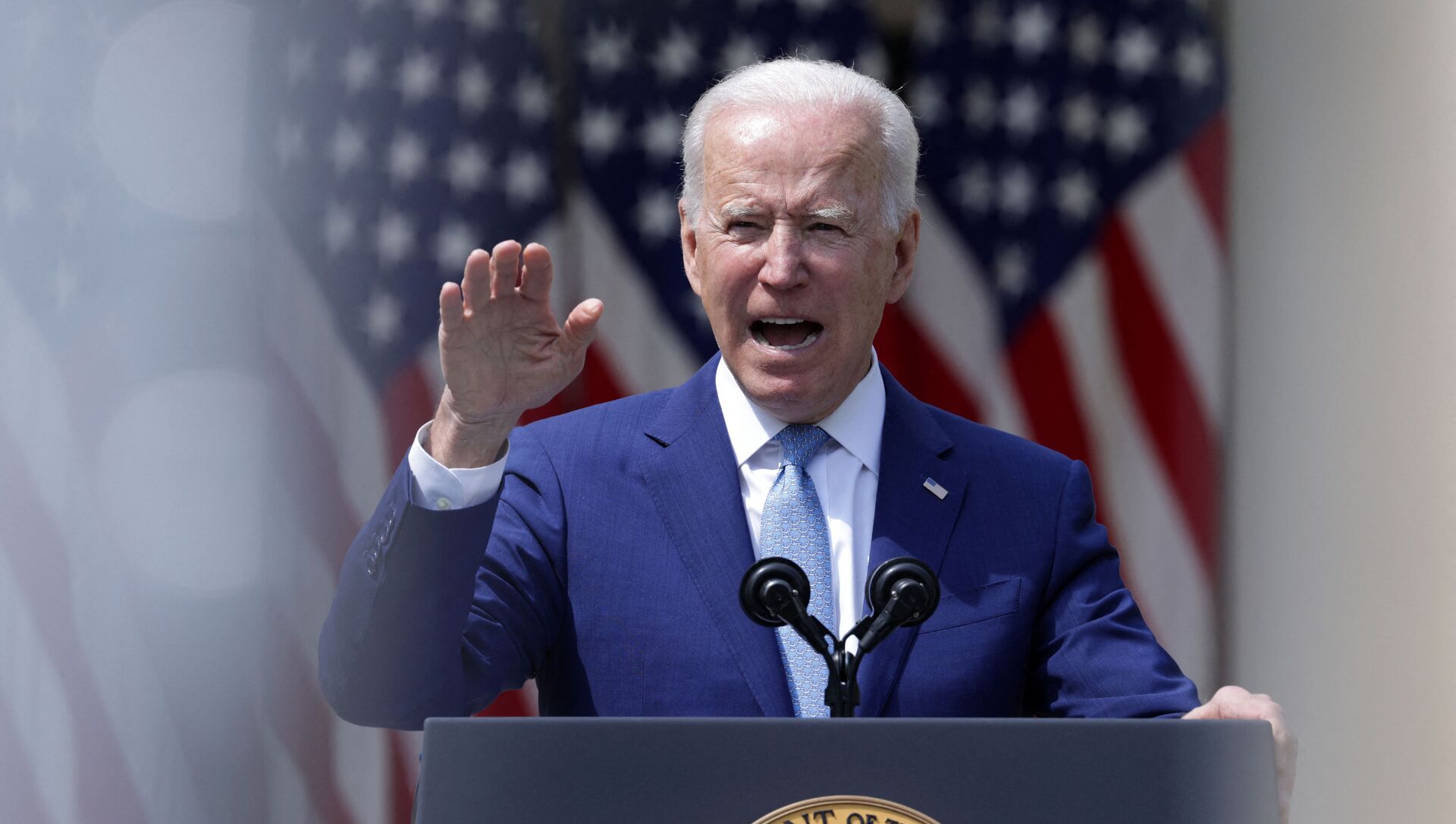 Oleg Burunov
All materialsWrite to the author
On Thursday, the US President announced a spate of executive orders and requests for legislative action to address what he described as “the epidemic” of gun violence in the US.

President Joe Biden has claimed that his administration’s steps related to gun control in the US do not run counter to the Second Amendment, which stipulates that the right of the American people to keep and bear arms will not be infringed.

The POTUS asserted that nothing he is about to recommend “in any way impinges on the Second Amendment”, adding, ”these are phony arguments suggesting that these are Second Amendment rights at stake from what we're talking about”.

At the same time, he argued that “no amendment to the Constitution is absolute” and that “from the very beginning, you couldn't own any weapon you wanted to own”.

President Biden took the oath to uphold and defend our Constitution. Now he's saying that "no amendment to the Constitution is absolute."

Which is it, Joe? pic.twitter.com/pzz3b5I02g

The president then again struck a conciliatory tone by claiming “the idea is just bizarre to suggest that some of the things we're recommending are contrary to the Constitution”.

The remarks were followed by White House spokesperson Jen Psaki promising that Biden would soon announce more anti-gun violence executive actions on top of the initial wave unveiled on Thursday.

“Today the Administration announced initial actions to address gun violence, there will be more. That is absolutely his commitment. He also will use the power of his presidency, his voice, his political will to advocate for actions in Congress,” Psaki added.

Media reports have meanwhile pointed to the fact that Biden is enacting gun control-related measures through an executive order, which apparently means that he does not need approval from Congress when it comes to the implementation of these steps.

The reports came as the National Rifle Association (NRA) dubbed the measures “extreme”, while Texas Governor Greg Abbott described them as "a new liberal power grab to take away our guns” and pledged not to allow the steps in his state.

The NRA, in turn, also pointed out that Biden had picked Merrick Garland as attorney general and David Chipman as the director of the Bureau of Alcohol, Tobacco, Firearms and Explosives (ATF).

“By appointing the anti-gun Merrick Garland as attorney general and nominating David Chipman — formerly a senior staffer at the leading gun control lobby —  to head ATF, Biden has made clear his sights are set on restricting the rights of law-abiding gun owners while ignoring criminals and foregoing substantive measures that will actually keep Americans safe,” the NRA said in a statement.

The association also claimed that Biden’s proposals “could require law-abiding citizens to surrender lawful property and enable states to expand gun confiscation orders”, vowing that it would fight these “ill-conceived executive actions”.

The NRA was echoed by Kevin McCarthy, the top Republican in the House, who tweeted on Thursday that Biden is due to announce “his attempts to trample over our constitutional 2A rights by executive fiat”.

White House Announces Six 'Initial Actions to Address the Gun Violence'
“He is soft on crime, but infringes on the rights of law-abiding citizens,” McCarthy argued, insisting in a separate tweet that the POTUS “has ordered the DoJ to issue new rules that will surely result in unconstitutional overreach”.

The lawmaker vowed that Republicans “will strongly oppose and pursue every option—be it legislative or judicial—to protect the right to keep and bear arms from infringement by this Administration”.

The remarks followed Biden rolling out an array of “initial” actions on Thursday to tackle gun violence in the US, including a move to stop the proliferation of so-called ghost guns, those that do not have a serial number, cannot be traced by law enforcement and are often distributed as self-assembly kits.

The Justice Department will also propose a rule to further regulate the use of stabilising braces that turn handguns into short-barrelled rifles. Additionally, the department will publish a model "red flag" legislation for states that can be used to bar people of concern from accessing firearms.