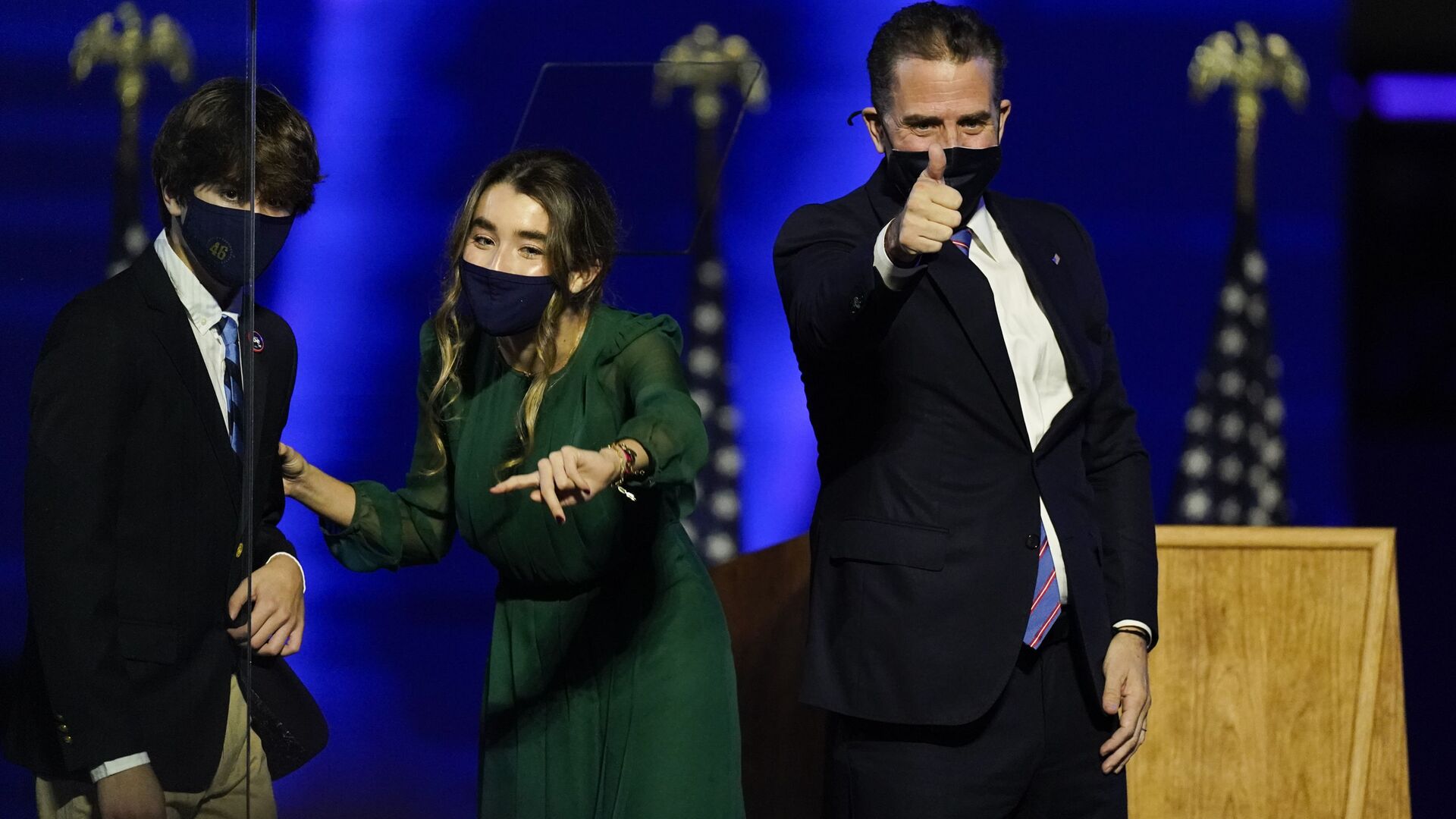 Ekaterina Blinova
All materialsWrite to the author
The content of the "hard drive from hell" allegedly originating from Hunter Biden's laptop "appears to be authentic," concluded cyber forensics experts at Maryman & Associates commissioned by the Daily Mail to examine the device. Still, although vowing to lift the veil of secrecy on the Bidens' story, the newspaper appears to miss the best bits.

On Thursday, the Daily Mail released a minuscule part of a trove containing 103,000 text messages, 154,000 emails and more than 2,000 photos, in a bid to show what Hunter Biden's "tell-all" memoir "Beautiful Things" failed to touch upon.

More Dirty Linen but Nothing About Alleged 'Pay-to-Play' Scheme

The Daily Mail's article, which came on the heels of the publication of Hunter Biden's opus, has exposed a new portion of damning facts about the president's son, including blowing hundreds of thousands on drugs and prostitutes, narrowly avoiding a tangle with law enforcement and begging his father, Joe Biden, to run for presidency to save his reputation.

In association with "Beautiful Things" which contains a story of Hunter's addiction to drugs and his ill-considered decision to join Ukrainian gas firm Burisma, the Daily Mail's expose has inflicted further damage to the image of President Joe Biden's offspring. Nevertheless, although promising to reveal what wasn't in Hunter Biden's book, the media outlet left the juiciest part of the scandal unexposed.

Indeed, neither the book, nor the article considers Joe Biden's possible knowledge of Hunter's lucrative financial dealings with foreign tycoons at the time his father served as Obama's vice-president, something The New York Post alleged in October 2020 presenting the "hard drive from hell."

It wasn't about Hunter. It was about Joe. https://t.co/6QZ6OiWFgj

On 15 October 2020, The Post quoted an email exchange between businessmen James Gilliar and Tony Bobulinski, a Hunter associate, who discussed an unspecified business venture with the Chinese firm and allocation of "20 [percent] for H[unter]" and "10 percent" for "the big guy". Speaking to Tucker Carlson on 27 October 2020, Bobulinski insisted that the "big guy" had been none other than Joe Biden.

On 7 April 2021, The National Pulse broke yet another piece of evidence apparently indicating Joe Biden's "involvement" in his son’s "lucrative business dealings in Ukraine" with natural gas firm Burisma.

​In a newly unearthed email, Rosemont Seneca Partners employee Joan K. Peugh informs Hunter Biden that he is scheduled for a White House meeting on 16 April 2014. Rosemont Seneca Partners was founded by Hunter Biden, Christopher Heinz, and Devon Archer in 2009. Citing Obama White House visitor logs, The National Pulse confirms that Hunter's business partner Devon Archer and his son Luke Archer were admitted to the West Wing to meet then Vice-President Biden on the same day at 11:30 am (ET).

What's more important, continues National Pulse, is that Joe Biden's apparent meeting with Hunter, Devon and Luke occurred "only five days before Joe Biden took his second vice-presidential trip to Ukraine to deliver a substantial package of assistance to Ukraine, including energy security, some of which directly benefited the company – Burisma." And, after that, in May 2014, Hunter Biden and Devon Archer started receiving wire transfer payments from Burisma, according to Department of Treasury records.

Earlier, the Senate Homeland Security Governmental Affairs Committee also singled out the 16 April 2014 meeting as suspicious in its report on Hunter Biden. Coincidentally, after Hunter Biden's admission to Burisma board, British officials unblocked earlier frozen $23 million from the London bank accounts of the gas firm's owner, Mykola Zlochevsky, on 21 January 2015. 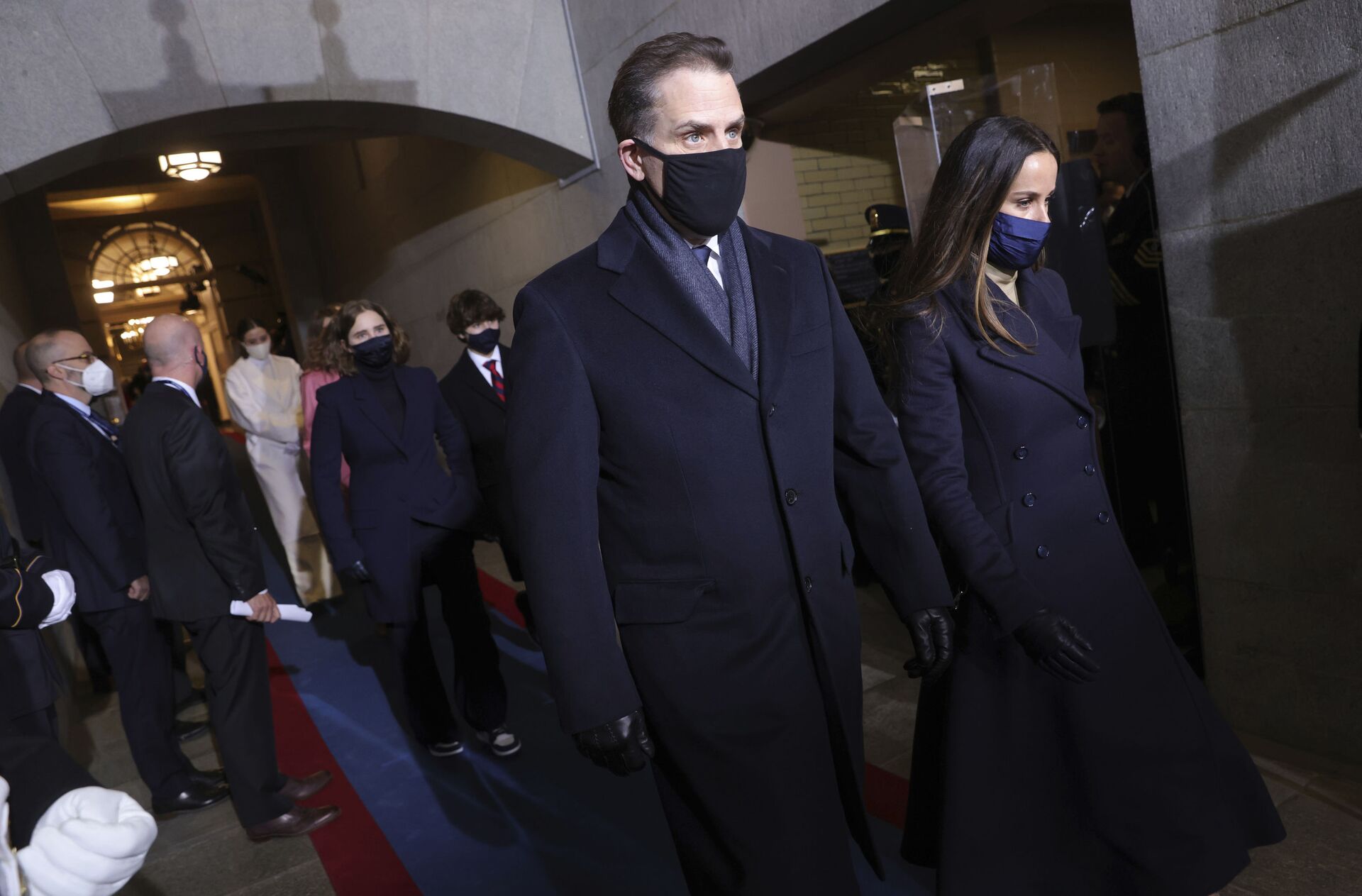 In this Wednesday, Jan. 20, 2021, file photo, Hunter Biden arrives at the inauguration of U.S. President-elect Joe Biden on the West Front of the U.S. Capitol in Washington
© AP Photo / Win McNamee

Hunter's Laptop: Neither Stolen, Nor 'Hacked'

The "hard disk from hell" first emerged October 2020, ahead of the November presidential election, when the New York Post dropped a series of bombshells about the Biden family which were, however, largely ignored or groundlessly branded as "Russian disinformation" by the media at the time.

Only took the corporate media 7 months to report the things we’ve been saying for... 7 months. https://t.co/CYH6jL0Fs6

​Before the Daily Mail's Thursday exposure, Hunter Biden told CBS on 4 April, while promoting his new book, "Beautiful Things," the laptop "could be" his.

However, Della Rocca, a lawyer of the owner of the Delaware repair shop where the infamous laptop had ended up, refuted Hunter's account of the event:

"I can tell you that Hunter was in the shop twice … He brought three laptops in, ended up leaving one for the recovery of the data… So he — it was him, he did that, he signed the work order. And so there's no doubt that he knows it's his and he's the one that dropped it off," Rocca told investigative journalist John Solomon earlier this week.