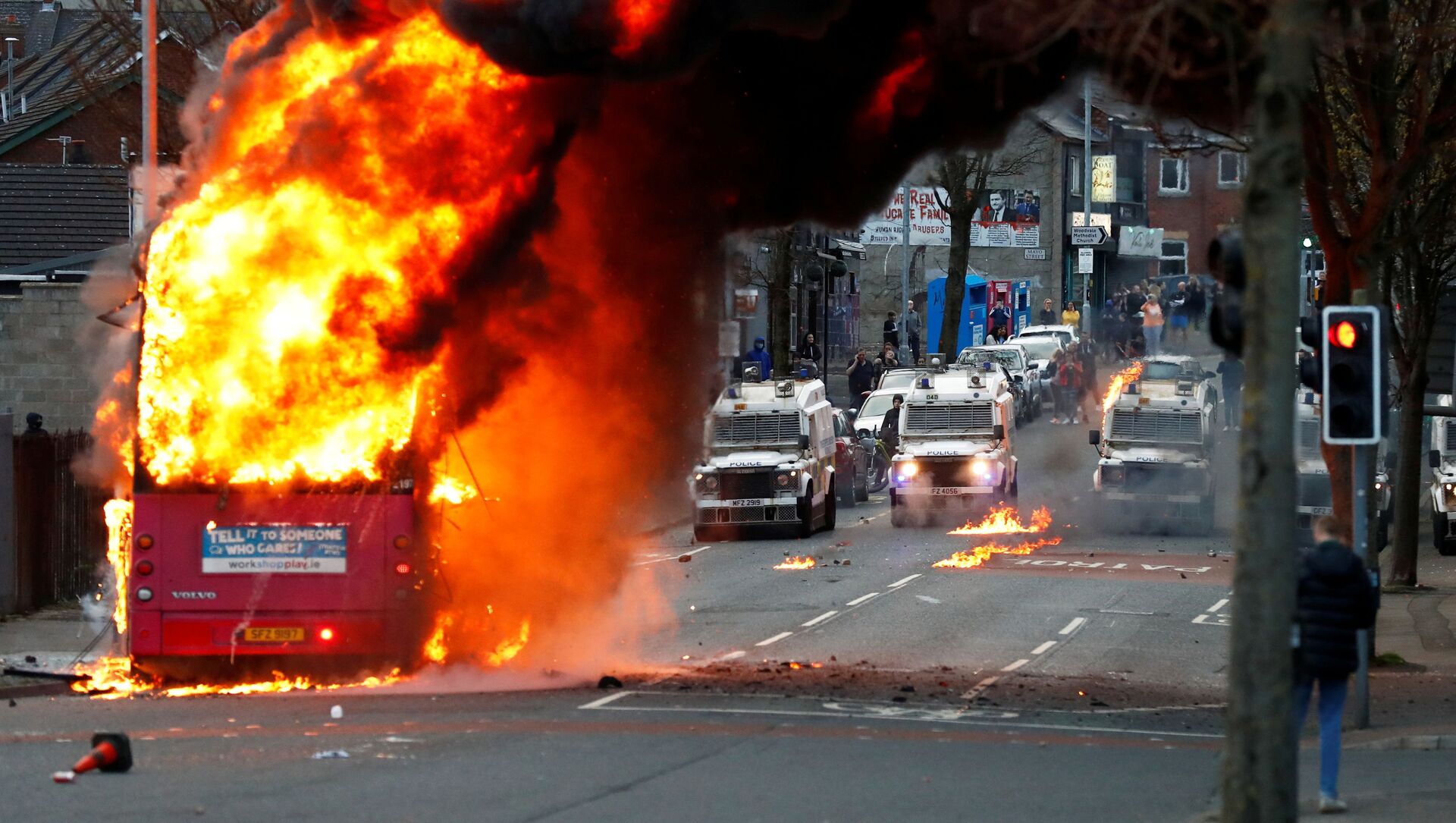 Alexandra Kashirina
All materialsWrite to the author
Northern Ireland and the Republic of Ireland faced a new series of post-Brexit border regulation problems as two countries on one island, united in a single market in the past, now divided by trade restrictions. The controversy stirred the old conflict in Northern Ireland, between separatists and loyalists.

For the sixth consecutive day Northern Ireland has seen violent clashes that were marked on Wednesday by protesters hijacking and setting a bus on fire, reportedly injuring the driver and a journalist.

The double-decker vehicle was stolen in Belfast by protesters who later threw several incendiary bottles at it, setting the bus alight at the junction of Lanark Way and the Shankill Road, with the driver being reportedly assaulted.

A photojournalist, who covered the riots, was also attacked by protesters, according to the Irish Mirror.

A petrol bomb thrown into a bus at a bus driver in Belfast tonight.

A journalist beaten up and called a “Fenian c**t” only a few hours ago.

This needs to stop. Someone is going to lose their life. And who’ll be there to pick up the pieces because it won’t be @BorisJohnson! pic.twitter.com/zExXJtLRWE

Besides, rioters burned gates between the loyalist Shankill Road and nationalist Lanark Way in North Belfast after protesters burned tyres and bins near the gates.

Gates set alight at the peace line between between the Shankill Road and Lanark way interface in North Belfast. Crowds of a few hundred on each side throwing petrol bombs over in both directions. pic.twitter.com/LYnRmAETTY

Street clashes with police occurred in some parts of Northern Ireland, as protesters threw stones at officers. As SkyNews reported, more than 40 police officers were injured and nine people were detained since the outbreak of the new unrest.

I am deeply concerned by the scenes of violence in Northern Ireland, especially attacks on PSNI who are protecting the public and businesses, attacks on a bus driver and the assault of a journalist. The way to resolve differences is through dialogue, not violence or criminality.

The unrest started last week after the Northern Ireland prosecutor's office refused to charge members of the Sinn Fein National Republican Party, who under coronavirus restrictions attended the funeral of former member of Provisional Irish Republican Army (IRA) Bobby Storey, who fought for separation from the United Kingdom.

The unrest turned into violent protests as loyalists, who advocate closer ties with London, are dismayed by the terms of the Northern Ireland protocol, a section of the Brexit deal between London and Brussels.

The protocol includes control procedures for certain goods transited to Northern Ireland from other parts of the United Kingdom, which, according to loyalists, blurs the border between Northern Ireland and the Republic of Ireland, as the latter remains a part of the EU.

The protocol was created to avoid violations of 1998 Good Friday Agreement, that regulates ties between the Republic of Ireland and Northern Ireland, that are located on one Island, although the latter is part of the UK.

Loyalists claim that the agreement could inspire a separatist movement in Northern Ireland.