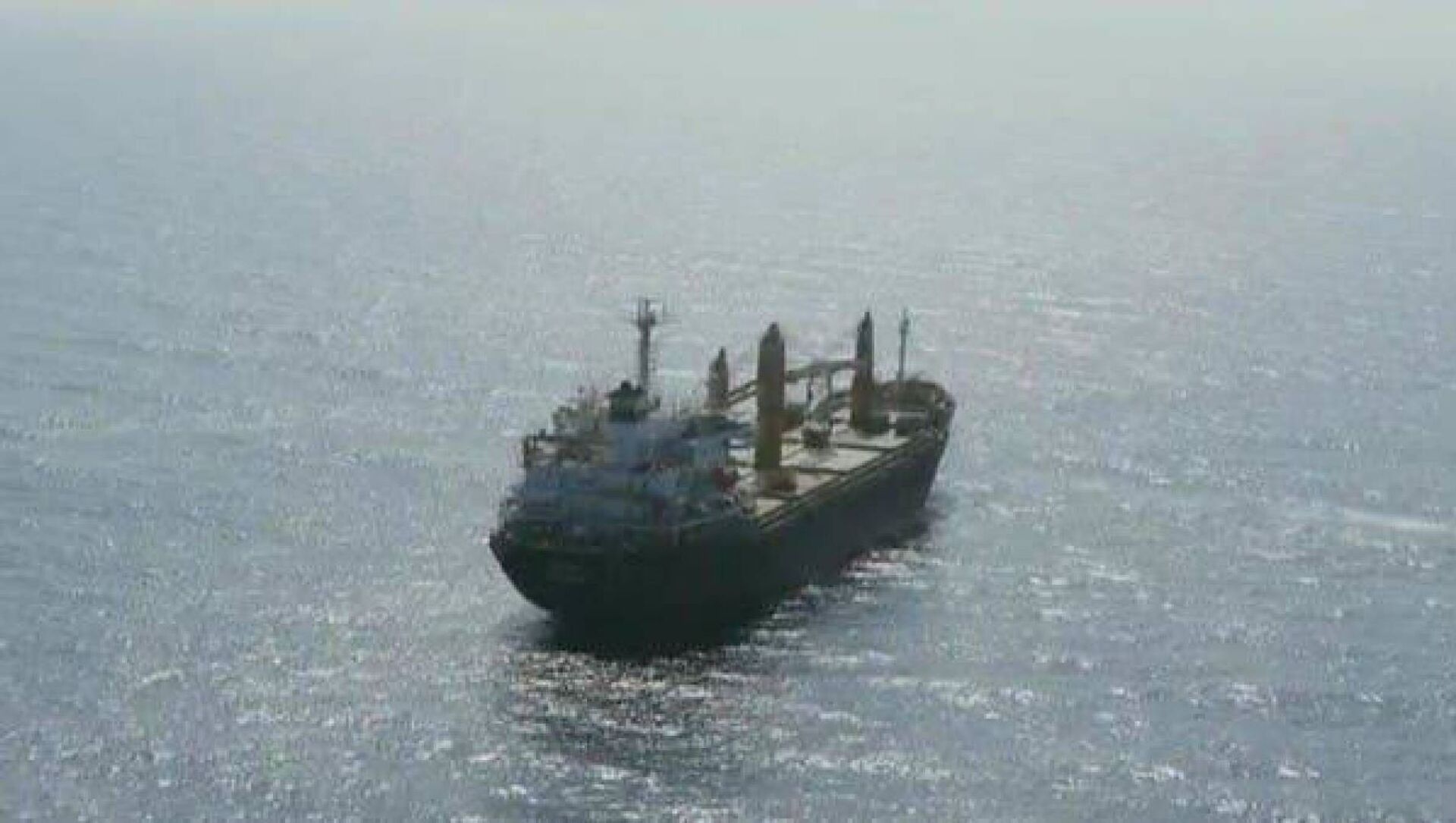 © Photo : YouTube/Al Arabiya English
Subscribe
International
India
Africa
Svetlana Ekimenko
All materialsWrite to the author
Earlier reports stated that an Iranian cargo ship, the Saviz, had been attacked in the Red Sea by a missile or a mine, with Israel allegedly notifying the United States that its forces had carried out the strike as "retaliation for earlier Iranian strikes on Israeli vessels", according to The New York Times.

The Iranian Foreign Ministry has confirmed that an Iranian vessel, the MV Saviz, has been targeted in the Red Sea.

"The explosion occurred on Tuesday morning near the Djibouti coast and caused minor damage with no casualties. The vessel was a civilian ship stationed there to secure the region against pirates," Foreign Ministry spokesman Saeed Khatibzadeh said on Wednesday, adding that the issue was “under investigation".

This comes after Iranian state television reported on Wednesday, citing foreign media, that an Iranian general cargo ship - the Saviz - had possibly been struck by a missile.

A defence correspondent for Iran's Tasnim news agency reported, citing sources, that the hull of the freighter, which US, Israeli, and Saudi officials, as well as the media, have previously claimed may be a covert Revolutionary Guard forward base or intelligence-gathering vessel, was damaged as a result of the explosion of limpet mines.

The naval war between Israel and Iran continues

An Iranian ship was attacked in the Red Sea
A missile hit the ship "Sabiz" belonging to the Iranian "Revolutionary Guards". The incident joins a series of incidents of damage to Iranian and Israeli ships in recent months. https://t.co/sub6cgitRZ

​Anonymous US sources were cited by The New York Times as claiming Israel notified the United States that its forces had attacked an Iranian vessel, the Saviz, in the Red Sea.

The strike had purportedly come in "retaliation for earlier Iranian strikes on Israeli vessels", with the Saviz “damaged below the water line”, according to NYT.

The US military's Central Command also issued a statement, saying it was “aware of media reporting of an incident involving the Saviz in the Red Sea”.

“We can confirm that no US forces were involved in the incident. We have no additional information to provide,'' reads the statement, reported by AP.

Anonymous US officials speaking to Reuters denied any role in the incident.

Tel Aviv has been blamed for the explosion in a spate of Telegram social media channels run by members of the Islamic Revolutionary Guard Corps, while there has been no official comment from Tel Aviv.

Ship-tracking data shows that the vessel, owned by the state-linked Islamic Republic of Iran Shipping Lines, entered the Red Sea in late 2016.

Since then it has drifted off the Dahlak archipelago, and was suggested as receiving supply replenishments and switching crew via passing Iranian vessels.

ImageSat, an intelligence firm, was cited by The Times of Israel as saying the vessel has hardly moved in the past two years. 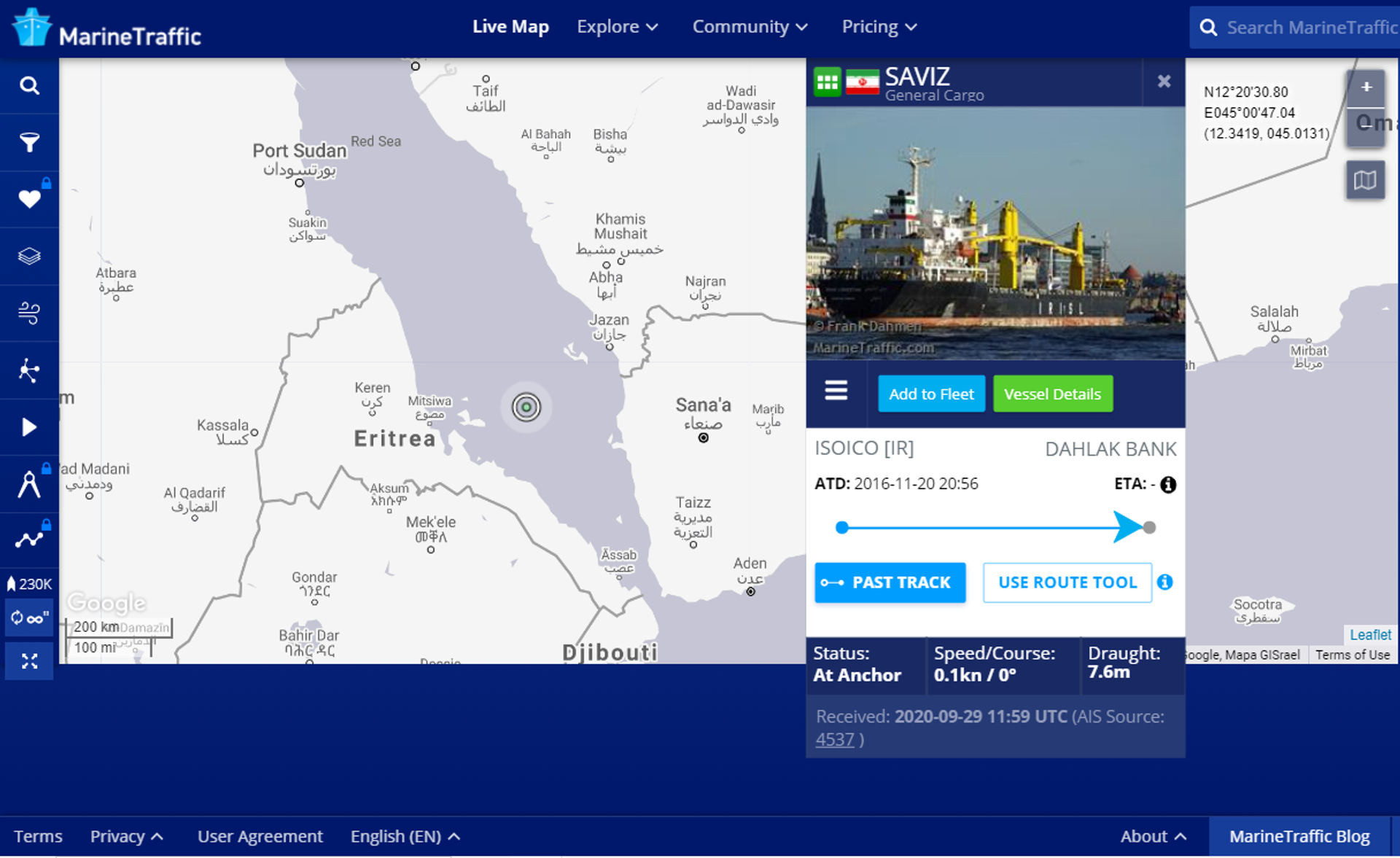 The Saviz was referred to as an “Iranian mothership'' in the region by The Washington Institute for Near-East Policy, which insisted it served as an intelligence-gathering base and armoury for the Revolutionary Guard, without substantiating their claims.

Men dressed in camouflage and military-style fatigues were reportedly seen on the vessel, according to Saudi military briefing materials cited by The Associated Press.

Images were cited that ostensibly showed electronic surveillance-type antennas on the vessel that the Saudi military analysts considered ‘unusual’ for a cargo ship.

Small boats were claimed to have been spotted near the freighter, capable of ferrying cargo to the Yemeni coast.

Ahead of the Iran nuclear deal of 2015, the cargo vessel MV Saviz had been under international sanctions. The Joint Comprehensive Plan of Action (JCPOA) signed by Iran and the P5+1 (China France, Germany, Russia, the United Kingdom, and the United States) on 14 July 2015 required Tehran to scale back its nuclear programme and severely downgrade its uranium reserves in exchange for sanctions relief, including lifting the arms embargo five years after the deal's adoption.

However, then-president Donald Trump withdrew the US from the deal and resumed a policy of slapping sanctions on Tehran.

As part of its decision to unilaterally scrap the JCPOA, the Trump administration later renewed American sanctions on the Saviz

The incident with the Saviz comes amid spiralling maritime tensions between Iran and Israel. The two countries have been accusing each other of attacking one another’s vessels.

In late March, Israeli media reported that an Israeli ship was hit by Iranian missile in Arabian Sea. An earlier incident in February, which involved Israeli-owned MV Helios Ray. A blast had struck the Bahamian-flagged cargo ship in the Gulf of Oman, prompting Prime Minister Benjamin Netanyahu to accuse Iran of orchestrating the attack.

Iran swiftly denied the charge, slamming it as a "false flag operation."

Meanwhile, Iran has blamed Israel for a spate of attacks, including an explosion last summer that destroyed a centrifuge assembly plant at its Natanz nuclear facility.

The assassination of Mohsen Fakhrizadeh, a top Iranian scientist who founded the Islamic Republic’s military nuclear program two decades ago, was also attributed to Israel by Tehran.

Current developments come against the backdrop of ongoing negotiations in Vienna to save the Joint Comprehensive Plan of Action (JCPOA) – a deal that Israel opposes.

"There must be no return to the previous nuclear agreement. We must stick to an uncompromising policy to ensure that Iran does not develop nuclear weapons," the Israeli Prime Minister Benjamin Netanyahu said in a speech last year.

Iran’s foreign ministry spokesman has told Press TV that Tehran will not accept any step-by-step plan to revive the 2015 nuclear deal. Saeed Khatibzadeh says the U.S. must remove all sanctions if it wants to salvage the accord. pic.twitter.com/lkdWRh9w5v

​Iran expects to use the Vienna discussions to reiterate Tehran's conditions for a return to full compliance with the nuclear pact – namely the lifting of US sanctions.