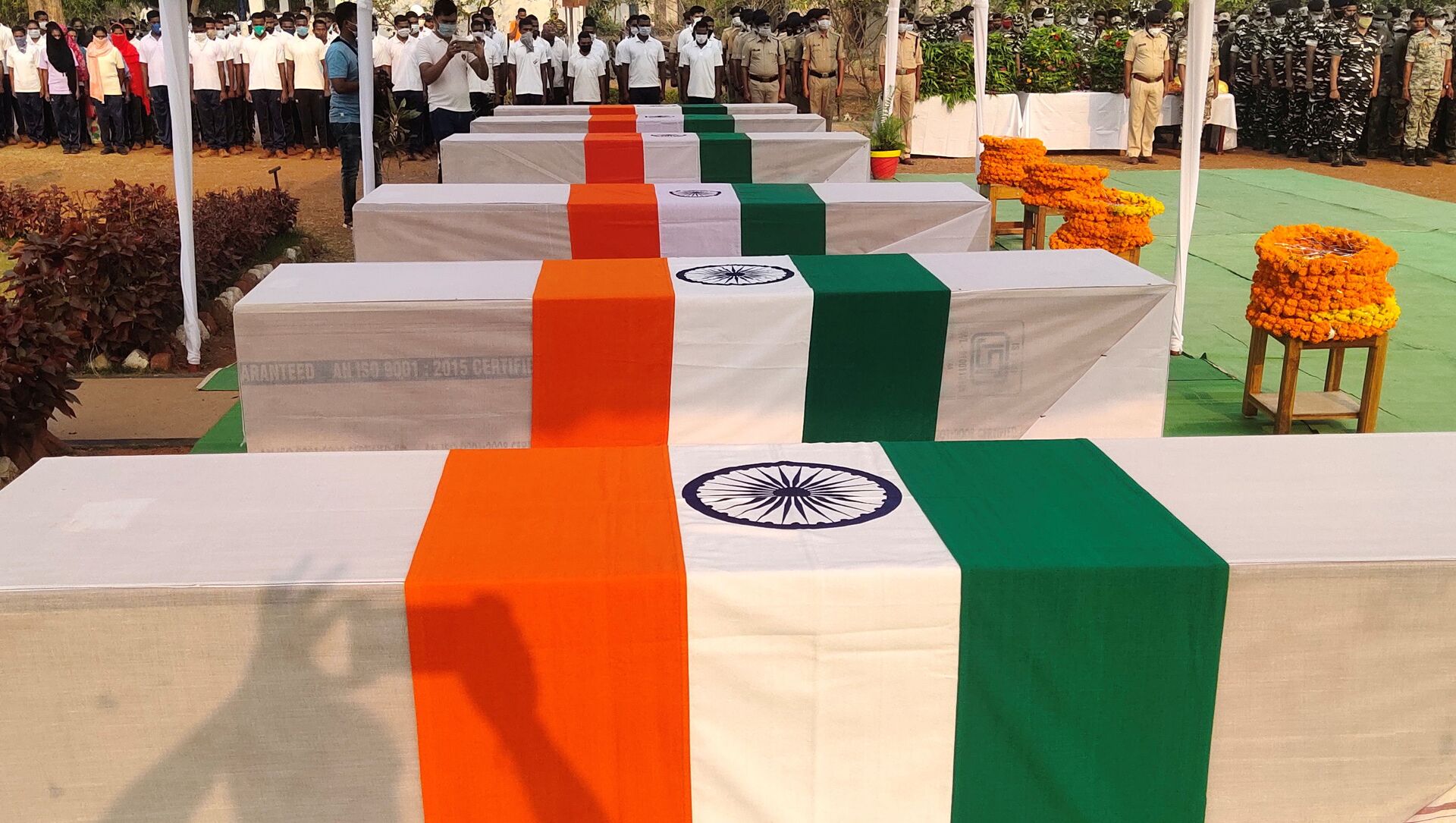 Priya Yadav
All materials
At least 22 security personnel were killed and 33 injured on Saturday in one of the deadliest Maoist ambushes in India's Chhattisgarh state. Maoists set off bombs and rained bullets and shells on the troops from well camouflaged positions. The incident has triggered public outrage in the country.

India's main opposition party Congress on Monday questioned federal Home Affairs Minister Amit Shah for remaining in office after 22 soldiers were killed in one of the worst attacks in recent times.

"Any other Home Minister would have had to resign had 22 jawans being killed under his watch during a federal forces led anti-Naxal operation, as happened in Chhattisgarh where Maoists trapped the security personnel, killing them," Congress Spokesperson Randeep Surjewala said on Monday.

"Amit Shah continued with his political canvassing in poll-bound state of Assam even after the attack," he added.

Citing past instances, Surjewala said that "one Home Minister had to resign just because he changed clothes during the Mumbai terror attacks. Changing clothes is not a big deal," said Surjewala about his own party leader and then Home Affairs Minister Shivraj Patil.

Maoists' Corpses Taken Into Forest as India's Home Minister Set to Visit Army-Naxal Clash Site
He was referring to the resignation of Shivraj Patil, India's home affairs minister in the United Progressive Alliance in 2008, who stepped down after a terror attack in Mumbai that left 183 people dead, including 22 foreigners.

Controversy broke out over his delayed response to the tragedy, which was attributed to time taken in changing attire. Following severe criticism, Patil took moral responsibility and resigned from his position.

"But here you have a home minister who carried on with poll campaigns for 24 hours after the soldiers were killed and cancelled only last two rallies in Assam," said Surjewala. "Should questions not be asked of such a home minister? Is saying that their sacrifices won't go in vain enough?"

A day after the attack, Shah said those responsible for the Naxal attack in Chhatisgarh would be brought to justice at an appropriate time, while search operations are continuing following the encounter.

The Congress leader pointed out that anti-Naxal operations are the sole responsibility of the home minister, and the Bijapur Operation was a central forces operation in which state forces were aiding.

Saying that no one would ask for Shah's resignation, Surjewala also slammed the delay in rescuing the injured. "Maybe lives could have been saved with swift response," he said.

Politicians Condemn Naxal Massacre in Chattisgarh Which Leaves 22 Indian Soldiers Dead
Meanwhile, the Central Reserve Police Force has ordered an inquiry into the intelligence that led the soldiers into a trap laid by the Maoists, Indian news agency Press Trust of India reported.

The gunfight between the Maoists and the troops went on for several hours and a rescue party of 500 policemen only reached the site 24 hours later. The Maoists reportedly looted weapons and even shoes from the soldiers who were killed.

Senior Congress leader and Parliamentarian Rahul Gandhi has also slammed the government over its handling of the attack.