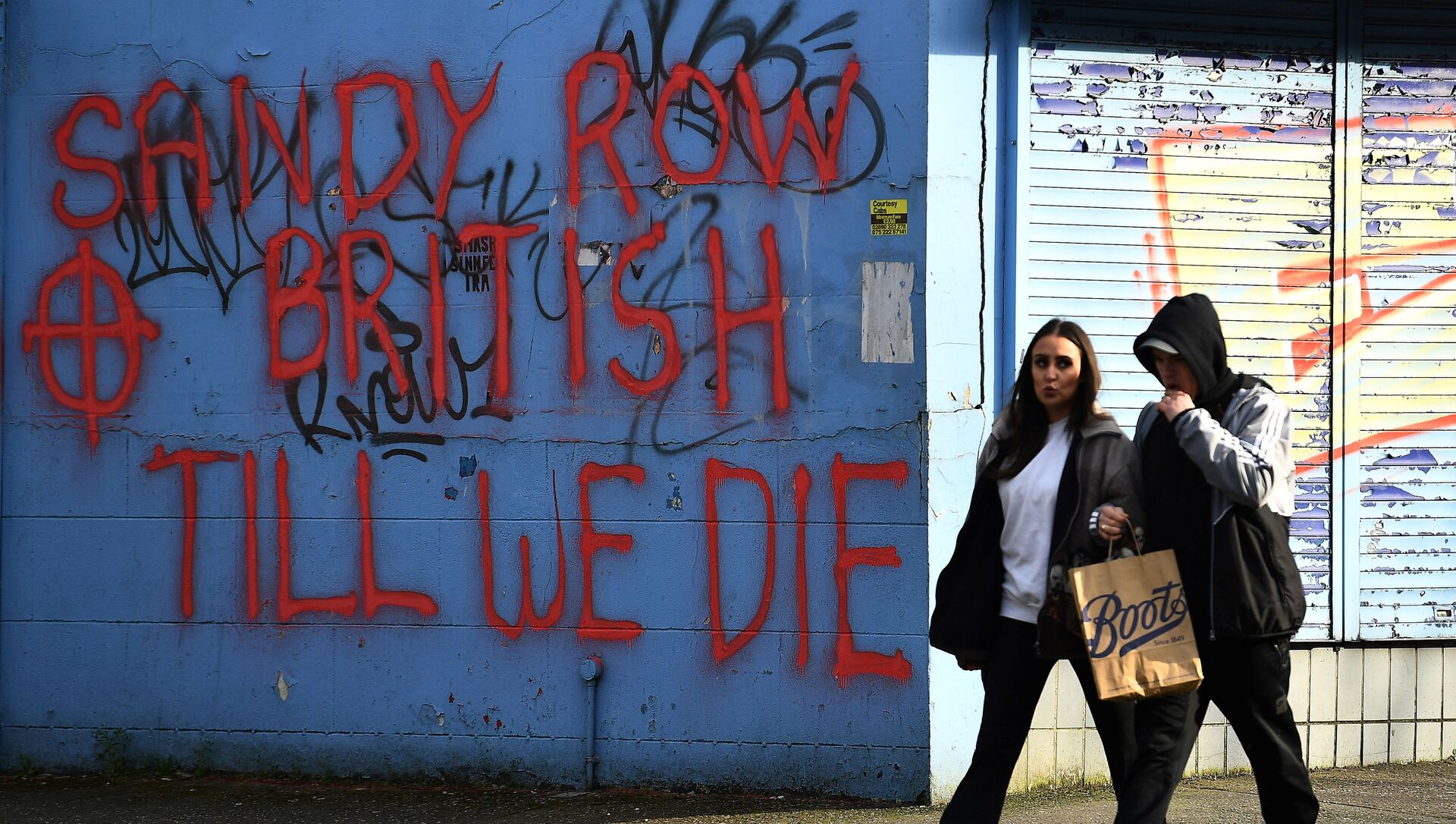 © REUTERS / CLODAGH KILCOYNE
Subscribe
International
India
Africa
Lilia Dergacheva
All materialsWrite to the author
Local unionists and loyalists have in recent weeks expressed staunch opposition to the Northern Ireland Protocol, a part of the newly concluded Brexit trade deal, which envisages checks in the Irish Sea for goods crossing from and into the rest of the UK.

Fifteen police officers have been injured after being attacked by rioters hurtling stones, fireworks, and bottles in a "loyalist" area of Belfast, police said.

The behaviour, slammed by the city's District Commander Chief Superintendent Simon Walls as "appalling", ensued after four nights of disturbances in the Waterside area of Londonderry. Last night's standoff originally started in the Shaftesbury Square area, but then spilled over into neighbouring Sandy Row.

"Their injuries include burns, head and leg injuries. Seven people have been arrested at the scene", Walls tweeted on the Police Service of Northern Ireland's social media account, going on to call for calm and public order.

"I am appealing to all those involved to stop this appalling behaviour immediately. Police are trying to protect those living in the Shaftesbury Square, Donegall Road, and Sandy Row areas and it is completely unacceptable that my officers are coming under sustained attack", he said of the disorder that has been thriving amid ongoing tensions within loyalist circles across Northern Ireland.

Ulster loyalists and unionists at large have been raging about post-Brexit trade arrangements, which they fume have ostensibly separated Northern Ireland from the rest of the UK.

Tensions were further exacerbated this week following a contentious decision not to prosecute 24 Sinn Fein politicians for attending a large-scale republican funeral during COVID-19 restrictions.

After law enforcement decided not to take action against the politicians, including deputy First Minister Michelle O'Neill, major unionist parties demanded the resignation of Northern Ireland's police chief, constable Simon Byrne, claiming he no longer enjoys the trust of their community.

The disturbances have hit a raw nerve with forces from all over the political spectrum - unionists and non-unionists alike, with the parties blaming the tensions on each other.

According to Alliance Justice Minister Naomi Long, "this is in no-one's best interests" - neither the officers', as they have to restore order, nor in the interests of young people risking their futures by engaging in confrontations with police.

SDLP South Belfast MP Claire Hanna tweeted: "Sad to see disorder in Sandy Row. Usual suspects with no vision whip up tension for electoral gain, which they never use to improve life for those they pretend to represent".

Sinn Fein MP Paul Maskey, for his part, blamed "the DUP and political unionism" for what he called "dangerous rhetoric".

DUP MLA for the area Christopher Stalford has since addressed the politicians' violation of the COVID restrictions and what he believes it has led to:

"Given the actions of the Deputy First Minister some folks may believe that they can break the rules. That is not the case - two wrongs don't make a right", he charged. Stalford, whose constituency office is in the Londonderry area, said he didn't want to see young people "ending up with criminal records".

It is now three months since the UK completely separated from the EU, with the greatest source of discord in that time being the creation of what has turned out to be a new border within the UK - the Irish Sea border.

It is part of the Northern Ireland Protocol that came with the Brexit trade deal and introduced checks on goods crossing the Irish Sea as a compromise in order to avoid checks along the land border with the Republic of Ireland.

Yet, these checks have since raised quite a few questions, with the protocol being strongly opposed by Northern Ireland's unionist political forces, who see it as undermining the country's place and role in the broader UK.