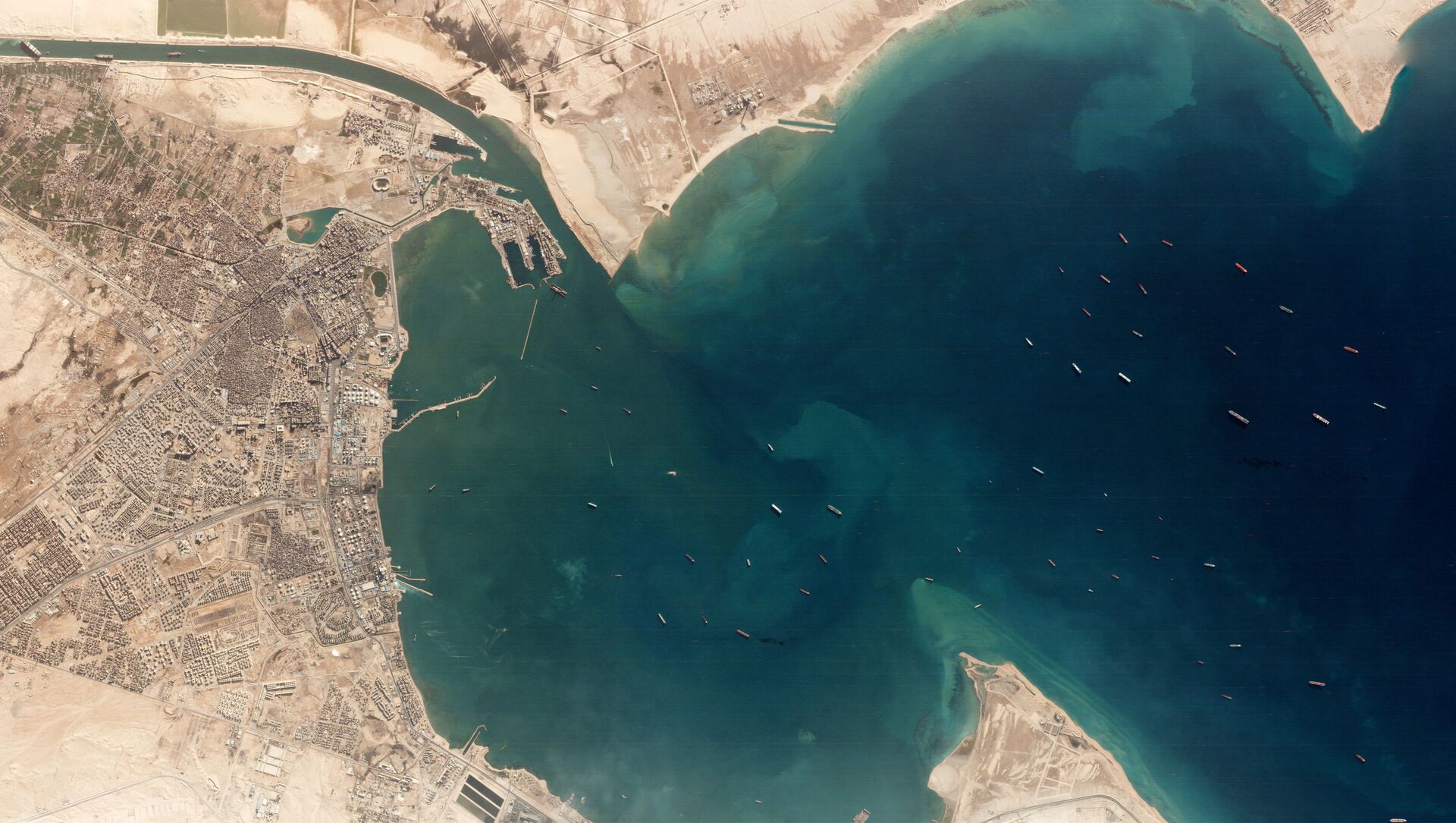 © REUTERS / Planet Labs Inc/Handout
Subscribe
International
India
Africa
Gaby Arancibia
All materialsWrite to the author
Egypt's Suez Canal was unexpectedly blocked early last week after the Panamanian-flagged cargo ship Ever Given ran aground after strong high winds and a sandstorm dramatically reduced visibility for the crew. Repeated attempts to release the 200,000-tonne ship were previously unsuccessful.

Osama Rabie, the head of the Suez Canal Authority, noted that the agency will be working "around the clock" to ensure the end of the traffic jam at the passage, noting that approximately 113 vessels are expected to cross the channel between 6 p.m. on Monday and 8 a.m. on Tuesday.

Rabie went on to state that officials will be using the incident as a learning step to prevent similar issues from arising. Additionally, in the wake of the trading setback, officials are weighing the possibility of providing benefits to clients.

However, as traffic resumes in the busy trade waterway, officials are anticipating that seaports across Western Europe may face a sharp spike.

Representatives for Belgium's Antwerp, the second-busiest European port, informed Sputnik News that it is making preparations in case of peak traffic caused by the unblocking of the Suez Canal. First ships are expected to begin arriving this week or by early next week.

The efforts to refloat the container ship Ever Given that ran aground in the Suez Canal, Egypt, are seen in this screengrab taken March 29, 2021 from live tracking stream
© REUTERS / FLEETMON

"There will be an impact on our port, but it is still too early to judge how small or large this impact will be," the spokesperson remarked. "Some shipping companies can decide to change their schedule or decide whether or not to call extra at certain ports."

Rabie has indicated that should the transit pace at the Suez Canal remain, the current backlog could be cleared in about 3.5 days.

The mammoth Ever Given cargo ship was finally freed earlier Monday after a massive effort from various tugboats and dredging operations. It proved to be the first global operation in which a ship was successfully refloated without having to unload its container ships, an option that officials had been considering.

The vessel, which briefly blocked the Suez for a second time after being freed, is currently located at the Small Bitter Lake, a saltwater body of water in Egypt that is connected to both the Mediterranean Sea and the Red Sea.

The cost of the traffic accident remains unclear as insurers, the shipping industry and a slew of businesses depending on container goods are still calculating figures. It was previously reported that the Shoei Kisen Kaisha, the owner of the Ever Given, holds an insurance policy of $3 billion.