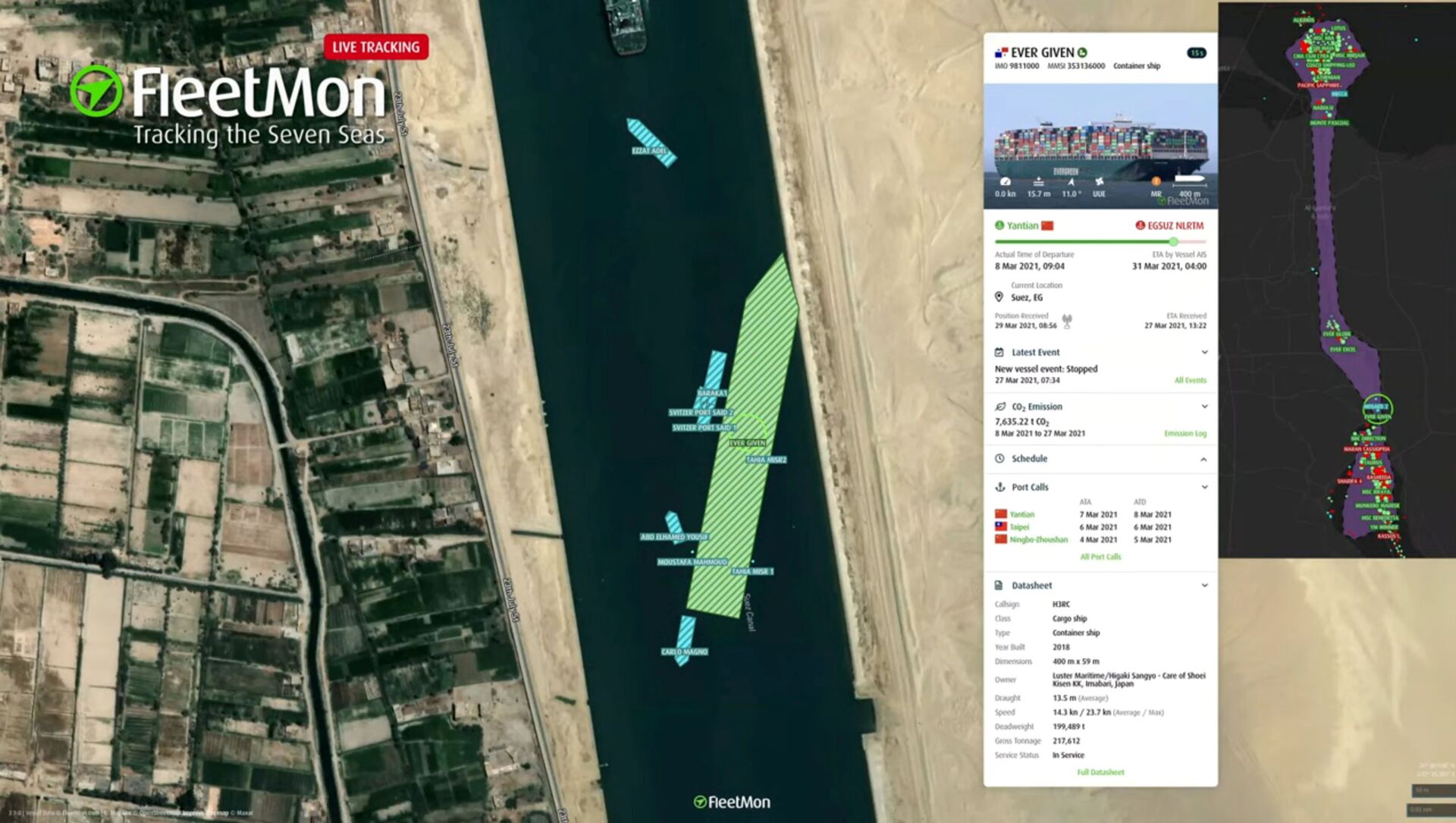 Ilya Tsukanov
All materialsWrite to the author
Earlier, Egyptian President Abdel Fattah al-Sisi announced the mission to unblock the Suez Canal was complete, with maritime services provider Inchcape Shipping reporting that the 400 metre-long container ship Ever Given had been freed. It had been stuck in the canal since Tuesday, holding up $400 million per hour in global trade.

The Ever Given container ship briefly blocked the Suez Canal again on Monday, just hours after being freed, a source in the Canal administration told Sputnik.

"The ship has again returned to the same position it was in due to wind, but the situation isn't as difficult as it was the first time," the source said in the early afternoon GMT time, adding that workers planned to rectify the situation within the hour.

The source later confirmed that the ship had been towed back to a normal position and that "the crisis is over."

"The container ship...was towed back into the fairway...At this moment it is being towed to Bitter Lake," the source said.

MarineTraffic's live traffic feature showed that the container vessel's bow did indeed appear to be tilted into the canal's right bank as of 13:05 GMT.

Screengrab of MarineTraffic map showing the Ever Given trapped in the Suez Canal in the early afternoon on Monday, 29 March, 2021.
© Photo : MarineTraffic/Screengrab

By 13:20 GMT, the ship appeared to have been righted, pointing north and surrounded by tugs. By 13:30, a flotilla of as many as five tugs was towing the ship north on its way out of the canal.

Earlier Monday, canal authorities told reporters that engineers had "partially refloated" the errant skyscraper-sized container ship. A source in the Gulf Agency Company told Sputnik that the ship was refloated on Sunday and that "today the operation continues to get the ship on track."

World
Video: Giant Cargo Ship Ever Given Refloated in Suez Canal
A technical inspection of Ever Given was carried out at Great Bitter Lake later in the day, with the ship sent on its way to Rotterdam - the original destination it had set before the jam-up.

The Ever Given saga has garnered the attention of observers from around the world after running aground in the Suez Canal last Tuesday, completely blocking navigation and causing delays to the shipment of tens of billions of dollars in world trade. The massive ship, owned by Japanese shipbuilding giant Imabari Shipbuilding, is registered in Panama, managed by German ship management company Bernhard Schulte, and chartered by Taiwanese container transportation firm Evergreen Maritime.

The accident involving the Ever Given is estimated to have held up up to $400 million in global shipping for every hour that the cargo ship was trapped in the Suez Canal – with the strategic waterway accounting for about 12 percent of all global shipping. In addition, Egypt, which charges transit fees for commercial vessels travelling through the canal, reportedly lost some $14 million in revenues for every day that the ship remained trapped.

The incident garnered an air of mystery after the ill-fated ship "accidentally" chartered a course resembling male genitalia before getting stuck in the canal, giving rise to a host of conspiracy theories.

The accident also shed light on the dangers associated with global dependence on a single waterway for so much trade, with the Russian Energy Ministry pointing to Russia's Northern Sea Route as a prospective alternative to the Suez, while Iran's Ambassador to Russia said the India-Iran-Russia North-South Transport Corridor is another time-saving and cost-effective alternative to the popular route.