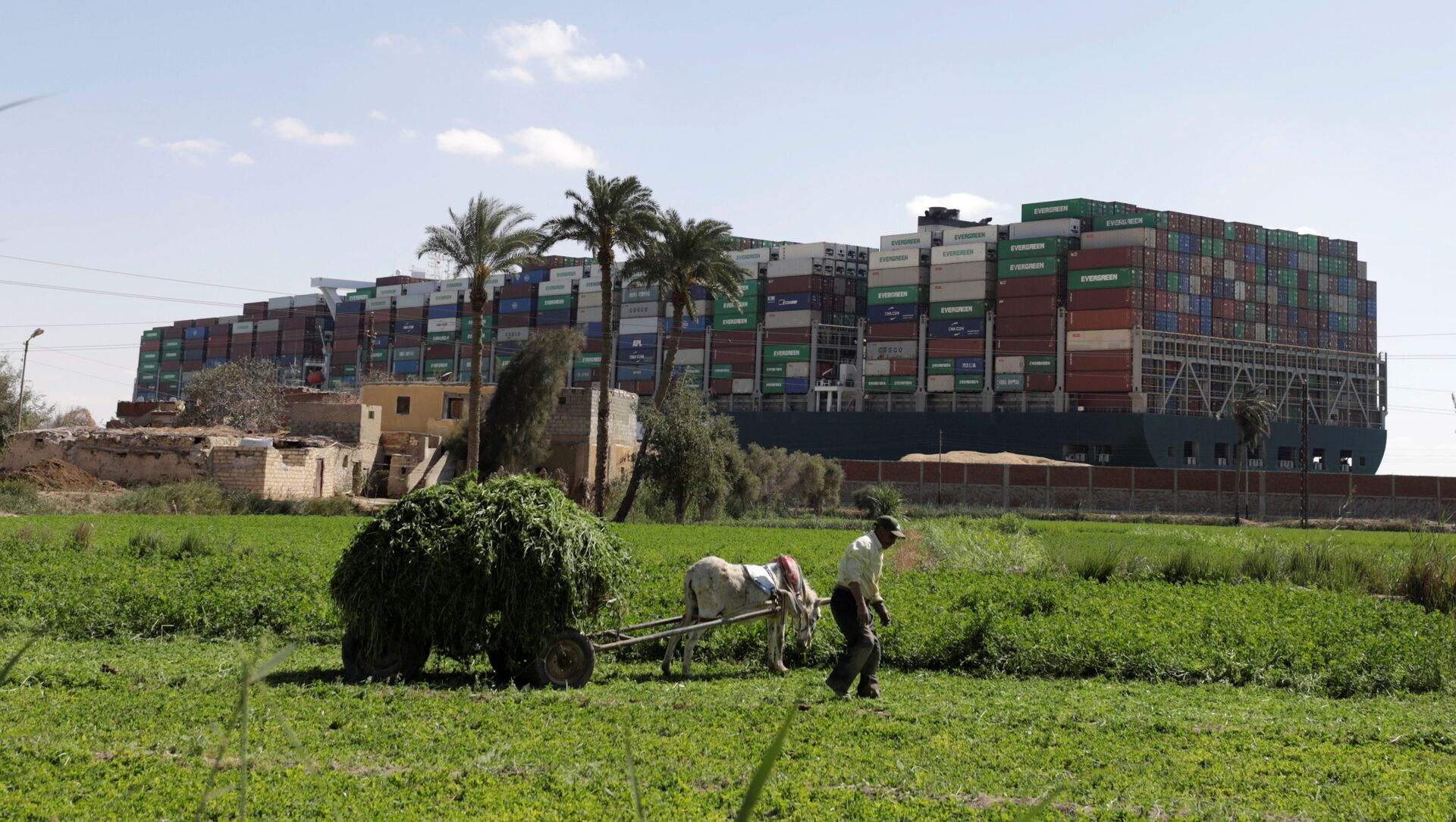 Ilya Tsukanov
All materialsWrite to the author
The 400-metre long container ship, which made headlines around the world last week after jamming up the Suez Canal, is owned by Japanese shipbuilding giant Imabari Shipbuilding, registered in Panama, managed by German ship management company Bernhard Schulte, and chartered by Taiwanese container transport company Evergreen Maritime.

Egypt will be asking the owners of the Ever Given cargo ship to pay Cairo compensation, and holds the ship's captain responsible for last Tuesday's accident which shut down the Suez Canal, an aide to Egyptian President Abdel Fattah al-Sisi has told Sputnik.

The advisor, who asked not to be named, said it will take up to four days to completely clear up the bottleneck which has formed in the canal.

The official also confirmed that navigation has been resumed, that the canal was completely safe, and that reconstruction of any kind was not deemed necessary following the 23 March incident.

The advisor also ruled out the possibility of sabotage.

Finally, the official indicated that the Ever Given was undergoing technical inspection, after which it would be sent on its way to its destination in Rotterdam, the Netherlands.

Late last week, The Japan Times reported that the Ever Given was traveling at a rate of 13.5 knots before running aground, despite the canal's speed limit of between 7.6 and 8.6 knots.

The massive, skyscraper-sized container ship's bow jabbed into the canal's right bank last Tuesday, with its stern pointing toward the left bank at an angle sufficient to block all traffic by all large ships. Strong winds are believed to have played a role in the accident. 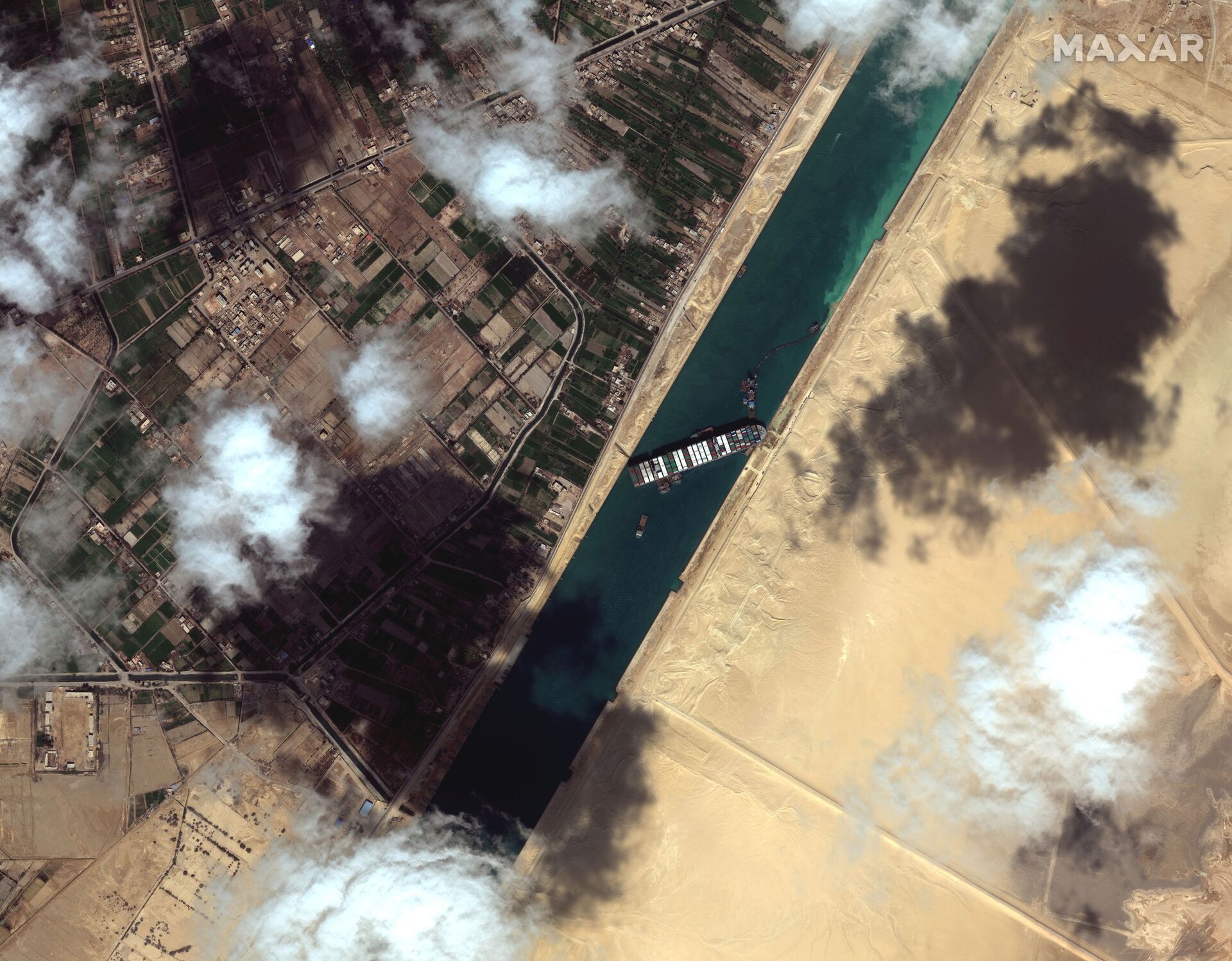 A general view of the Ever Given container ship in Suez Canal, in Suez Canal in this Maxar Technologies satellite image taken on March 27, 2021.
© REUTERS / MAXAR TECHNOLOGIES

The incident caused a massive pile-up of shipping vessels to the canal's north and south, with financial beancounters estimating that the ship was delaying some $400 million in shipping for every hour that it remained jammed up in the canal, and causing Egypt some $14 million in lost revenues daily from transit fees.

Waiting For Ever (Given): Which Ships Have Been Held Up By The Suez Canal Blockage And Delays?
According to the Suez Canal's official website, some 372 vessels have been waiting to pass through the waterway, including 180 bulk carriers, 24 crude oil tankers, 98 container ships, and 29 ships carrying either liquefied natural gas (LNG) or liquefied petroleum gas (LPG). An additional 11 ships transporting Japanese and Korean vehicles to Europe from the Far East, or German, French and Italian cars to Asia, have also been held up.

The 23 March accident prompted some shipping companies to reroute vessels around the Cape of Good Hope. A handful of Asian retailers reportedly decided to turn to overland transport via Russia and Central Asia.