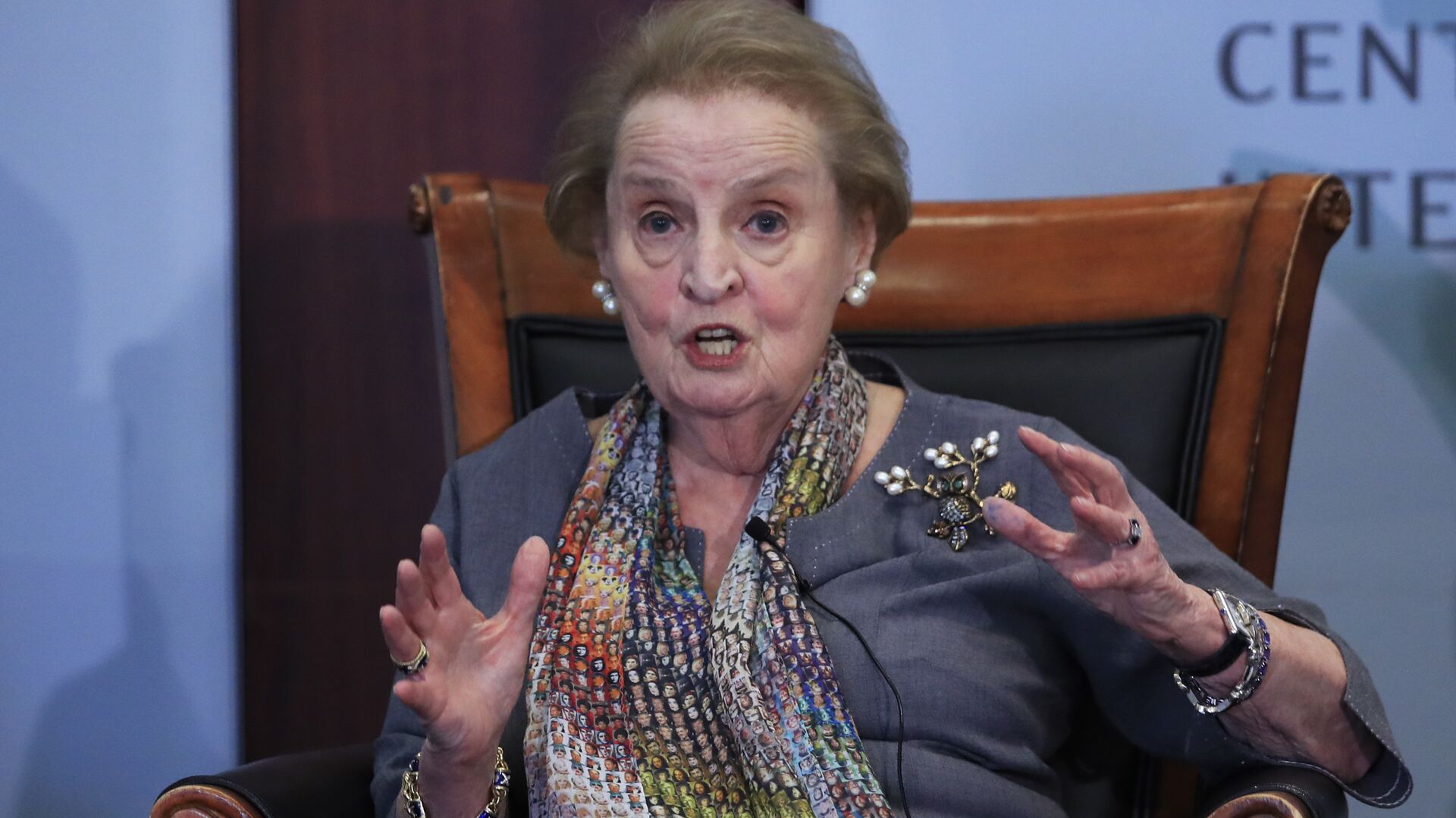 Aleksandra Serebriakova
Sputnik correspondent specializing in foreign affairs.
All materialsWrite to the author
Madeleine Albright, former US secretary of state and ambassador to the United Nations, went down in history as a stringent defender of sanctions against Iraq. Albright again incited controversy in 2016, when she said that there is a “special place in hell for women who don’t help each other”, while calling on women to vote for Hillary Clinton.

US Secretary of State Antony Blinken drew sharp criticism on Twitter this Saturday after he described Madeleine Albright, his predecessor who served in the Bill Clinton administration, as his “role model” and a “woman of courage” - despite her history of justifying the death of half a million Iraqi children under US sanctions.

“During her diplomatic career as US Ambassador to the UN & the first female Secretary of State, her tenacity & effectiveness left the U.S. stronger & more respected globally,” Blinken wrote, while tagging Albright along with the #WomenOfCourage hashtag in a purported reference to US Secretary of State's annual award for remarkable female activists.

One of my #WomenOfCourage is @Madeleine Albright. During her diplomatic career as U.S. Ambassador to the UN & the first female Secretary of State, her tenacity & effectiveness left the U.S. stronger & more respected globally. She’s a role model for me & so many of our diplomats.

Blinken’s pick  left many social media users appalled. Some of them rushed to recall Albright’s infamous ‘60 Minutes’ interview to Lesley Stahl, which aired on CBS, during which the then-US ambassador to UN defended the agency’s sanctions against Iraq.

When Stahl asked the official during the 1996 broadcast whether the death of half a million Iraqi children was “worth” imposing the sanctions, Albright replied firmly: "We think the price is worth it".

Well, I believe you're serious. A great choice as a role model! 👍👍https://t.co/6DwvFVX96k

The interview subsequently landed Stahl an Emmy award but left Albright with many enemies, who called her a “war criminal” and “mass murderer”.

When your role model is mass murderer!

She said the death of half a million children was "worth it."

I would simply have selected a non-war criminal

So you at least admit that murdering 500.000 Iraqi kids via sanctions and giving the thumbs up to that ("worth it") is role-model behavior. Cool stuff, totally non-psychopathic.

What did she say about the children in Iraq who were dying under US sanctions?

Albright later slammed the segment, saying that she “had fallen into a trap” during the interview and said something she hadn't meant to. But the words had already been said.

The ex-ambassador and former secretary of state has since been embroiled in a number of controversies, including claims that she had initially refused to brand the 1994 mass killings in Rwanda a “genocide”.

There were also accusations from pro-Serbian activists and a police complaint from Czech film director Vaclav Dvorak against Albright for spreading ethnic hatred after the woman was filmed saying “disgusting Serbs” during a 2012 book signing in Prague.

Blinken’s readers concluded that the ex-official, who recently cursed women not willing to support Hillary Clinton as US president to “hell”, was not the most desirable choice for a role model.

That really explains a lot. I don't mean that in a good way.

Do you celebrate super-capable killers?

A role model for genocide against the Serbs?