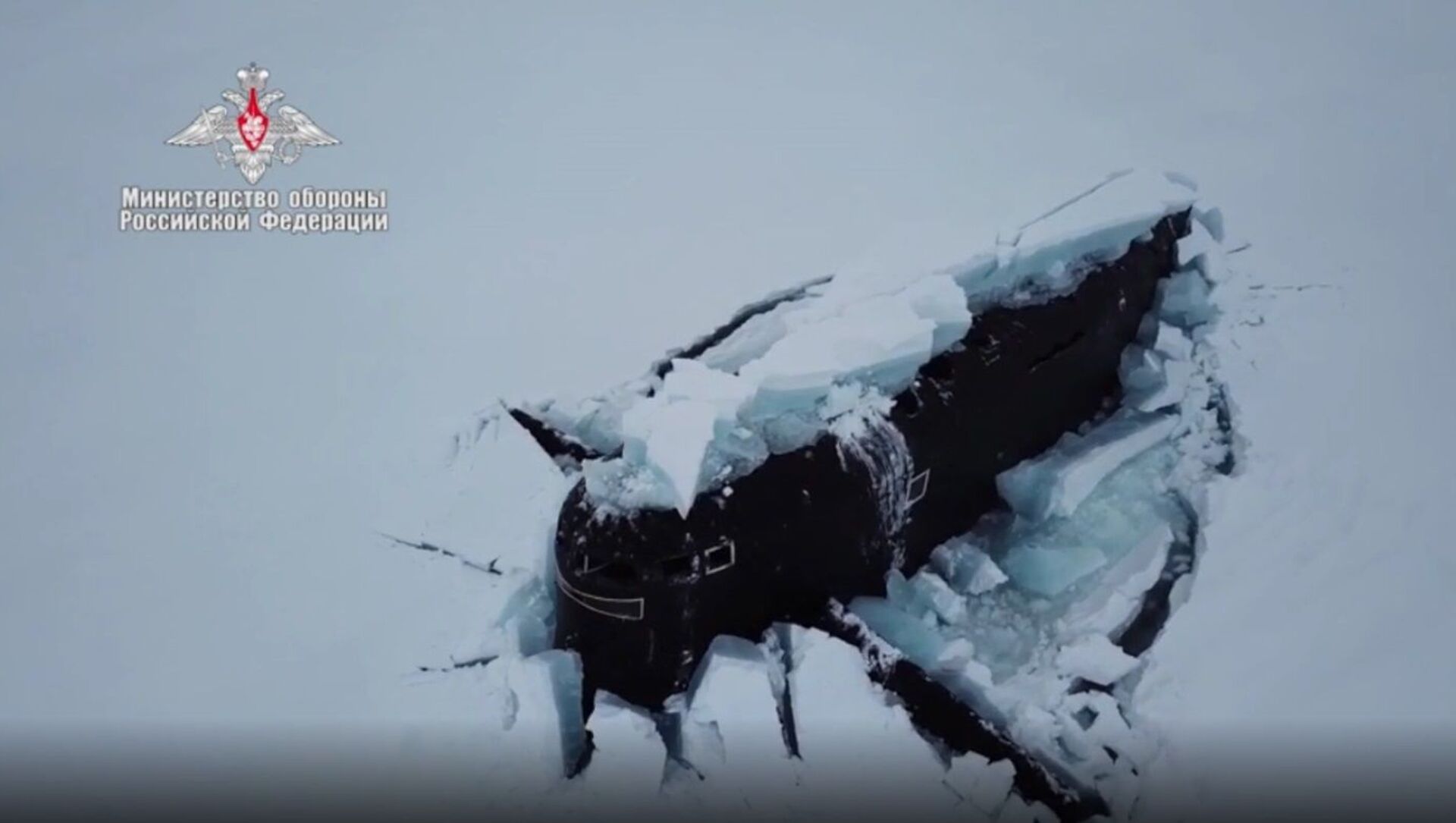 Svetlana Ekimenko
All materialsWrite to the author
Russia recently conducted drills near Franz Josef Land Archipelago in the Arctic Ocean, with three nuclear submarines simultaneously breaking through the 1.5 meter ice "for the first time in the history of the Russian Navy".

Footage from Russia’s recent drills in the Arctic featuring a trio of surfacing Russian nuclear submarines, published earlier by the Russian Ministry of Defense, has mesmerised viewers of the Japanese television channel NHK.

​Within hours after the imagery showing the submarines simultaneously breaking through ice, that was one and a half meters thick, had been posted on the channel's Twitter account, it had generated almost 35 thousand views.

​Earlier, Russian Navy Commander-in-Chief, Adm. Nikolai Evmenov reported to the Supreme Commander of the Russian Armed Forces, President Vladimir Putin, that the submarines surfaced "according to a single concept and plan at the appointed time in an area with a radius of 300 meters".

After one of the subs surfaced, a sailor showed up on top of it and waved at a camera with his hand.

The riveting imagery generated a tremendous buzz on social media, with users gushing over the magnificent ‘show of strength’.

Like out of a futuristic James Bond movie, only Russian!

Surreal footage of three Russian nuclear submarines emerging from under the ice.

​While there has not been any official specification released regarding what submarines were taking part in the Russian drills, some have suggested one of the submarines could be a member of the Borei class, or the lone Borei-A class ballistic missile submarines presently in service, the Knyaz Vladimir.

There's a chance that one of the SSBNs at the latest ICEX was Borei/Borei-A.

​​The other two submarines were suggested by others on Twitter as belonging to Delta IV class submarines.

Two deltas and one Borei by the report

​The recent combat training activity displayed in the imagery is part of the Umka-2021 comprehensive Arctic expedition held near Franz Josef Land Archipelago in the Arctic Ocean.

Carried out with the participation of the Russian Geographical Society, it was aimed at testing Russian military hardware in extreme weather conditions.

"For the first time, a set of combat training, scientific research and practical diverse measures in underway under the single design and plan in subpolar regions,” noted Adm. Nikolai Evmenov.

The expedition involves over 600 servicemen and civil personnel and about 200 items of armament, military and special hardware in an area where the average air temperature is currently 25-30 degrees below Celsius.