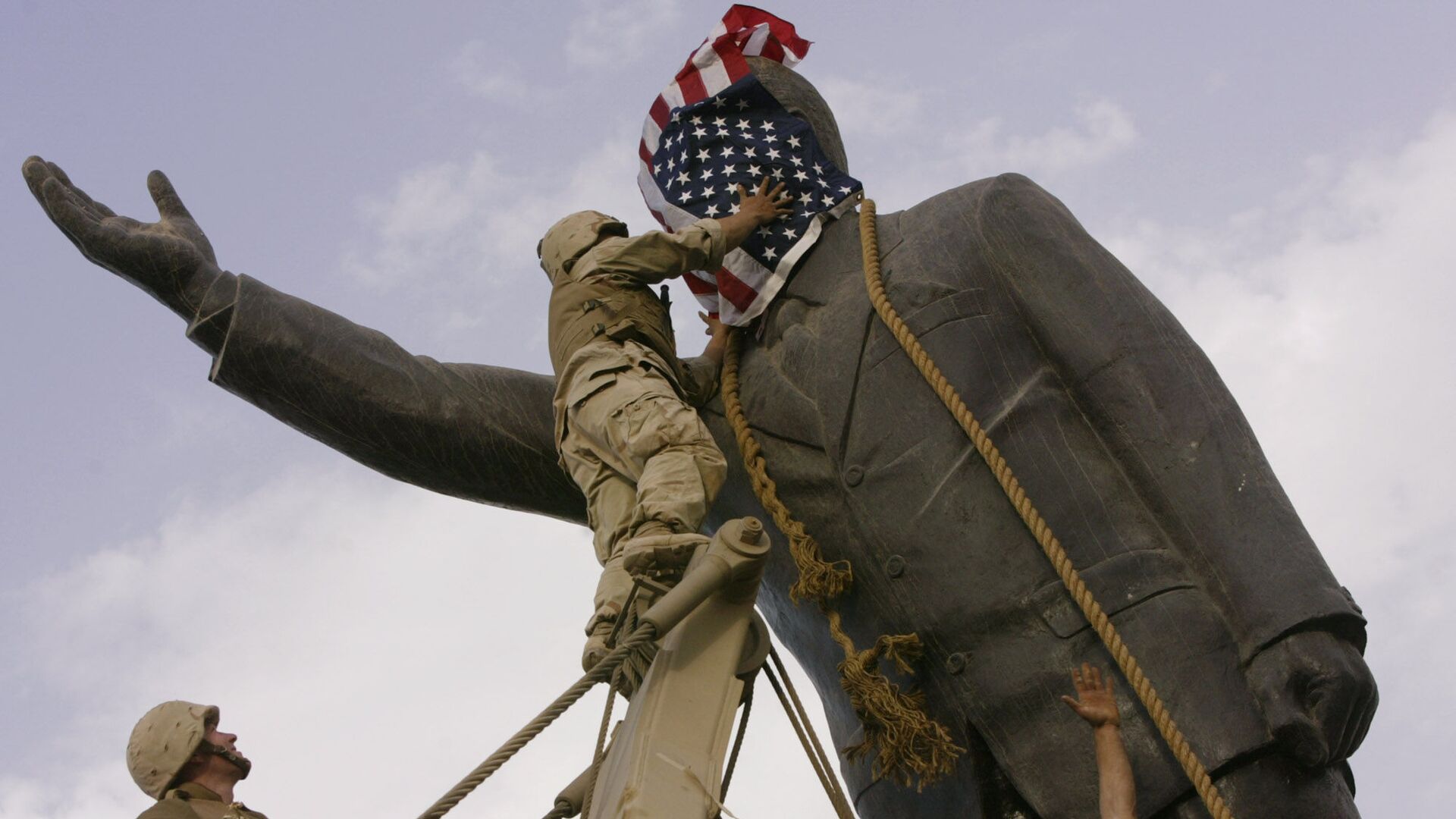 Morgan Artyukhina
All materialsWrite to the author
After the US wrongly accused Iraq in 2003 of hiding weapons of mass destruction it planned to use to attack the US and its allies, it launched an invasion and devastating eight-year-long occupation war that killed an estimated 461,000 Iraqis.

The House Foreign Affairs Committee voted on Thursday to advance a bill that would repeal the 2002 law underpinning the 2003 invasion of Iraq.

The 2002 Authorization for the Use of Military Force Against Iraq (AUMF), passed in October of that year, made the forthcoming US invasion of Iraq in March 2003 legal under US law. It built on the AUMF that was passed in 2001, in the aftermath of the September 11 terrorist attacks by al-Qaeda that killed 3,000 people. The 2002 law further extended the principle of pre-emptive strike that was at the heart of then-US President George W. Bush’s military doctrine that became the US War on Terror.

“Iraq is a security partner of the United States. Saddam Hussein is long gone. No current operations depend on 2002 AUMF,” committee chair Rep. Gregory Meeks (D-NY) said on Thursday.

However, while a couple of Republicans sided with their Democratic colleagues in voting for the resolution, some said it was too soon to shred the 2002 AUMF, since a replacement for the 2001 AUMF hasn’t been implemented yet.

“Real AUMF reform requires Congress and the administration working together on actual text to replace the aging 2001 and 2002 AUMFs to provide authorities needed to keep the American people, and, most importantly, our deployed troops, safe from terrorists,” said Rep. Michael McCaul (R-TX), the leading Republican on the committee.

“I think we all agree we've abdicated our Article I responsibilities, and we need to look at updating these very old authorized uses of military force,” McCaul said. “But I believe we must do this as part of a comprehensive, updated replacement to provide clear authorities against the terrorists who still plot to kill Americans at home and abroad.”

However, Meeks has insisted the 2001 law is sufficient to meet US defense needs. “There are continuing threats from Iranian-backed militants,” he said. “There are threats from ISIS [Daesh*] and al Qaeda*. That said, the 2002 AUMF doesn’t help us deal with any of these threats. Our forces would stay under Iraq under the 2001 AUMF, and the president can always defend America and our forces under Article II” of the US Constitution.

The 2002 law laid out a litany of accusations of then-Iraqi President Saddam Hussein, including that Iraq had failed to comply with the 1991 ceasefire agreement that ended the Gulf War, that Hussein harbored international terrorists and gave aid to al-Qaeda, and that in 1998, Congress had passed a law making it US policy to remove Hussein from power.

After US President Joe Biden ordered airstrikes in eastern Syria that ostensibly targeted Iraqi militias responsible for a rocket attack on an Iraqi base where US troops were stationed, several senators separately introduced a resolution that would repeal both the 2002 and 1991 AUMFs against Iraq.

However, as Intelligencer noted, Biden didn’t reference an AUMF in his justification for the strikes, as previous presidents Donald Trump and Barack Obama both did when ordering their own airstrikes in Syria and Iraq. Instead, Biden claimed the strike was in self-defense - an argument that even fellow Democrats largely haven’t bought.

“Congress should hold this administration to the same standard it did prior administrations, and require clear legal justifications for military action, especially inside theaters like Syria, where Congress has not explicitly authorized any American military action,” Sen. Chris Murphy (D- CT) said on February 26.

The 18th anniversary of the start of the Iraq War was on March 19.

*Daesh, al-Qaeda - terrorist groups banned in Russia and many other countries.