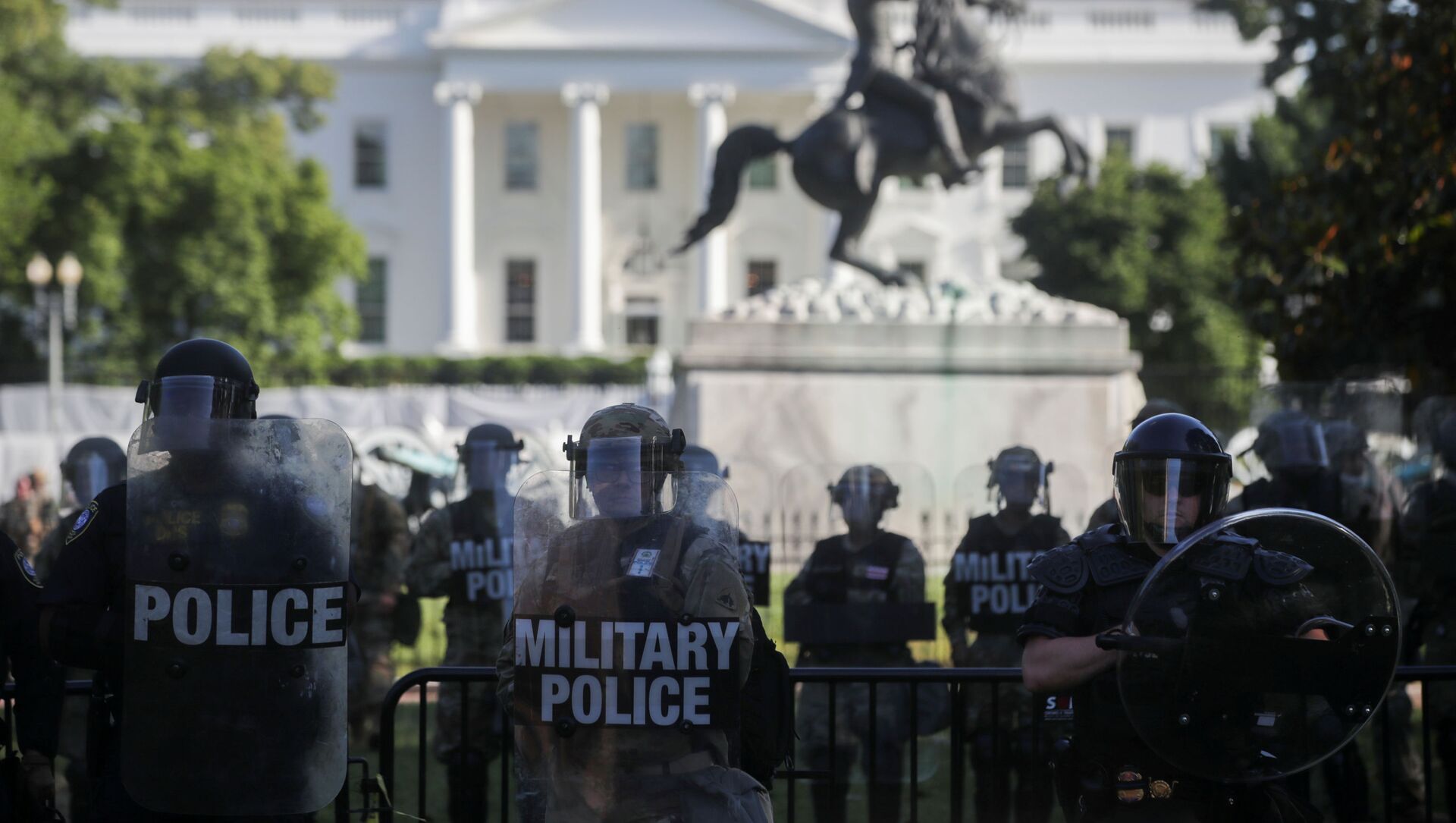 Morgan Artyukhina
All materialsWrite to the author
Since declaring China a “malign actor” who poses a major threat to the US in 2018, the US has opened a new ideological offensive by claiming China has a bad human rights record in Xinjiang and Hong Kong - an offensive that has only gained steam since US President Joe Biden took office in January.

In a sharp rebuke to US criticisms of Chinese internal policy, Beijing has published its own report highlighting the state of human rights inside the United States. The document notes extensive racial discrimination, continuous social unrest, record social inequality, and the government’s catastrophic response to the COVID-19 pandemic.

Titled "The Report on Human Rights Violations in the United States in 2020," the document published on Wednesday by the State Council Information Office begins with the infamous last words of George Floyd, a 46-year-old Black man who died in May 2020 while handcuffed and held against the ground by Minneapolis Police officer Derek Chauvin, who pressed his knee against Floyd’s neck as Floyd repeated “I can’t breathe!”

Floyd’s death touched off the largest uprising seen in the United States in half a century as millions poured into the streets to speak out against endemic anti-black violence by police and vigilantes - and were met with batons, tear gas and rubber bullets. More than 10,000 people were arrested by US police in just two weeks, and some activists face trumped-up charges that could land them in prison for decades.

“The US government, instead of introspecting on its own terrible human rights record, kept making irresponsible remarks on the human rights situation in other countries, exposing its double standards and hypocrisy on human rights,” the report states. “Standing at a new crossroads, mankind is faced with new, grave challenges. It is hoped that the US side will show humility and compassion for the suffering of its own people, drop hypocrisy, bullying, ‘Big Stick’ [diplomacy] and double standards, and work with the international community to build a community with a shared future for humanity.”

The report highlights the central role of the US government in allowing the COVID-19 pandemic to grow as widely and as quickly as it did, as well as for allowing it to persist for as long as it has.

The combined effect has been that with just 5% of the world population, the US has accounted for 25% of all confirmed cases of COVID-19 and almost 20% of deaths from the disease. On Thursday, data collected by The New York Times found that at least 545,300 Americans had died from COVID-19 and 30.5 million infected.

The US government’s slow response and the dismissive attitude of its central leadership enabled the virus to take hold and ensured that it hit communities far harder than was necessary. “Had the American authorities taken science-based measures to contain the pandemic, this could have been avoided,” the report notes. “But since they had not, the pandemic, as epidemiologist and former head of the US Centers for Disease Control and Prevention (CDC) William Foege had put it, is ‘a slaughter’ to the United States.”

Decline of US Democracy

In addition to the domination of American politics by moneyed interests, the report also notes the corresponding decline in public trust among the US population and the ultimate culmination of divisiveness, distrust and despondency in the January 6, 2021, insurrection at the US Capitol in Washington, DC.

During the incident, supporters of the sitting president, Donald Trump, rallied to defend his rejection of the November 2020 election results, and militant elements led a storming of the national legislature that temporarily dispersed Congress in the middle of certifying the election results. The move failed and the results were later certified, but not before the Capitol was ransacked and five people - four rioters and one Capitol Police officer -  were killed.

The incident caused shock around the globe as the “beacon of democracy” became “what its leaders used to condemn: being unable to avoid violence and bloody destruction during transfer of power.”

"The scenes (the US Capitol building violence) we have seen are the result of lies and more lies, of division and contempt for democracy, of hatred and rabble-rousing - even from the very highest levels,” the report quotes German President Frank-Walter Steinmeier as saying the day after the insurrection.

The report’s section on racial discrimination notes, in addition to a series of damning statistics illustrating systemic discrimination and inequality faced by minority communities, that world leaders have spoken up time and time again about the state of human rights in the US.

It notes, for example, that Michele Bachelet, the United Nations High Commissioner for Human Rights whose commentary about humanitarian crises in Venezuela and other nations often makes US news, has also been highly critical of the state of humanitarian affairs in the United States as well. For example, in May 2020 in response to the killing of Floyd and the mass demonstrations sparked by his death, Bachelet condemned racist police brutality as well as inequality and racial discrimination in health, education, and employment in the US. In the aftermath of the January 2021 Capitol insurrection, Bachelet said it was the “destructive impact of sustained, deliberate distortion of facts, and incitement to violence and hatred by political leaders.”

Bachelet spoke out again last week as Chauvin’s trial for Floyd’s death began, saying, “To end racial injustice in law enforcement, we cannot simply see the tip of the iceberg, we must face the mass below the surface. We must address the legacies of enslavement, the transatlantic trade in enslaved Africans, and its context of colonialism.”

Tendayi Achiume, the United Nations Special Rapporteur on contemporary forms of racism, racial discrimination, xenophobia and related intolerance, also condemned “the existential threat of police brutality and police violence” in the US and joined other members of the UN Human Rights Council in a statement supporting the George Floyd protests.

The ethnic minorities in the United States are devastated by racial discrimination, and racism exists in a comprehensive, systematic and continuous manner, according to the Report on Human Rights Violations in the United States in 2020, which was released by China's State Council Information Office on Wednesday
© Zheng Yue, Xiao Xiao

The report also notes the “countless crimes against humanity and genocides” committed by the US government against Native Americans, who have been deprived of the vast majority of their ancestral lands and “still live a life like a second-class citizen.” It notes the endemic poverty on reservations and the high rates of cancer, heart disease, and other illnesses caused by “toxic radioactive environments,” which cause high rates of birth defects as well. The report later notes that Native religions have been trampled on as well, particularly by the opening of sacred land sites for mining and logging.

In addition, the report notes the stark rise in anti-Asian racism, reporting that one-quarter of Asian-Americans have been bullied for their race in the last year and that “some American politicians have misled the public on purpose,” blaming Chinese people for the deadly pandemic.

In addition, it notes that asylum seekers were treated “cruelly,” highlighting the enormous migrant detention facilities as well as the deportation of thousands of children during the pandemic.

However, the report notes that inequality has spread across all of American society, with the poorest 165 million Americans holding as much wealth as the richest 50 Americans.

“The epidemic has aggravated wealth inequality,” the report says, noting that the government’s response to the out-of-control pandemic has caused mass unemployment, deprived millions of people of health insurance coverage, and plunged tens of millions of Americans into hunger.

Finally, the report notes the rogue behavior of the US abroad. It notes that the US has walked away from its commitments to the World Health Organization and Paris Climate Accord, has bullied international organizations such as the International Criminal Court and UN Human Rights Council, and kept unilateral sanctions in place against a number of countries during the pandemic. In addition, then-US President Donald Trump pardoned four Blackwater mercenaries previously convicted of slaughtering civilians in Iraq during the US’ occupation war there.