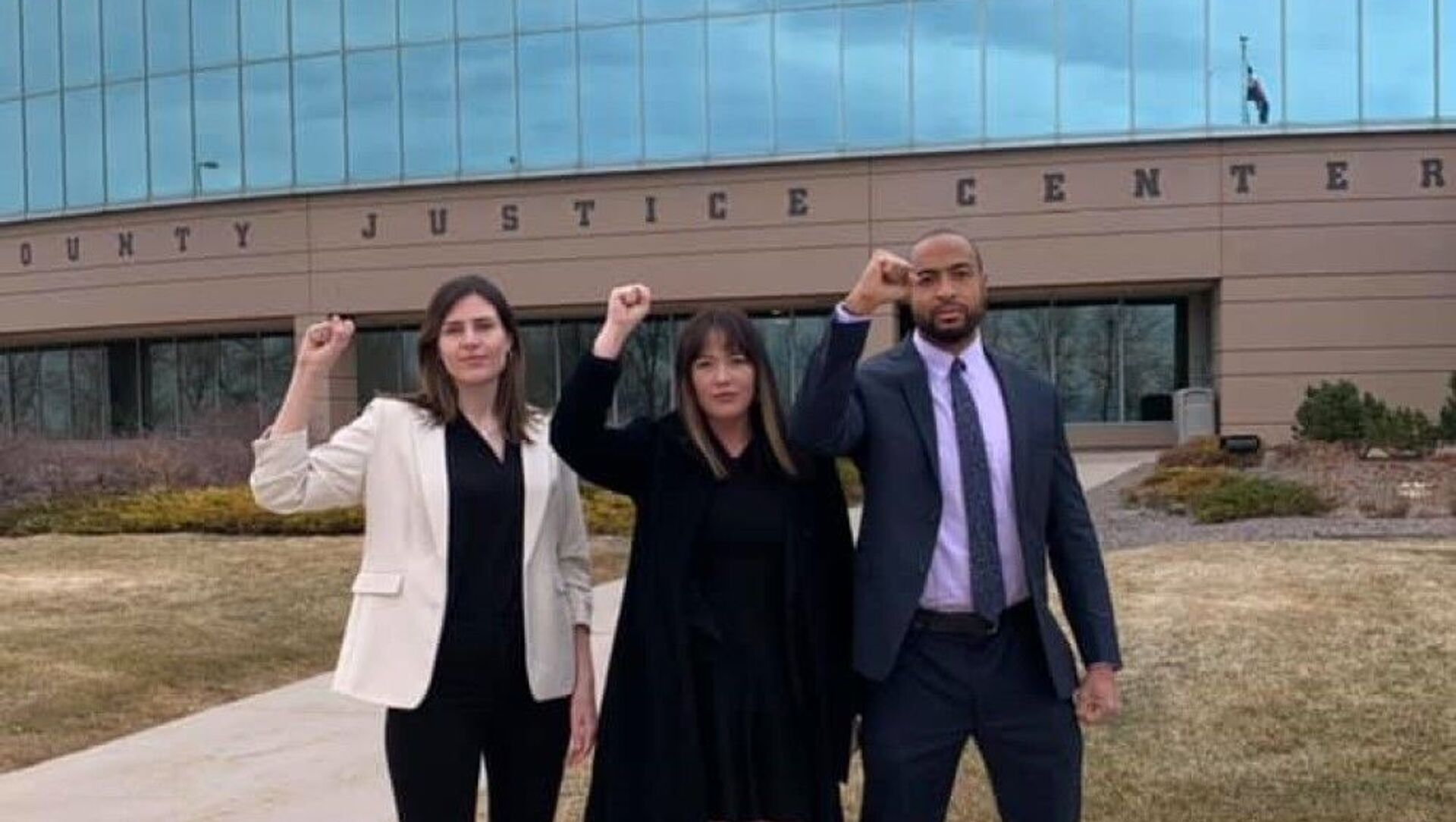 Morgan Artyukhina
All materialsWrite to the author
Three activists in Aurora, Colorado, are facing decades in prison for charges in connection with a July 2020 protest that surrounded an area police precinct. The trio’s lawyers have argued they were singled out by police for helping organize militant protests demanding justice for Elijah McClain, a 23-year-old Black man who died in police custody.

Adams County Judge Leroy Kirby decided at a pretrial hearing on Thursday that first-degree kidnapping charges against activists Lillian House, Joel Northam and Eliza Lucero were “a bridge too far,” finding that the July 3, 2020, demonstration outside the Aurora Police District 1 Substation was a “peaceful protest.”

The ruling came after a two-day hearing at the Adams County Justice Center intended to establish probable cause for the charges, which together could land the activists in prison for nearly 50 years.

"The burden of proof for this preliminary hearing was low,” Judge Kirby told the court, adding, “it was not met.”

However, the activists still face a slew of other charges, including inciting a riot, participating in a riot, and attempting to influence a public servant.

During a livestreamed briefing on Thursday evening, House said the charges were “filed against us not because we had committed any crime, but because we dared to stand up to the Aurora Police Department - and because we were effective.”

She called the loss of the kidnapping charges a “major blow to this political prosecution,” but noted they still face several charges that could land them in prison for as long as 36 years. “We are not afraid and we will not stray from this.”

“The case against us is ill-contrived, it is obvious persecution,” Northam added, noting the remaining charges are “just as retaliatory, just as unjustified” as the one thrown out.

“The prosecutors office in Adams County took a major ‘L’ today,” Northam said. “We have won a victory but we have not won ‘the’ victory.”

The charges stem from a July 3, 2020, protest demanding the firing of three officers involved in the death of Elijah McClain, killed during a police stop 10 months prior. The activists led hundreds of demonstrators on a march that ended at the police precinct, surrounding the station for much of the evening.

The defense has argued that House, Lucero, and Northam were targeted by the police for punishment because they are leaders of the local branch of the Party for Socialism and Liberation, a Marxist party that has helped organize the protests and greatly raised awareness of the community’s demands for justice over McClain’s death.

‘Light in a Whole Lot of Darkness’

McClain died on August 30, 2019, while in the custody of Aurora Police. As he was walking home from a convenience store that evening, a resident called the police, saying he looked “sketchy,” but noted he appeared unarmed and that no one was in danger. When McClain was confronted by three police officers - Nathan Woodyard, Jason Rosenblatt and Randy Roedema - he did not immediately respond due to having headphones on, leading to a confrontation in which police tackled McClain to the ground and put him in a chokehold that caused him to lose consciousness.

After the officers claimed to colleagues who arrived on the scene that McClain was “definitely on something” and had attacked them with “incredible, crazy strength,” paramedics injected him with ketamine as a sedative. On the way to the hospital, he suffered cardiac arrest and died three days later. According to the coroner’s report, McClain received a much higher dose than he should have received given his weight. Numerous medical associations have objected to the nebulous concept of “excited delirium” the officers claimed he was suffering from, as well as the administration of ketamine to him at all.

Later, in June 2020, several photos emerged on social media of several Aurora PD officers at the location of McClain’s arrest mocking the incident. The officers were placed on administrative leave.

People who knew McClain have denied he had a remotely aggressive demeanor, with one friend telling the Colorado Sentinel “he was the sweetest, purest person I have ever met. He was definitely a light in a whole lot of darkness.” A massage therapist, McClain also taught himself to play the violin, which he played for animals at a local animal shelter to soothe their anxiety.

A police investigation afterward exonerated Woodyard, Rosenblatt and Roedema of any criminal wrongdoing and a subsequent review of their actions in February 2020 found their application of force consistent with police training. The autopsy by the Adams County coroner found the cause of death “undetermined,” meaning it could also have been the result of natural causes, including his chronic asthma.

McClain was “violently struggling with officers, who were attempting to restrain him,” the November 2019 autopsy report by Dr. Stephen J. Cina read, which was based on the police reports of the incident. “Most likely the decedent’s physical exertion contributed to death. It is unclear if the officers’ actions contributed as well.”

However, an independent investigation commissioned by the Aurora City Council was published last month that eviscerated the officers’ actions, finding that "Aurora police and paramedics made substantial errors at nearly every stage of their interaction with Elijah McClain and the detectives tasked with investigating the incident that led to the 23-year-old’s death stretched the truth to exonerate the officers involved."

The report further noted that “the body-worn camera audio, limited video, and Major Crimes’ interviews with the officers tell two contrasting stories. The officers’ statements on the scene and in subsequent recorded interviews suggest a violent and relentless struggle. The limited video, and the audio from the body-worn cameras, reveal Mr. McClain surrounded by officers, all larger than he, crying out in pain, apologizing, explaining himself, and pleading with the officers.”

In the aftermath of McClain’s death, a movement emerged led by community activists demanding the officers involved in his death be fired and charged with murder, leading to Aurora’s largest-ever protests and an online petition that garnered millions of signatures. One of these protests was the July 3 rally, march, and encampment outside the police station for several hours, until police ordered them to disperse in the early morning of July 4. It was from this protest that the charges against the activists were brought.

Then on September 17, police coordinated a series of surprise raids in which Northam, House, Lucero, as well as two other protesters, Terrance Roberts and Russell Ruch, were arrested. In Northam’s case, a SWAT team brought an armored vehicle to his apartment and pounded his door down, while others were confronted by police during daily activities around town. After, they were held in jail for eight days in 23-hour-a-day COVID-19 lockdown conditions, despite a legal requirement for bond to be set within 48 hours of arrest.

However, the movement demanding justice has continued, and the arrest and charges against the activists have been condemned internationally. A committee for supporting the activist’s defense has been organized and a short documentary on their case and the broader movement for justice for McClain has been produced by the leftist news outlet BreakThrough News.

Edit: Quotes added to first section from post-hearing briefing by House and Northam