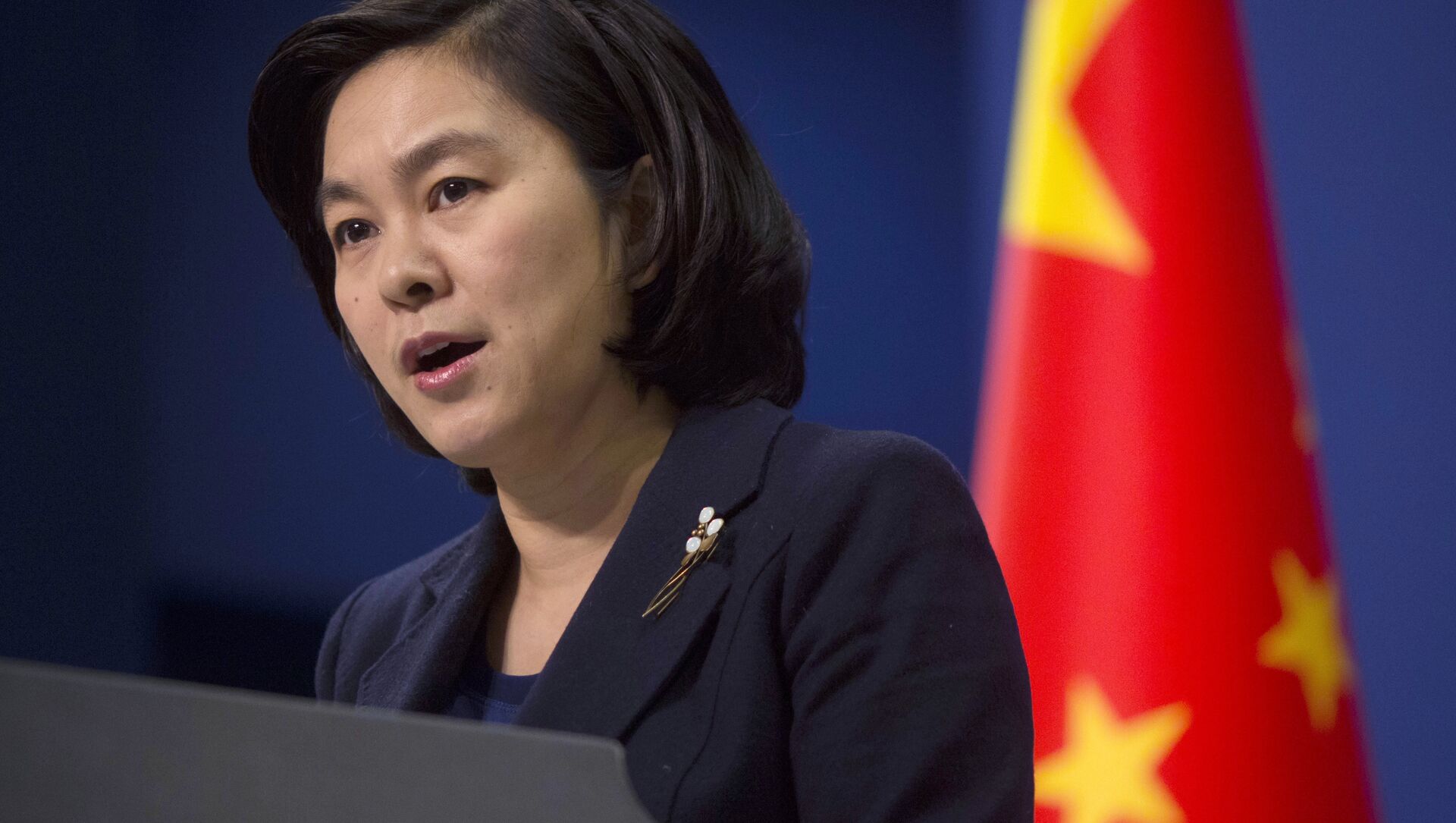 Beijing "strongly" condemned Western sanctions on individuals and entities operating in Xinjiang, slamming the move as being "based on nothing but lies and disinformation", Chinese foreign ministry spokeswoman Hua Chunying told reporters on Tuesday.

World
Countries Must Heed 'Just Voice' on Hong Kong Amid Belarus Joint Decree, Chinese Spokesperson Says
British and EU envoys had been summoned as a result, she said, adding retaliatory sanctions had been imposed on European individuals and entities.

She restated that the population of Uyghur ethnic minorities in Xinjiang had jumped from 5.5m to 12.8m over the last 40 years, adding life expectancy had nearly more than doubled from 30 to 72 years.

"People of all ethnic groups in Xinjiang, including the Uyghurs, enjoy each and every constitutional and lawful right. The fact that Xinjiang residents of various ethnic groups enjoy stability, security, development and progress, makes it one of the most successful human rights stories," she said.

But reports on alleged human rights abuses in Xinjiang cited by the four Western powers was "maliciously fabricated" by "anti-China politicians and scholars" based on false internal documents, victim statements and unknown sources, she said.

"All this proves that it's never human rights and truth that they care about. They just do not want to see China's success, development and better livelihood. That's why they have been using human rights issues as a pretext for interfering in China's internal affairs and frustrate China's development. What they have done is utter denigration and offense to the reputation and dignity of the Chinese people, blatant interference of China's internal affairs, and grave violation of China's sovereignty and security interests," Hua added.

Human Rights 'Judges' With a History of Genocide

The spokeswoman also slammed nations claiming to be "judges" of human rights as having "an ignoble record of human rights", adding they were not in a position to criticise China or shift blame for past violations.

"In the US, people like George Floyd still can't breathe," she said, adding the UN Committee on the Elimination of Racial Discrimination found that African descendants in the US and UK faced "systematic" racism.

She added German colonists had "slaughtered" more than 100,000 indigenous Namibian ethnic tribes from 1904 to 1908, including 75 percent of the Herero tribe and over half of the Nama people.

The US-UK coalition had also violated Geneva conventions in Afghanistan, and French militaries had massacred up to 5.5m people in Algeria, constituting war crimes, she said, citing reports.

The US and UK had also used the pretext of weapons of mass destruction to invade Iraq and later Syria, she said, marking ten years after the Syrian and Libyan crises began, which resulted in over 350,000 deaths in the former and displaced 400,000 people in the latter, creating a "large-scale humanitarian disaster".

"These countries show no repentance over the turmoil they created in other countries, and even go further to impose unilateral sanctions on others in the name of human rights, severely jeopardizing the rights to life, health and development of people in relevant countries. In the face of the epidemic, these above-mentioned most developed countries have turned a blind eye to their people's rights to life and health, leading to losses of tens of hundreds of lives," she said in a statement.

Nations obsessed with lecturing others on human rights contradicted their histories, she concluded, stating they should understand China was "not the same as Iraq, Libya or Syria".

"The days when foreign powers could force China to open its doors with cannons are long gone; also gone are the days when several so-called scholars and state media could unscrupulously malign China in collusion with impunity," she said.

She concluded, urging Western nations not to underestimate Chinese resolve to defend "national interests and dignity", stating: "It's a courtesy to reciprocate what we receive. They will have to pay a price for their ignorance and arrogance."

Asia
Beijing 'Deeply Proud' of US Sanctions as Hong Kong Electoral Reforms Passed, Chinese Officials Say
The comments come after the EU sanctioned four Chinese officials and one entity, citing alleged human rights abuses in China's westernmost province, for the first time since an arms race was sparked by the 1989 Tiananmen Square incident.

A full list of 11 names included Russian, Libyan, North Korean, South Sudanese and other individuals, according to reports.

The US also slapped sanctions on Beijing over the latter's electoral reform vote in Hong Kong, sparking anger in Beijing.