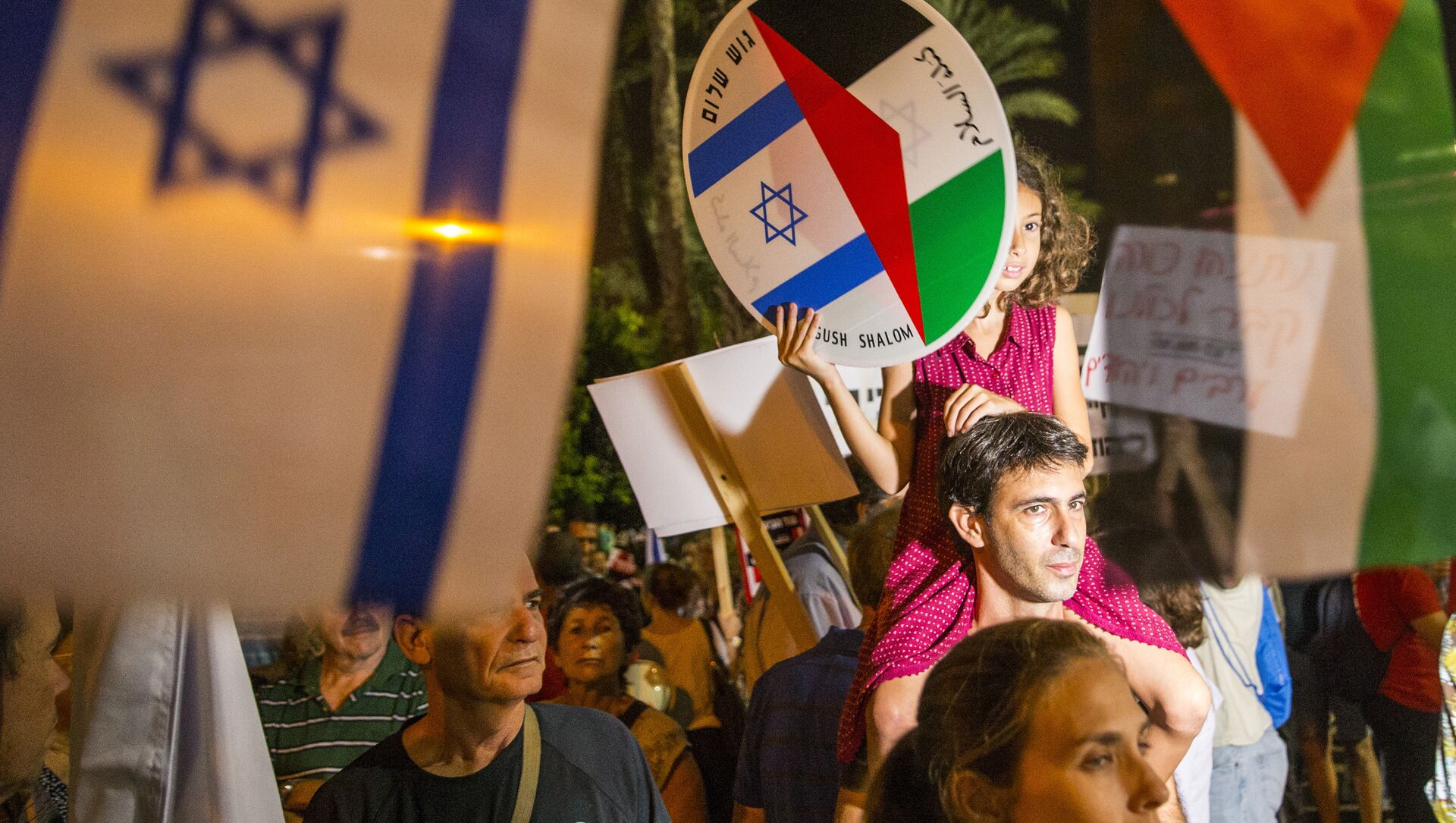 Tim Korso
All materialsWrite to the author
The Chinese authorities' initiative comes in the wake of the apparent failure of the US "deal of the century" devised under President Trump. The Palestinians rejected the plan, which included a two-state solution, over a number of its provisions.

The minister did not elaborate, which Israeli and Palestinian representatives he had in mind or when China is aiming to hold these talks.

China has offered its services as a mediator in the Israeli-Palestinian conflict in the past, posing as an alternative to the US and other countries, who took part in earlier efforts that have so far failed to resolve the decades-old conflict.

Despite the possibility that Beijing might give a fresh perspective to the decades-old problem, it is unlikely that Tel Aviv will take its offer to host talks, according to Efraim Inbar, president of the Jerusalem Institute for Strategy and Security think tank. He noted that Israel has traditionally seen the US as the "great power" that should host the country's talks with Palestinians.

Cooperation with Beijing in the matter of the Israeli-Palestinian conflict might become an "additional source of tension" between Tel Aviv and Washington, and Israel at present wants to be very much on the US's good side, Inbar adds.

Dr Emmanuel Navon, an International Relations expert who teaches at Tel Aviv University and at the Herzliya Interdisciplinary Centre in Herzliya, Israel, shares that opinion.

"Israel is unlikely to give a positive answer to China on its political initiative because doing so would be seen as a provocation in Washington. China has little to gain from mixing business with politics in the Middle East," he says.

The US took its last shot at dealing with the conflict under President Donald Trump, who unveiled his "deal of the century" plan following a controversial decision to recognise Jerusalem as the Israeli capital despite protests from the Palestinians. The Republican president's bold plan involved the creation of a Palestinian state, albeit without its own army – the new state's borders were to be guarded by Israeli forces. 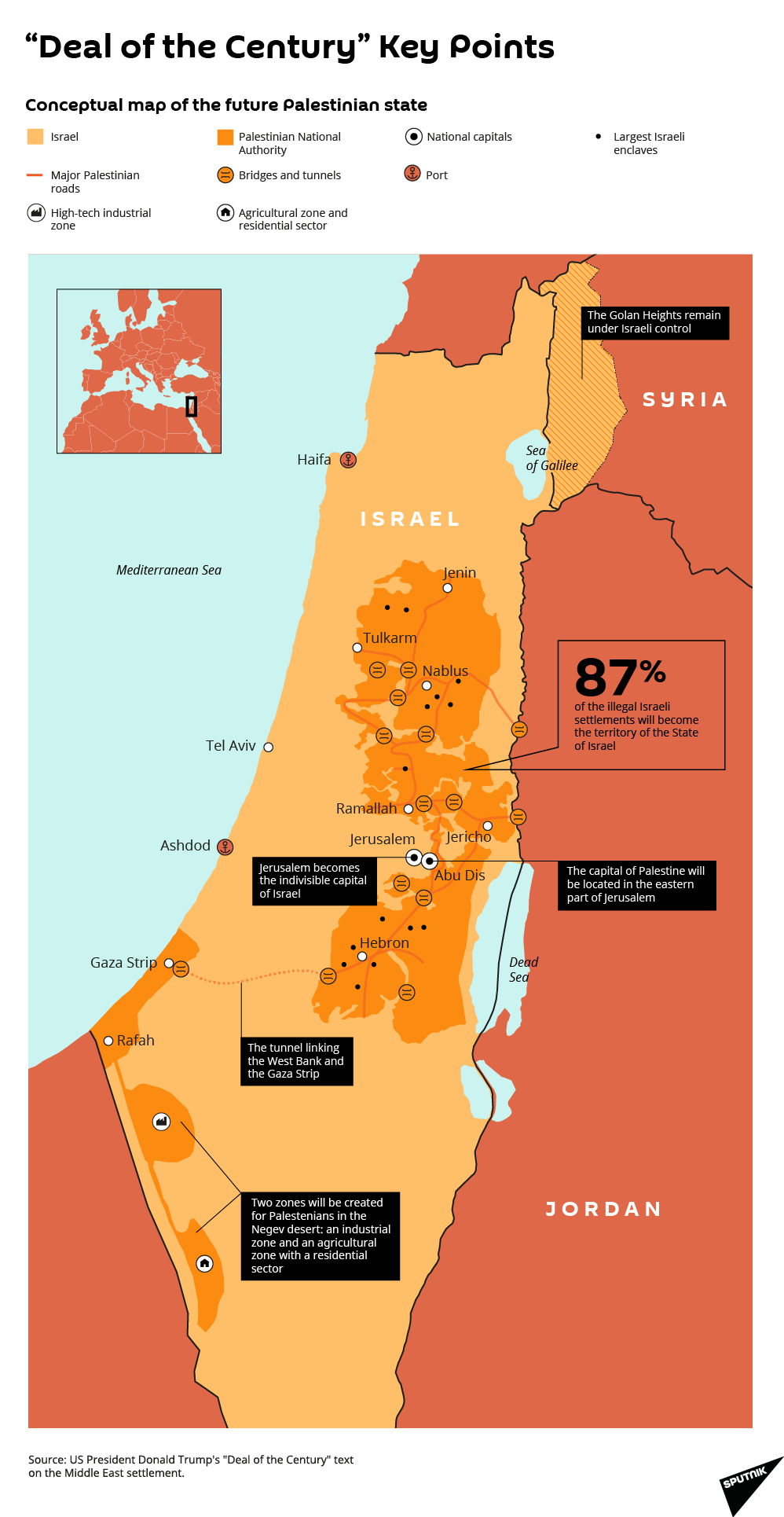 Deal of the Century
© Infographics

Under the ambitious plan, Israel would take possession of additional parts of the West Bank, while ceding patches of land on the border with Egypt to the fragmented state of Palestine. The latter would also include the Gaza Strip connected with the remaining Palestinian lands via a specially built highway. The plan denied the Palestinians a capital in Jerusalem, as they demand, but offered them certain rights within the holy city. In addition, Trump's plan stipulated massive investments in the economy of the future Palestinian state by the global community.

The entire "deal of the century", however, was strongly rejected by the Palestinian Authority and prominent Palestinian politicians. They condemned it as an attempt to "bribe" the Palestinian people to make them give up their lands to Israel and abandon any hope of building a normal state. The majority of nations in the Middle East were lukewarm about Trump's deal, while Iran rejected it outright, calling on the Palestinians to do the same.

While the US has engaged in resolving the broader Arab-Israeli conflict since the creation of the state of Israel, with varying degrees of success, and negotiating several peace treaties between Tel Aviv and Arab countries, Washington has had far less success in ending the Israeli-Palestinian conflict.

The US helped broker the Oslo Peace Accords that allowed Palestinians to regain certain civic powers in the controlled territories. However, all attempts by the White House to bring the two-state solution to life and end the decades-long conflict have so far failed.