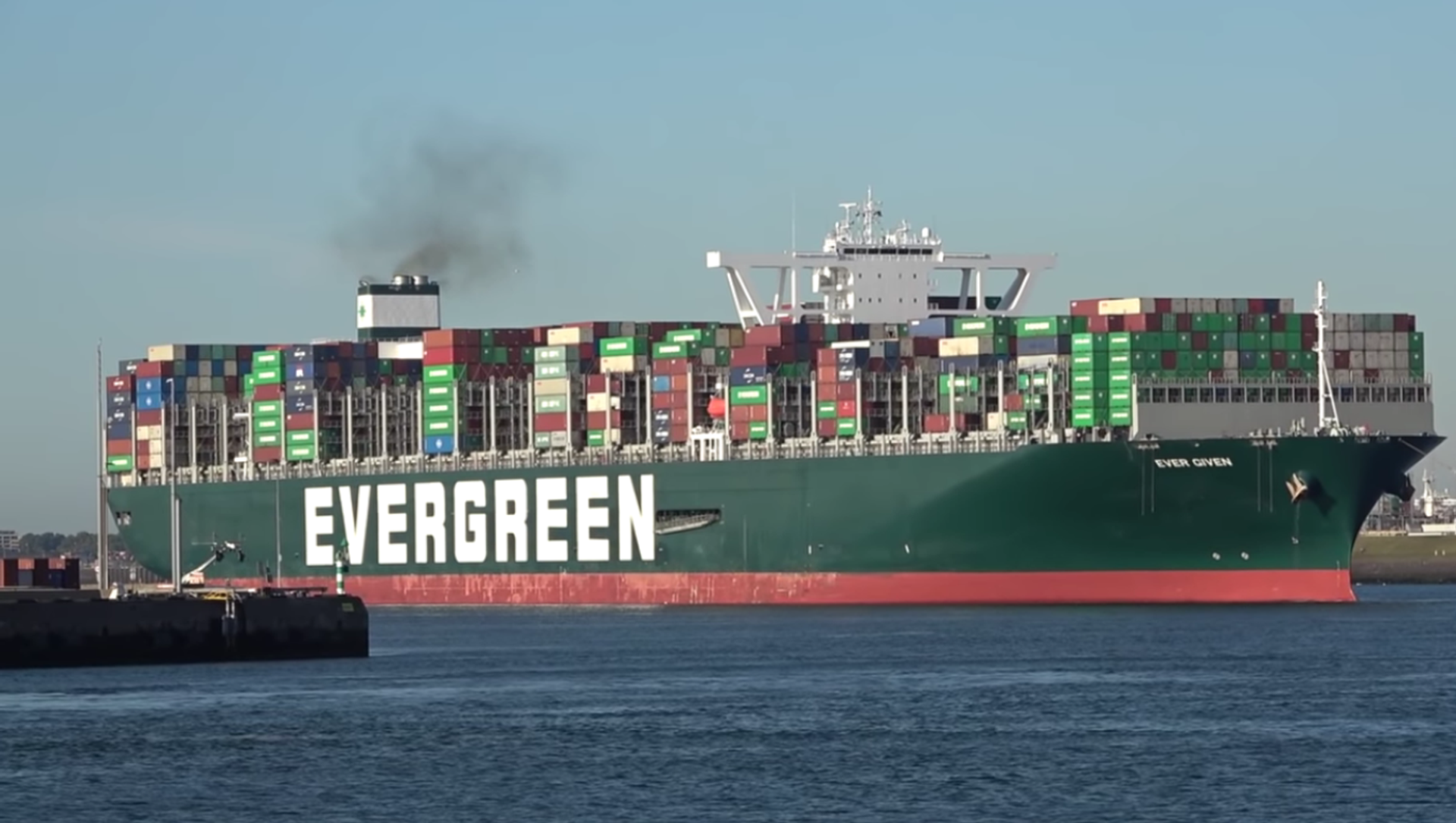 Morgan Artyukhina
All materialsWrite to the author
Big ships and little waterways scarcely mix well, but it’s still rare that one of the world’s largest container vessels finds itself abreast the Suez Canal, cutting off two seas’ worth of ocean-going traffic.

The crew of a Panamanian-flagged cargo ship found themselves in dire straits on Tuesday evening as their vessel found itself wedged sideways into the banks of the Suez Canal, blocking all traffic in both directions through the waterway.

“Ship in front of us ran aground while going through the canal and is now stuck sideways looks like we might be here for a little bit,” user fallenhearts17 posted on Instagram on Tuesday, accompanied by an alarming image of a huge container vessel sitting astride the Suez Canal.

According to ship tracking data, the vessel is the Ever Given, a 400-meter-by-59-meter cargo vessel with a gross tonnage of 219,079 tons flying the flag of Panama. The cargo ship is logged as having last visited Tanjung Pelepas, Malaysia, and is en route to Rotterdam, the Netherlands, where it was due to arrive in a week. That was, at least, until this afternoon.

It’s unknown how the huge ship arrived in its predicament, but fallenhearts17 did note that the ship had cut off their vessel, which appears to the Maersk Denver, before entering the canal.

Now, Egypt has mounted an all-out effort to try and induce the Ever Given to budge. In the photo, a small excavator can be seen attempting to dig out the ship’s bow from the sandy shore, and vessel tracking data shows close to a dozen tugs trying to push it into deeper water. 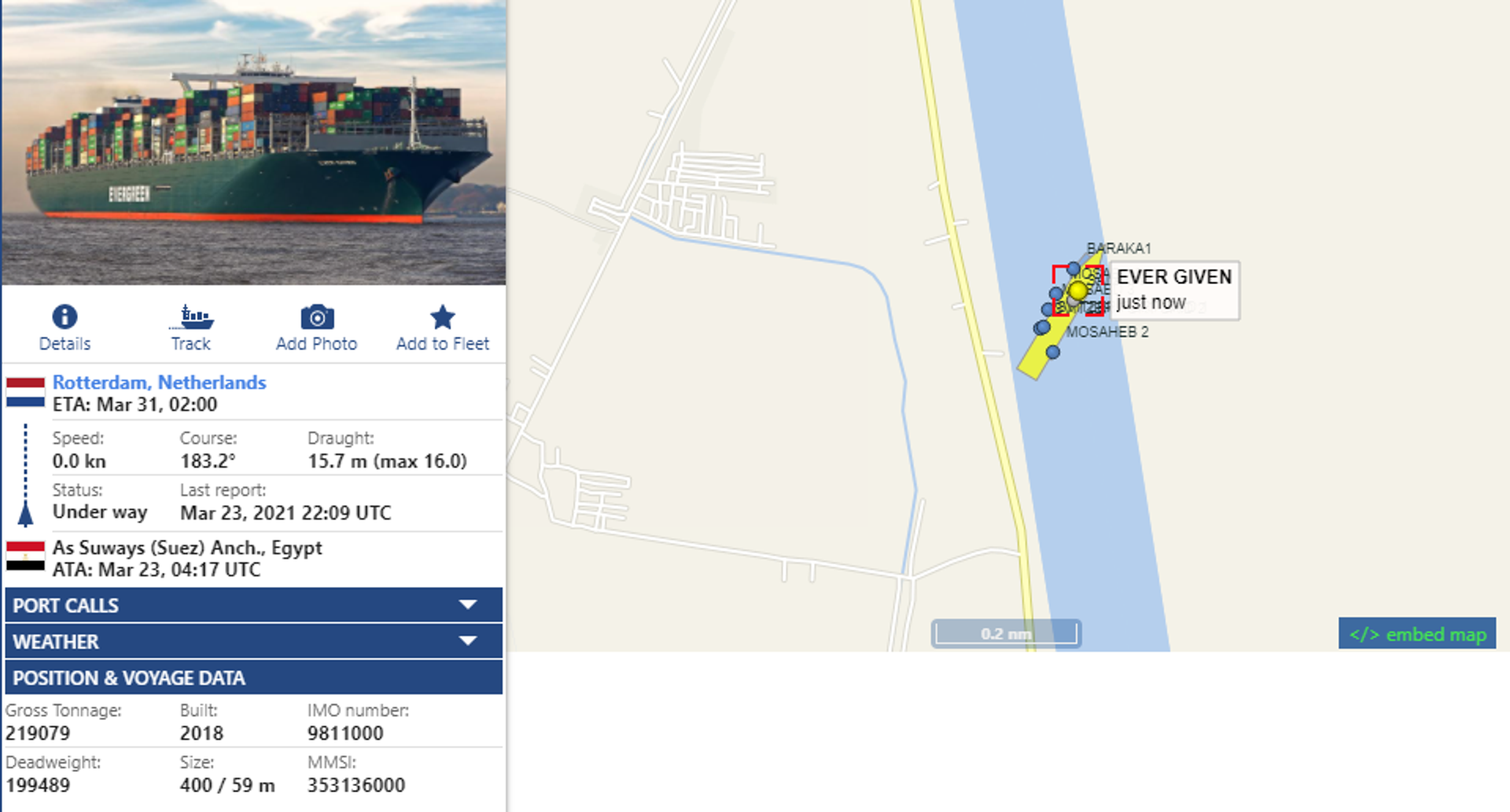 The Panama-flagged cargo vessel Ever Given seen sideways in the Suez Canal on Vesselfinder March 23, 2021, as several tugboats attempt to free her
© Sputnik Screenshot

With the ship sideways, no traffic can pass through the canal, which is the only way to get from the Mediterranean Sea to the Red Sea and the Indian Ocean beyond. Tracking data shows a true traffic jam developing at both ends of the 120-mile-long canal, with dozens of ships waiting to enter.

After all day trying to refloat the mega container ship 'Ever Given', in the Suez Canal, there is a steady log jam of ships waiting in the Mediterranean & Red Sea and in the canal itself pic.twitter.com/aGFKieoWqE

The busy waterway handles roughly 47 ships per day, although crashes often occur due to its narrowness. In 2014, two enormous container ships collided at the north end of the Suez Canal, and in 2018, a five-ship pile-up happened inside the canal after one ship’s engine cut out, causing the others to run into the back of one another.

The canal was built between 1859 and 1869 under the direction of French engineer Ferdinand de Lesseps and financed by the French and Egyptian governments. However, Cairo lost all control over the canal after the heavily indebted Egyptian government was forced to sell its shares in the managing company to the UK in 1875. In 1956, when the company’s 99-year lease expired, Egyptian President Gamel abd al-Nasser moved to nationalize the canal, after which a joint British-French-Israeli force temporarily invaded and occupied the canal zone, closing it for nearly a year before US and Soviet pressure forced them to withdraw.