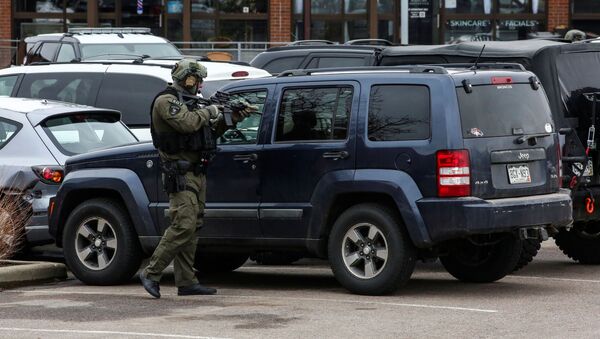 Subscribe
Daria Bedenko
All materialsWrite to the author
On Monday afternoon, police in Boulder, Colorado, issued an active shooter alert for the area of the King Soopers on Table Mesa Drive, urging the public to stay away from the area.

The shooting incident prompted a heavy police presence in the area, with the department reiterating warnings to keep away, stressing that the situation is still "very active".

According to media reports, at least six people, including a police officer, have been shot and killed. No official confirmation from police has followed.

Shortly after the King Soopers alert was announced, Boulder police urged people in another location, "near 17th and Grove", to shelter in place. At the time, the authorities were investigating whether the incident in the second location was connected to the King Soopers shooting.

What Is Known So Far About the Colorado Supermarket Shooting
02:25 GMT 23.03.2021
10 People Killed in Colorado Shooting, Including Police Officer, Police Chief Confirms

Boulder police chief Maris Herold confirmed during a briefing that there were 10 fatalities in the King Soopers shooting, with a police officer among those killed.

Herold identified the slain officer as Eric Talley, noting that he was one of the first on the scene and calling his actions "heroic".

Commenting on the death of the police officer, Boulder District Attorney Michael Dougherty said that "his life was cut much too short", promising a "painstaking investigation".

01:06 GMT 23.03.2021
Police Will Not Disclose Information on Boulder Shooting Fatalities Until Families Notified

Boulder District Attorney Michael Dougherty said that, as the investigation is underway, crime scene analysts are processing evidence inside the King Soopers building.

He went on to say that no numbers about fatalities will be released until families are notified.

Witnesses who have not spoken to the police were also asked to contact Boulder Police Department at 303-441-3333.

"We have multiple people who were killed in this incident," Boulder Police Commander Kerry Yamaguchi said at a press briefing, adding that one of the victims is a Boulder police officer.

Earlier, a shelter in place notice for people "near 17th and Grove" was issued by Boulder police, but it was unclear whether it was connected with the King Soopers shooting.

Shelter in place notice at 17th and Grove has been lifted. Police press conference near King Soopers scene will begin shortly.

The President has been briefed on the shooting in Colorado and he will be kept up to date by his team as there are additional developments.