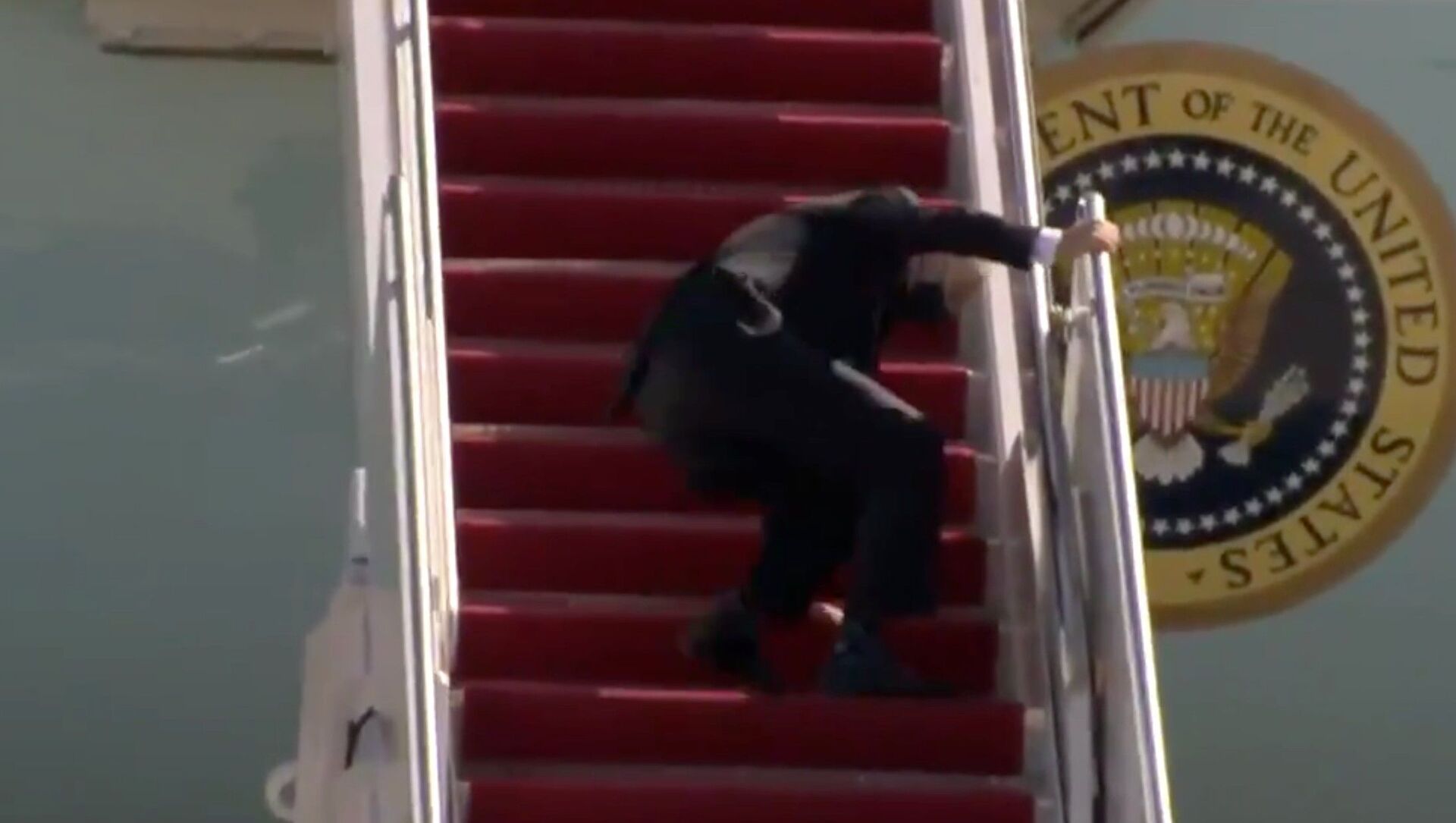 Svetlana Ekimenko
All materialsWrite to the author
US President Joe Biden, whose election campaign was marred by gaffes and 'senior moments', has kept up the momentum, physically slipping and verbally fumbling his way through the first months of his presidency, sparking chatter online, but with an overwhelmingly straight-faced national media dodging any discourse on his physical and mental health.

It may have been enough for his predecessor Donald Trump to be seen gingerly descending from a slippery stage ramp to spark wild speculation from detractors that the then-POTUS had health issues, but the just-recent collapse of US President Joe Biden seems to have elicited precious little concern among the national press.

​The President was climbing up to board Air Force One on Friday when, with his hand on the rail for support, he tripped up the steps. The 78-year-old Democrat pushed himself up only to see the same thing happen a second time, and a third, as he fell to his knees. 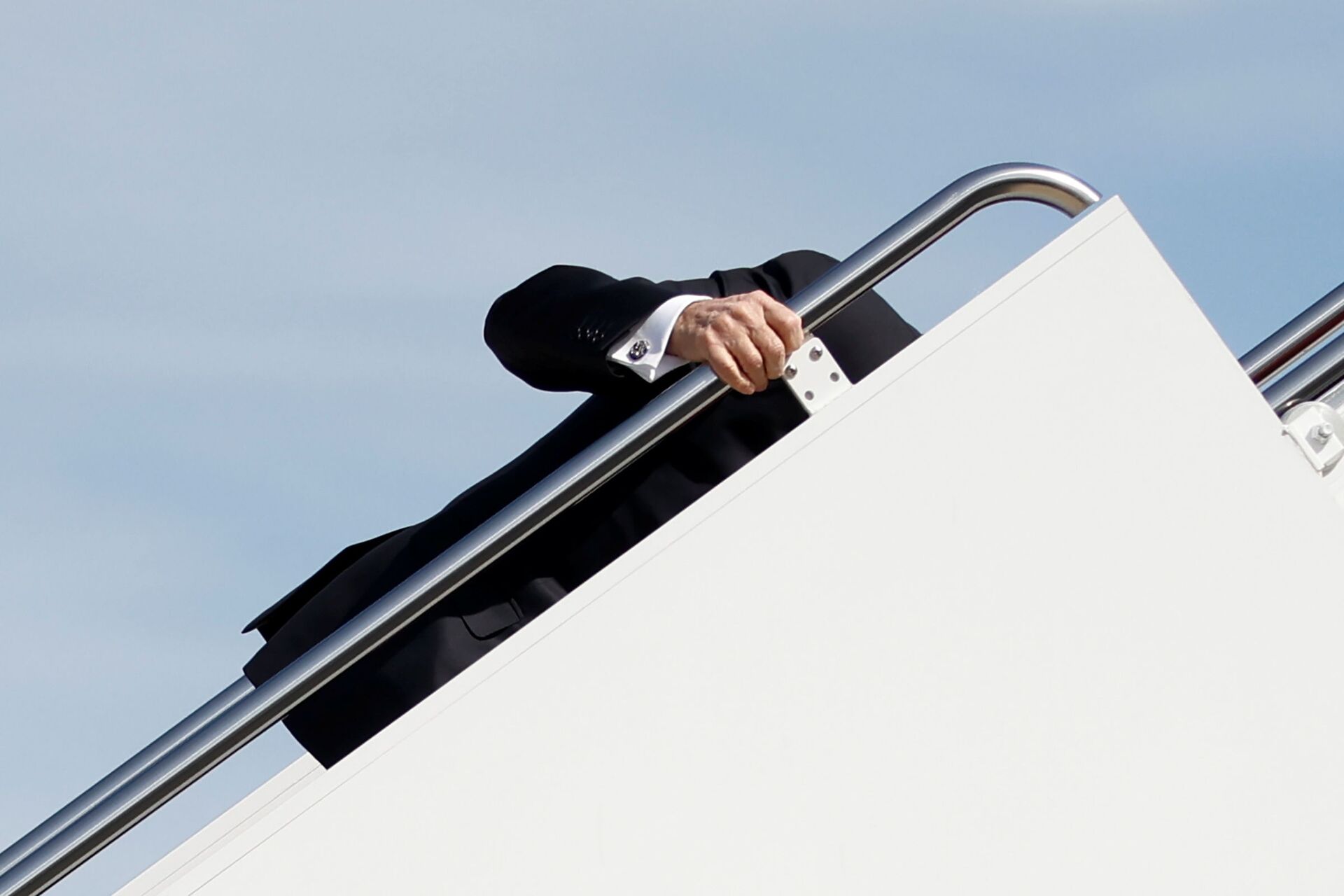 US President Joe Biden grabs onto the railing after he stumbled while boarding Air Force One as he departs Washington on travel to Atlanta, Georgia to promote the $1.9 trillion coronavirus disease (COVID-19) aid package known as the American Rescue Plan, at Joint Base Andrews, Maryland, US, March 19, 2021
© REUTERS / CARLOS BARRIA

Eventually, Biden regained some degree of traction as he made the rest of the journey to the cabin.

In the wake of the ‘unsteady’ moment, which went viral on the internet, triggering an avalanche of memes and jokes as well as fears about the President’s health, the White House blamed the “windy weather” for the incident.

Aides were quick to alleviate concerns, saying everything was fine. White House Communications Director Kate Bedingfield said Biden “did not even require any attention from the medical team”.

The New York Times headline after the incident read, “Biden is ‘doing 100 percent fine’ after tripping while boarding Air Force One.”

President Biden was “doing 100% fine” after falling off balance while boarding Air Force One on Friday, according to a press secretary. The president exited the plane when he arrived in Atlanta without an issue. https://t.co/VeuNMOY3rG

​Donald Trump’s son was quick to point out the lack of reaction in the media, as opposed to attacks on his father during his tenure, tweeting that "Biden’s loss of balance and constant loss of train of thought" might be a sign of "dementia".

​In a stark contrast, when Biden’s predecessor, Donald Trump was shown slowly descending the stage ramp following a commencement address at West Point in June 2020, an entire news cycle was made out of a video sparking wild speculation that he had health issues.

​Trump was forced to defend his careful gait, tweeting:

“The ramp that I descended after my West Point Commencement speech was very long & steep, had no handrail and, most importantly, was very slippery.”

Major news media pretend not to notice the slew of incidents involving Joe Biden that would have been surely trumpeted about in the press if another name, say, that of Donald Trump, had been featured.

On 18 March, Joe Biden referred to his Vice President Kamala Harris as “President Harris” while celebrating the US nearing the administration of 100 million COVID-19 vaccine doses.

​The incident echoed one dating to December 2020, when Biden similarly ‘promoted’ Harris, calling her “president-elect”.

In another recent speech, the POTUS struggled to remember the name of his Pentagon chief Lloyd Austin during a ceremony to promote two female generals, timed to coincide with International Women's Day.

“My . . . The guy who runs that outfit over there,” was all that the president was able to come up with.

​Most recently, the president fumbled for words as he weighed in on the importance of the government’s COVID-19 relief package.

Instances of ‘cognitive fog’ most likely would have made it to the national headlines if such ‘senior moments’ were displayed by Donald Trump.

The book by journalist Michael Wolff, “Fire and Fury,” which notably dealt loosely with facts and tracked the Trump campaign and the president’s first year in office, had caused a row before its release in January 2018.

The publisher of "Fire and Fury" has finally caught up to all the demand for the book -- and sales have reached 1.7 million copies https://t.co/GkTipJzQQq pic.twitter.com/s5D0im5nrf

​In the book, which became a New York Times bestseller, Wolff had written that according to staffers Trump used to repeat the same stories word-for-word within ten minutes and struggled to recognise old friends.

The national media had a field day, all but citing the 25th Amendment in the wake of the book’s release after dozens of lawmakers met with Yale psychiatrist Bandy Lee about Trump's alleged ‘fitness for office’.

Dr. Bandy Lee and all 37 psychiatrists can't be wrong!

He could go any minute!#TrumpsMentalUnhealthpic.twitter.com/qx2em6zVNo

​In response, Trump sent a barrage of tweets where he slammed the book’s author as a “total loser” and referred to himself as a "very stable genius."

Then-president Donald Trump defended his mental fitness to hold office in July 2020, describing the exam he allegedly took assessing his cognitive capabilities, and claiming doctors had been amazed by his ability to recall a simple string of words.

In an interview with Fox News medical contributor Marc Siegel, the president said he asked his physician whether there was “some kind of a cognitive test that I could take” in order to “shut these people up,” referring to critics of his mental acuity.