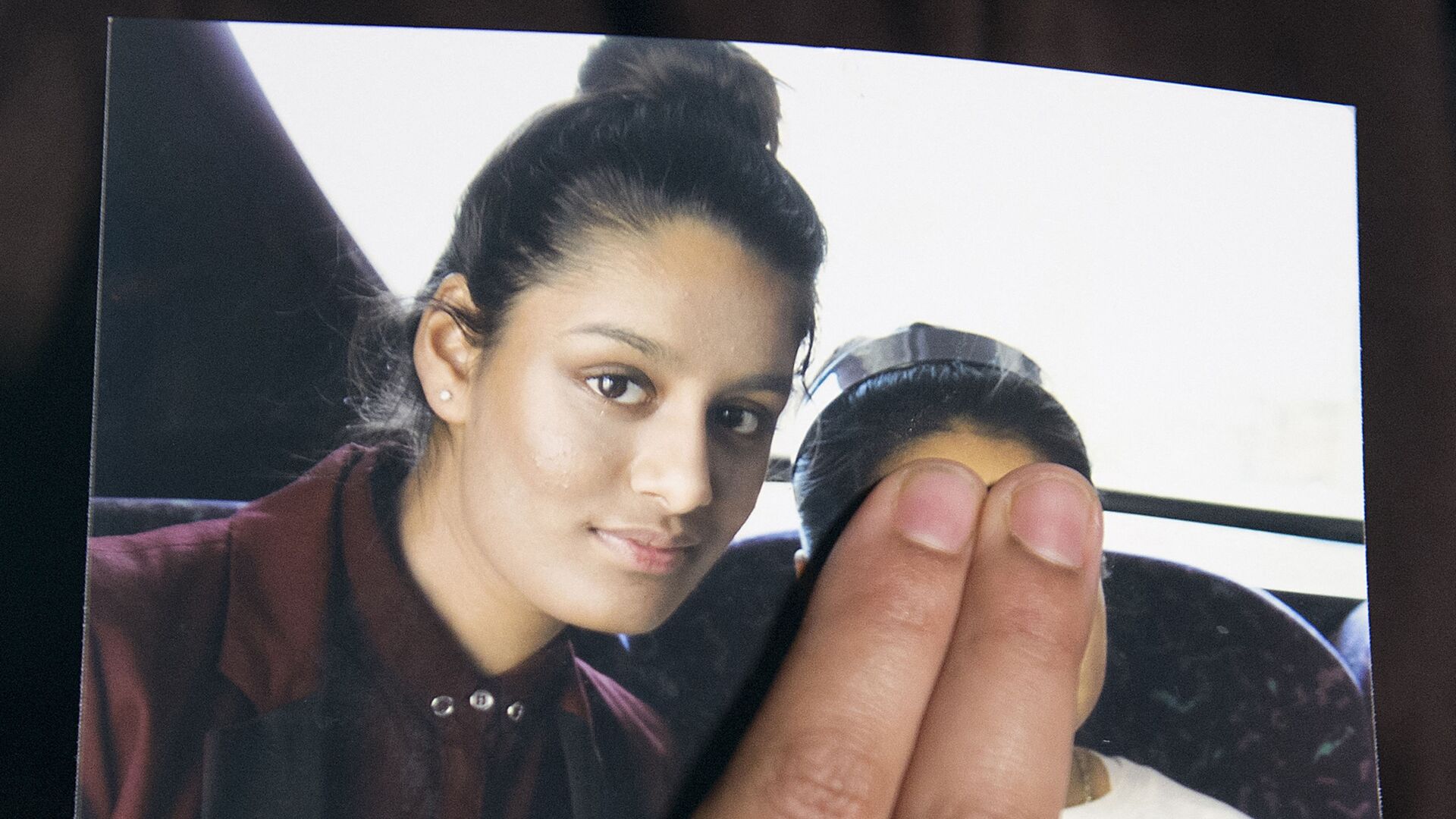 © AFP 2021 / LAURA LEAN
Subscribe
Svetlana Ekimenko
All materialsWrite to the author
Shamima Begum, formerly a niqab-clad UK teenager who ran away from school to marry a jihad soldier in Syria in 2015, was recently pictured at the Syrian internment camp al-Roj rocking a complete makeover, having ditched the full-length chador gown and black hijab in favour of casual skinny jeans, a hoodie, and a Nike baseball cap.

Shamima Begum, who as a teenager fled Britain at age 15 together with two other east London schoolgirls and travelled to Syria to join the Daesh* (ISIS) terrorist organisation in February 2015 is in the spotlight once again.

The former “Daesh bride” who acknowledged that when she saw her first severed head, “it didn’t faze me at all” has been in the Kurdish-run al-Roj formal internally-displaced person (IDP) and refugee camp in Al-Hasakeh governorate, northeastern Syria, for around two years.

Begum, 21, has been featured in a documentary which aired on Wednesday at the online Texas-based South By Southwest festival.

​The Return: Life After ISIS focuses on Begum, along with other Western women, living in varying degrees of statelessness in refugee camps in northern Syria.

In the film, Shamima Begum dressed in traditional Islamic garb such as the hijab; however, in new photos she's abandoned this look for casual, Western-style outfits, in order to appeal to the British public to give her a “second chance”, writes ITV.

​With straightened hair and trendy sunglasses, the woman who once voiced “no regrets about joining Islamic State”, is waiting as her lawyers challenge the decision to strip her of her British citizenship.

In February, the UK’s Supreme Court ruled on national security grounds that Begum cannot return to pursue an appeal against the decision.

Begum is seen saying in the film, which was partly funded by Sky TV, as appealing:

“I would say to the people in the UK, give me a second chance because I was still young when I left. I just want them to put aside everything they've heard about me in the media.”

Change of Heart or Sympathy Ploy?

The documentary, which was filmed after Spanish director Alba Sotorra was granted extensive access to Begum and other Western women throughout several months in the Kurdish-run camp, offers a glimpse of the anti-radicalisation programme sessions.

The women are shown writing letters to their younger selves to express regret about their departures for Syria.

Shamima Begum claims in the footage that she only defended the terrorist organisation in her first interviews for journalists after she was discovered in the camp in February 2019, because she was "scared of other women in her camp" who might come "into my tent and kill me and my baby".

Explaining why she travelled to Syria to join Daesh, Begum reveals she was the "black sheep in the family", feeling unloved by her mother, and seeking solace on the internet. After ostensibly watching videos of Syrians being bombed she "felt really guilty" and wanted to “defend suffering Muslims”.

"So I just wanted to be a part of something. My friends started practising (Islam) and they helped me come into the religion as well. And it just started with like learning my religion. And then it turned into wanting to come into Syria, wanting to help the Syrians," said Begum in the film, to be available on Sky Documentaries and streaming service Now later in the year.

The former London schoolgirl insisted she did not know about or support the brutal crimes committed by Daesh, such as rapes, tortures and beheadings.

Claiming she was a “naïve” teenager at the time, who did not even “speak the language”, Begum insisted the father of her children - a so-called Daesh fighter from the Netherlands – was still alive and had sent her a birthday card.

In the film, the 21-year-old grieves the deaths of her three children and intimates she had contemplated suicide. 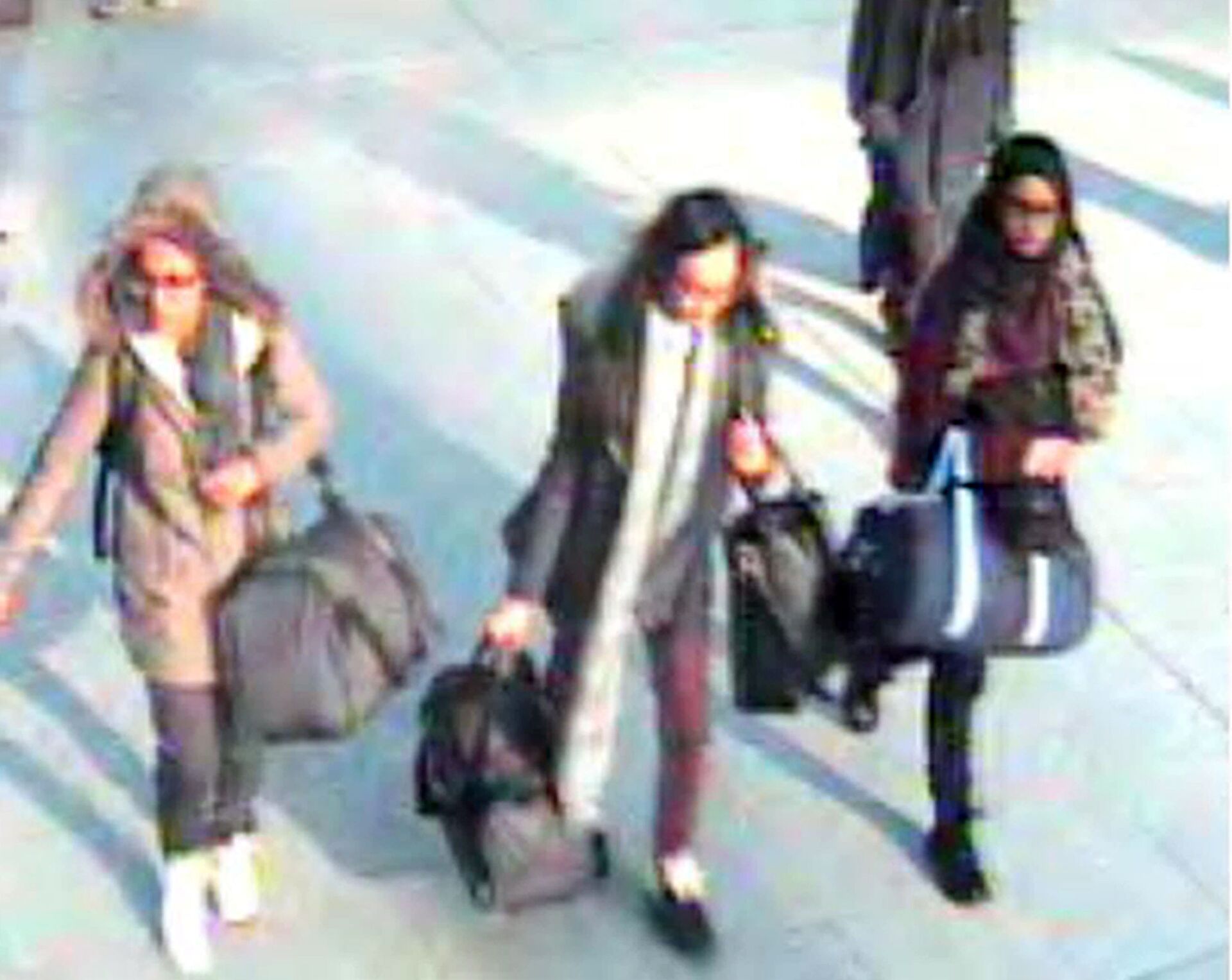 In this still taken from CCTV issued by the Metropolitan Police in London on Feb. 23, 2015, 15-year-old Amira Abase, left, Kadiza Sultana,16, center, and Shamima Begum, 15, walk through Gatwick airport, south of London, before catching their flight to Turkey on Tuesday Feb 17, 2015
© AP Photo / Metropolitan Police

Shamima Begum, who is currently challenging the decision to remove her British citizenship, has accused the UK government of "making up" stories that she was employed by the so-called Daesh morality police as an excuse to reject her pleas.

"… I think my government just wants to make me look bad and they couldn't find anything, so they just made it up."

The documentary, which was mostly filmed before the Supreme Court ruled that the government was entitled to prevent Begum from returning to the UK, was directed by Spanish filmmaker Alba Sotorra Clua.

In an interview with womenandhollywood.com she said:

"This is a film about dialogue, understanding, and forgiveness as a way for peace that challenges the viewer to listen without judging.”

Amid the continuing debate about the plight of women like Begum and whether to perceive their claims of ‘transformation’ as sincere or a ‘sympathy ploy’, Olympic sculptor Sir Anish Kapoor earlier slammed Britain's treatment of the former “Daesh bride” as a “disgraceful indictment of our national conscience”.

Critics, however, point out that only 40 of the 400 terrorists who have been allowed to return to the UK have actually been prosecuted.