Is Syria Finally on Track to Return to the Arab League Nearly Ten Years After Expulsion? 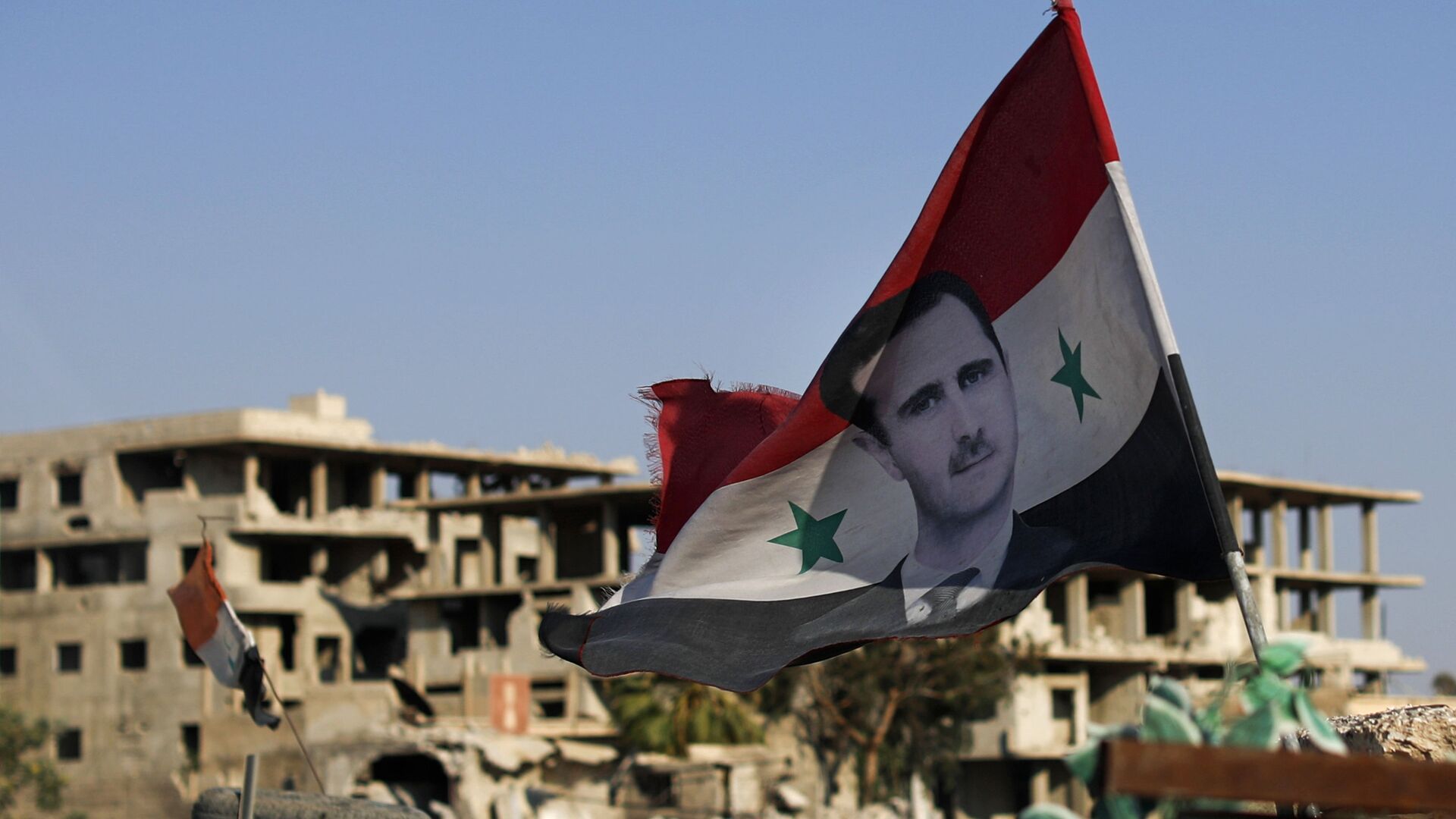 © AP Photo / Hassan Ammar
Subscribe
International
India
Africa
Ekaterina Blinova
All materialsWrite to the author
Between 8 and 12 March, Russian Foreign Minister Sergei Lavrov made a three-leg Middle East trip to the United Arab Emirates (UAE), Saudi Arabia and Qatar. A byproduct of the Gulf tour was a renewed discussion over the resumption of Syria's membership in the Arab League following its suspension in November 2011.

Syria’s readmission to the Arab League, a regional organisation of Arab states aimed at coordinating the political, cultural, economic and social programmes of its members, corresponds to the interests of the people of Syria and the region in general, stated UAE’s Minister of Foreign Affairs Sheikh Abdullah bin Zayed Al-Nahyan during the 9 March joint press conference with his Russian counterpart, Sergei Lavrov.

Saudi Foreign Minister Faisal bin Farhan Al Saud was more laconic, telling the press that Syria should return "to the Arab embrace and achieve stability and security". In January 2021, Moscow and Riyadh agreed on the "importance of Syria returning to the Arab League as soon as possible", adding, however, that "many problems will have to be resolved along the way".

In contrast to his Gulf neighbours, Qatari Foreign Minister Mohammed bin Abdulrahman Al-Thani appeared reluctant to the idea, suggesting that the reasons for Syria’s suspension from the Arab League in 2011 remain in place.

Earlier this year, other members of the major Arab alliance also spoke in favour of Syria's return. On February 22, Iraqi Foreign Minister Fuad Hussein advocated the measure during a meeting with the Secretary General of the Gulf Cooperation Council (GCC) Nayef bin Falah al-Hajraf. His Egyptian counterpart Sameh Shoukry stressed that "Syria’s return to the Arab League as a stable and active state would be vital for maintaining Arab national security," while addressing the Council of Arab League Foreign Ministers on 3 March. 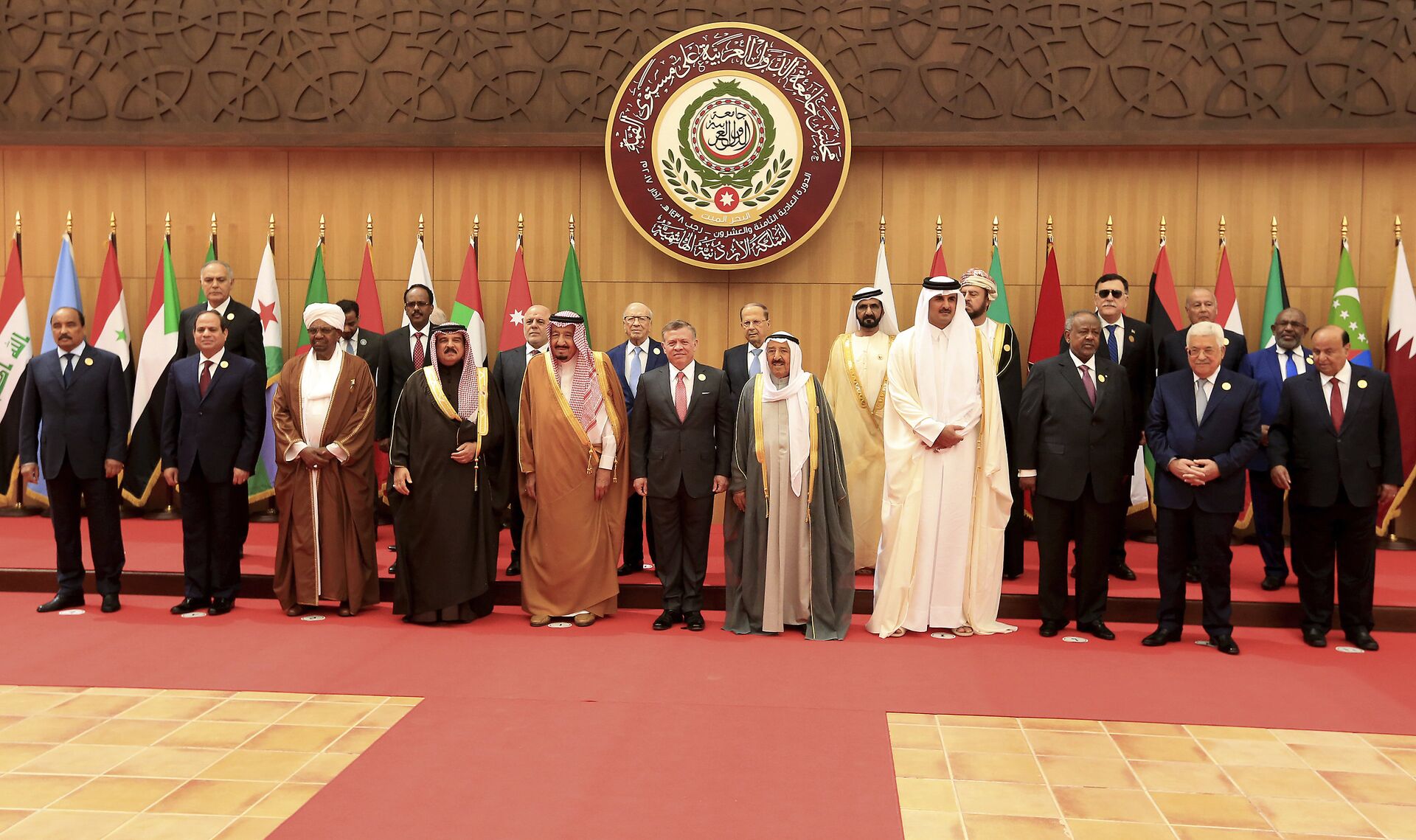 Twenty one kings, presidents and top officials from the Arab League summit pose for a group photo, at a gathering near the Dead Sea in Jordan
© AP Photo / Raad Adayleh

Nearly ten years ago, Syria was suspended from the Arab League, following clashes between the government forces and armed opposition groups. The Arab Republic, one of the six founding members of the entity, denounced the move as "illegal and a violation of the organisation’s charter".

In March 2012, the pan-Arab group decided to grant its seat to the National Coalition for Syrian Revolutionary and Opposition Forces, the opposition group that boasted backing of almost 100 states, including the US.

However, two years later, Arab League Secretary General Nabil al-Arabi announced that Syria's seat in the group would remain vacant as the Syrian opposition forces had failed to establish the appropriate institutions and "must take further steps in this regard".

Following Russia's involvement in Syria's affairs in 2015 at the behest of the country's government, a silver lining appeared for Damascus' return to the pan-Arab alliance. According to Arab Centre Washington DC (ACW), in 2018 key Gulf States started demonstrating an interest in reinstating Syria's membership in the league.

The official reopening of the Nasib border crossing between Jordan and Syria in October 2018 prompted hopes that it would "revitalise the regional economy and reconnect Syria to the Gulf countries", according to the think tank. 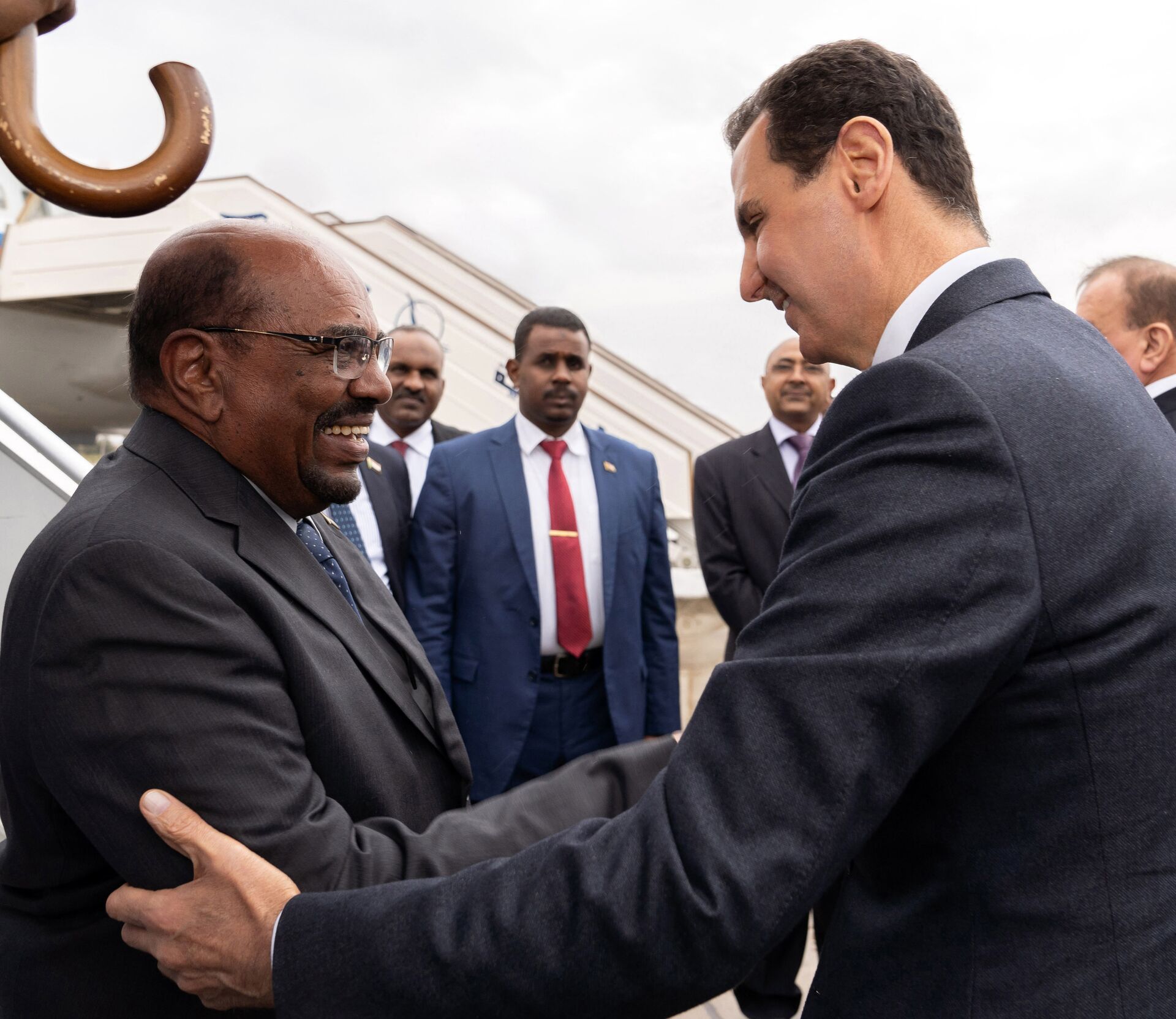 On 16 December 2018, the Sudanese president, Omar al-Bashir, became the first Arab League leader to visit Syria following its expulsion. According to the Guardian, the visit was interpreted by observers as a gesture of friendship on behalf of Saudi Arabia, which maintained close ties with Khartoum. "Arab League set to readmit Syria eight years after expulsion," the media outlet's headline read.

The same month, the UAE reopened its embassy in Damascus in December 2018, while Bahrain signalled that the kingdom had not broken off diplomatic ties with Syria despite the civil war. On 31 December 2018, Kuwait signalled that more Arab nations would reopen their embassies in the Arab Republic, adding, however, that the Arab League should give a nod to this first. Several North African countries – Algeria, Morocco and Tunisia – also hailed Damascus' prospective return to the Arab fold.

However, in February 2019, Reuters broke that the Trump administration had successfully lobbied the Gulf States to put brakes on restoring ties with Syria. For its part, the pan-Arab group stated the same month that "there was no consensus" among member states on the reinstatement of Syria’s membership. 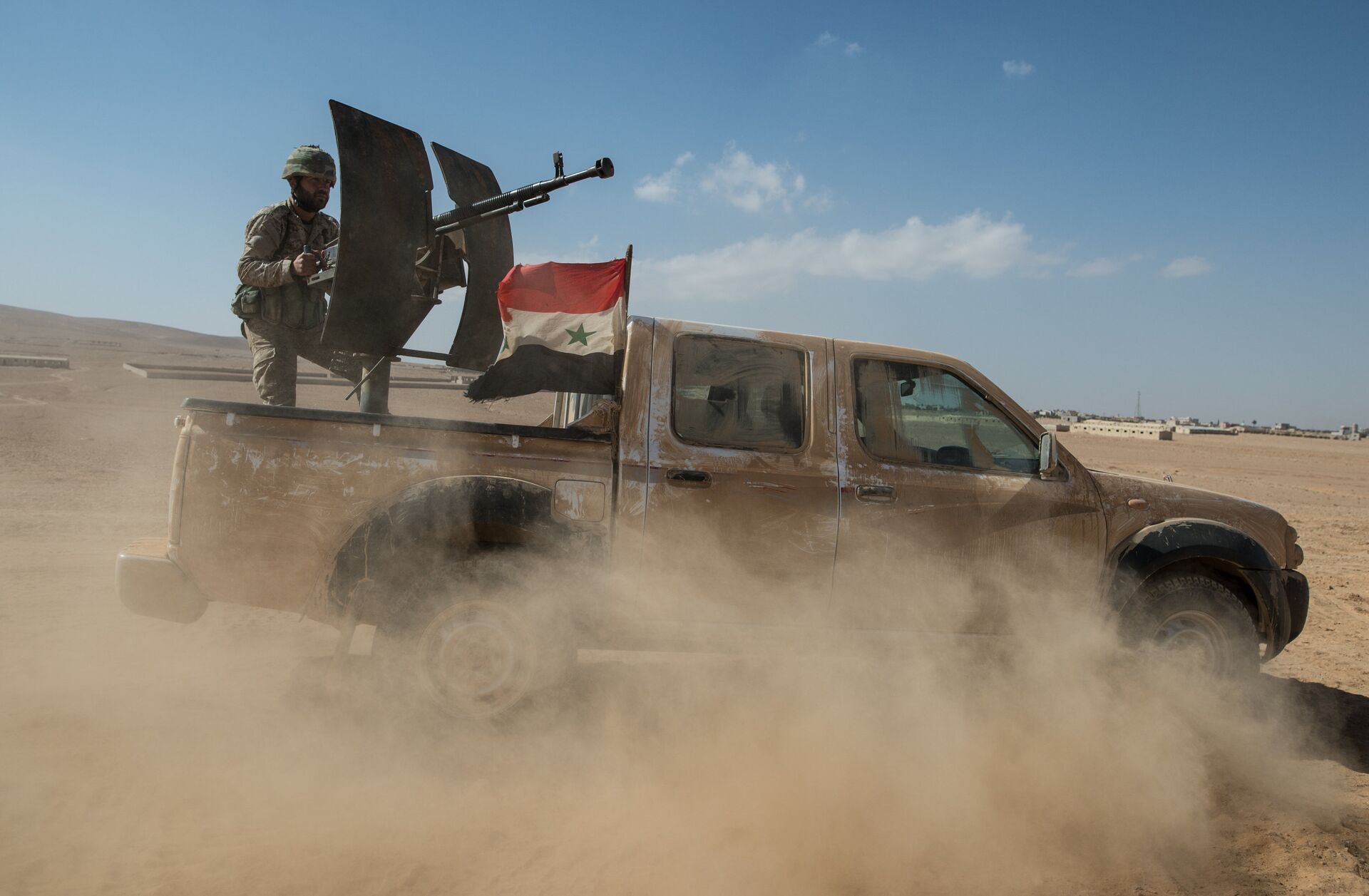 A truck of the Syrian Arab Army (SAA). (File)
© Sputnik / Iliya Pitalev
/
Go to the mediabank

New Attempts to Bring Syria Back

Nevertheless, the thaw between Syria and the rest of the Arab world continued: in February 2020, Algerian President Abdelmajid Tebboune resumed calls for Syria's readmission to the pan-Arab entity while Jordan’s minister of industry and trade paid a visit to Damascus on 5 March 2020 for the first time since October 2018.

Meanwhile, Joe Biden's victory in November 2020 gave the shivers to the Gulf monarchies due to the new US administration's plans to resume the Iran nuclear deal and lift sanctions on the country. Washington's decision to freeze Trump's deals with the UAE and Saudi Arabia as well as the US intelligence community's insinuations against Saudi Crown Prince Mohammed bin Salman over the death of dissent journalist Jamal Khashoggi sparked criticism from the Saudis and increasing calls for "strengthening Arab and Islamic unity".

On 3 March 2021, the Riyadh-based newspaper Arab News published an op-ed  titled "Why Arab League should seek reconciliation with Syria" by Saudi political commentator Zaid M. Belbagi. According to Belbagi, the Arab governments' common belief is that they should play a primary role in tackling the Syrian crisis. He added that the Arab League had already resumed some of its activities in Damascus for the first time since November 2011.

"After a decade of conflict, it is clear that Assad will likely remain in power for the foreseeable future," the commentator wrote. "And, with that, Damascus is poised to regain its centrality in the Middle East… The Arab League must now work toward reconciliation."