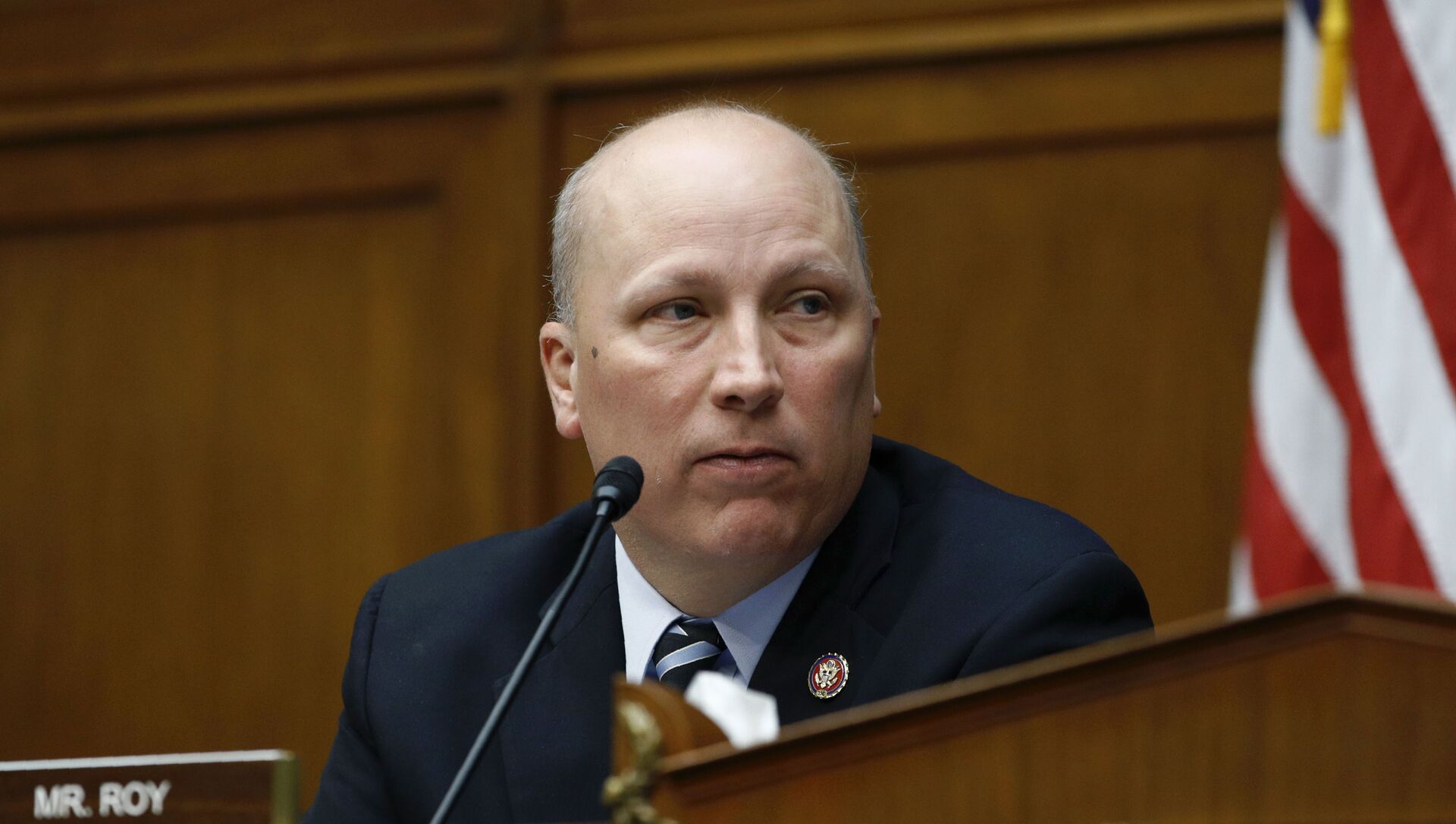 © AP Photo / Patrick Semansky
Subscribe
Evan Craighead
All materialsWrite to the author
The Subcommittee on the Constitution, Civil Rights, and Civil Liberties held a hearing Thursday on 'Discrimination and Violence Against Asian Americans.' The hearing comes amid an uptick in targeted violence against Asians in the US, including the recent mass murder of eight people - six of them Asian women - in Atlanta, Georgia.

During the March 18 hearing, Rep. Chip Roy (R-TX) declared that victims of the Atlanta shooting deserve justice, just like "victims of cartels moving illegal aliens deserve justice. The American citizens in south Texas that are getting absolutely decimated by what's happening at our southern border deserve justice."

He also said "justice" was owed to individuals whose businesses were looted or damaged amid race-related demonstrations in the wake of George Floyd's May 2020 murder by Minneapolis Police Department cops.

However, Roy stunned colleagues when he brought up lynching as a form of justice.

"There's an old saying in Texas about 'find all the rope in Texas and get a tall oak tree.' You know, we take justice very seriously and we oughta do that," he said. "Round up the bad guys. That's what we believe."

GOP Rep. Chip Roy uses a hearing on anti-Asian hate to speak up for victims of ‘cartel’ violence and the ‘looting’ last summer. In the next breath, he complains about ‘the policing of rhetoric’ pic.twitter.com/4jMHtOMUCT

Roy doubled down on his comments in a statement to Mediaite.

"Apparently some folks are freaking out that I used an old expression about finding all the rope in Texas and a tall oak tree about carrying out justice against bad guys," the GOP lawmaker said.

"I meant it," he said. "We need more justice and less thought police. We need to stop evil doers – such as those who carried out the attack in Atlanta this week, or cartels abusing little children, or those who kill our cops on the streets. We should restore order by tamping out evil actors."

According to the lawmaker, the country is presently on a path to "turn American into an authoritarian state like the Chinese Communists who seek to destroy us."

"No apologies," he concluded.

Roy also blasted the Chinese government during the hearing, alleging that Beijing hid the "reality" of the novel coronavirus.

He argued that former US President Donald Trump and other politicians' were within their right to publicly criticize the Chinese government, and question the origins of the COVID-19 novel coronavirus because Beijing officials are the "bad guys."

Chip Roy pivoted from glorifying lynchings to criticizing the Chinese Communist Party during a hearing about violence against Asian Americans pic.twitter.com/uPvBZLtuYj

Many critics of the former US president's rhetoric, including current White House Press Secretary Jen Psaki, have tied his comments to the uptick in violence against Asian Americans.

Reps. Ted Lieu (D-CA) and Grace Meng (D-NY), who are both Taiwanese Americans, have publicly responded to Roy's comments.

"Chip Roy glorified lynching at a hearing on violence against Asians. The largest mass lynching in US history was against Chinese immigrants," Lieu tweeted. "I served on active duty in the US military to defend [Roy's] right to say stupid, racist stuff. I just wish he would stop saying it."

Meng spoke directly to Roy on Thursday and said that Trump, Republicans and any other politicians can "can talk about issues with any other country that you want -- but you don't have to do it by putting a bullseye on the back of Asian Americans across this country, on our grandparents, on our kids."

“Your president, your party and your colleagues can talk about issues with any other countries that you want, but you don’t have to do it by putting a bull's eye on the back of Asian Americans across the country – on our grandparents, on our kids!" pic.twitter.com/i1EKCARY38

During the subcommittee hearing, House Judiciary Committee Chairman Jerrold Nadler (D-NY) noted that "[h]ate crimes and hate incidents against Asian Americans have been on the rise since 2017."

"Last year alone, nearly three thousand eight hundred incidents were reported, with about sixty eight percent of Asian Americans reporting that they have experienced racial slurs or verbal harassment since the pandemic began."