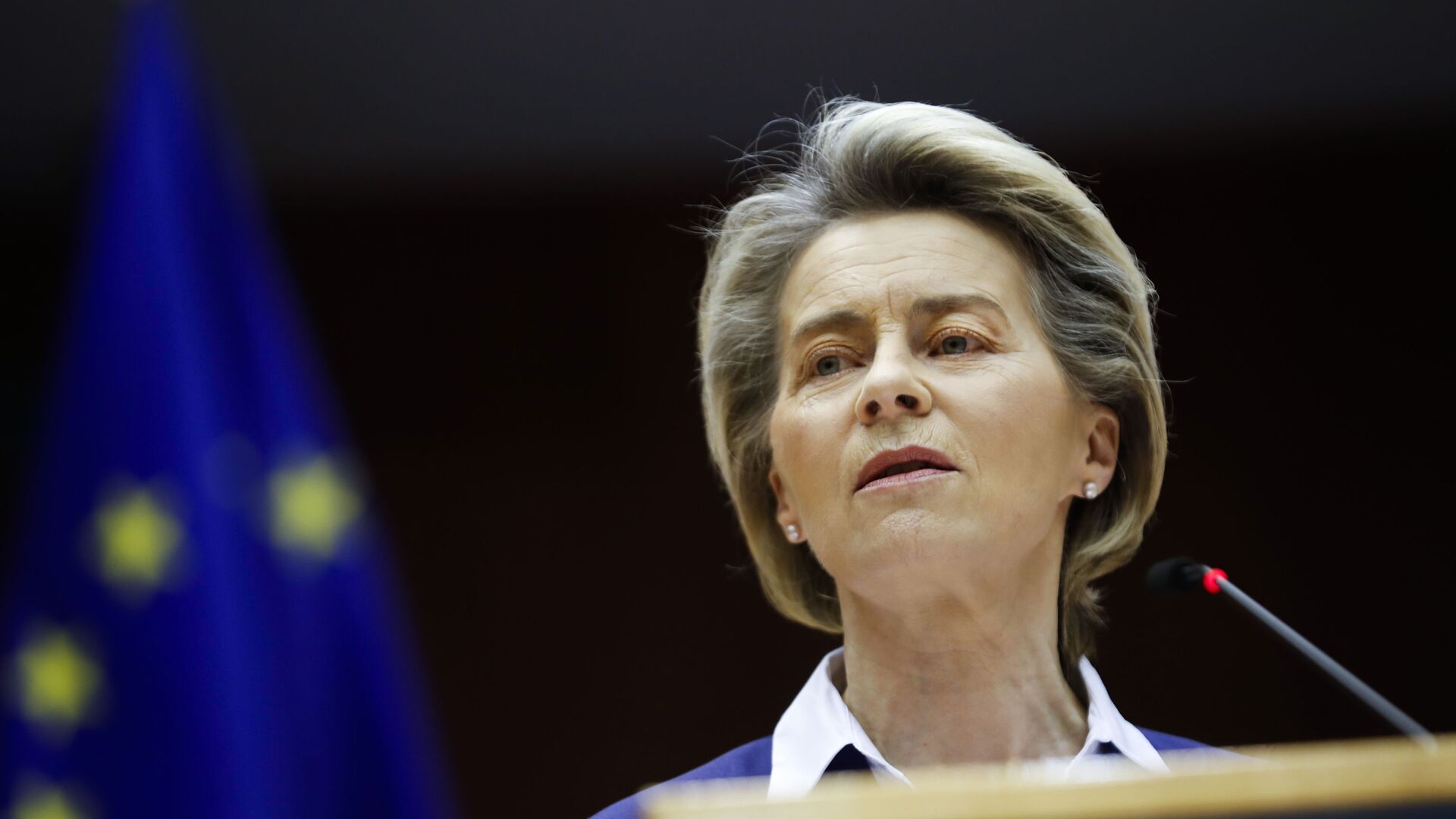 © AP Photo / Francisco Seco
Subscribe
Max Gorbachev
All materialsWrite to the author
Tensions have been running high between the two sides since the bloc’s officials criticised London for what they called a ban on the export of inoculations, a claim the UK categorically denied. Foreign Secretary Dominic Raab said Britain opposes vaccine nationalism in all its forms, emphasising the UK had not blocked the export of a single vaccine.

European Commission President Ursula von der Leyen said the bloc will halt exports of coronavirus vaccines to the United Kingdom unless London starts shipping inoculations to the bloc. "We want to see reciprocity and proportionality in exports and we are ready to use whatever tool we need to deliver on that. This is about making sure that Europe gets its fair share", she said.

Von der Leyen said the bloc had sent 10 million vaccine doses to Britain in recent weeks and emphasised that the UK has become the number one country in terms of the EU’s exports of inoculations. However, the bloc is still waiting for "doses to come from the UK".

"This is an invitation to reciprocity", the European Commission president said.

She then reminded Britain that Moderna and BioNTech/Pfizer were honouring their contract obligations, while British-Swedish company AstraZeneca was on course to deliver just 30 million of its promised 90 million doses in the first quarter of 2021.

The ongoing row between London and Brussels started due to the slow pace of the bloc's immunisation campaign, which has been affected by delays in production and shipments. The United Kingdom, meanwhile, is leading the rest of Europe in terms of total vaccinations. According to the UK government's website, almost 25 million people have received the first dose of the inoculation and 1.6 million have received two jabs.

Tensions escalated when AstraZeneca, which has production plants both in Britain and the EU, announced that it would postpone shipments of inoculations. Both the EU and UK had bought the inoculation, but the delays only affected the bloc.

To deal with the issue, the bloc introduced a law on 29 January that makes companies seek the EU’s approval before making shipments of vaccines to non-member states. Using this legislation, Brussels has blocked the delivery of 25,000 inoculations produced by AstraZeneca from Italy to Australia. This prompted accusations of "vaccine nationalism" against the European Union.

EU officials allege the United Kingdom has imposed an export ban on vaccines, a claim that London has categorically denied. However, according to Politico, when signing the contracts on the shipments of vaccines with AstraZeneca, the UK government ensured that the production plants in Britain would first supply its own citizens.

Darren McCaffrey, political editor at Euronews, said the slow pace of the EU’s immunisation programme should not be blamed on delays in vaccine shipments, but simply on the poor rollout. McCaffrey notes that some member states are sitting on millions of unused vaccine doses.

SHOULD BE NOTED: Higher vaccine rollout in other countries compared to EU NOT simply down to lack of supply

Some EU countries sitting on millions of unused vaccines!!! Some have only used 50% they currently have

And this before #AZ suspension

EU member states overall have used just 48 million doses out of the 62.2 million delivered to them

15 million #AstraZeneca vaccines have been delivered to EU member states yet less than half have been used!!!

​Ursula von der Leyen noted that if the supply situation doesn’t change, it will revise its policy on exports of inoculations.

"We will have to reflect on how to make exports to vaccine-producing countries dependent on their level of openness. And on whether exports to countries who have higher vaccination rates than us are still proportionate", she said.

Tom One
17 March, 21:19 GMT1
000000
Newsfeed
0
New firstOld first
loader
LIVE
Заголовок открываемого материала
Access to the chat has been blocked for violating the rules . You will be able to participate again through:∞. If you do not agree with the blocking, please use the feedback form
The discussion is closed. You can participate in the discussion within 24 hours after the publication of the article.
To participate in the discussion
log in or register
loader
Chats
Заголовок открываемого материала
Worldwide
InternationalEnglishEnglishMundoEspañolSpanish
Europe
DeutschlandDeutschGermanFranceFrançaisFrenchΕλλάδαΕλληνικάGreekItaliaItalianoItalianČeská republikaČeštinaCzechPolskaPolskiPolishСрбиjаСрпскиSerbianLatvijaLatviešuLatvianLietuvaLietuviųLithuanianMoldovaMoldoveneascăMoldavianБеларусьБеларускiBelarusian
Transcaucasia
ԱրմենիաՀայերենArmenianАҧсныАҧсышәалаAbkhazХуссар ИрыстонИронауОssetianსაქართველოქართულიGeorgianAzərbaycanАzərbaycancaAzerbaijani
Middle East
Sputnik عربيArabicArabicTürkiyeTürkçeTurkishSputnik ایرانPersianPersianSputnik افغانستانDariDari
Central Asia
ҚазақстанҚазақ тіліKazakhКыргызстанКыргызчаKyrgyzOʻzbekistonЎзбекчаUzbekТоҷикистонТоҷикӣTajik
East & Southeast Asia
Việt NamTiếng ViệtVietnamese日本日本語Japanese中国中文Chinese
South America
BrasilPortuguêsPortuguese
NewsfeedBreaking
17:32 GMTKorean Treat and Eurovision Winner Among Most Mispronounced Words of 2021
17:24 GMTWhitehall Union Claims Victory After Court Dismisses its Case Against Johnson and Patel
17:14 GMTPope Francis Stumbles on Airstair as He Boards Plane in Greece - Video
17:02 GMTTrump’s Social Media Listing Vehicle Says Under Inquiry From US Securities Investigators
16:47 GMTRussia, Egypt Start Naval Phase of 'Bridge of Friendship-2021' Drills in Mediterranean
16:40 GMTUS Reportedly Mulls Cutting Russia Off SWIFT, Sanctioning Energy Producers & 'Putin's Inner Circle'
16:37 GMTFinland’s PM Parties at Nightclub Until 4am After Contact With COVID-Positive Official
16:14 GMTSecond Week of Ghislaine Maxwell Sex Scandal Trial Kicks Off
15:56 GMTBoost for Britain! Is the UK’s COVID-19 Third Jab Campaign Saving Lives?
15:55 GMTWestminster Preparing 10-Year War on Drugs in Attempt to Defeat County Line Gangs
15:44 GMTIsrael Will Reportedly Push US to Strike Iranian Facility Amid Lack of Progress in Vienna Talks
15:41 GMTAmerica Unveils First-Ever Strategy to Battle Corruption at Home and Abroad
15:30 GMTChina May Build Military Base in Equatorial Guinea Amid Beijing’s Tensions With Washington
15:15 GMTKremlin: Putin Will Listen to Biden's Proposals on Ukraine 'With Great Interest'
15:15 GMTNYC to Use 'Preemptive Strike' Against Omicron With Vaccine Mandate for all Businesses, Mayor Says
15:08 GMT3,000 Security Officers Guard India's Mathura as Hindu Group Threatens to Install Idol in Mosque
14:59 GMTAmid Rumours of US Boycott of Beijing Olympics, How Could the Move Affect the Games?
14:52 GMTUK Policing Minister Not Surprised Over Reports of Drug Use in Parliament Building
14:45 GMTLabour Unions Protest in Brussels Against Low Wages, Expensive Electricity - Photos
14:26 GMTSpanish Court Rules Employee Can be Fired for Job Abandonment During Pandemic - Reports