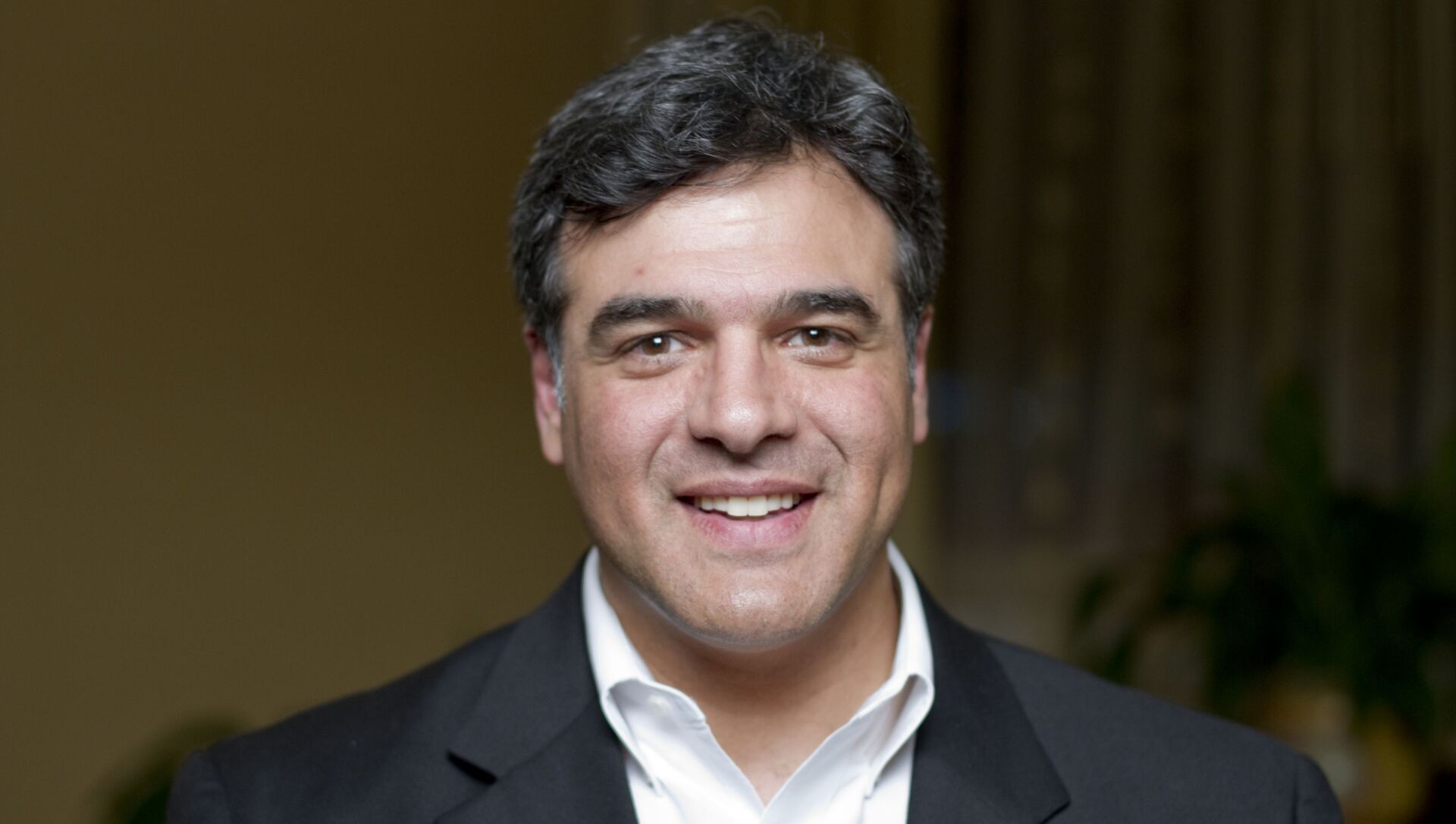 Mohamed Elmaazi
All materialsWrite to the author
WikiLeaks founder Julian Assange will face a system that is rigged by design before he ever sets foot in the court room, should he be extradited to the Unites States, CIA officer-turned-whistleblower John Kiriakou explains in an exclusive interview with Sputnik.

John Kiriakou is a former CIA counter-terrorism officer and former chief investigator for the US Senate Foreign Relations Committee. In an exclusive interview with Sputnik, Kiriakou explains how he faced decades in prison after being charged with Espionage Act offences following his revelations that the Bush administration was engaged in torture of terror suspects. Kiriakou, who co-hosts The Backstory on Sputnik radio in Washington DC, also said that he did not believe it was possible for WikiLeaks founder Julian Assange to receive a fair trial, as he would face a jury made up of members of the national security state, the military, or their family members.

Sputnik: Can you explain the events leading up to you being arrested and prosecuted by the US federal government?

John Kiriakou: The story of my arrest and prosecution has a bit of background. I was the chief of CIA counter-terrorism operations in Pakistan after the 9/11 attacks. And in that job, I led a series of raids that resulted in the capture of Abu Zubaydah, who we believed at the time was the number three in Al-Qaeda*. I returned to CIA headquarters after the capture of Abu Zubaydah who was sent to a secret prison. Once I got back to headquarters, I was asked if I wanted to be trained in, what they called, the use of enhanced interrogation techniques. I had never heard that term before, and I asked what it meant. It was, I was told, that we were going to start getting rough with our prisoners. I asked what that meant. My colleague explained these 10 techniques that were going to be used against Abu Zubaydah and other prisoners.

Espionage Charges Against Assange 'An Abuse of the Criminal Law Enforcement Power': Defence Expert
I told him that it sounded like a torture programme to me, and that I had a moral and ethical problem with it. That was on May the sixth, 2002. On August 1st, 2002, the CIA began to torture Abu Zubaydah and they used techniques that actually had not been approved by the US Justice Department and by the White House. Besides waterboarding, which everybody has heard about, there were unspeakable crimes committed against Abu Zubaydah: mock executions, sleep deprivation —as long as 12 days. They put him in a coffin for two weeks wearing only a diaper. And knowing that he had an irrational fear of insects, they dropped a box of cockroaches in the coffin with him, all different kinds of things.

I kept waiting for somebody to say something. I kept waiting for somebody to go public, because, certainly behind the scenes people were complaining about this and saying ‘this programme is illegal’. It's unethical. And people actually resigned from the CIA rather than to participate. And so naturally I thought, well, certainly somebody is going to say something and the programme is going to be halted. That didn't happen.

In 2004, I resigned from the CIA, still waiting for somebody to say something. And finally, in December of 2007, more than five years after Abu Zubaydah was tortured, I decided to say something. And so, in response to a reporter's request, I gave an interview on ABC news here in the United States, nationally televised interview, in which I said three things. I said that the CIA was torturing its prisoners. It was not the result of a rogue operation, as President Bush had insisted. And I said that the torture program had been personally approved by the president himself.

Within 24 hours, the CIA filed something called "a crimes report" against me with the Justice Department, alleging that I had revealed classified information. The FBI investigated me for a full year from December of 2007 until December of 2008. And then they sent my attorneys what's called a declination letter, declining to prosecute me. They said that they had found that my revelation was not classified and besides it's illegal to classify a crime —and I believed torture was a crime — but the FBI declined to prosecute me. And they ended the investigation.

Charges Against Julian Assange Are 'Unconstitutional' And Threaten Press Freedom, Expert Tells Court
What I did not know was that three weeks later, when Barack Obama became president, John Brennan —who is an old nemesis of mine and became Obama's Deputy National Security Advisor— asked the Justice Department to secretly reopen the case against me. I had no idea that my phones were being tapped, my emails were being intercepted, that there were teams of FBI agents conducting surveillance on me. And that lasted for three years until January of 2012.

And then in January, I was arrested and charged with five felonies, including three counts of espionage, one count of violating the Intelligence Identities Protection Act of 1982, and one count of making a false statement. Of course, I hadn't committed espionage. That was ludicrous. And eventually, those charges were dropped. I ended up taking a plea to violating the Intelligence Identities Protection Act in exchange for a sentence of 30 months in prison, where I would do 23 months rather than face 45 years. I have five kids at home. It was an easy decision.

So, they do that because the jury pool is such that jurors will be either employees of, or relatives or friends of employees of, the CIA, the FBI, the Department of Defense, the Department of Homeland Security, intelligence community contractors. It's almost impossible to find a jury that's truly independent. And it's because these people have to live somewhere and their jobs are based in Northern Virginia. So, they tend to live in Northern Virginia.

Sputnik: What can Julian Assange expect were he to be extradited to the United States and tried under the Espionage Act in the Eastern district of Virginia?

John Kiriakou: I don't believe that it's possible for Julian Assange to receive a fair trial in the Eastern District of Virginia. The judges are very conservative. As I mentioned, the juries tend to be very conservative. There's an old saying that in the Eastern District of Virginia, a ham sandwich would be indicted and convicted if it were to be charged with a crime. You know, in my own case, I hired a jury consultant. I hired OJ Simpson's jury consultant. And he flew up from Texas. He got a security clearance from the Justice Department and went through all 15,000 pages of discovery. And after he did all that, we met with all the attorneys - I had 11 attorneys in my case -  and he said to me, ‘if we were in any other district in America, we would win this thing. If we were in any other district in America, I would say, let's go for it. We're going to get a good jury and we're going to win this thing. But the Eastern District of Virginia', he said, 'you don't have a chance. Take the deal’.

Julian Assange is in an even more precarious position because so many people have already made up their minds about Julian. He's received so much press. He's a foreign national accused of espionage. He's being charged in the espionage court, in the Eastern District. I just don't see how it's possible that Julian Assange can receive a fair trial.

Sputnik: In her decision refusing Julian Assange's extradition, the judge actually found in favour of the majority of the US government's arguments. Among them was that Julian Assange could expect a fair trial in respect of the jury composition. In her judgement, District Judge Vanessa Baraitser said that as US federal prosecutor Gordon Kromberg pointed out, "there are 1,100,000 people living in Fairfax county alone, and the jury could be drawn from any of the six counties. Given this large pool of potential jurors, the suggestion that twelve impartial individuals could not be empanelled is hard to sustain".

She continued "No juror will be qualified to serve unless the presiding judge is satisfied that he or she is able to put aside any previously formed opinions or impressions, is prepared to pay careful and close attention to the evidence, and is able to render a fair and impartial verdict, based solely on the evidence”. How do you respond to Judge Baraitser's conclusions in this respect? Does she have a point?

Judge's Decision in Assange Case 'Casts a Shadow Over Investigative Journalism', Critics Warn
Let me ask you a question. When former CIA director David Petraeus was charged the national security crimes, he was not charged in the Eastern district of Virginia. He was charged in the Western District of North Carolina. And after he pleaded guilty to illegally disclosing classified information to his adulterous girlfriend and accepted a misdemeanour punishment of 11 months of unsupervised release, the judge came down from the bench to shake his hand and to thank him for his service to the country.

Why wasn't he charged in the Eastern District of Virginia? The answer is because the fix was in and had he been charged [there] he would have been convicted of a more serious crime. They didn't want him to be convicted of a more serious crime. They wanted to go through the motions to make it look like the judicial system is blind. Well, it's not blind. And even the prosecution knew that. And that's why David Petraeus was not charged in the Eastern District of Virginia, and Julian Assange was charged in the Eastern of Virginia. So, the judge can talk all she wants about the honesty and integrity of the jury pool in Northern Virginia. I don't believe it for a second.

Sputnik: John Kiriakou thank you for joining us on Sputnik.

John Kiriakou: Thanks for having me.

* This interview has been edited for clarity and concision.