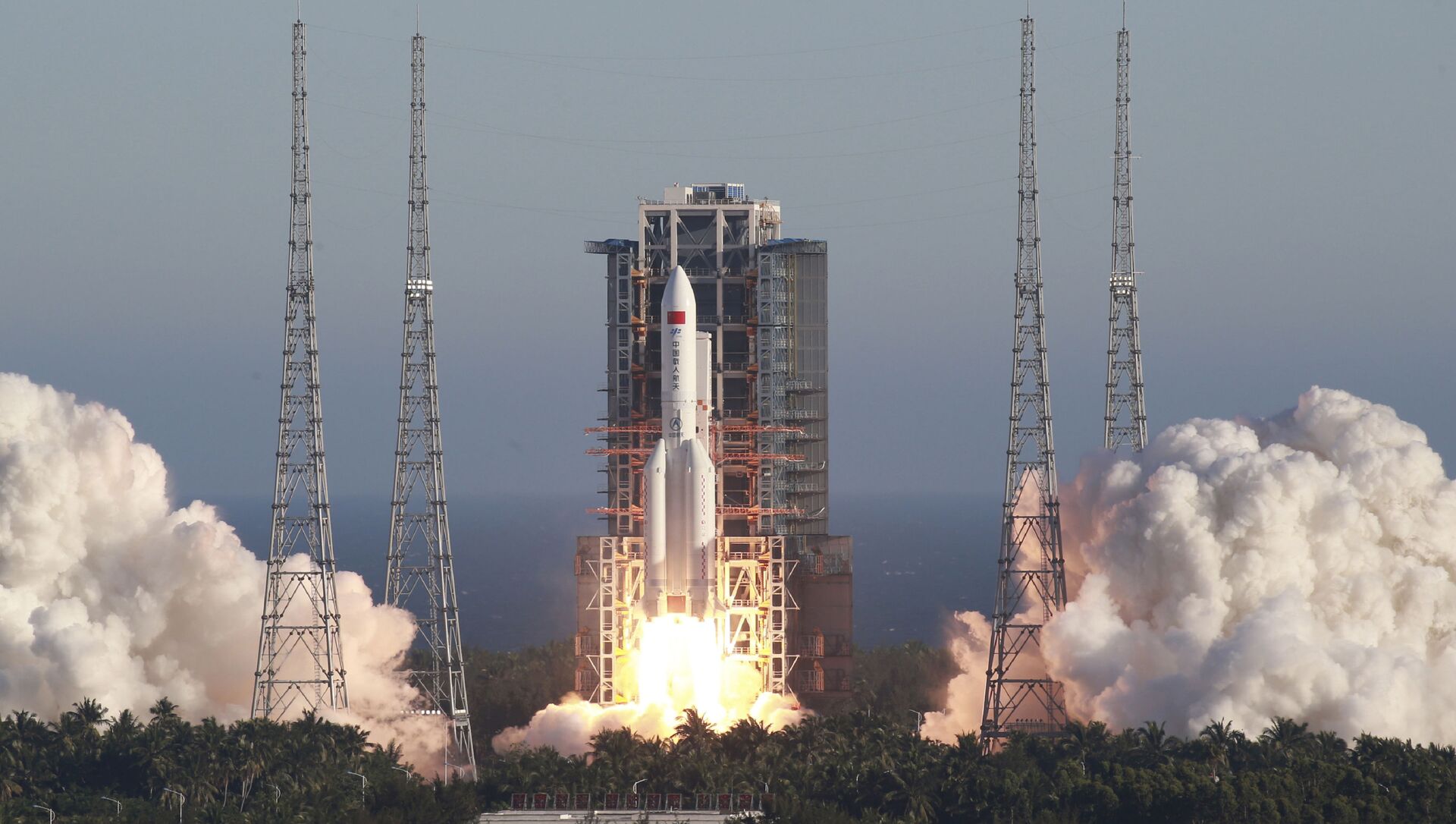 © AP Photo / Tu Haichao
Subscribe
A life support system to be loaded onboard lays the foundation for manned space missions.

As China has scheduled 11 launch missions in the next two years for the building of its first space station, a private space technology start-up based in Huzhou, East China's Zhejiang Province has been keeping its pace close to the national program, with an ambitious goal of initiating an orbital space biology lab around 2025, firm founder Cheng Wei told the Global Times on Sunday.

It aims to conduct studies relating to changes in humans' vital signs in space to explore the development of future manned space missions, while also planning to load a self-generating life support system onboard its lab to study the feasibility of long-term human stays on the moon or other extraterrestrial bodies.

Named after rocket plus the Greek symbol representing the ratio of the circumference of a circle to its diameter, Cheng's firm, Rocket Pi, has a four-step framework toward its ambitious goals.

A single-function biology experiment platform payload, Sparkle-1, is expected to be launched via a Long March carrier rocket by September, while a multi-functional platform supporting biological experiments may be put into orbit by 2022. The company will establish a space shuttle-like mode for platform launches during the same period. 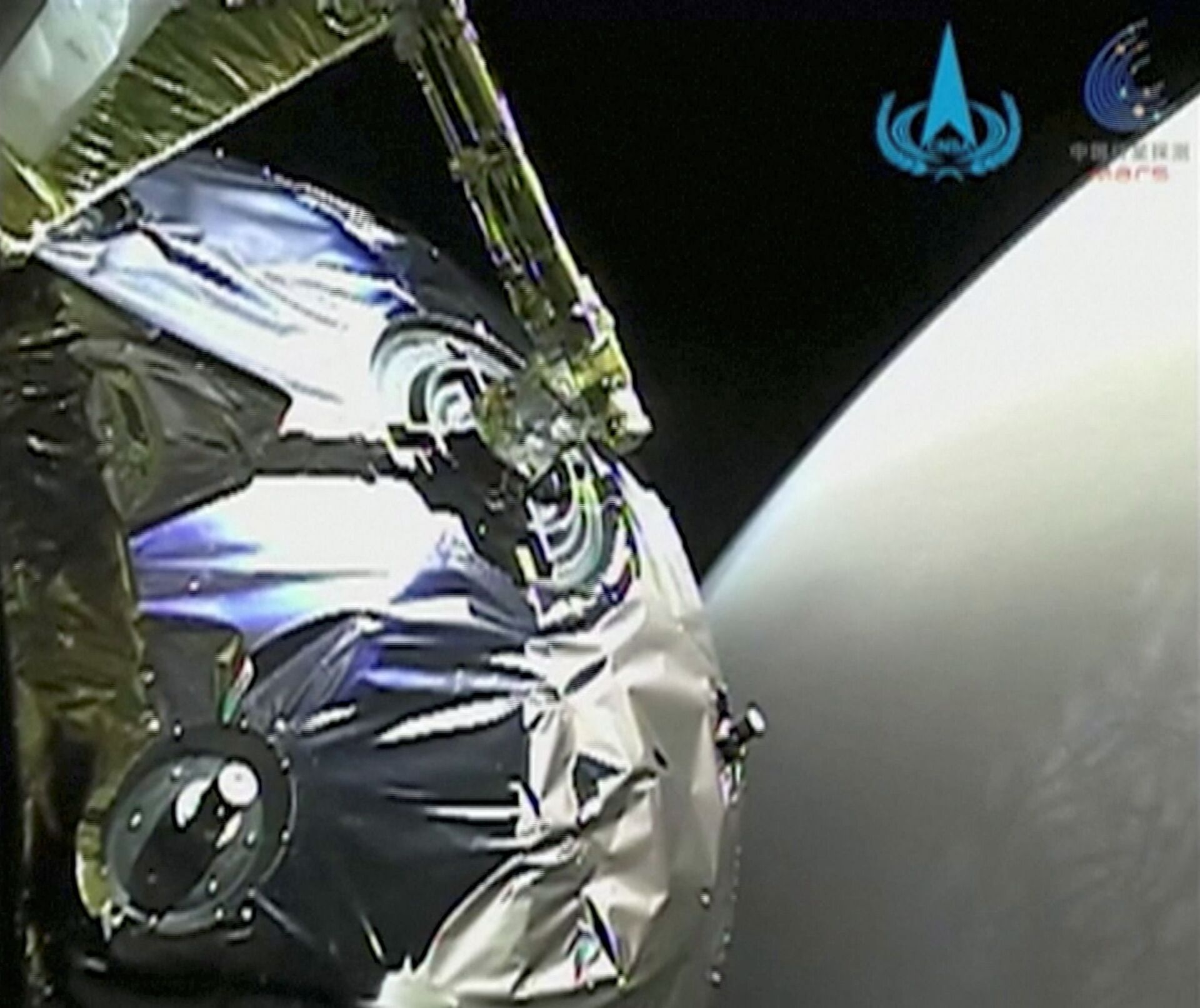 A view as Tianwen-1 probe enters the orbit of Mars in this screen grab obtained from a video on February 12, 2021
© REUTERS / CHINA NATIONAL SPACE ADMINISTRAT

Next, by 2025, a reusable payload that is able to shuttle between Earth and celestial bodies will become reality, which will provide platforms for in-orbit experiments for biopharmaceutical studies.

The company aims to launch a program to build the space biology lab after 2025.

Against the backdrop of China putting the construction of a space station, which is expected to become operational by 2022, Rocket Pi aims to conduct studies relating to changes in human vital signs in space to explore and support the development of future manned space activities.

According to material that the company provided to the Global Times, its spacecraft will be very much like China's manned Tiangong-2 space lab, which successfully left orbit and re-entered the atmosphere in July 2019 in a controlled manner after more than 1,000 days in service, with a small amount of debris falling into a designated security area in the South Pacific Ocean. Most of the spacecraft burned up in the atmosphere.

A bioregenerative life support system (BLSS), Yuegong-1 or Lunar Palace, is likely to be loaded onto the space lab, Cheng told the Global Times on Sunday, where it will study the feasibility of long-term human stays on the moon or other extraterrestrial bodies.

"The moon lab project simulates a lunar base where humans, animals, plants and microorganisms co-exist in a closed cabin. Oxygen, water and food are recycled within the lab, creating an Earth-like environment", said chief designer Liu Hong.

During an experiment in 2017-2018, eight volunteers took turns living in the 150-square-meter cabin for 370 days, during which time researchers evaluated their physical and mental conditions.

Currently, smaller BLSS equipment is being studied, which could be loaded onto space labs, as well as the moon and Mars probes, in the future.

According to Cheng, Rocket Pi also plans to launch its first liquid-fuel carrier rocket codenamed Darwin-1 by the end of 2022. The company is also developing a wide range of launch vehicles, adopting 10-ton and 65-ton liquid oxygen methane engines, to support launches for various payloads of different weights. 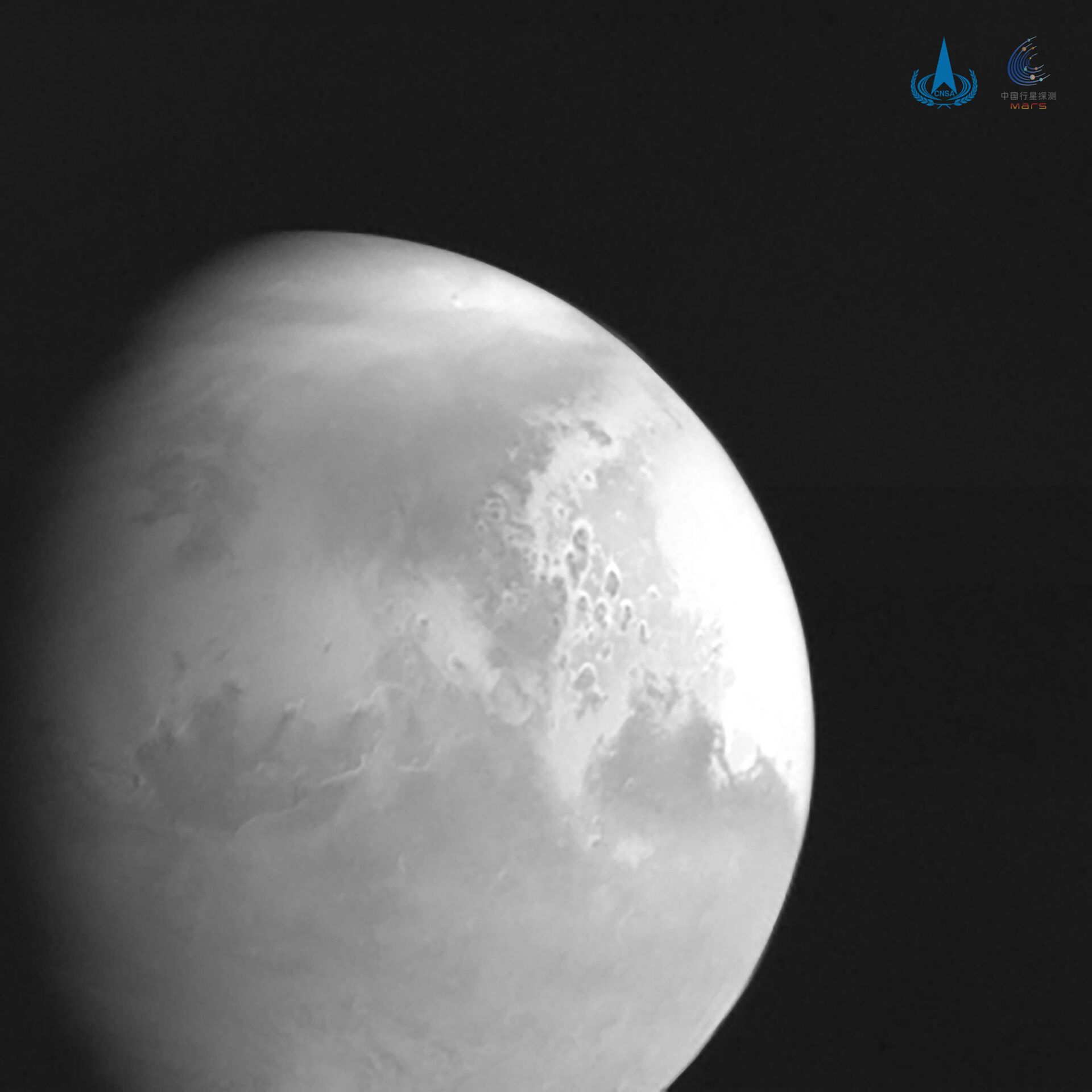 Darwin-1 will be 24.1 meters high with a 2.25-meter diameter, and a launch weight of 42.52 tons. The 500 kilo Newton thrust rocket is capable of sending a payload of 270 kilograms into Low Earth Orbit and the 150-kilogram payload into a sun-synchronous orbit.

Cheng said that the role of rockets will drastically transform the future of space exploration, from launch vehicles to a  means of transport, to support a range of new space infrastructure programs including space labs and satellite-based internet networks.

In addition, such more flexible, reusable rockets and the space lab could become a platform for space microbial pharmacy research.

By probing the changes of microorganisms in space conditions, bioengineering can be applied to a range of products such as the development of vaccines, Zhuang Fengyuan, an academician of the International Academy of Astronautics, told the Global Times on Sunday.

"With the rise of a commercial aerospace industry, China is about to usher in a rapid development phase for large-scale biotechnology experiments and applications of biological payloads", noted Zhuang.

Andrew Jones, a Finland-based journalist for spacenews.com who has been closely following China's space program, wrote on Sunday that although it remains "still very early days," the company's goal of building a "space biology laboratory" to provide commercial space technology products and services for the biomedical industry "would be something if we start seeing an Earth-moon space economy".

Andrews noted that such a development would suggest China is looking at encouraging or allowing commercial space activities beyond LEO. 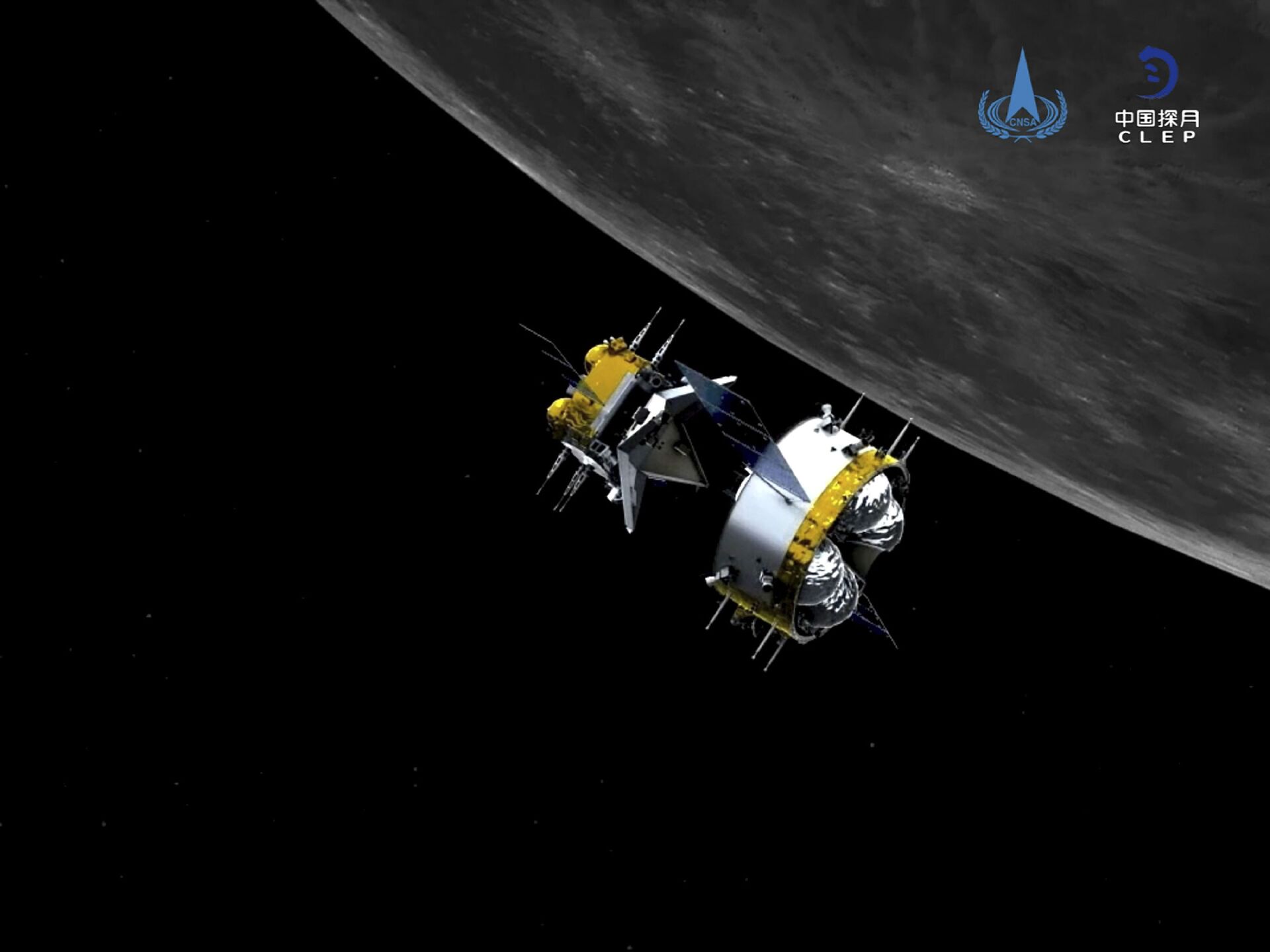 This graphic simulation image provided by China National Space Administration shows the orbiter and returner combination of China's Chang'e-5 probe after its separation from the ascender, at the Beijing Aerospace Control Center (BACC) in Beijing Sunday, Dec. 6, 2020. The Chinese probe that landed on the moon transferred rocks to an orbiter Sunday in preparation for returning samples of the lunar surface to Earth for the first time in almost 45 years, the country's space agency announced.
© AP Photo / China National Space Administration / Xinhua

China has been reportedly considering the establishment of an Earth-moon space economic zone by 2050, with insiders expecting the zone to generate $10 trillion a year.

He pledged to complete basic research and make a breakthrough on key technologies before 2030 and establish the transportation system by 2040. By 2050, China could establish an Earth-moon space economic zone, he said.