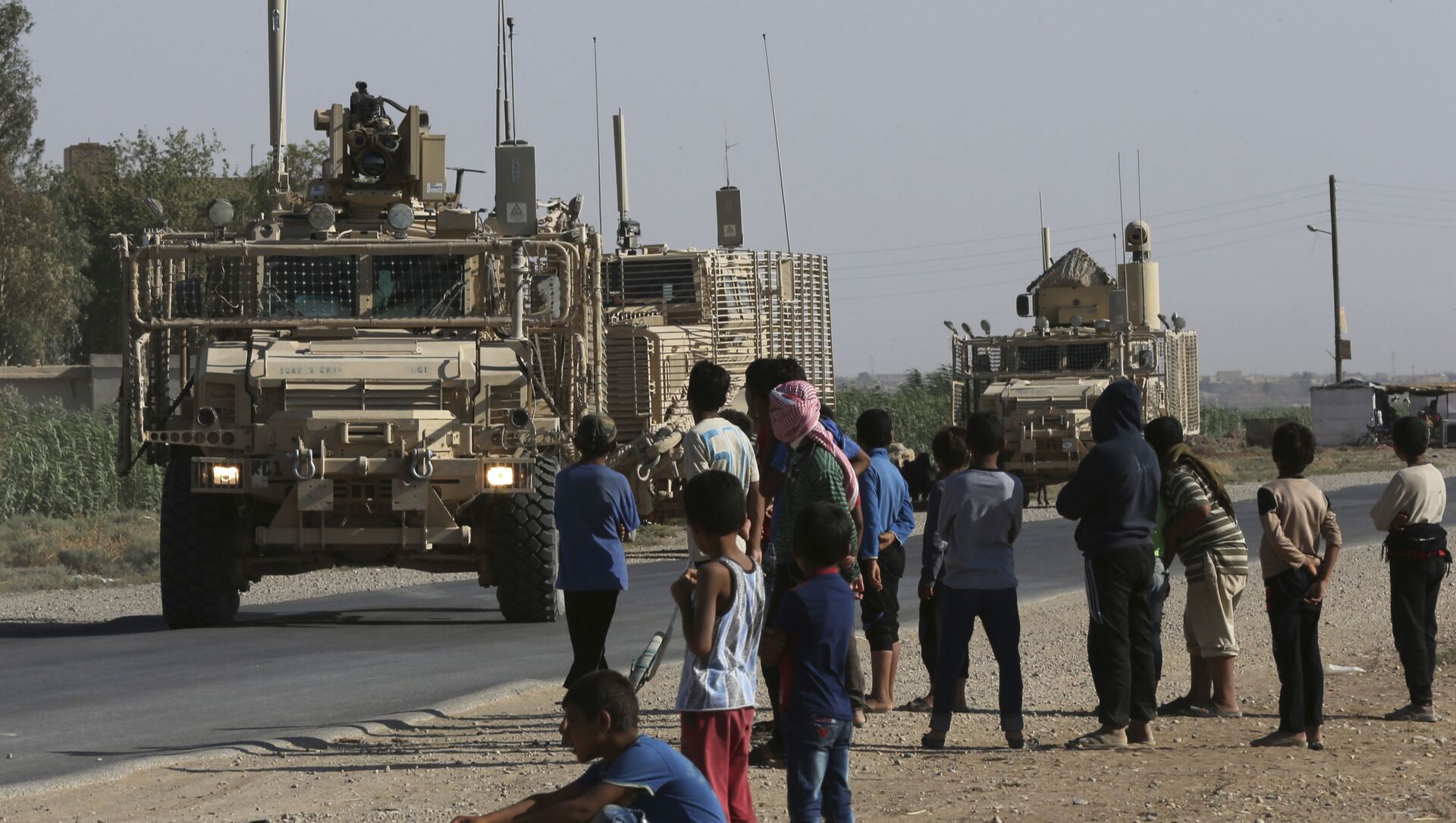 Ilya Tsukanov
All materialsWrite to the author
The Biden administration has continued its predecessor’s policy of sending convoys filled with military equipment and supplies into Syria, and of smuggling oil out. However, Pentagon officials now deny that US military personnel or contractors are involved in any oil-siphoning activities.

A convoy of 45 trucks carrying military vehicles, equipment, and supplies flanked by fuel tankers has been sent into northeastern Syria by the US-led military coalition, the Syrian Arab News Agency reports, citing local sources in the village of al-Khazna.

The convoy is said to have entered the country through the al-Walid border crossing point with Iraq, which the Syrian government does not have any control over and therefore deems illegal, before crossing the M4 highway on route to destinations in Deir ez-Zor and Hasakah.

SANA says the US coalition has continued to strengthen its illegal presence in northeastern Syria, establishing multiple bases to protect and train allied forces “and terrorist organisations operating under their command,” and to guard oil fields extracting resources and shipping them abroad.

The Pentagon justifies the deployment of US forces in Syria by saying they’re there to ensure the “enduring defeat” of the Daesh (ISIS)* terrorists. The former Daesh "caliphate" was formally routed by both Syrian and Iraqi forces by 2017, with Washington continuing to use the supposed threat of the group’s reemergence as justification for its continued presence in both countries.

Damascus says the US occupation is illegal and accuses America of seeking to plunder its oil. During his presidency, President Donald Trump openly and repeatedly admitted that “the only forces” he had in Syria were there to “take the oil.” The Biden administration has walked back from this rhetoric, announcing last month that the estimated 800 US troops stationed in Syria were “not authorised to provide assistance to any other private company” engaged in the exploitation of the country’s oil fields.

Russian military intelligence has estimated that the US and their allies plunder at least $30 million in oil from the remnants of local oil infrastructure every month, thus preventing these funds from being collected by their rightful owners in Damascus and used for reconstruction from the deadly foreign-backed civil conflict. The US presence in Syria is not supported by any UN Security Council mandates, and Washington does not have an invitation from the country’s government to operate in Arab Republic.

Israel Targeted Multiple Iranian Ships Bound to Syria, Report Claims
Despite committing to reverse course on much of its predecessor’s foreign and domestic policy, the Biden administration has continued Trump’s policy in Syria, with local Syrian media regularly reporting on the back and forth shuttling of military vehicles, supply convoys and tankers into and out of the country. In January, it was reported that 200 additional US troops had been transferred into Hasakah. President Biden launched airstrikes against Syria in February, targeting Iraqi anti-Daesh militia forces Washington claimed were involved in attacks against US forces in Iraq. Syria denounced the aggression, and the militias denied claims of involvement.

Biden has consistently been a proponent of US intervention in Syria, cheerleading Operation Timber Sycamore, an Obama-era classified CIA weapons and training programme begun in 2012 which saw the US and its allies ship thousands of tonnes of weapons and billions of dollars to "moderate rebels" which media investigations later revealed were allied to the jihadists. In 2019, when Trump announced his (later scrapped) plans to pull troops out of Syria completely, Biden called him a “complete failure as a commander in chief” and suggested that his “reckless” and “dangerous” policy was “demoralising...our troops.”

* Terrorist group outlawed in Russia and may other countries.