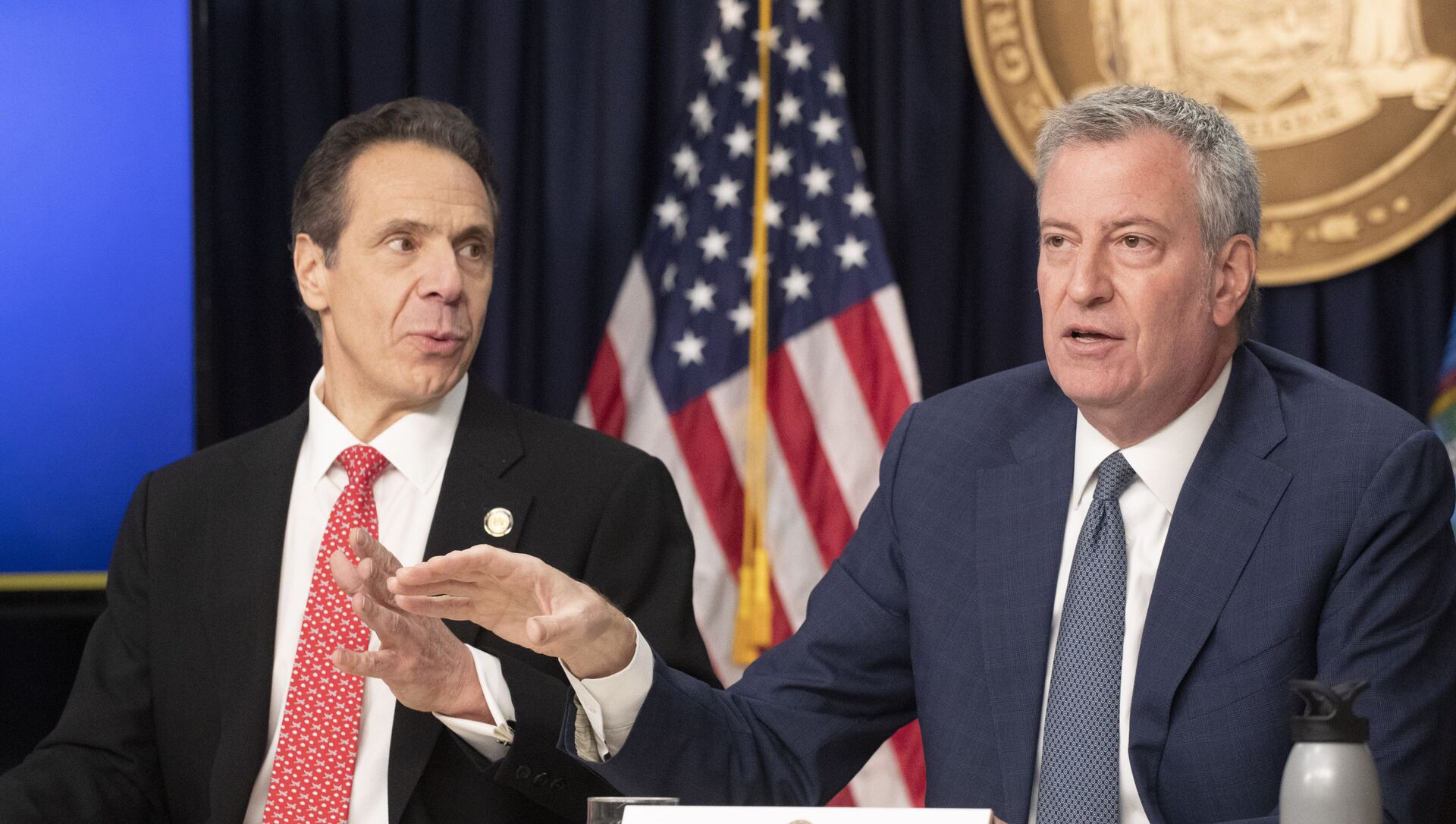 Ilya Tsukanov
All materialsWrite to the author
Governor Andrew Cuomo continues to insist he “never abused, harassed, or assaulted anyone,” even as a seventh accuser has come forward charging him with sexual misconduct. Along with the misconduct claims, he faces questions over whether his policies may have caused thousands of needless Covid deaths in New York State’s nursing homes.

New York City Mayor Bill de Blasio has attacked Governor Andrew Cuomo over his continued refusal to step down amid the snowballing accusations against him.

“The folks in this state and the political leadership don’t believe him anymore. He doesn’t have any credibility. So I think an impeachment proceeding will begin, and I think he will be impeached and perhaps right before that he’ll decide to resign,” de Blasio said, speaking to CBS News on Sunday morning.

“But I’ve got to tell you something. He should resign right now because he’s holding up our effort to fight COVID. He’s literally in the way of us saving lives right now,” the mayor added.

De Blasio went on to attack Cuomo’s record on the coronavirus. The mayor boasted that he was one of the first officials to shut down schools, bars and restaurants and to call for lockdowns. “I called for shelter-in-place, one of the first, and unfortunately, my state government wouldn’t agree to it. In fact, Governor Cuomo said shelter-in-place would be imprisoning New Yorkers. And that’s a lost opportunity.”

Asked to comment on the nursing home scandal - the alleged effort by New York State officials to undercount care home fatalities by as much as 50 percent after implementing a policy to reintroduce Covid-positive patients back into nursing homes, de Blasio said he didn’t have a doubt in his mind that the governor deliberately tried to cover up the real death toll.

Potential Impeachment Scenario of NY Gov. Andrew Cuomo Following Sexual Misconduct Allegations
De Blasio and Cuomo fought a years’ long feud over issues centered around subway funding, the minimum wage, charter schools and taxes. However, for much of last year, they sought to present a united front, and to instead focused their energies attacking President Donald Trump’s pandemic response.

In recent weeks, however, as allegations of sexual misconduct piled up against Cuomo, de Blasio went back on the attack against his fellow Democrat, suggesting last week that he “can no longer serve as governor” and that the allegations were “absolutely unacceptable” and “disgusting.”

Cuomo went on a counteroffensive against his detractors on Friday, denying everything and taking a shot at those attacking him by saying that “politicians who don’t know a single fact but yet form a conclusion and an opinion” were “reckless and dangerous.” He went on to suggest that office-holders often take positions for reasons including political expediency and bowing to “cancel culture.”

On Thursday, the New York State Assembly authorized the judiciary committee to investigate the sexual misconduct allegations against Cuomo, with a total of seven women now coming forward with allegations ranging from inappropriate remarks to unwanted touching and kissing.

Along with de Blasio, other senior Democrats, including Senate Majority Leader and New York Senator Chuck Schumer, and New York's other senator, Kirsten Gillibrand, have also come out calling on Cuomo to step down. On Friday, Biden Press Secretary Jen Psaki said the Oval Office would wait for the results of New York Attorney General Letitia James’ investigation before weighing in.

James’ probe is expected to examine both the sexual misconduct claims and the nursing home allegations.