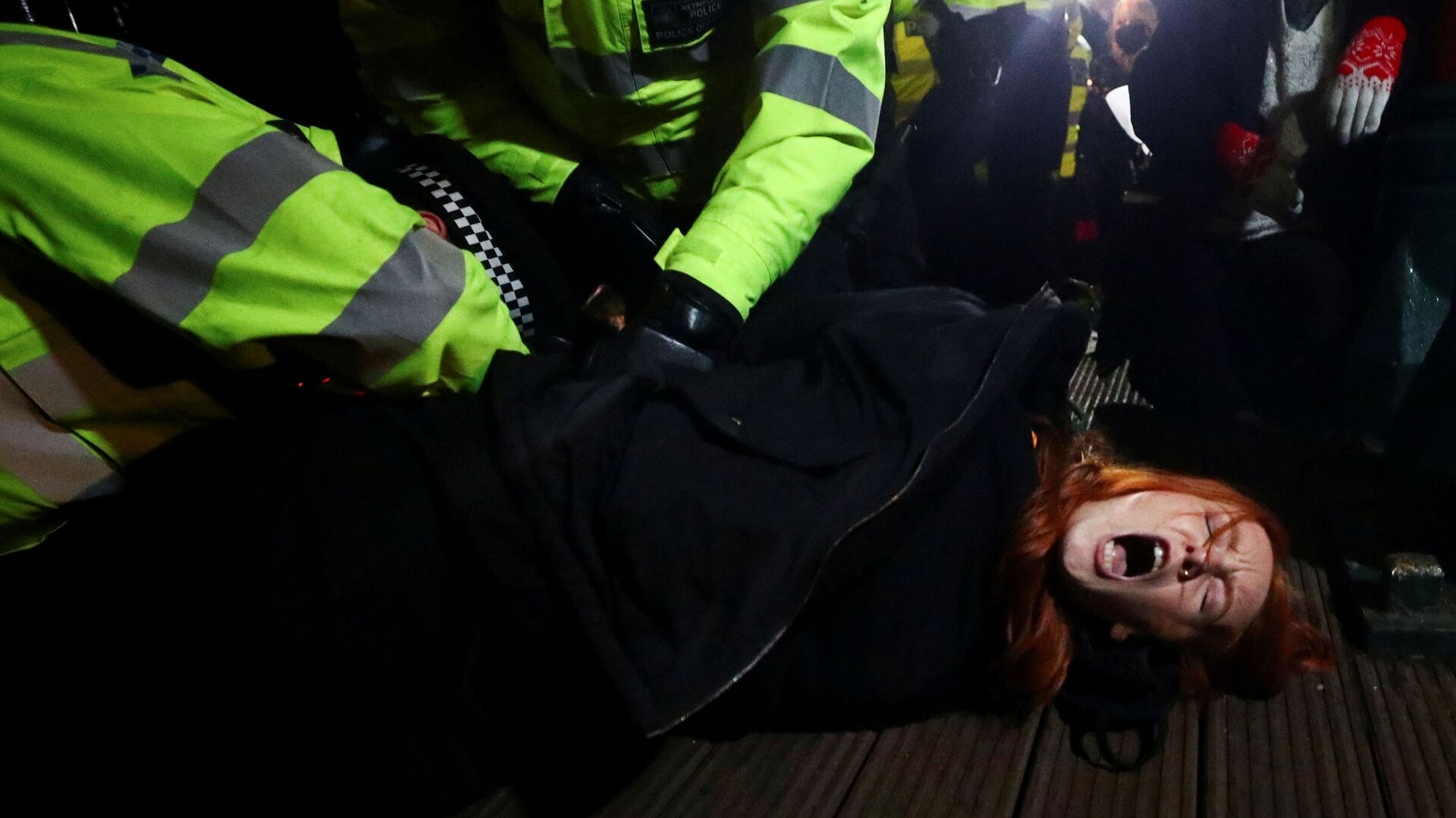 © REUTERS / Hannah Mckay
Subscribe
Maxim Minaev
All materialsWrite to the author
On Saturday, about a thousand Londoners, mostly women, gathered in the southwest of the British capital to honour the memory of 33-year-old Sarah Everard, who disappeared on 3 March while on her way home. A police officer who is suspected of her murder was brought to trial on 13 March.

The Metropolitan Police is facing severe criticism for its handling of a vigil in memory of Sarah Everard; many are calling for London Police Commissioner Dame Cressida Dick's resignation.

Clashes broke out at the vigil as officers told participants to go home, police officers were seen grabbing hold of several women and leading them away in handcuffs.

There aren’t words for how despicable this is
pic.twitter.com/I9lwDEkt00

In videos that emerged online, police officers can be seen wringing the hands of several protesters in order to handcuff them.

The Clapham Common vigil for #SarahEverard was peaceful until the police arrived.

The police were the violent ones. pic.twitter.com/QGdCsdXNjB

​The police initially denied the organising of a vigil in memory of Sarah Everard, citing anti-COVID-19 restrictions in explaining their reasoning behind the refusal.

Women being snatched by police at the vigil for Sarah Everard. Shameful, shameful scenes. pic.twitter.com/fyUqcfCyug

​But people gathered with banners "Shame on you!", "Arrest yourself!" and "She just walked home."

anti lockdown protest vs vigil for sarah everard, but the police are good guys! pic.twitter.com/1X6Atd7Xgk

Left Sarah Everard vigil before it kicked off but tension was already rising & u felt like police were gearing up for some shoving/grabbing. It breaks my heart to think of all the beautifully laid out flowers & candles that may have been trampled on. Rest in peace Sarah 💐🌹❣️ pic.twitter.com/QhERKGQvEd

​Labour leader Keir Starmer called the videos that emerged on social media "deeply concerning", and Interior Minister Priti Patel said she would like to hear from the police about the matter.

In turn, London Mayor Sadiq Khan said the officers' response was "neither appropriate nor proportionate". He added that he would demand an explanation from Scotland Yard.

The “Reclaim These Streets” vigil in London was prompted by the murder of 33-year-old Sarah Everard, in which a Scotland Yard employee is the prime suspect. The kidnapping and murder of a woman last seen in the vicinity of Clapham Common has sparked widespread controversy in the UK about the safety of city streets and the need to combat violence against women.