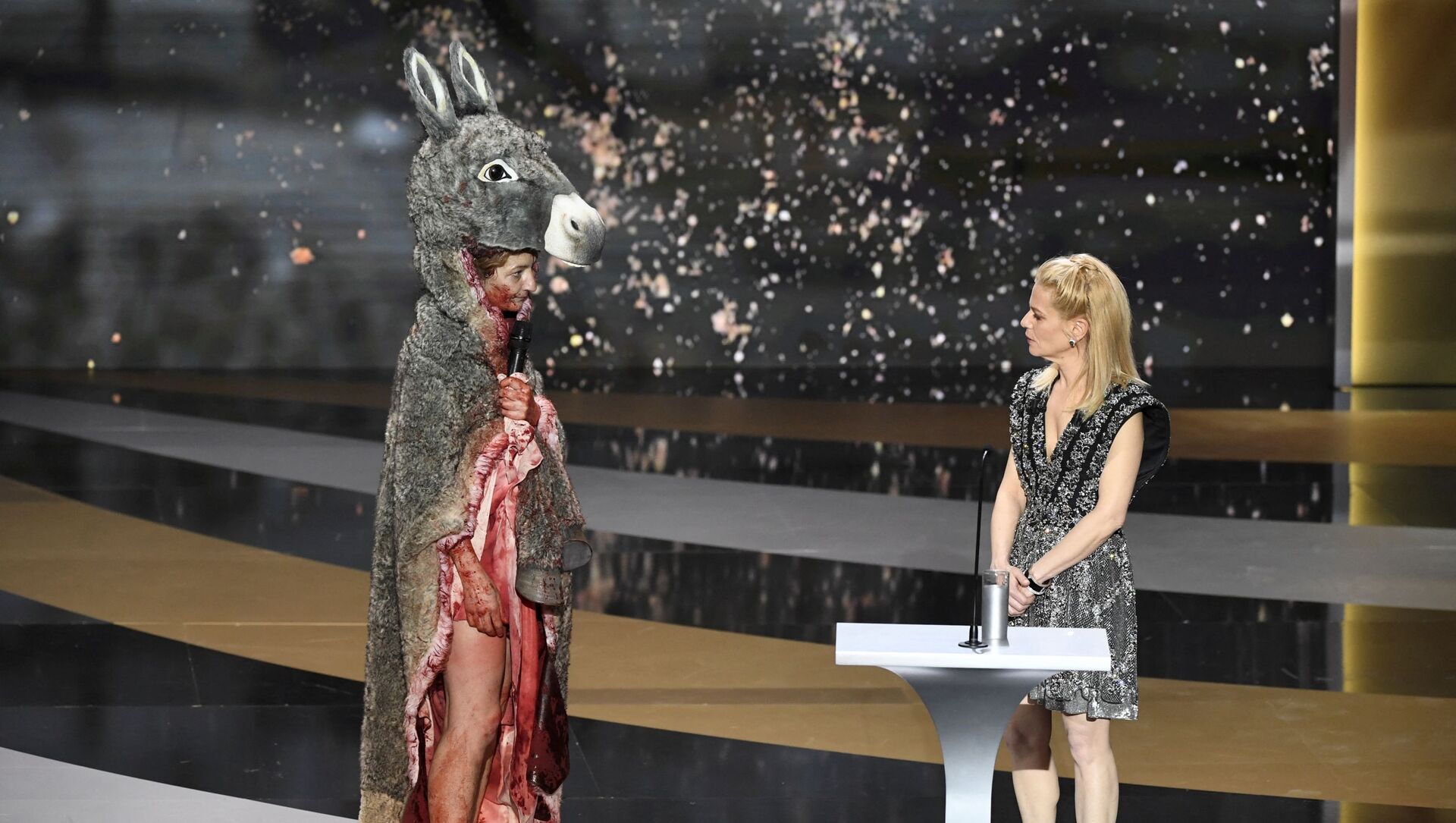 Aleksandra Serebriakova
Sputnik correspondent specializing in foreign affairs.
All materialsWrite to the author
Actors, musicians, and ordinary citizens have continued their demonstrations across France to demand the government to re-open theatres, museums and other cultural venues that have remained closed for months over COVID health crisis.

French actress Corinne Masiero dropped some jaws on Friday during the César Awards when she emerged completely naked on stage in support of national artists and cultural workers who have been impacted by the government’s response to the pandemic.

Masiero, who was presenting the award for best costumes, has already raised some eyebrows when she appeared on stage in a donkey costume – apparently in reference to Catherine Denueve’s character in ‘Donkey Skin’ – and then ditched it to turn up in nothing but a dress stained with fake blood.

“I have a last costume and after that’s there’s nothing more,” the 57-year-old actress warned before she let the dress go and got stark-naked in front of an audience of flabbergasted French celebs. 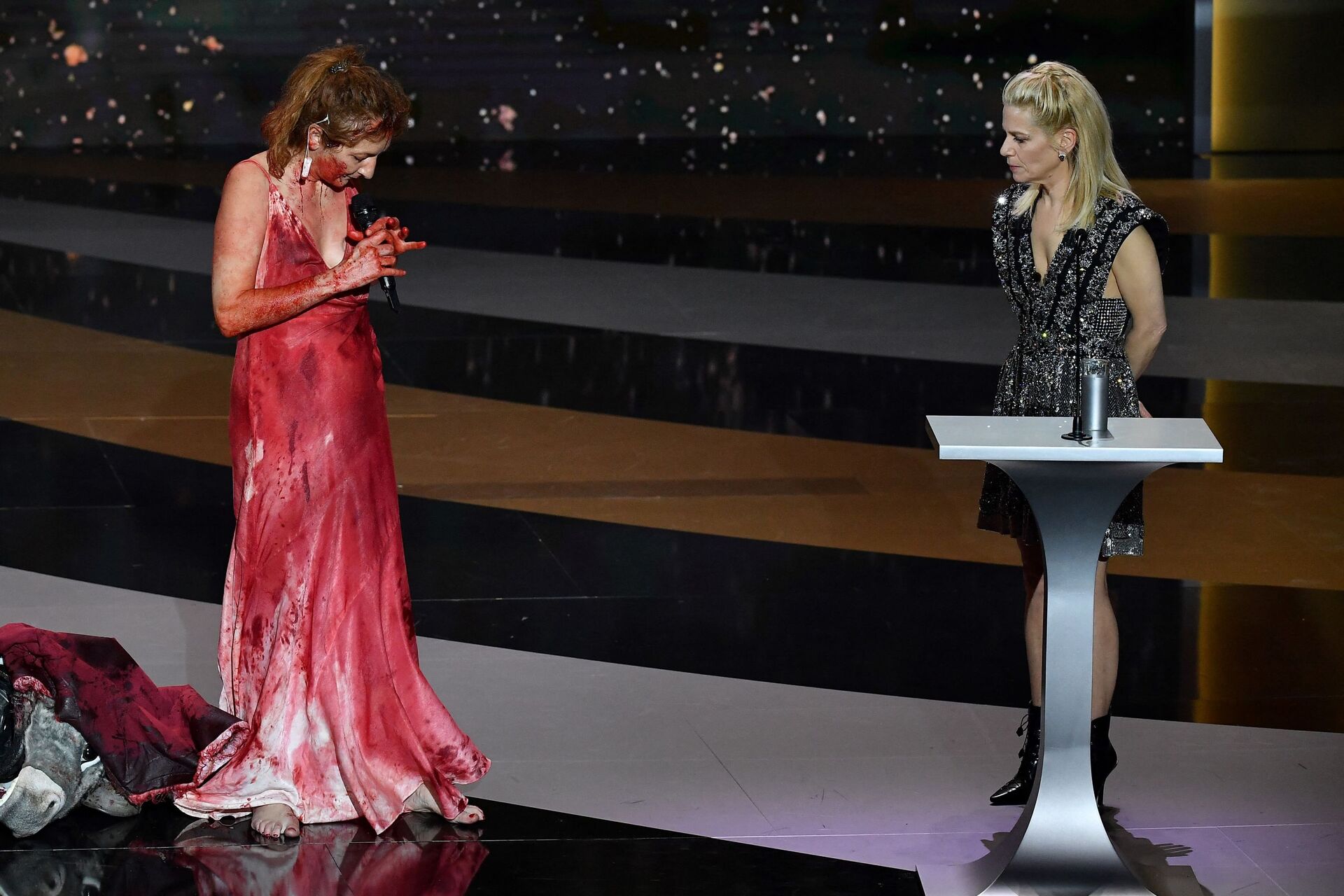 French actress Corinne Masiero (L) delivers a speech wearing a "Peau d'Ane" costume next to French actress and Master of Ceremony Marina Fois during the 46th edition of the Cesar Film Awards ceremony at The Olympia concert venue in Paris on March 12, 2021
© AFP 2023 / DOMINIQUE CHARRIAU

“This one is ‘Who Wants The Skin Of Roger L’Intermittant’,” Masiero said, playing with the title of “Who Framed Roger Rabbit” by combining it with the nickname locally used to describe art workers.

Her torso was inscribed with the words “No culture, no future", while the one on her back stated “Give us back art, Jean” in a purported appeal to French Prime Minister Jean Castex. 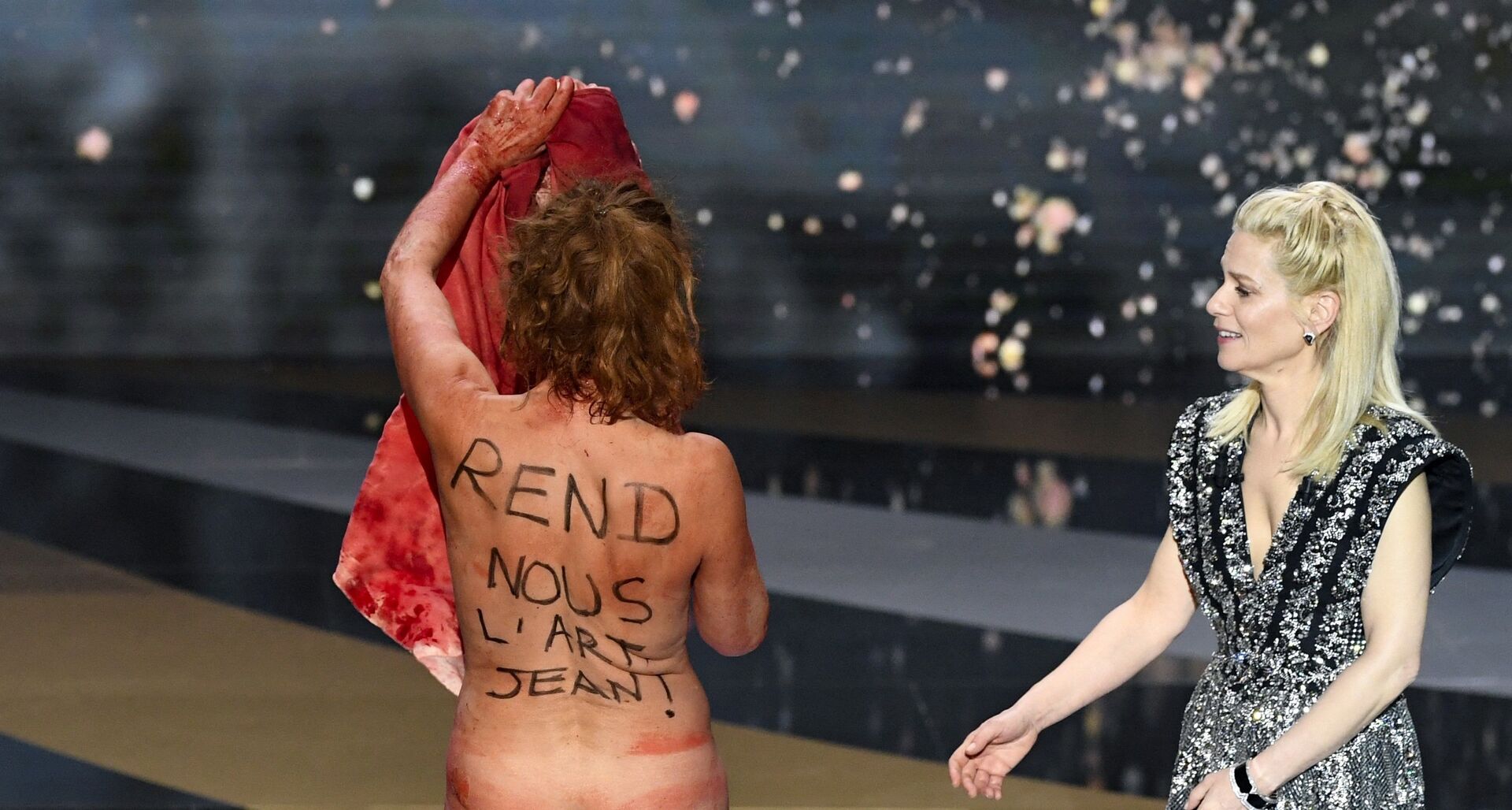 French actress Corinne Masiero (L) stands naked on stage next to French actress and Master of Ceremony Marina Fois during the 46th edition of the Cesar Film Awards ceremony at The Olympia concert venue in Paris on March 12, 2021
© AFP 2023 / BERTRAND GUAY

The actress, who is known for her role as Capitaine Marleau, has expressed doubt that she would be invited to the next year’s ceremony, which is somethig akin to the Oscars in France.

According to Twitter’s feed, her bold move has received some strong support on social media:

“Wake me up when Corinne Masiero is president. Thank you,” one person wrote.

Naked Corinne Masiero presenting a #César is something I would've never expected to see...

French actors, directors, and film technicians have been taking to the streets since last year to oppose the government’s shutdown of cultural venues amid the pandemic, which left the industry workers financially vulnerable. Cinemas, theatres and museums have remained closed in the country since October, even though other businesses have received a green light from the government to re-open in December.

Thousands of protesters marched across France in the past weeks to demand that the government save the cultural sector, France 24 reports, with demonstrators effectively “occupying” four national theatres this Wednesday - including the National Theatre of Strasbourg.