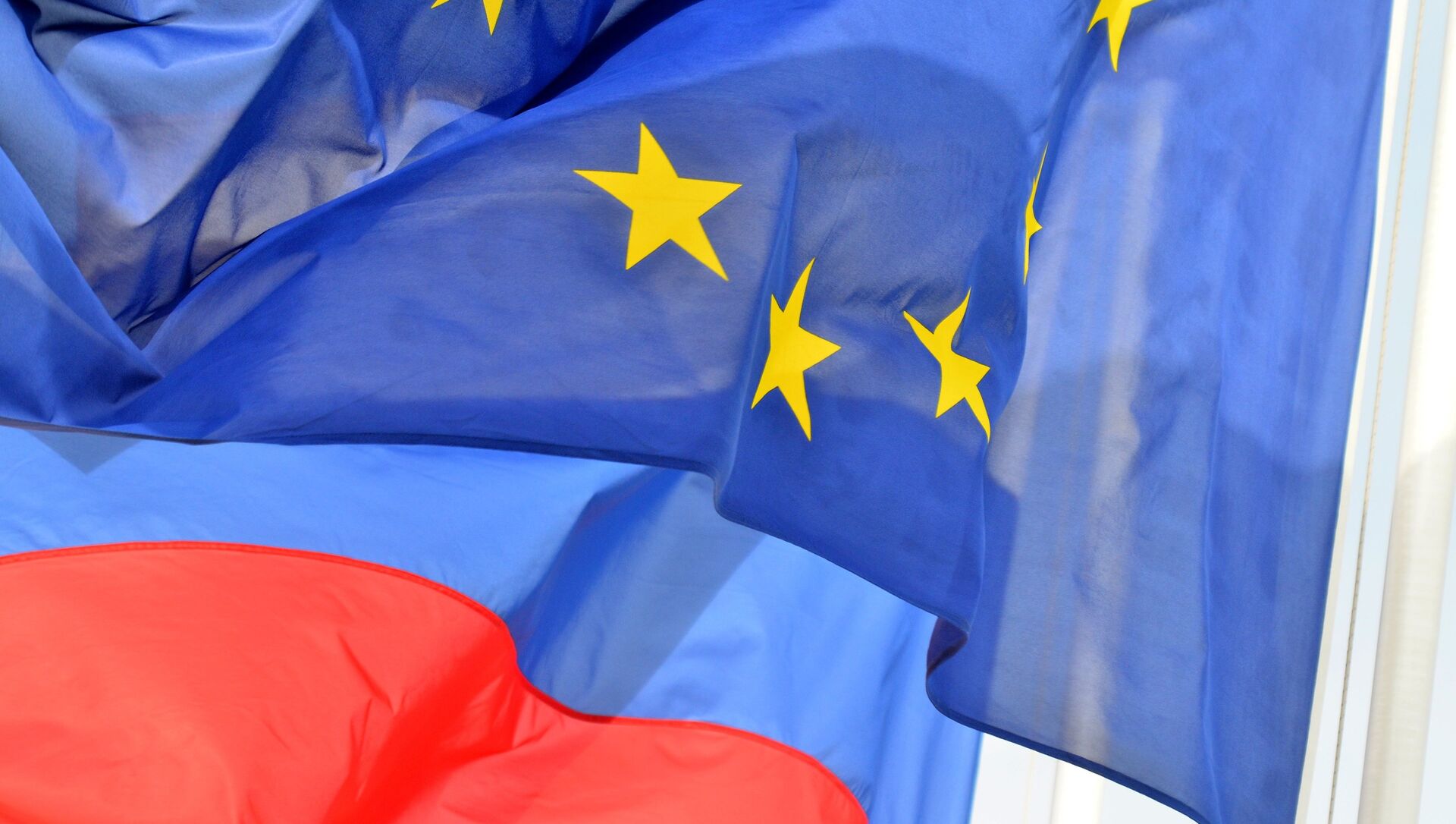 © Sputnik / Vladimir Sergeev
/
Go to the photo bank
Subscribe
MOSCOW (Sputnik) - The European Union may be having a change of heart in its rhetoric towards Russia, with some of the most senior executives in Brussels allegedly advocating a softer approach, Bloomberg reported on Saturday, citing sources familiar with a private meeting recently hosted by EU Foreign Policy Chief Josep Borrell.

According to the media outlet, the Monday dinner was attended by EU Ambassador to Russia Markus Ederer and other senior officials, who reportedly proposed to develop a new plan on Russia, claiming that Europe's stance on Moscow was outdated and too focused on the Ukrainian conflict.

The report noted that such statements could lead to disagreements with some EU member states which maintain sanctions over the 2014 Crimea reunification with Russia and the situation in eastern Ukraine.

Borrell’s spokesperson, Nabila Massrali, declined to comment on the matter, saying the EU foreign ministers agree on the "continued relevance of implementing the five guiding principles, as well as the broader approach of pushing back, constraining and engaging with Russia where needed."

The principles mentioned by Massrali, as cited in the report, include the full implementation of the ceasefire agreements in eastern Ukraine, promoting close ties with Russia’s ex-Soviet neighbours, fortifying against the so-called Russian threats and engaging selectively on issues such as counterterrorism.

Relations between Russia and its European partners took a turn for the worse in 2014 after the leadership change in Ukraine and subsequent Russia's reunification with Crimea after a referendum on the peninsula. Since then, Russia has been under Western sanctions. Moscow has consistently expressed the view that sanctions are counterproductive to EU-Russia relations.

Barros
13 March, 19:58 GMT11
000000
EU such a pathetic joke. They ruined Ukraine in 2014 and left it to hang. Since then, they follow US master instructions for 7 years to spit on Russia. They act all high and mighty with their arrogance and self-righteousness. I say let the bastards continue this way for eternity while Russia, China become the two top superpowers.
4Justice
13 March, 20:02 GMT14
000000
Newsfeed
0
New firstOld first
loader
LIVE
Заголовок открываемого материала
Access to the chat has been blocked for violating the rules . You will be able to participate again through:∞. If you do not agree with the blocking, please use the feedback form
The discussion is closed. You can participate in the discussion within 24 hours after the publication of the article.
To participate in the discussion
log in or register
loader
Chats
Заголовок открываемого материала
Worldwide
InternationalEnglishEnglishMundoEspañolSpanish
Europe
DeutschlandDeutschGermanFranceFrançaisFrenchΕλλάδαΕλληνικάGreekItaliaItalianoItalianČeská republikaČeštinaCzechPolskaPolskiPolishСрбиjаСрпскиSerbianLatvijaLatviešuLatvianLietuvaLietuviųLithuanianMoldovaMoldoveneascăMoldavianБеларусьБеларускiBelarusian
Transcaucasia
ԱրմենիաՀայերենArmenianАҧсныАҧсышәалаAbkhazХуссар ИрыстонИронауОssetianსაქართველოქართულიGeorgianAzərbaycanАzərbaycancaAzerbaijani
Middle East
Sputnik عربيArabicArabicTürkiyeTürkçeTurkishSputnik ایرانPersianPersianSputnik افغانستانDariDari
Central Asia
ҚазақстанҚазақ тіліKazakhКыргызстанКыргызчаKyrgyzOʻzbekistonЎзбекчаUzbekТоҷикистонТоҷикӣTajik
East & Southeast Asia
Việt NamTiếng ViệtVietnamese日本日本語Japanese中国中文Chinese
South America
BrasilPortuguêsPortuguese
NewsfeedBreaking
18:21 GMTWhite House Confirms US Will Not Send Representation to 2022 Winter Olympics in Beijing
17:32 GMTKorean Treat and Eurovision Winner Among Most Mispronounced Words of 2021
17:24 GMTWhitehall Union Claims Victory After Court Dismisses its Case Against Johnson and Patel
17:14 GMTPope Francis Stumbles on Airstair as He Boards Plane in Greece - Video
17:02 GMTTrump’s Social Media Listing Vehicle Says Under Inquiry From US Securities Investigators
16:47 GMTRussia, Egypt Start Naval Phase of 'Bridge of Friendship-2021' Drills in Mediterranean
16:40 GMTUS Reportedly Mulls Cutting Russia Off SWIFT, Sanctioning Energy Producers & 'Putin's Inner Circle'
16:37 GMTFinland’s PM Parties at Nightclub Until 4am After Contact With COVID-Positive Official
16:14 GMTSecond Week of Ghislaine Maxwell Sex Scandal Trial Kicks Off
15:56 GMTBoost for Britain! Is the UK’s COVID-19 Third Jab Campaign Saving Lives?
15:55 GMTWestminster Preparing 10-Year War on Drugs in Attempt to Defeat County Line Gangs
15:44 GMTIsrael Will Reportedly Push US to Strike Iranian Facility Amid Lack of Progress in Vienna Talks
15:41 GMTAmerica Unveils First-Ever Strategy to Battle Corruption at Home and Abroad
15:30 GMTChina May Build Military Base in Equatorial Guinea Amid Beijing’s Tensions With Washington
15:15 GMTKremlin: Putin Will Listen to Biden's Proposals on Ukraine 'With Great Interest'
15:15 GMTNYC to Use 'Preemptive Strike' Against Omicron With Vaccine Mandate for all Businesses, Mayor Says
15:08 GMT3,000 Security Officers Guard India's Mathura as Hindu Group Threatens to Install Idol in Mosque
14:59 GMTAmid Rumours of US Boycott of Beijing Olympics, How Could the Move Affect the Games?
14:52 GMTUK Policing Minister Not Surprised Over Reports of Drug Use in Parliament Building
14:45 GMTLabour Unions Protest in Brussels Against Low Wages, Expensive Electricity - Photos