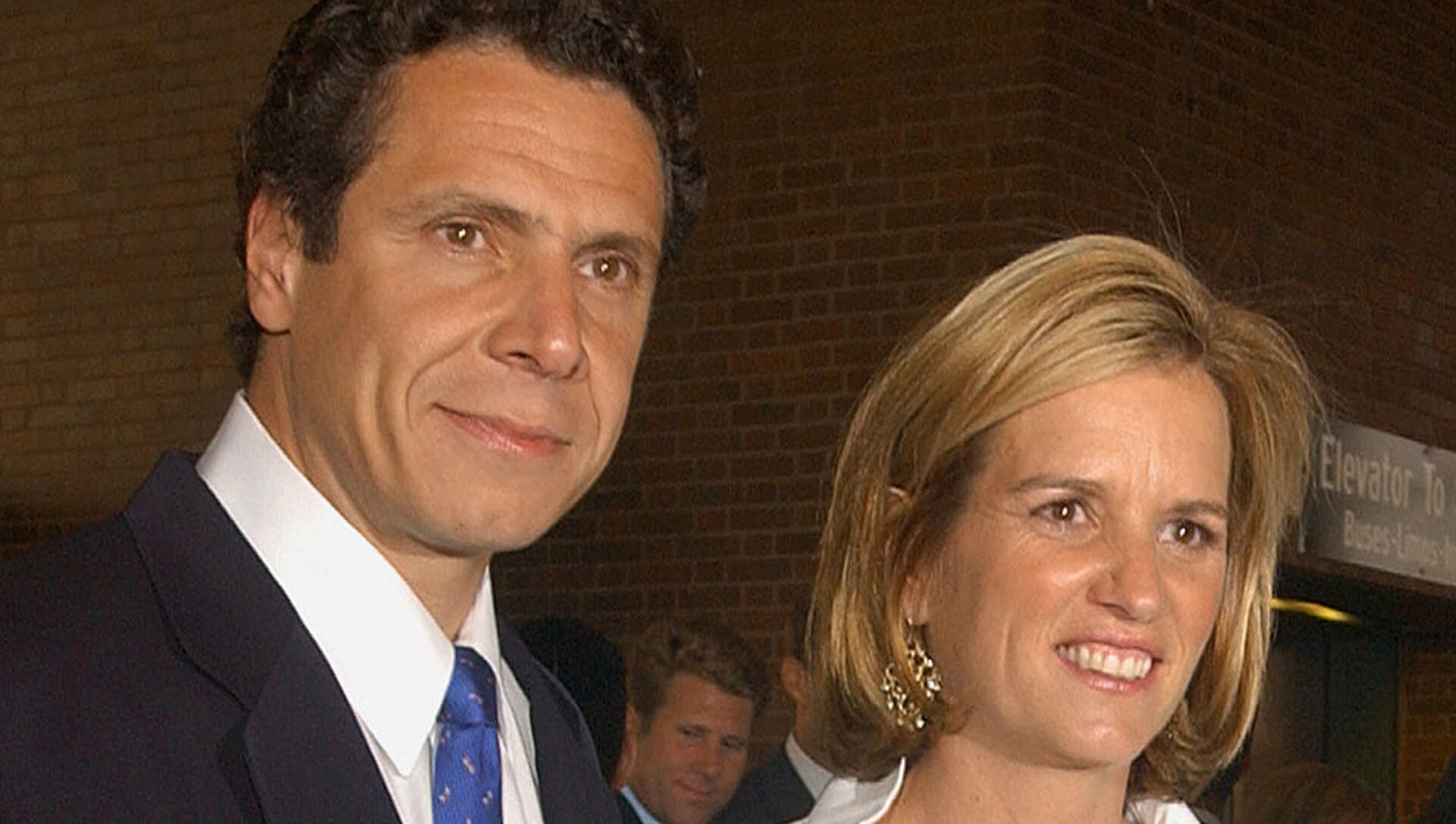 Daria Bedenko
All materialsWrite to the author
The New York state governor, Andrew Cuomo, has been under fire during the last couple of months: firstly, in relation to the scandal with allegedly concealing numbers of COVID fatalities in state nursing homes, later suffering a wave of accusations of sexual harassment from several women.

Michael Shnayerson, a writer behind what he describes as "an unauthorized biography of the governor of New York", asserted in a Friday Vanity Fair story that Andrew Cuomo's ex-wife was among those who allegedly suffered abuse from him.

According to new details, Kerry Kennedy, who was married to Cuomo from 1990 to 2005, "slept in locked bathroom" to avoid abuse from her ex-husband after going through a period of time when Cuomo would not do "the modest things she had asked of him as the father of their daughters" and therefore prompted Kennedy to ask for a divorce.

“Kerry was done being ridiculed and belittled,” said someone close to the couple, cited by Shnayerson. “Either Andrew would work on the marriage or he wouldn’t, and the two would divorce.”

Kennedy demanded a divorce right after Cuomo unsuccessfully ran for governor in 2002. For six months, they lived separate lives, but he refused to leave the house or get in touch with her lawyers. That was the period when she, according to a source close to the family who "recounted instances of physical abuse", had to spend one of the nights in the locked bathroom.

“I’ve been a human rights activist, and for women who have abusive husbands,” Kerry reportedly told a friend, “and here I am enduring this abuse.”

Shnayerson goes on to say that, after the divorce was announced, Cuomo, fearing for his career and aiming to "punish" Kennedy, leaked to the press that she had an affair with "a Republican polo player". He then pushed to ruin her plans and displayed bullying behaviour, according to the story.

“He [was] constantly sticking it to her,” the source said later, “telling her he can’t make Christmas plans until December, so she can’t make hers. There’s a million ways for a single parent to make the other parent’s life miserable, and he played that game.”

A spokesman reached by Vanity Fair to comment on the story, slamming it as "rumours".

"Time has proven them all false. Andrew is a great father, and his daughters will be the first to say that Kerry and Andrew have been great co-parents—and time showed those who spread the rumors‎ were actually the problem", the spokesman said. 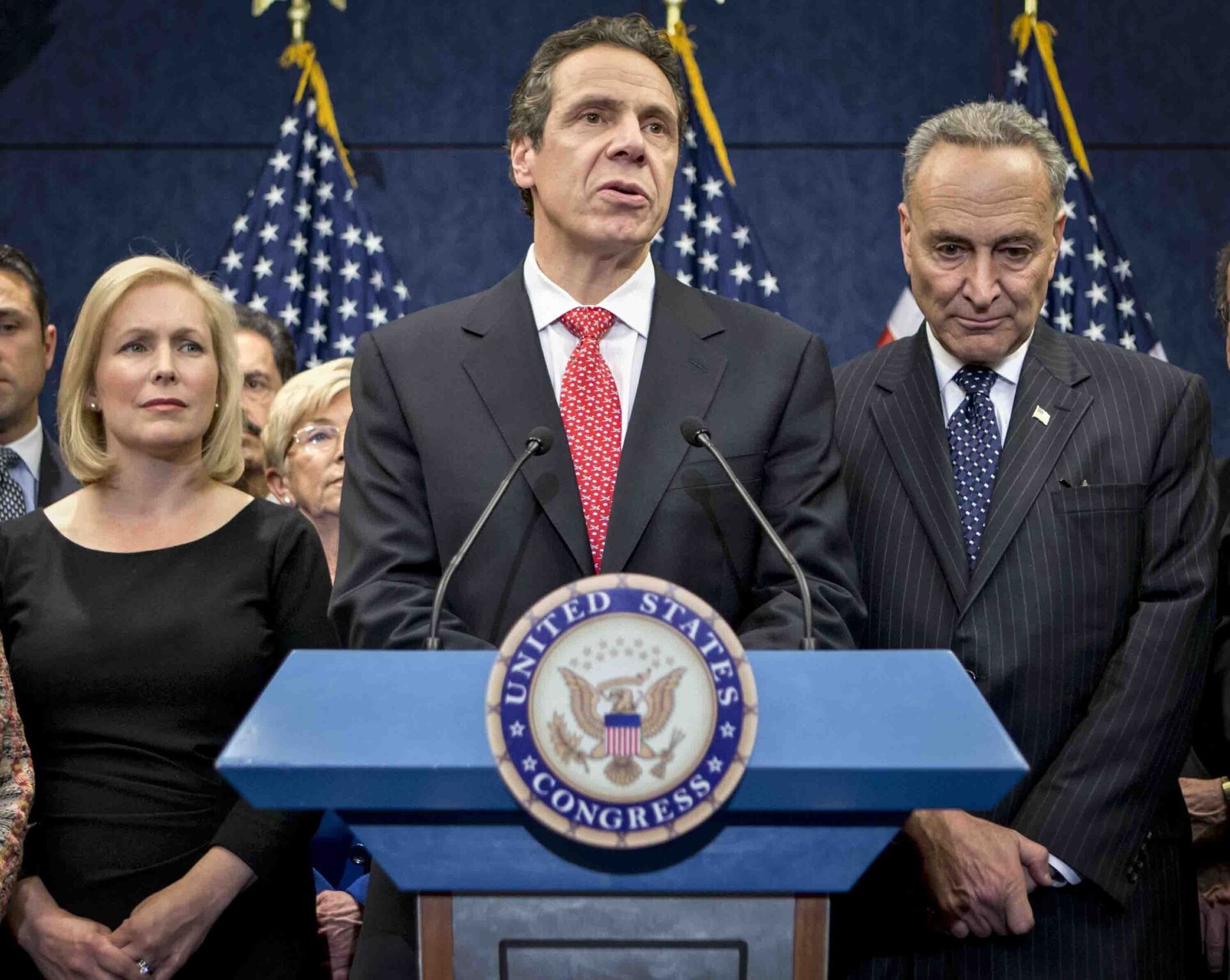 n this Dec. 3, 2012, file photo, New York Gov. Andrew Cuomo is joined by the New York Congressional delegation including, Sen. Kirsten Gillibrand, left, and Sen. Charles Schumer, right, for a news conference at the Capitol in Washington. Schumer and Gillibrand on Friday, March 12, 2021, are calling on Cuomo to resign, adding the most powerful Democratic voices yet to calls for the governor to leave office in the wake of allegations of sexual harassment and groping.
© AP Photo / J. Scott Applewhite

Shortly after his administration faced accusations of hiding the true numbers of coronavirus-caused fatalities in New York state nursing homes, Cuomo landed in hot water as he was bombarded with allegations of sexual harassment from former aides.

The first to share her story was Lindsey Boylan, who alleged that the governor suggested that they play strip poker and later gave her an unwanted kiss.

Boylan's move has opened a Pandora's box, with five more women stepping forward with their own stories, where for some there were just compliments and undesired flirtation, and others claimed that Cuomo groped them.

The governor continues to battle the accusations, vehemently denying that he harassed anyone and calling for citizens to await the results of the official investigation into claims that were launched shortly after the arrival of Boylan's story.

"I did not do what has been alleged. Period," Cuomo said. "I won't speculate about people's possible motives, but I can tell you, as a former attorney general who has gone through this situation many times, there are often many motivations for making an allegation."

As the harassment scandal has unfolded, many have called for Cuomo's resignation - a move he refuses to make, confident of his innocence. Amid that, some lawmakers have raised the possibility of the governor's impeachment.