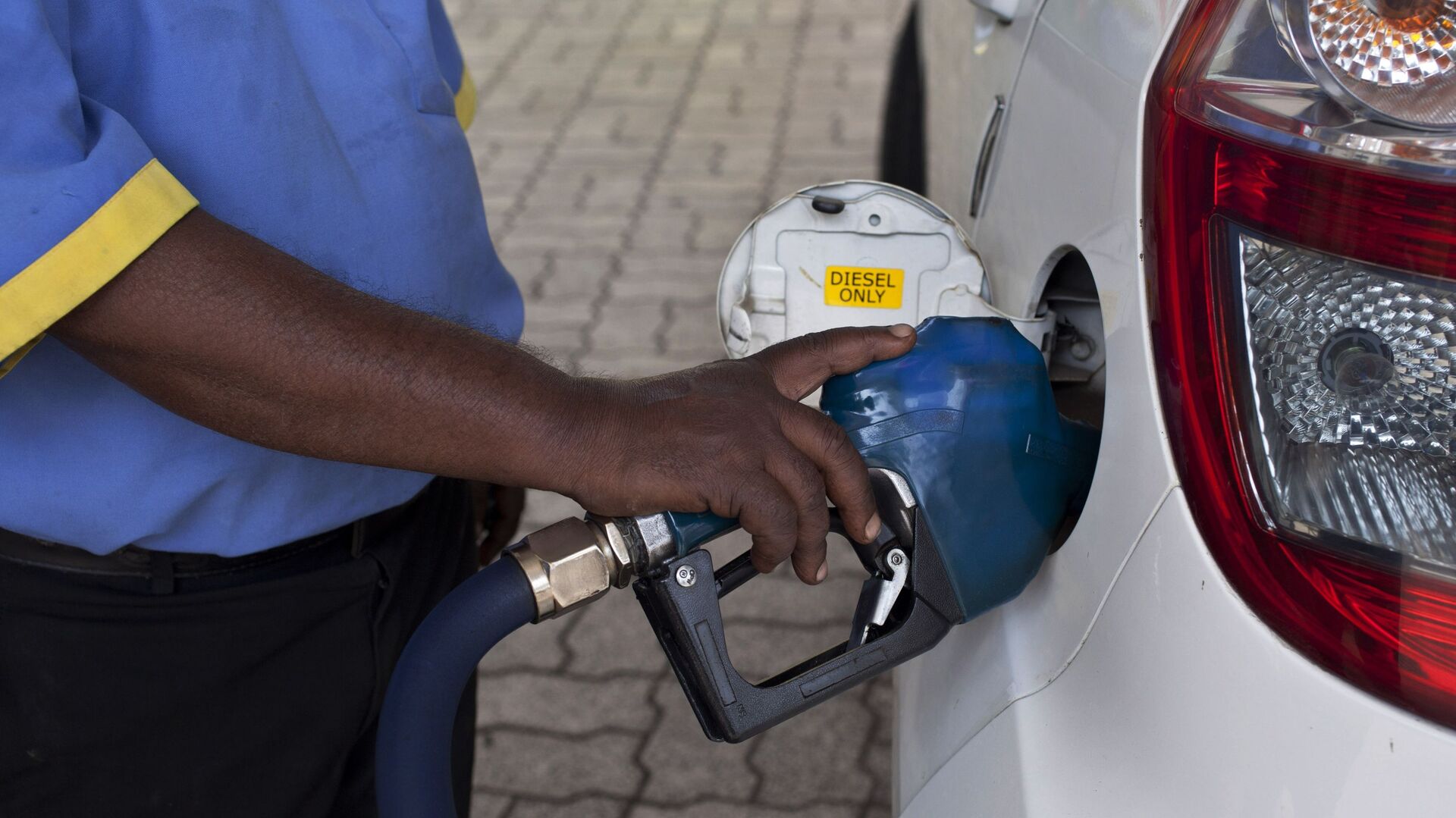 Rishikesh Kumar
All materialsWrite to the author
Almost three-quarters of India's population (70 percent) live on less than $1000 a year which is why inflation has played such a vital part in former elections. Now, with petrol above INR 100 ($1.4) a litre, people are wondering why the government is so insensitive as to keep fuel prices high while five major states gear up for crucial polls.

Surendra Dubey, who owns 20 lorries in Delhi, says his earnings have dropped by 20 percent since the beginning of this year. Lal Keshwar Yadav, a farmer who grows pulses and rice in Bihar and is depends heavily on diesel pump for irrigation, is worried he might not make any profit for the second consecutive year. Last year, people such as Dubey and Yadav suffered heavy losses because of the pandemic lockdown across the country; this year, the phenomenal spike in fuel prices has added to their woes.

"There is huge competition in our industry and most of the lorry owners are driving just for maintenance. In 2020, we hardly drove for five months. If we keep our lorries parked, they will slowly start to rust," Dubey said, sharing his agony with Sputnik.

Retail prices in Delhi for diesel - the lifeline of India’s economy - have jumped around 50 percent in the past year and the price of petrol has passed the INR 100 ($1.4) per litre mark in several states while the cost of a litre of diesel is inching towards this grim record. 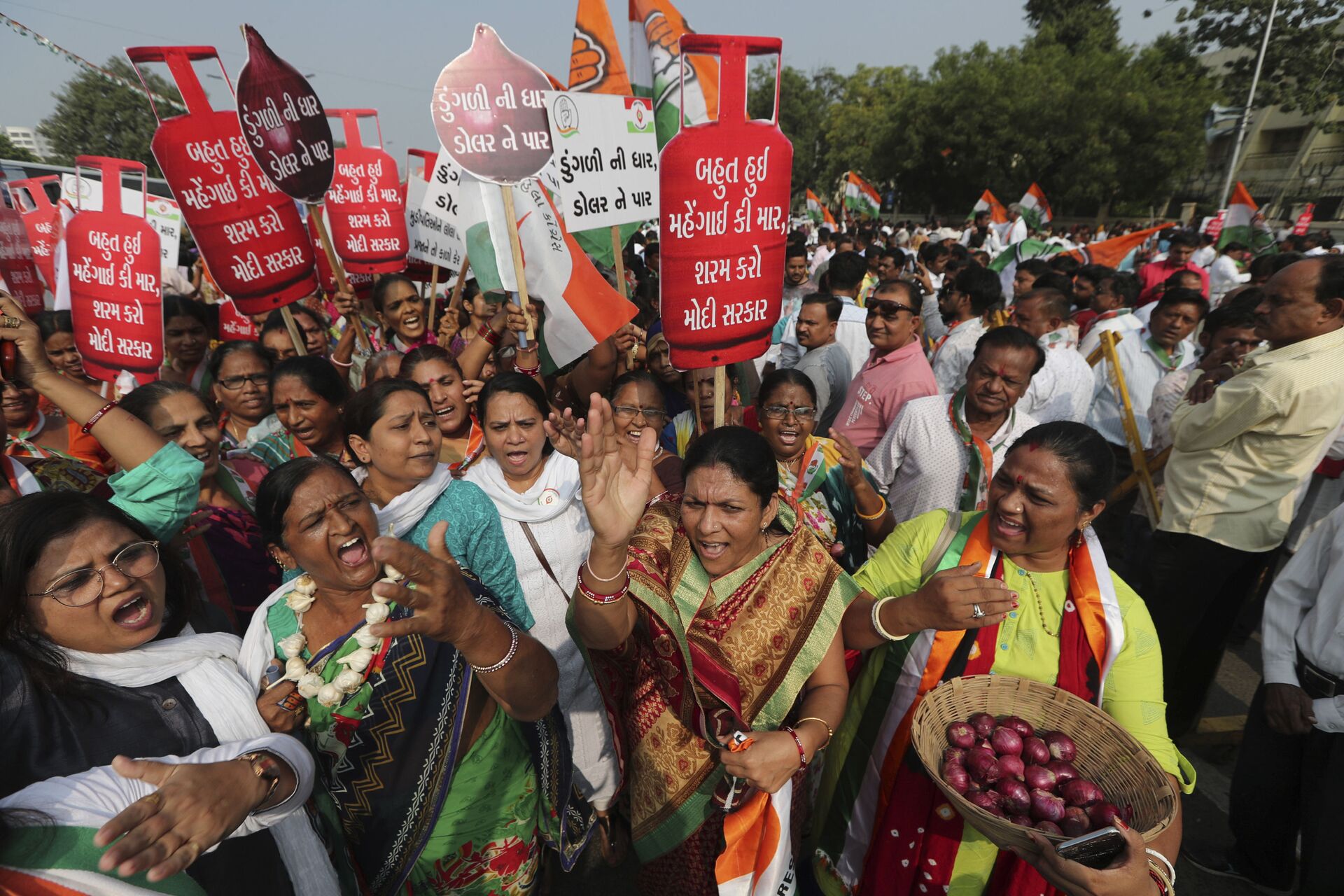 The protest against unemployment, rising inflation and, what they call, the government's anti-people and anti-farmer policies. India (File)
© AP Photo / Ajit Solanki

Higher retail fuel prices lead to higher transportation costs which in turn lead to higher food prices. Although global inflation fell steeply in 2020 because of poor demand, India’s consumer price inflation in the year rose and averaged 6.6 percent, one of the highest in the world. Thus, reducing the purchasing power of Indian consumers who spend around 40 percent of their income on food.

“Enabling a phased unwinding of high indirect taxes on petrol and diesel – in a coordinated manner by centre and states – is essential for preventing further build-up of cost-pressures in the economy,” Shaktikanta Das, the governor of the country's central bank, the Reserve Bank of India, said during the latest monetary policy meeting.

However, recent statements from ministers in the Modi government seem to indicate that the government is deaf to the concerns of the public despite urgent appeals from opposition parties and Governor Das himself to cut fuel prices and give some relief to consumers. The Prime Minister, Narendra Modi, and oil minister Dharmendra Pradhan have blamed the high prices on previous governments and production cuts by some oil-exporting nations.

The finance ministry, headed by Nirmala Sitharaman, is heavily dependent on fuel taxes - which now make up nearly a fifth of New Delhi’s gross tax take - to fund the government’s expenditure in the present financial year.

India entered the COVID-19 pandemic with poor government balances compared with other emerging economies. In early 2020, it was staring at a high combined (centre + state) fiscal deficit of more than 8 percent of gross domestic product (GDP) and a government debt-to-GDP ratio of more than 70 percent. As a result of prolonged and strict lockdown and the complete collapse of economic activity in the first half of the 2020/21 financial year, India’s fiscal deficit and government debt are expected to rise to 13 percent and 90 percent of GDP, respectively.

“Borrowing more to stimulate the economy was not something the government was very keen on. They opted for the easier choice of not passing on the benefits of lower global oil prices to the Indian consumer by raising excise duty on petrol and diesel. Although international crude prices were down 22 percent in 2020, retail fuel prices in India rose 13 percent. Excise duty collection in India is expected to rise from 1.2 percent of GDP in FY20 to 1.9 percent of GDP in FY21,” Uday Tharar, an economist at American investment and asset management firm GMO, told Sputnik.

The stakes are potentially immense for the governing Bharatiya Janata Party in five states — Tamil Nadu, West Bengal, Kerala, Assam and Puducherry — where elections are being held in coming weeks. Opposition parties Trinamool Congress, Indian National Congress and communist parties are making capital on the issue of fuel prices at different platforms - including in parliament - and in turn they expect voters’ support in the forthcoming assembly elections.

“As far as reluctance to reduce taxes despite elections in five states is concerned, we need to understand the political game - the federal setup. The states where elections are scheduled are ruled by parties that are part of the opposition in the central government. It gives both the parties an opportunity to blame each other for not reducing taxes. Had the election been in a BJP-ruled state, we could have seen some reduction,” Professor Sudhanshu Kumar said, adding that the political party which can communicate with voters better way while blaming the opponent for the high cost of oil will have the upper hand in the elections.

Asia
Setback for Modi's BJP as Kashmiri Parties Lead in First Election After Losing Special Status
So far, the BJP seems to be gaining the edge by successfully blaming the imposition of higher oil taxes on state governments.

Professor Kumar adds that the share of petroleum products in the headline consumer price inflation that is used for policy purposes is only 2.4 percent. Also, on average, petrol and diesel account for only 5.6 percent of household expenses in India.

“As the economy has diversified over the years, the direct impact of increasing fuel prices on the economy has reduced. However, the psychology of increased prices comes into play through higher-than-expected inflation which translates into rising inflation over time. This may be considered a supply shock to the economy,” Kumar added.

The taxes raised on petroleum products are indirect taxes which are considered regressive.

“The impact of rising prices is felt more by the lower income group as the tax component as a share of income is higher for them than for the rich. The lower middle-income class seem to be more affected as economic slowdown has squeezed the income of a large section of them,” Kumar emphasised.

“India’s incremental spending by the government post COVID-19 stands at less than 2 percent of GDP, one of the lowest in the world. Though the move of raising fuel taxes looks prudent from a fiscal point of view, it did not provide the much-needed stimulus to the economy and somewhat delayed India’s economic recovery,” the economist Uday Tharar said.

Also, record fuel prices combined with high economic uncertainty - because of the pandemic  - deter consumers from buying two-wheelers or upgrading from two-wheelers to cars. This in turn is a drag on consumer spending.